Accessibility links
Pakistan's 'Massive' Plan To Keep Families From Going Hungry During COVID-19 Shutdown : Goats and Soda As incomes dry up for low-paid Pakistanis during the COVID-19 crisis, the government is massively expanding a program that gives cash to the out-of-work. But concerns are being raised about its reach.

Pakistan Has A Plan To Keep Millions From Going Hungry During Shutdown. Will It Work?

Pakistan Has A Plan To Keep Millions From Going Hungry During Shutdown. Will It Work? 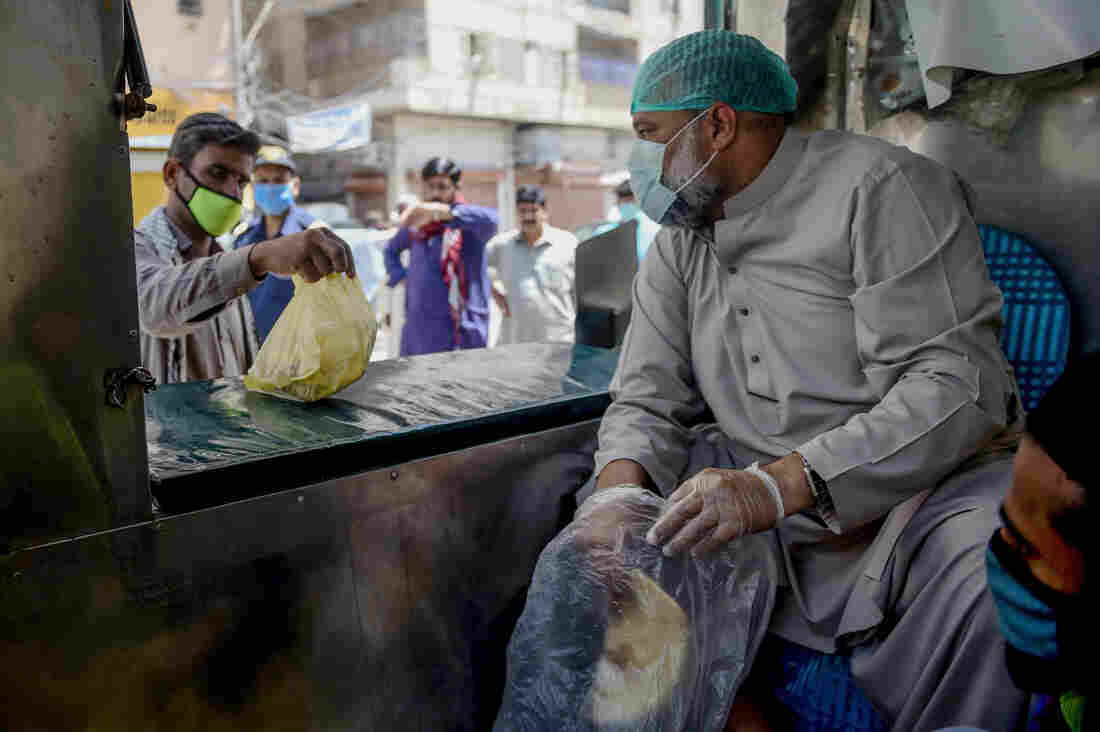 A municipal worker in Karachi hands out bags of food — part of government efforts to help those who've lost their livelihood during Pakistan's lockdown to stem the spread of the coronavirus. Rizwan Tabassum/AFP via Getty Images hide caption 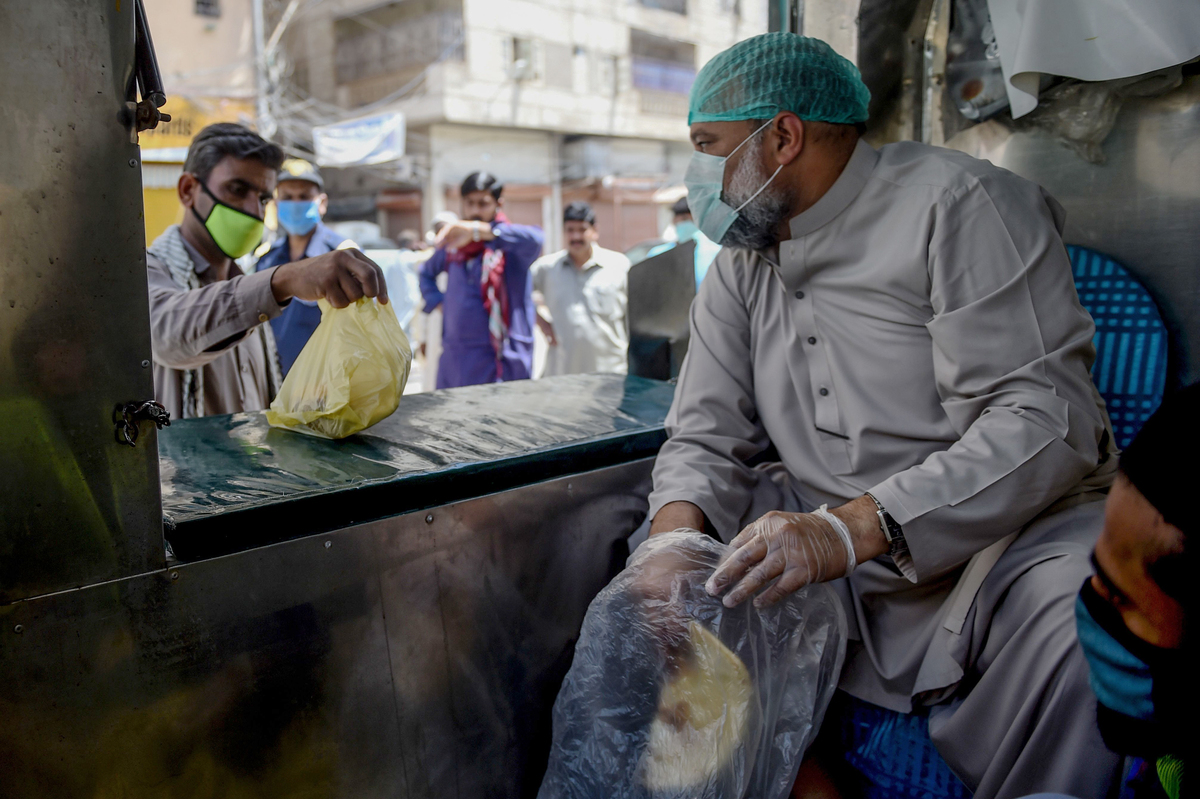 A municipal worker in Karachi hands out bags of food — part of government efforts to help those who've lost their livelihood during Pakistan's lockdown to stem the spread of the coronavirus.

After hours of pounding the pavement, plaintively warbling his flute, Mohammad Azem finally attracted a small crowd to watch his performing monkey dance to his music on an upscale Islamabad street.

A woman begging door-to-door and two security guards watched his monkey dance, the bells on his leash ringing as Azem pounded a little drum. Ending the show, the monkey saluted and placed a tin can on his head for change.

"Monkey money," Azem crooned. A guard tossed in the equivalent of 60 cents. It was all Azem earned on that recent Sunday — far from the days before the pandemic when he could make $5 in tips. "The day before yesterday my kids went to sleep without eating," he says.

Azem — and his small crowd — were in violation of stay-home orders that have been rolled out across Pakistan. Since late March, all essential industries have been shuttered to curb the spread of the coronavirus, and people in urban centers must stay home.

As a result, incomes have dried up for many Pakistanis who rely on low-paid work to survive. While there are more than 5,300 cases of COVID-19 as of Monday, the more immediate concern for these people is not becoming sick, but going hungry. The government is trying to help by distributing cash to millions of families, but there are concerns that people will fall through the gap.

"I don't want to get coronavirus, but when I see my kids like this, I can't stay home," says Azem. "I go out and work with the monkey. Maybe I'll get some money."

One driver who recently lost his job was begging by a thoroughfare on a recent day, alongside his pregnant wife. At a sprawling market in suburban Islamabad, out-of-work laborers ate biryani rice that a donor passed around in foam packs. More than a dozen more waited about, hoping for some charity.

Passersby and aid groups have been distributing cooked meals and packs of food to men like them, who gather around roadsides. Among them was Ibrahim, a 48-year-old mason. He said the men used to wait here for work, before the pandemic.

"People feel very ashamed," Ibrahim says. "When corona started, we cannot earn our money honestly. We [are] becoming in people's eyes as beggars. It's too much hard."

For that reason, laborer Mohammad Fayyaz Khan carried his shovel as he waited by the roadside for charity. The shovel signaled to people that he was a hard-on-his-luck laborer, not a professional beggar. He patted the pocket of his tattered pants. He had about a dollar left — if motorists didn't stop and give him food, he'd buy bread. "I'll eat a piece in the morning and a piece in the evening."

Social Distancing Is A Distant Dream In Pakistan's Urban Slums

In Pakistan, where the informal sector accounts for more than 70% of all jobs, the government estimates that at least 8 million people have been affected by the shutdown. Their plight has prompted Prime Minister Imran Khan to say in many of his pandemic-related addresses that he did not approve of widespread shutdowns.

"Our economic situation is very fragile," Khan said on March 17 as cases climbed to more than 200 people. "If we close down the country, what will happen to the poor? People will die of hunger here."

To assist those Pakistanis whose incomes have dried up, last week the government began unrolling a one-off payment of about $70 to 12 million families. That's about about a third of all Pakistani households, according to Mosharraf Zaidi, a columnist who also runs Tabadlab, a think tank advocating for progressive government policy. The amount is roughly equivalent to the monthly wage of an unskilled urban laborer.

Those 12 million families represent a near-tripling of recipients of a modest social welfare plan run by the government known as the Ehsaas Program. Until the pandemic, it was distributing about $12 a month to Pakistan's poorest 4.5 million families. To expand the program, local officials have asked other officials in villages and districts to identify people in need.

Those in need can also apply online and through SMS messages, according to Sania Nishtar, the special adviser to the prime minister who oversees the program.

"Pakistan has never, ever, experimented with a social protection instrument on this size and scale, in terms of the amount of money, in terms of the number of people that this is going to benefit," he adds.

But concerns remain of people falling through the gaps, including among the one-third of Pakistani men and women who are illiterate. Khan, the laborer, says he did not know how to apply for the program.

"People told me that my name should be on the list," Khan says. "I don't know. I can't read or write. If they pay, that's great."