Accessibility links
To Keep Coronavirus From Spreading, Pakistan Limits Mosque Worshippers. But Many Are Defiant : Goats and Soda Pakistani authorities have called for a maximum of 5 worshippers in a mosque. Many in the religious community disagree — and the issue will only become more heated as Ramadan approaches. 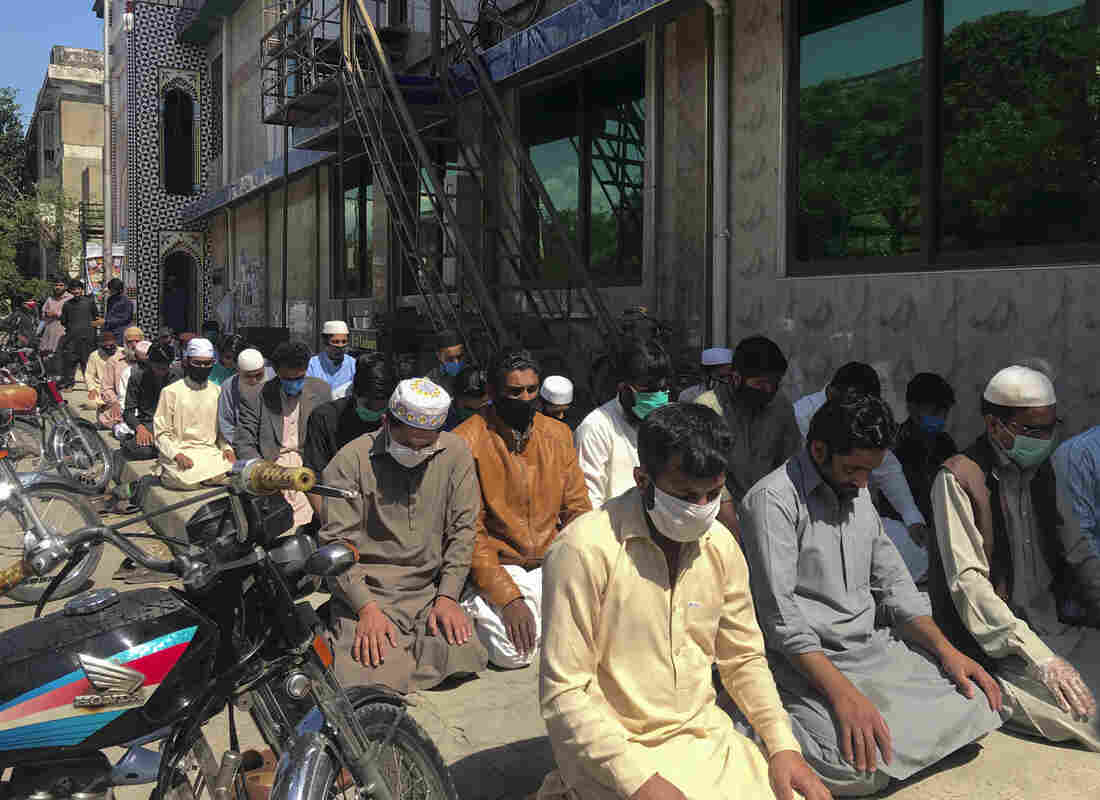 Dozens of worshippers outside the Haidari Mosque in the Pakistani capital of Islamabad. Diaa Hadid/NPR hide caption 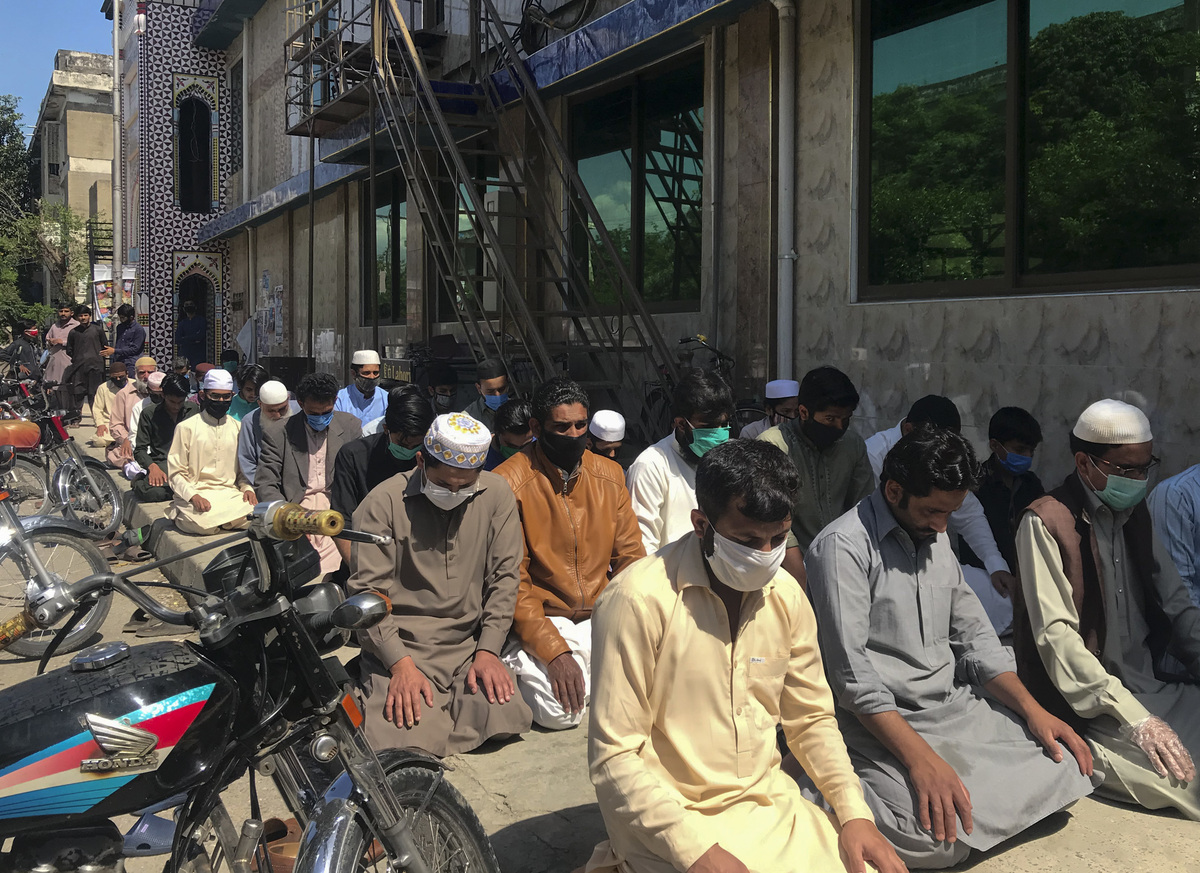 Dozens of worshippers outside the Haidari Mosque in the Pakistani capital of Islamabad.

Dozens of worshippers milled outside the ornate Haidari Mosque in the Pakistani capital Islamabad, in violation of lockdown orders on a recent Friday in April. The muezzin called to prayer, but they couldn't enter.

"As you can see the administration has closed down the mosque," said Mohammad Zubair, a 28-year-old government servant.

In late March, authorities across Pakistan ordered mosque administrators to limit Friday congregations to just five people as part of a broader ban on public gathering and lockdowns to curb the spread of the coronavirus. Pakistan has more than 7,000 confirmed cases and more than 135 people have died.

But on April 10, Zubair thought the limitations on worshippers wouldn't be enforced. After all, it was sneakily flouted the week before. On April 3, worshippers locked the front door to make it appear that there was nobody inside, but they all sneaked in through an unlocked door on a side street,

This time, stranded outside, Zubair and other worshippers crammed shoulder-to-shoulder on the sidewalk and prayed. Military police in an open-backed jeep slowly drove by – but didn't stop.

The order to curb congregations has only been spottily enforced, and it points to a particular issue in Pakistan: limiting group gatherings for worship is not easy to do in this deeply religious country.

Worshippers question why authorities have ordered mosques to effectively close, while other parts of the shutdown are loosened or only loosely enforced. "People crowd vegetable markets. Government offices," Zubair complained. "So — there's only corona in mosques?"

Sometimes, the resistance has been violent. On April 10, worshippers in the port city of Karachi assaulted a policewoman trying to block them from entering a mosque. A video of the event shows the officer shouting, "They attacked me! They tried to murder me! They broke my glasses!"

Many of Pakistan's clerics have also defied authorities, largely by allowing prayers to continue unhindered, particularly in out-of-the-way mosques, despite the order to limit congregations.

Sometimes, the defiance is pointed. For three weeks in a row, at one of the country's most hard-line mosques, cleric Maulana Abdul Aziz proudly ordered hundreds of men to cram together for communal Friday prayers. Police initially tried to stop Aziz but backed off, fearing conflict with worshippers, local media reported.

Part of the defiance stems from the fact that clerics see mosques as power bases for projecting their influence, said Madiha Afzal, Rubenstein Fellow at the Brookings Institution and author of Pakistan Under Siege: Extremism, Society, and the State. "The clerics see people not going into the mosques physically as a manifestation of weakened power," she said. Their defiance of government orders was saying "look, our domain of control is the mosque and you cannot take this domain of control away from us."

Those calls for defiance will likely get louder as the holy Muslim month of Ramadan approaches. It's expected to start on the evening of April 24. And traditionally, believers flock to mosques to read the Quran through the day and pray through the night.

The Prime Minister Imran Khan acknowledged that the government would have to rethink its current order to limit congregation to five people as the holy month begins. Khan said he'd consult clerics about a new policy, "and inshallah, before Ramadan, we will let you know how we can strike a balance between the two," he said in a televised address – that is, between prayer and the pandemic.

The clerics however, did not wait. Right after Khan spoke, some of Pakistan's most prominent clerics held a press conference to say they'd no longer respect the order to limit congregations. One of those clerics, Mufti Taqi Usmani, said worshippers would soon fill the mosques for Ramadan.

"Muslims must be in the mosques in Ramadan and pray in congregation during this time of trial," insisted the cleric. Perhaps there, he said, "worshippers may pray to God to end the outbreak that was sent by Him."

His call was echoed by prayer-goers in another Islamabad mosque on Friday, April 17, including Omar Ayyad, a 55-year-old electrician. Interviewed outside the building, Ayyad said he plans to pray in congregation in the mosque during Ramadan. "I think the government will take a decision," he said, to ban prayers, "but the people's reaction will be different," he said. And then he walked into the crowded mosque.