Accessibility links
Bad Bunny And Other Global Artists Sing About Coronavirus Prevention : Goats and Soda They're using music to raise awareness about COVID-19 — and how to reduce its spread. Researchers say that songs can help transmit important information during a disease outbreak. 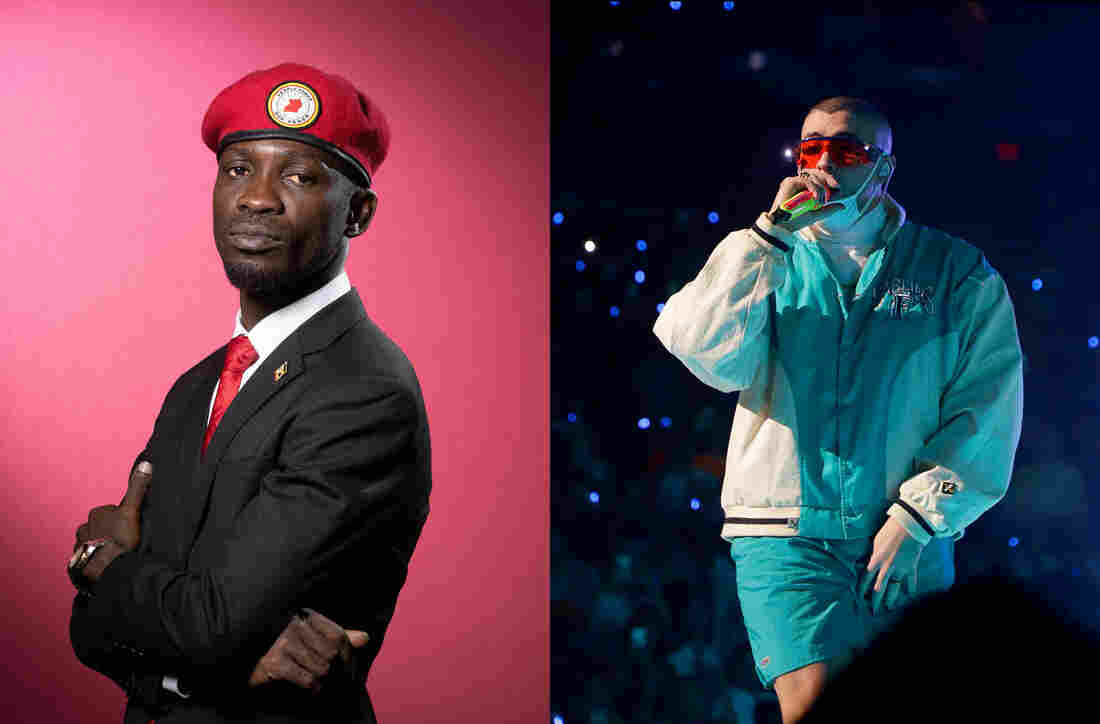 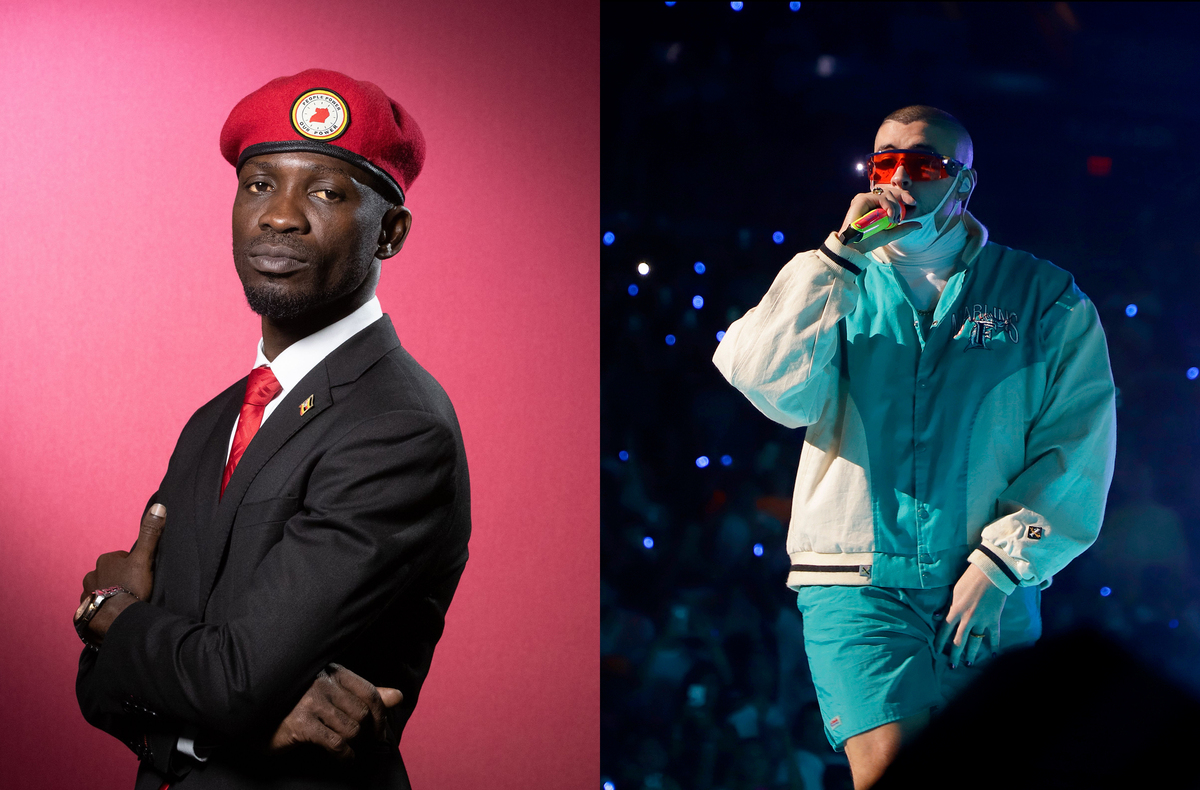 When Cardi B went live on Instagram last month to tell her fans they should be taking COVID-19 seriously, a Brooklyn DJ laid her speech over a beat and turned it into an iTunes success.

The song — "Coronavirus Remix" — is one of thousands of examples of how artists around the world are using music to spread awareness about the pandemic. Researchers say that in an outbreak, songs about a disease can do more than entertain and uplift — they can transmit important health information to a large number of people quickly and make the message stick.

Carlos Chirinos, a professor at New York University, saw this happen during the 2014 Ebola crisis, with songs like "Ebola is Real" and "Africa Stop Ebola."

"If songs are catchy, they're packaging information [about the disease] in three minutes," he says. "And if people like the song, they're likely to repeat it and listen to it again and again."

Chirinos is seeing the same musical phenomenon in the coronavirus pandemic and has been collecting songs for his research. From Vietnam to Uganda and Panama, here's a sampling of trending COVID-19 anthems from around the world.

In Vietnam, the Ministry of Health rewrote the lyrics to the 2017 hit song "Ghen" by Min and Erik — originally about a jealous ex — into a PSA about the coronavirus. Renamed "Ghen Cô Vy," the new version sparked a choreography from dancer Quang Đăng demonstrating the correct way to wash your hands: under the nails, around the thumbs, between the fingers.

The dance racked up more than 5 million views on the choreographer's YouTube channel and took off on Tiktok, generating a #ghencovychallenge with more than 31 million hashtag views. In the videos, people replicate Đăng's moves as the song reinforces that you should avoid touching your face and lather up with soap for 20 seconds before rinsing off your hands.

In early February, Hong Kong performer Kathy Mak released a spoof of the song "Torn," the '90s hit by Natalia Imbruglia, that pokes fun at the paranoia of the pandemic.

"I sterilize, I sanitize/ My hands are always freaking dry," she sings. "There's just so many things that I can't touch/ I'm torn."

A lot of listeners share her sentiments. Two different videos of the song have racked up over a million views combined.

In Senegal, hip-hop collective Y'en a Marre has collaborated with the country's health ministry to create a song in French called "Fagaru Ci Coronavirus" or "Shield Against Coronavirus."

Since its March 19 release, the song and accompanying music video — featuring the group wearing medical gear and rapping in a hospital — aims to educate people on the threats of COVID-19 while encouraging compliance in prevention tactics.

The group, which is known in the country for rallying young people around social justice issues, promotes solidarity. One of the lyrics: "Soutenons nous mutuallement et combettons le tous ensemble" or "Support each other and fight it all together."

Ugandan reggae artist and political activist Bobi Wine recently spoke out against what he says is the failure of African governments to invest in their health-care systems — so he released an upbeat jam on March 25 called "Corona Virus Alert" amid a growing number of cases in the country.

With lyrics like "serious fever is a symptom/ dry cough is a symptom/ even sneezing is a symptom," it provides instructions for what to do if you feel sick and encourages people to take the disease seriously. He points out that everyone must do their part in sanitizing and social distancing to stop transmission of the disease. So far, the song has racked up over a million views on YouTube.

Salsa musician and former presidential candidate Rubén Blades is a source of national pride for Panamanians. The artist, who recorded the best-selling salsa record of all time in 1978, honed in on the sentiment of patriotism on March 26 with a song and music video called "Para Panama," or "For Panama."

The song frames staying home as a statement of solidarity for the country's well-being. And it pays homage to health-care workers with lines like: "Arriesgan su vida para socorrernos/ eso no se olvida/ y hay que agradecerlo" or "They risk their lives to help us/ that can't be forgotten/ and has to be appreciated."

The music video also features crowd-sourced videos of Panamanians singing along to the song's chorus in their homes as a symbol of gratitude for the country's doctors and nurses.

International rap star Bad Bunny broke Billboard records earlier this year with the highest charting all-Spanish-language album in history — but now the Puerto Rican artist is switching gears from singing about the club to telling his young audience to stop going out and practice social distancing.

On the SoundCloud track titled "En Casita" or "At Home," he sings: "Yo que te quería ver/ pero no se va poder/toca quedarme en casa," translating to "I wanted to see you/ but that won't be possible/I have to stay home."

With more than one million streams on the song since its April 4 debut, Bad Bunny's lyrics also emphasize that although it can be annoying to feel stuck inside, it's a necessary sacrifice for vulnerable populations — especially given that Puerto Rico is the U.S. territory with the most older Americans per capita.

Is there a COVID-19 song you can't stop listening to? Send us an email goatsandsoda@npr.org.