Accessibility links
Coronavirus Crisis In Ecuador May Be Worse Than The Number Show : Goats and Soda Hospitals and doctors are overwhelmed. So are funeral homes and cemeteries. "You feel powerless," said one doctor tending to 200 patients. 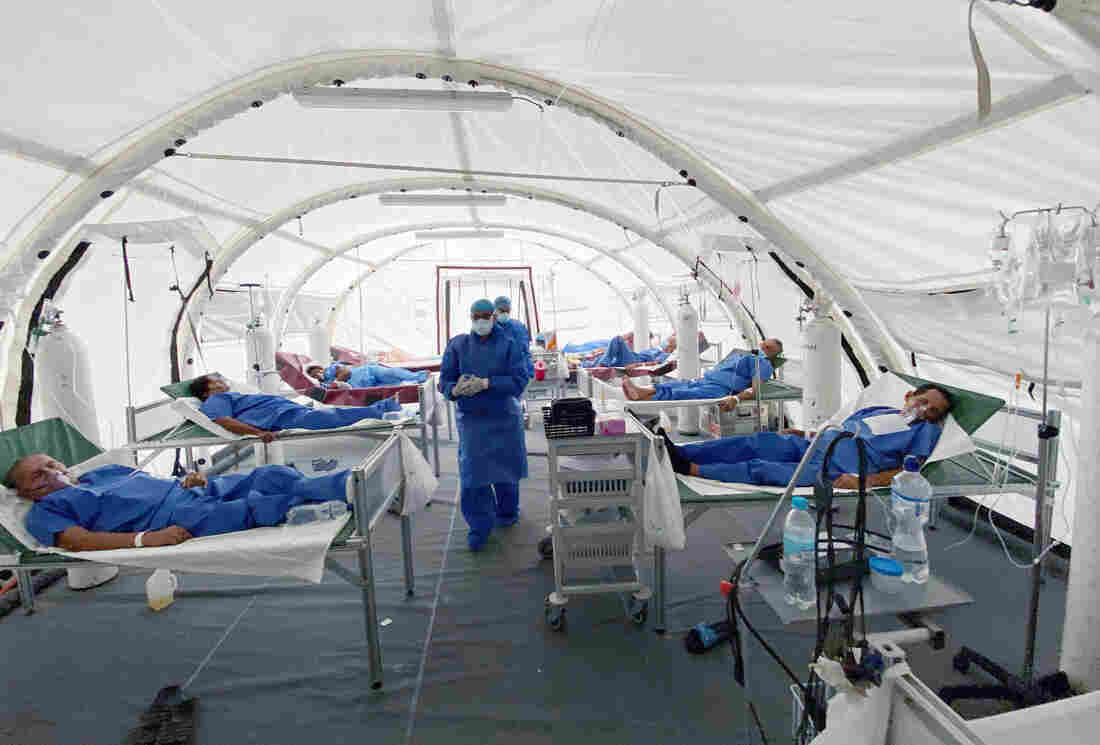 Patients are treated for COVID-19 at a field hospital in Guayaquil, Ecuador. Enrique Ortiz/AFP via Getty Images hide caption 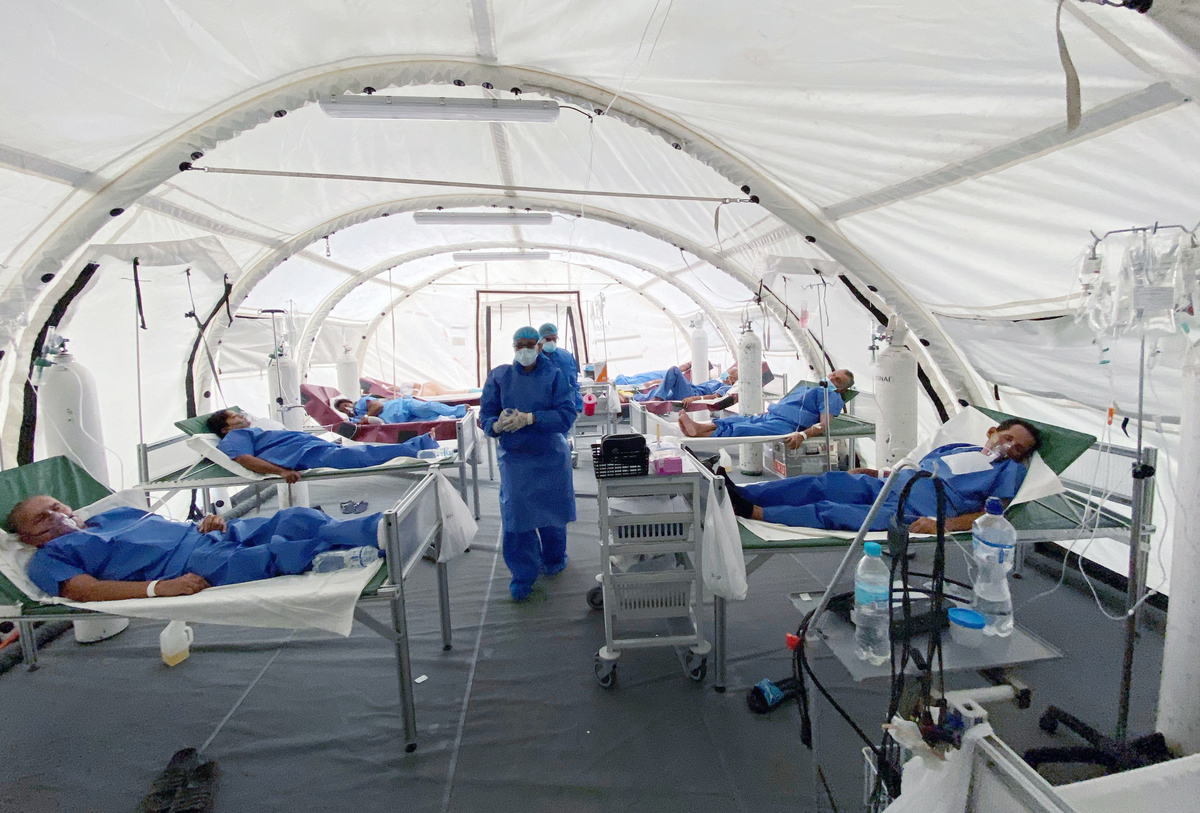 Patients are treated for COVID-19 at a field hospital in Guayaquil, Ecuador.

Ecuador has one of the highest rates of COVID-19 in all of Latin America – with 10,128 cases and 507 deaths in a country of just 17 million people.

But the situation may be far worse than what the official numbers show. In fact, one Ecuadorian official says it appears that thousands more people may have died of the disease than his government is reporting.

Jorge Wated, who heads a government task force charged with collecting and burying bodies in Guayaquil, the epicenter of the outbreak, said that in the first 15 days of April, 6,703 people had died from either COVID-19 or natural causes. Previous to the coronavirus outbreak, he said, the monthly figure was around 1,000.

"This is the hard reality we are dealing with," Wated said in a nationally televised address.

And Interior Minster María Paula Romo has admitted that the true death count is higher but blamed a lack of widespread testing for the discrepancy. Even President Lenín Moreno has dismissed the official figures.

"We have to tell the truth," he said in a speech last month. "We know that in terms of both infections and deaths, the numbers are too low. There is not enough testing."

The legions of sick are running doctors ragged, especially in the Pacific port of Guayaquil which is Ecuador's largest city and home to about 70 percent of COVID-19 cases.

Dr. Eduardo Herdocia, who is just 18 months out of medical school, says he is currently taking care of about 200 patients whom he believes are infected with coronavirus, based on their respiratory symptoms. But due to lack of testing, only about two dozen have been diagnosed as positive. Because Guayaquil's hospitals are overflowing with confirmed CV patients, Herdocia makes house calls.

"Many of these patients need hospital care but the hospitals – the whole health-care system – is full," says Herdocia, who is 26. He says that with the help of relatives or taxis, "they drive around the city all night looking for a hospital but there's no room."

Herdocia can't keep up with all the phone pleas for medical attention from his patients. By the time he arrives at their homes, some of them have already died.

"You feel powerless," he says.

Guayaquil's emergence as a coronavirus hothouse stems from several factors.

Many Ecuadorian exchange students and migrant workers living in Italy and Spain – countries devastated by COVID-19 – returned to the city in March for spring break and public health officials believe that.some may have been infected. Guayaquil is home to sprawling slums where many residents live hand-to-mouth and routinely violate a government lockdown announced on March 17 in order to work.

"It's very hard to tell them to stay home," said Dayanna Monroy, a TV journalist in Guayaquil, who says many parts of the city bustle with people and traffic.

The result is overwhelmed hospitals, morgues, funeral homes and cemeteries. Due to bottlenecks in collecting the dead, people were wrapping the bodies of deceased relatives in plastic and bed sheets and, in some cases, moving them outside when the bodies began to stink in Guayaquil's very hot climate. So the bodies lay on the streets for days. 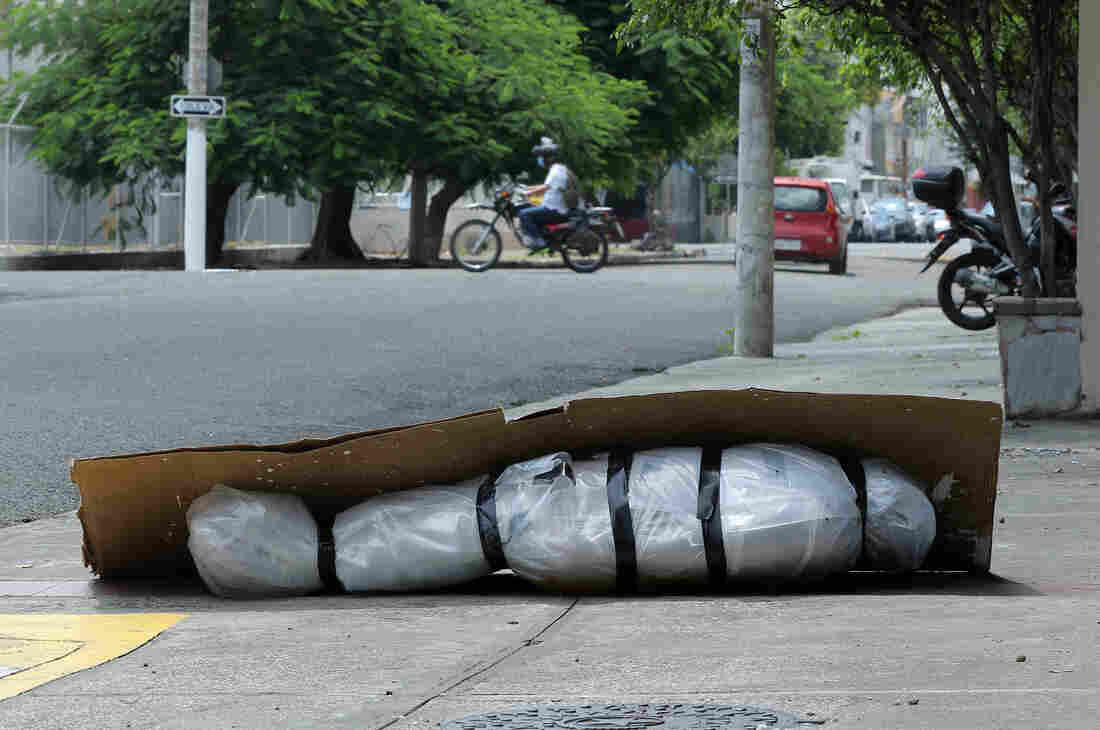 An abandoned corpse lies on the sidewalk in Guayaquil, Ecuador, on April 6. Due to bottlenecks in collecting the dead, people were wrapping the bodies of deceased relatives in plastic and bed sheets and, in some cases, moving them outside because of the odor. Francisco Macías/Getty Images hide caption

"There were more than 300 cadavers inside houses," Wated tells NPR. "Some of the dead had been there three, four ... even five days."

The government has now ordered soldiers to take the bodies to cemeteries, such as Parques de la Paz, one of Guayaquil's largest. At the start of the crisis cemetery manager Alfredo Bravo says he was taking in the same number of bodies in a single day as his normal monthly capacity of 273 bodies.

By government edict, COVID-19 victims are supposed to be cremated to avoid spreading the infection. But Bravo's crematorium can only handle eight bodies per day, so most are buried. The cemetery has one backhoe to excavate dirt and bury bodies but had to rent three more, says Bravo. The worst part of his job is that, to avoid infection, Bravo has to block relatives of the dead at the cemetery gates.

"I feel really bad," he says, "because people can't bury or say goodbye to their loved ones in the proper fashion."

Wated, the task force leader, said there are relatively few cases of COVID-19 in the rest of Ecuador and compared Guayaquil to Wuhan, the Chinese city where the outbreak started. He defended the government's response to the coronavirus emergency and said it is ramping up testing.

But he declared: "No South American country was prepared for this."