Accessibility links
World Health Organization: Its History, Its Mission, Its Role In The Current Crisis : Goats and Soda The organization at the eye of the coronavirus pandemic is taking heat from U.S. critics. Here's a look at its history, its mission and its role in the current crisis. 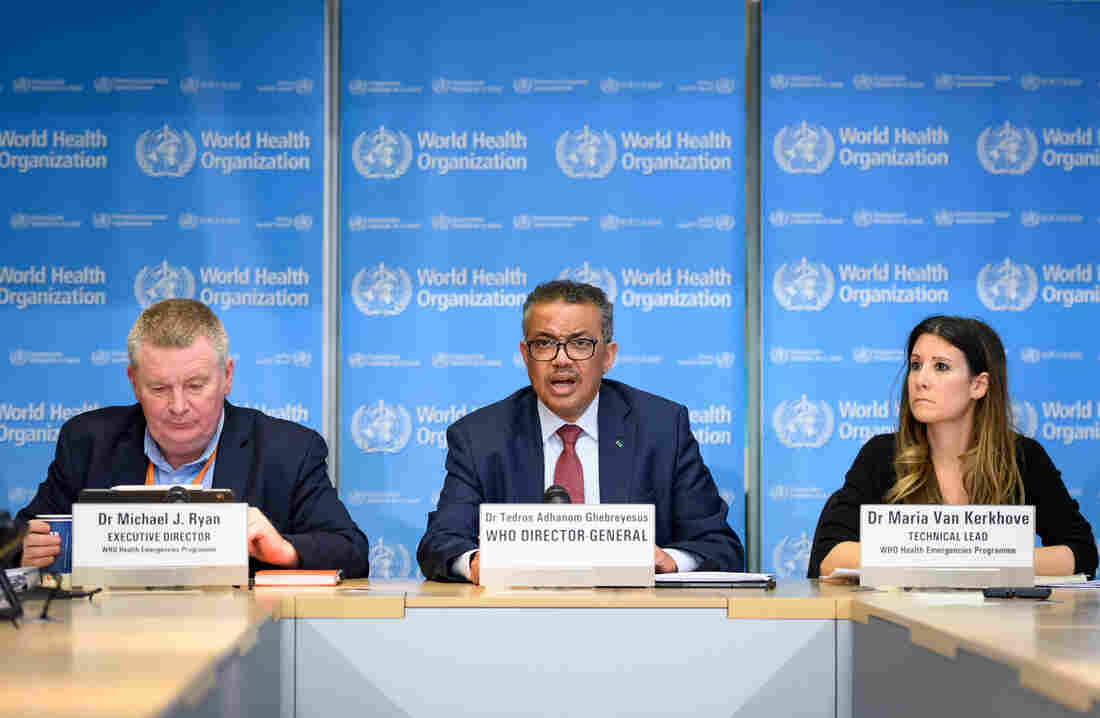 World Health Organization leaders at a press briefing on COVID-19, held on March 6 at WHO headquarters in Geneva. Here's a look at its history, its mission and its role in the current crisis. Fabrice Coffrini/AFP via Getty Images hide caption 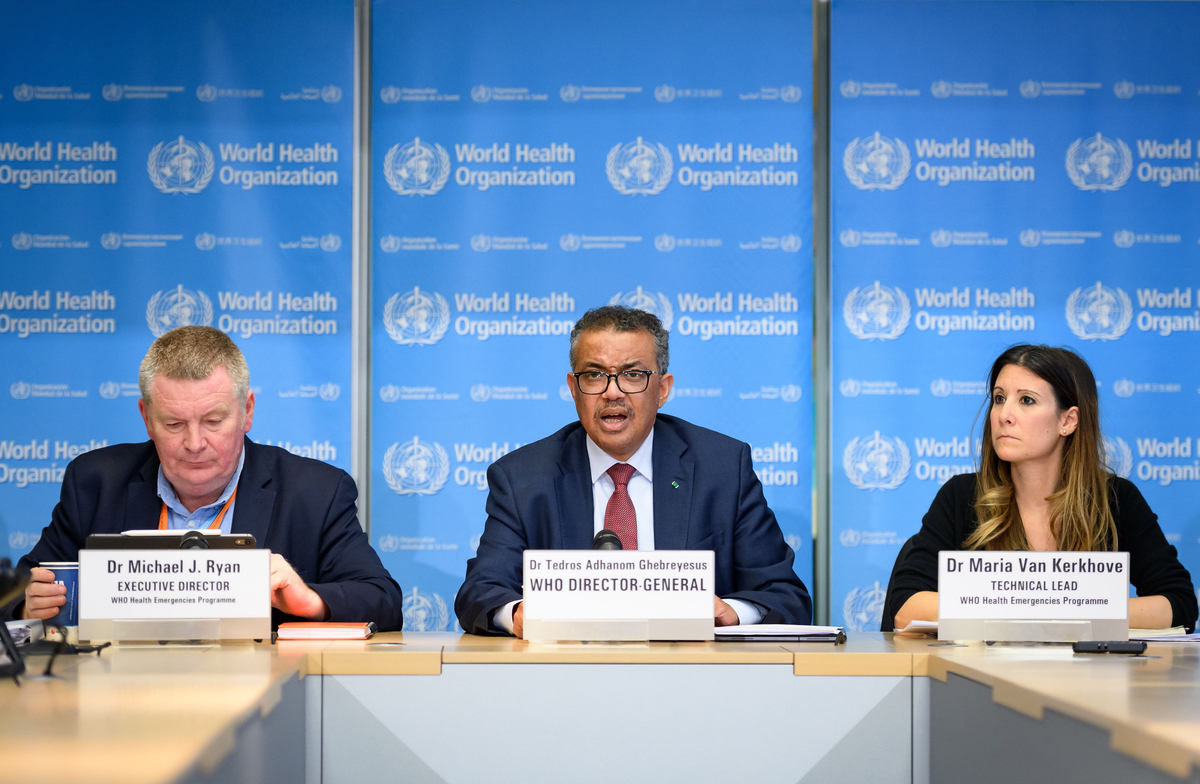 World Health Organization leaders at a press briefing on COVID-19, held on March 6 at WHO headquarters in Geneva. Here's a look at its history, its mission and its role in the current crisis.

The World Health Organization describes its job as "the global guardian of health."

It is now possibly facing the most devastating global health threat in its 72-year history: the coronavirus pandemic. WHO is devoting hundreds of millions of dollars and an all-hands-on-deck approach to the effort to vanquish the virus.

And it is being accused of failing to uphold its mission.

On April 14, President Trump put a temporary halt on U.S. funding for the agency, pending an investigation to see if WHO is "severely mismanaging and covering up the spread of the coronavirus."

On May 18, Trump sent a letter to the agency's director-general, Tedros Adhanom Ghebreyesus, vowing to end U.S. funding for and participation in the world body if WHO fails to "commit to major substantive improvements in the next 30 days."

Here's a look at the agency at the eye of the storm.

How did it start? 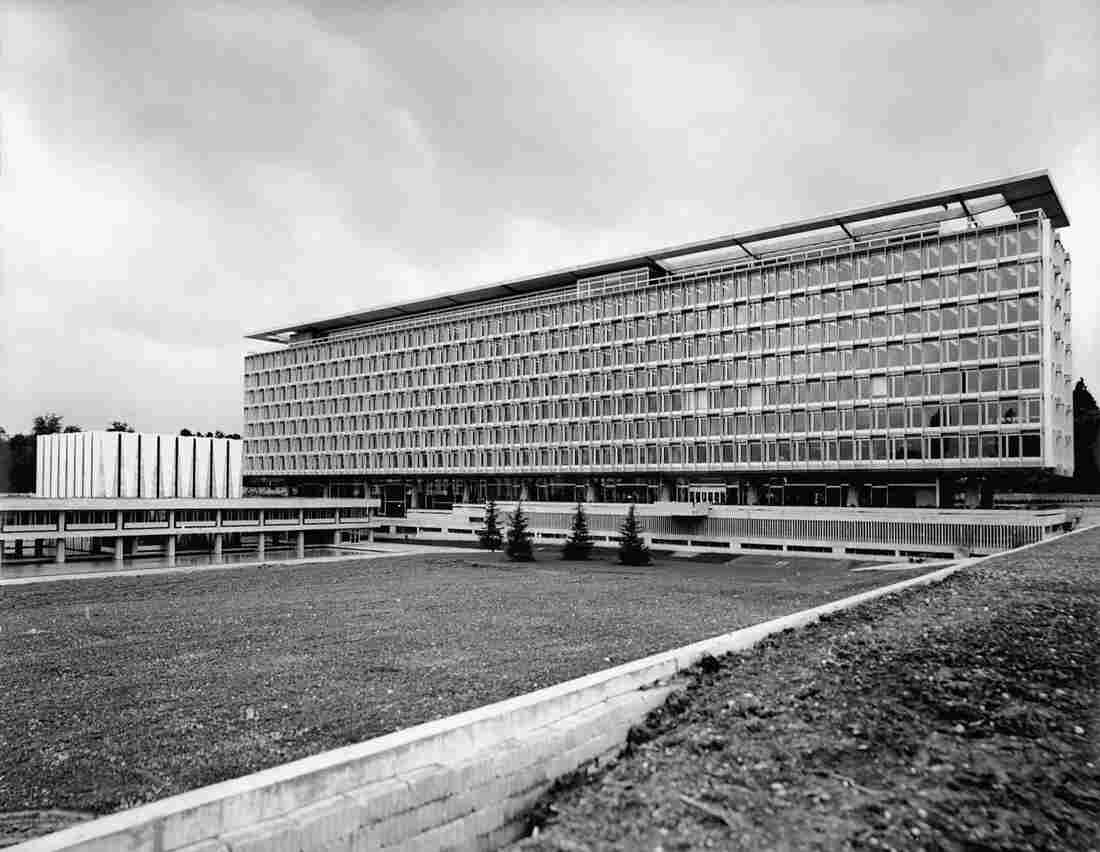 As World War II was winding down, countries came together to form the United Nations and voted to create a global health agency as a U.N. arm.

And so in 1948 the World Health Organization was founded for "the attainment by all peoples of the highest possible level of health." As a specialized agency of the U.N., WHO has as its directive "to act as the directing and coordinating authority on international health work," according to the agency's constitution.

WHO replaced several regional health authorities that had been established in Europe and the Americas in the early 1900s to help prevent the spread of diseases such as smallpox and typhus. WHO started with 55 member states and has now grown to include 194 member states and two associate members (Puerto Rico and Tokelau).

The member states form the World Health Assembly, which sets WHO policy, approves and supervises its budget, and elects a director-general to lead WHO for five-year terms. Its budget is set for two-year periods and stood at $6.3 billion for 2018 and 2019. The money comes from dues and voluntary contributions from member states as well as money from nonprofit groups such as the Bill and Melinda Gates Foundation (which is also a funder of NPR and this blog) and Rotary International.

For its COVID-19 response, WHO initially requested $675 million from donors and plans to significantly increase the amount to fund its services providing "advice, supplies and leadership" in the pandemic.

WHO has a staff of 7,000 that includes scientists, medical doctors and public health specialists, as well as experts in economics, statistics and emergency relief. The agency is headquartered in Geneva and has offices in more than 150 countries around the world.

The current director-general is Tedros Adhanom Ghebreyesus, a former minister of health in Ethiopia. He is WHO's first leader from Africa and its first director-general who is not a physician — Tedros has a Ph.D. in community health. He started his term in 2017.

What is WHO's mission?

At a press conference on April 22, Michael Ryan, director of WHO's Health Emergencies program, summed up the organization's overarching mission: "The mandate we have [is] to establish global standards and to give strong advice to countries regarding rational public health measures."

To achieve these goals, WHO does not typically give out grants or loans or send doctors and others from its staff to countries to provide hands-on medical treatments.

Rather, "what it does do is get on the ground to provide direction, advice, help trace disease outbreaks and provide additional support when needed," says Jennifer Kates, director of global health and HIV policy at the Kaiser Family Foundation.

One of WHO's primary roles is to provide countries with science-based recommendations for health policy, which are often published on its website. "There will be guidelines on what kind of essential medicines there should be, what kind of essential diagnostics there should be, what might be the regimens to use in relation to HIV in different countries, taking into account the resources available," says Rifat Atun, professor of global health systems at Harvard University, "Countries are not under any obligation legally to follow these guidelines, but many do in relation to epidemics."

WHO is governed by its member states — it does not have legal authority to enter countries without permission or to force countries to take its advice.

For instance, in February, WHO sent international experts to China on a "joint mission" with Chinese researchers to look into the steps the country was taking to prevent and control the spread of COVID-19. WHO emphasized that the mission was agreed to by both parties, and that the members were invited by both WHO and China.

What is WHO's role in the COVID-19 pandemic?

Under the International Health Regulations, a global legal agreement revised in 2005 and signed by all WHO members, countries are required to report to WHO any disease outbreaks that are unexpected or of unknown cause and have significant risk of international spread.

China reported a cluster of pneumonia cases to WHO on Dec. 31, 2019. "Based on the [International Health Regulations], what is expected from WHO is declaring the Public Health Emergency of International Concern as early as possible," Tedros said on April 22.

That PHEIC designation is an official alert that triggers a set of responses. WHO can help guide the country and gauge whether its response is effective. And it can bring in international assistance for training, surveillance and other measures. But all of this can only be done "at the request of a State Party."

Timing is tricky. "It's partly a technical decision. It's partly a political decision," Atun says. "If you act too early, you may contain the epidemic but people may say, 'There was no need [to act so early].' But if you act too late countries will say, 'You are too late and we're now facing the consequences.' "

WHO declared the coronavirus a PHEIC on Jan. 30, when there were no reported deaths outside of China but a sharp increase in the number of countries reporting cases.

"Looking back, I think we declared the emergency at the right time, and when the world had enough time to respond," Tedros said on April 22.

Weeks later, in its role as an international standard-bearer, WHO officially named the disease COVID-19.

In the months since, WHO has requested information that countries are bound to provide under international health regulations — for instance, explanations of why travel bans are needed to stop disease spread. WHO has also asked countries — including China — for timely and accurate outbreak data that they're required to provide under the international health regulations.

Drawing from publications and discussions with researchers globally, WHO has published reams of COVID-related public health advice on topics ranging from diagnostic tests and the public use of masks to how religious leaders can assess the risks of holding social and religious gatherings during Ramadan and how countries can manage risks as they lift their lockdowns. The agency has also developed online courses to train health care workers to diagnose and treat COVID-19 patients.

WHO has sent more than 70 teams of response coordinators, epidemiologists and other advisers into countries to help guide COVID-19 responses. It is also raising money for and organizing a global COVID-19 supply chain to get diagnostic tests, medical equipment and aid workers to places that need them. "We estimate this supply chain may need to cover more than 30% of the world's needs in the acute phase of the pandemic," Tedros said at a press conference April 10, calling on donors to support the initiative.

And the agency is helping to organize global research into treatment drugs and potential coronavirus vaccines. In February, WHO brought medical doctors, virologists, modelers and epidemiologists together in a global research forum to establish a unified set of priorities and timelines for COVID-19 research. On April 24, WHO announced a pledge campaign for global collaboration asking researchers, donors and manufacturers to agree to work together and commit to equitable distribution of vaccines and medicines.

Performance over the years

WHO's handling of the SARS (severe acute respiratory syndrome) outbreak in 2003 was considered a success. "WHO acted fairly quickly and issued guidance to restrict travel. The epidemic did not extend to all countries in the world," Atun says. Effects of the SARS outbreak were concentrated in Asia; 8,000 people were sickened, and around 800 died before the epidemic ended in 2004.

But the concerns raised over WHO's current performance are not the first criticisms for a WHO response to a health emergency.

In the 2009 H1N1 swine flu pandemic, WHO received mixed reviews. In post-pandemic analysis requested by WHO, an international committee found that, while WHO provided useful guidance to countries on how to slow pandemic flu transmission and helped monitor the virus's spread, its messaging around the severity of the pandemic was unclear and its failure to coordinate effective vaccine distribution led to countries receiving them too late to be truly helpful.

And the WHO response to the 2014 Ebola outbreak in West Africa was widely panned. "[In] the Ebola outbreak, the WHO was criticized for not responding quickly enough in declaring a public health emergency of international concern," says Raphael Lencucha, a global health researcher at McGill University. WHO initially dismissed the scale of the problem, then lacked the staff and funds to lead an effective response, NPR reported in 2015.

"[Back then,] the focus was on the WHO in responding in a timely way," Lencucha says. "And in the case of COVID, similar criticisms are being waged."

Now, U.S. officials say WHO was too trusting of China in the beginning stages of the COVID-19 pandemic and slow to sound the alarm. On April 15, President Trump said the organization's earlier "objections" to travel bans from China was "a horrible, tragic mistake" that resulted in "quickly unleashing the contagion around the world." Secretary of State Mike Pompeo says China withheld timely information about the outbreak from WHO, which means to him that "the World Health Organization's regulatory arm clearly failed during this pandemic."

WHO officials say they welcome "after-action" assessments of their performance in emergencies. "We do them for every outbreak response and I'll look forward ... to look and see where we can learn to do better, where we can improve our response," WHO official Michael Ryan said on April 15.