Accessibility links
Trump Is One Of Many Public Figures To Propose Questionable Coronavirus Remedies : Goats and Soda President Trump is one of many leaders and entrepreneurs, past and present, who have put forth untested and even potentially dangerous proposals during a health crisis. 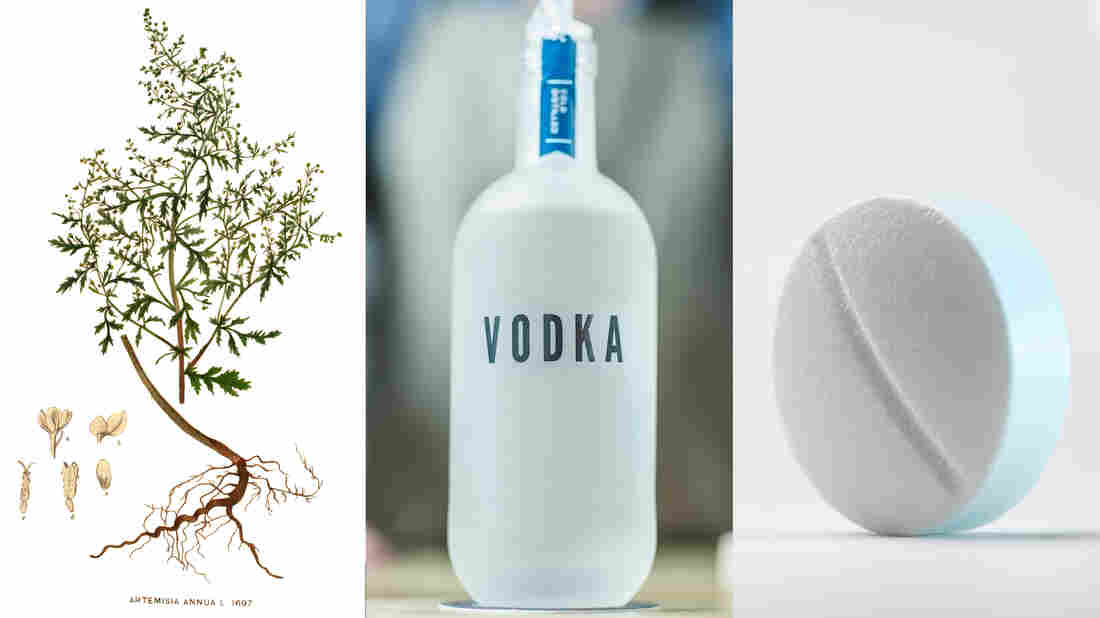 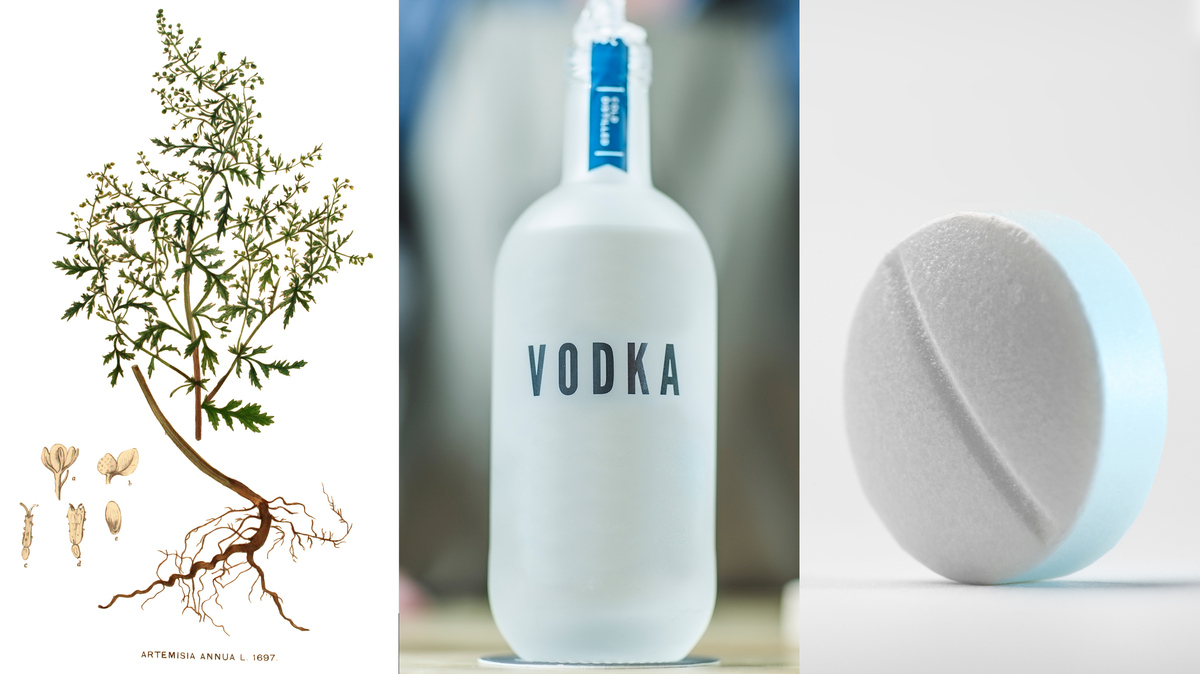 Three things that are being touted (with limited or no evidence) as coronavirus treatments: the bitter root artemesia, vodka and the anti-malarial and arthritis drug hydroxychloroquine.

President Trump may be the most high-profile head of state promoting untested approaches to the coronavirus, but he is not alone on the world stage. Early in March, China's National Health Commission included some traditional Chinese medicine cures on a list of potential treatments for COVID-19. One of those traditional products is tan ri qing, an injectable medicine containing bear bile. Also in March, a top health minister from Prime Minister Narendra Modi's Hindu nationalist party told reporters that "spending 10 to 15 minutes in the sun can provide vitamin D, boost immunity and kills any kind of virus."

Madagascar's President Andry Rajoelina, according to multiple news reports, has promoted an herbal drink called Covid-Organics, which contains artemesia, a bitter root sometimes used to treat malaria. "Tests have been carried out — two people have now been cured by this treatment," Rajoelina said at the launch of Covid-Organics at the Malagasy Institute of Applied Research, which developed the tonic, according to the BBC.

Other world leaders, including Serbia's President Aleksandar Vucic and Belarus's Alyaksandr Lukashenka, have made off-the-cuff comments pondering whether drinking vodka and other alcoholic beverages might help. And Mike Sanko, the governor of Nairobi, Kenya, has gone even further in his speculation about alcohol by including bottles of the cognac Hennessy in coronavirus relief packages, saying on Kenya's Citizen TV, "I think from the research it is believed that alcohol plays a very major role in killing the coronavirus."

Unleashing such unproven ideas amid today's globe-halting pandemic is causing concern among public health experts, who stress that so far, there is no vaccine to protect against the novel coronavirus that causes COVID-19, nor is there a cure.

It's not just government officials speculating about treatments. Televangelist Jim Bakker has been sued by the state of Missouri for promoting a natural remedy, Silver Solution, as a potential cure for COVID-19. And a federal court has ordered a Florida self-described church, Genesis II Church of Health and Healing, to stop promoting its unproven product, Master Mineral Solution, or MMS, as a cure for COVID-19.

MMS contains chlorine dioxide that when taken as directed with an included activator is the same as "drinking bleach," according to the Food and Drug Administration, and can make people sick.

As for Trump, on April 23, he said, "And then I see the disinfectant, where it knocks it out in one minute. And is there a way we can do something like that, by injection inside or almost a cleaning, because you see it gets in the lungs and it does a tremendous number on the lungs, so it'd be interesting to check that, so that you're going to have to use medical doctors with, but it sounds interesting to me." That comment garnered immediate and urgent responses. Health officials from all over the U.S. felt it necessary to remind people that it's dangerous to drink bleach or other disinfectants. The makers of Clorox and Lysol immediately put out reminders that their products should never be used internally.

Earlier, Trump, relying, he said, on his own good feeling, touted the unproven use of hydroxychloroquine, an anti-malaria drug, for use against COVID-19. Scientists immediately urged caution, noting clinical trials were needed before the drug could be recommended. Still, the prescription drug flew off pharmacy shelves. One man died after he ingested chloroquine phosphate, a version of chloroquine used in home aquariums. His wife, who also ingested the substance and survived, said they swallowed the product believing it would prevent COVID-19, according to the Centers for Disease Control and Prevention. Trump has since disavowed his statements about disinfectants as sarcasm, but the question remains. How long might false health claims persist?

History has shown that wrong information can wreak havoc for years. South Africa's President Thabo Mbeki obstructed the introduction of lifesaving AIDS treatment in his country because he refused to believe the scientific consensus that HIV caused AIDS. In 2000 at the International AIDS conference, he publicly rejected the accepted scientific wisdom on the cause of AIDS, instead insisting it was caused by the consequences of poverty, including poor nourishment. As he insisted that alleviation of poverty was the cure, he rejected offers of free drugs to treat South Africans. A 2009 paper in the Journal of Acquired Immune Deficiency Syndrome found that the country's failure to provide proven medical treatment cost 330,000 lives in South Africa, and 35,000 babies were needlessly born infected with HIV between 2000 and 2005. Political leaders have touted other myths around AIDS. South Africa's Jacob Zuma said in 2006 that he showered after sex with an HIV-positive woman, believing that would reduce his chances of infection, according to a BBC report.

The public might ignore scientific evidence when a celebrity has a health story to tell. In Canada, a January 2016 study looked at social media reaction to health misinformation about stroke. Gordie Howe's Miraculous Treatment: Case Study of Twitter User's Reactions to a Sports Celebrity's Stem Cell Treatment was published by Tim Caulfield, in JMIR Public Health and Surveillance in January 2016.

"Gordie Howe was an icon," Caulfield says. He played hockey for the Detroit Red Wings. Following a stroke, he went to Mexico in 2014 to receive unproven stem cell treatment. Afterwards, his family reported general improvements in Howe's condition but provided few details. Caulfield's study examined 2,783 tweets about Howe's stem cell treatment. They found that 79% of them mentioned health improvements. Only three tweets warned that the treatment Howe had lacked scientific evidence supporting it, and overall only 10% mentioned that scientists and researchers have raised questions about the treatment. Only 10% mentioned scientific concerns with the treatment. "This illustrates how the power of a celebrity providing a personal anecdote can overwhelm what the science says," Caulfield says.

There is wide variation in whether a false health claim takes root, says Caulfield. The anti-vaccination movement was ignited by a faulty 1998 study by Dr. Andrew Wakefield. Twelve years later, the journal Lancet retracted the study. But the incorrect belief that childhood vaccinations are linked to autism continues, and some parents continue to refuse to vaccinate their children.

But other health myths eventually die away. "False ideas last as long as they're marketable," says Dr. Stephen Barrett, retired psychiatrist and founder of the website Quackwatch.com. "One factor that makes them go away is that you get a solution that's so widespread you don't need the fake cure anymore." Smallpox, which has been eliminated from the planet, would be the perfect example of a disease no longer in need of snake oil cures.

Might Trump's statements on disinfectants or hydroxychloroquine endure? Initially, there was a flurry of phone calls to poison control centers across the country related to disinfectants. "When misinformation comes out, or you just say something that pops in your head, it does send a wrong message," said Maryland's Gov. Larry Hogan (R) on ABC's This Week. "We had hundreds of calls come into our emergency hotline at our health department asking if it was right to ingest Clorox or alcohol cleaning products — whether that was going to help them fight the virus."

Still, Barrett believes that the disinfectant idea will probably die out quickly. "The idea about ingesting bleach is so far beyond stupid that I don't think it's going to last. The things that are the most dangerous tend not to last very long," Barrett says.

On the other hand, the FDA is still reporting shortages of hydroxychloroquine, even after a study of 368 COVID-19 patients in U.S. Veterans Hospitals found no benefit from the drug and an increased risk of death. An April 10 article in JAMA Health Forum says demand for the drug has exploded, resulting in shortages for patients needing it for proven benefits to treat lupus and rheumatoid arthritis.

Trump has a couple of things going for him when it comes to lengthening the life of at least some erroneous information he espouses, Viswanath says. "For a myth to endure, it requires two types of people: a large group of people who are a ready-made, enthusiastic audience; and enablers — another group of people who are unwilling to challenge false ideas. I'm concerned the misinformation and disinformation will spread because we're not going to change Trump's behavior."

It's too early to know if people will continue to hoard hydroxychloroquine, but Caulfield is launching a study to test how average Twitter users feel about the drug. "We're going to collect a week's worth of tweets that mention hydroxychloroquine," he says. "Our hypothesis is that the misinformation is going to endure." But, as a scientist, he's open to being proved wrong on an issue that is fast moving and one where the public is especially engaged in hearing actual science. After studying health misinformation for decades, he says he's never before seen the public so critical of erroneous advice and so aware of the harm it can do.

That's good news. But quacks and charlatans are resourceful. When the AIDS epidemic hit in the 1980s, says Barrett, a colleague noticed that the people who had been promoting fake cancer cures began to switch their focus. They started promoting fake AIDS cures. "He called it 'Rascal Rollover,' " Barrett says.

Look for Rascal Rollover to happen again, Barrett says. The people once touting immune system boosters, fake cancer cures, phony arthritis treatments and other bogus treatments will likely be the ones promising to prevent and cure COVID-19.

Sushmita Pathak contributed to this story.