Accessibility links
What We Know About Coronavirus Mutations : Goats and Soda There are various studies looking at changes to the virus genome — and the possible impact on how the virus affects humans. Here's what we know (and don't yet know) about mutations.

The Coronavirus Is Mutating. That's Normal. Does That Mean It's More Dangerous?

The Coronavirus Is Mutating. That's Normal. Does That Mean It's More Dangerous? 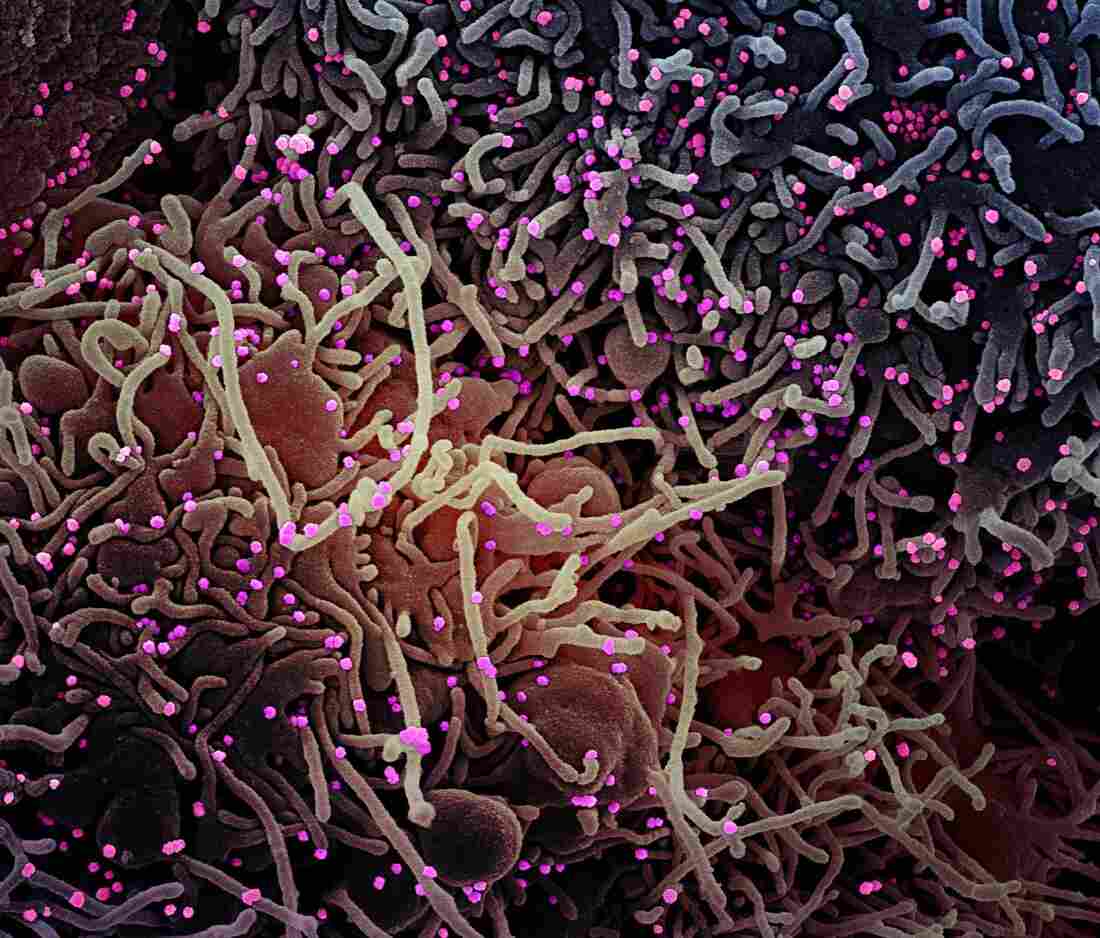 This image made by a scanning electron micrograph shows SARS-COV-2 virus particles (colorized pink) from a patient sample. There are various studies looking at changes to the virus genome — and the possible impact on how the virus affects humans. NIAID/NIH hide caption 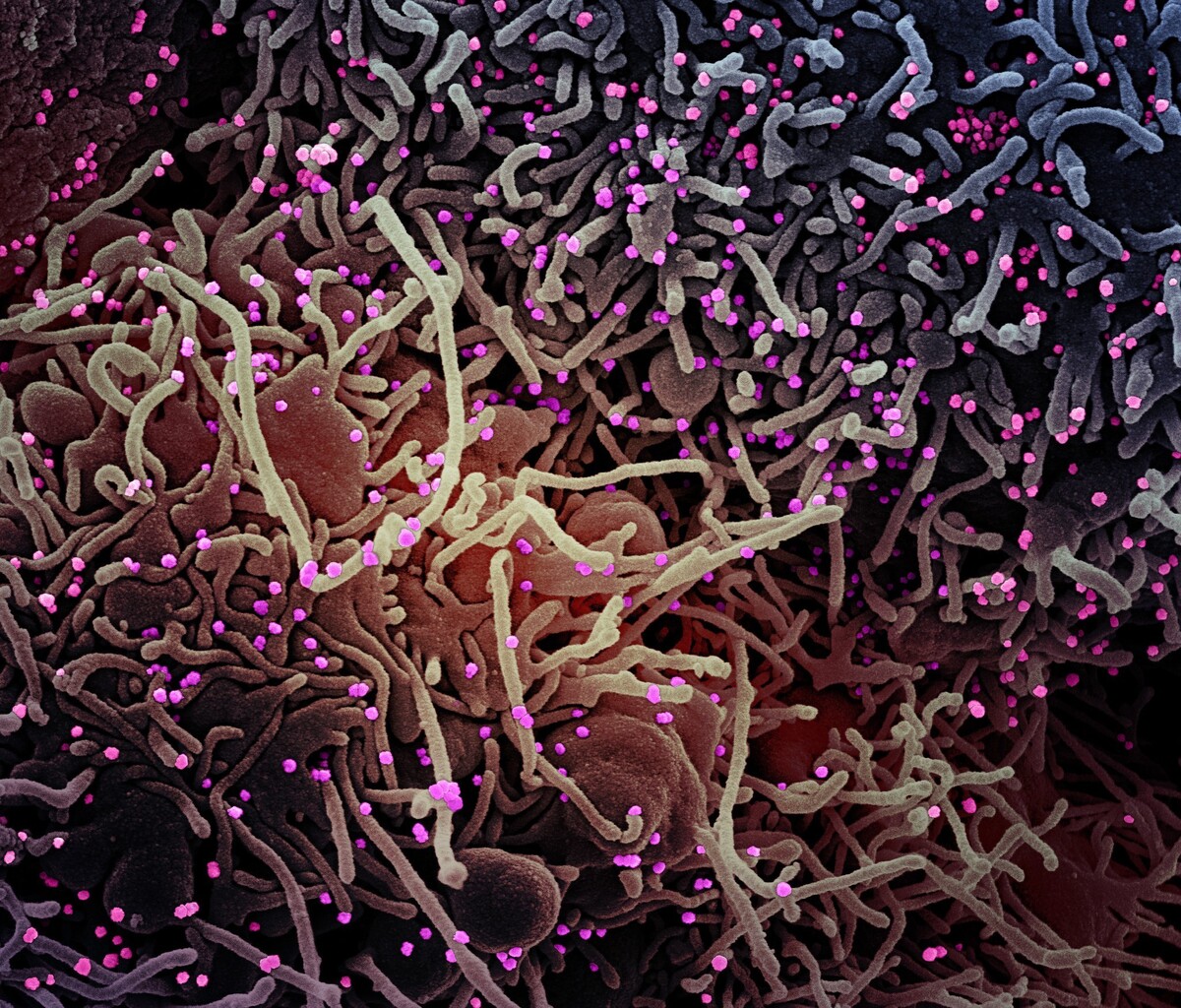 This image made by a scanning electron micrograph shows SARS-COV-2 virus particles (colorized pink) from a patient sample. There are various studies looking at changes to the virus genome — and the possible impact on how the virus affects humans.

This week, the question of mutation has been front and center in coverage of the coronavirus — from controversial claims about changes that make the virus more contagious to reassurances that any mutations are not yet consequential.

Here are some of the questions being raised — and what the specialists can (and can't yet) say to answer them.

Is the coronavirus mutating?

Researchers say the coronavirus is making small changes to itself as they would expect it to — at a relatively predictable and steady rate of around one to two changes per month.

"Viruses mutate naturally as part of their life cycle," says Ewan Harrison, scientific project manager for the COVID-19 Genomics UK Consortium. The coronavirus is no different.

When a virus infects a person, it enters their cells and makes copies of itself, which then circulate through the body or are transmitted — respiratory droplets is one method — to other humans.

Inevitably, viruses "make mistakes in their genomes" as they copy themselves, Harrison says. Those changes can accumulate and carry over to future copies of the virus. Mutations are akin to typos in text — most typos are nonevents, but some can change the meaning of a word or sentence. Likewise, many mutations will be dead ends with no effect on people who are infected. But some of these mutations in a virus may change how quickly it infects people and replicates, or what kind of damage it does to cells.

These small, cumulative changes are useful to researchers, because they act as identification cards that help trace the pathway of the virus through groups of people over time. For instance, in a surveillance study on the Arizona State University campus, researchers found that the people who were showing up sick in mid-March with the coronavirus had different versions of the virus from each other. Comparing the virus genomes helped them figure out that the spike in mid-March cases probably didn't signify an outbreak on campus; the cases had had likely caught this version of the virus elsewhere, perhaps when they traveled for spring break, and brought it back. So tracking virus genomes is valuable in tracing how and where the virus is spreading.

Is the coronavirus becoming more transmissible?

Twitter lit up this week when a draft research paper posted to the preprint server bioRxiv got picked up by the media. The paper suggests in the title that their analysis of coronavirus mutations "reveals the emergence of a more transmissible form of SARS-CoV-2."

The study was conducted by researchers at Los Alamos National Laboratory, The University of Sheffield and Duke. They analyzed publicly available genome sequences from around the world posted on GISAID, a global research platform that has amassed over 16,000 coronavirus sequences to date.

The researchers found that a version of the virus, which was first detected in Europe in early February, appears to have become the most common strain in the U.S., Australia, parts of Africa — basically, anywhere it spread. The study authors hypothesize that a mutation in this virus strain, which changes one amino acid in the part of the coronavirus that finds and binds to cells, could cause the virus to spread more easily.

"I think that it is an important observation," says Angela Rasmussen, a virologist at Columbia Mailman School of Public Health, "We have seen in other virus epidemics, such as the Ebola epidemic, that there are these mutations that seem to persist and become the dominant form of the virus."

However, Rasmussen says, there's no clear evidence that the mutation referenced in the paper does anything to change how the virus spreads.

Other factors could also account for why the virus from Europe is dominant, says Justin Bahl, a computational biologist at University of Georgia. It could possibly be explained by the so-called "founder effect," where the European version spread rapidly across international borders and established itself as the dominant strain because countries were slow to lock down.

To prove whether the mutation identified in the paper causes the virus to spread more easily, researchers want to see experimental evidence: for instance, a study where both strains are tested in live cells, to see if the mutated virus replicates faster. If those results show such signs, they'll want to see if one virus spreads more readily in lab animals.

Is the coronavirus mutating to become less harmful?

Another study, published in Journal of Virology, identified one patient in Arizona who was carrying a version of the virus with a chunk of it missing. The deletion was sizable — 81 nucleotides long, out of the 30,000 or so that make up the coronavirus' genome sequence (in case you're wondering, a nucleotide is a molecule that forms the building block of a DNA or RNA strand and is too tiny to be seen under most microscopes). It was also found in a location on the genome which, on the classic SARS virus, helped the virus fight the immune system, according to study co-author Efrem Lim, a virologist at Arizona State University.

The researchers hypothesize that the deletion "may potentially reduce virus fitness" — a claim Lim says they're now testing in labs.

The paper is based on just one virus genome, out of the 16,000 that have been sequenced and shared, which makes it difficult to generalize to the larger group of circulating versions of the novel coronavirus. "We actually have no idea whether [a virus with this deletion] is transmissible or not," Bahl says. "We don't know whether it was just a one-off event or whether these variants are transmitting and becoming more frequent in the population [of people getting coronavirus]."

More evidence is needed to see if Lim's hypothesis holds — and it will emerge as research continues.

Do the mutations we're seeing affect the development of treatments and vaccines?

Not yet. "We're getting the mutations that we're kind of expecting here," says Vineet Menachery, a virologist at the University of Texas Medical Branch, so the research process already accounts for these changes.

Menachery says the European mutation tracked in the Los Alamos paper is adjacent to, but not directly on, the receptor binding domain, which is a specific part area on the virus' protein shell that initiates first contact in attaching to human cells. "If these mutations were there, there'd be a little bit more worry about antibody-based approaches and vaccine approaches," he says, because the shifts might make it harder for antibodies to recognize the virus. But the mutations are not directly on the receptor binding domain, so researchers aren't too worried about those specific changes.

Vaccines are also developed to target multiple sites on a virus, so it's unlikely that a few random mutations to the virus can knock out their power completely, Rasmussen says.

Versions of the virus that are drug- or vaccine-resistant may crop up once therapies are in use, says Lim. If a particular strain is obliterated by drugs or vaccines, then any viruses that survive will be the ones not affected by those treatments and could go on to infect others. But for now, there's no pressure on the virus to change in a way that would help it evade measures that haven't been introduced.

Why are scientists sharing unproven theories?

The main scientific purpose of sharing these papers early and often is to alert other researchers to interesting theories and call attention to potentially meaningful mutations, Lim says.

"It helps us prioritize what mutations should be studied in the lab, because there are so many mutations out there," Lim says. By sharing leads and data-backed theories, scientists are highlighting specific mutations that may be affecting the behavior of the virus, in a sea of all the small changes the virus makes.

So it helps researchers to know that scientists at Los Alamos Lab think that a particular change in the genome is worth additional study, or that a deletion in the virus has been found once and could be found again. The answers may not be definitive, but it feeds the global brain trust of researchers who are all working to understand the coronavirus better and help defeat it.