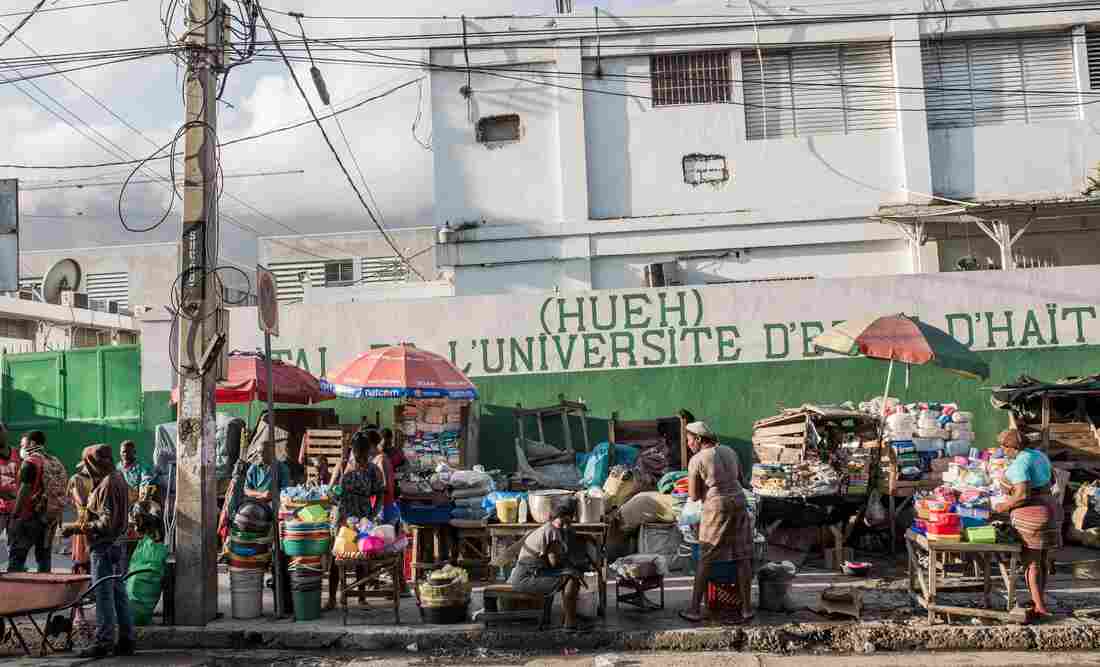 A busy market near the state hospital in downtown Port-au-Prince. Despite a halt to air travel and other lockdown measures, Port-au-Prince looks as busy as ever, observers say. Pierre Michel Jean /AFP via Getty Images hide caption 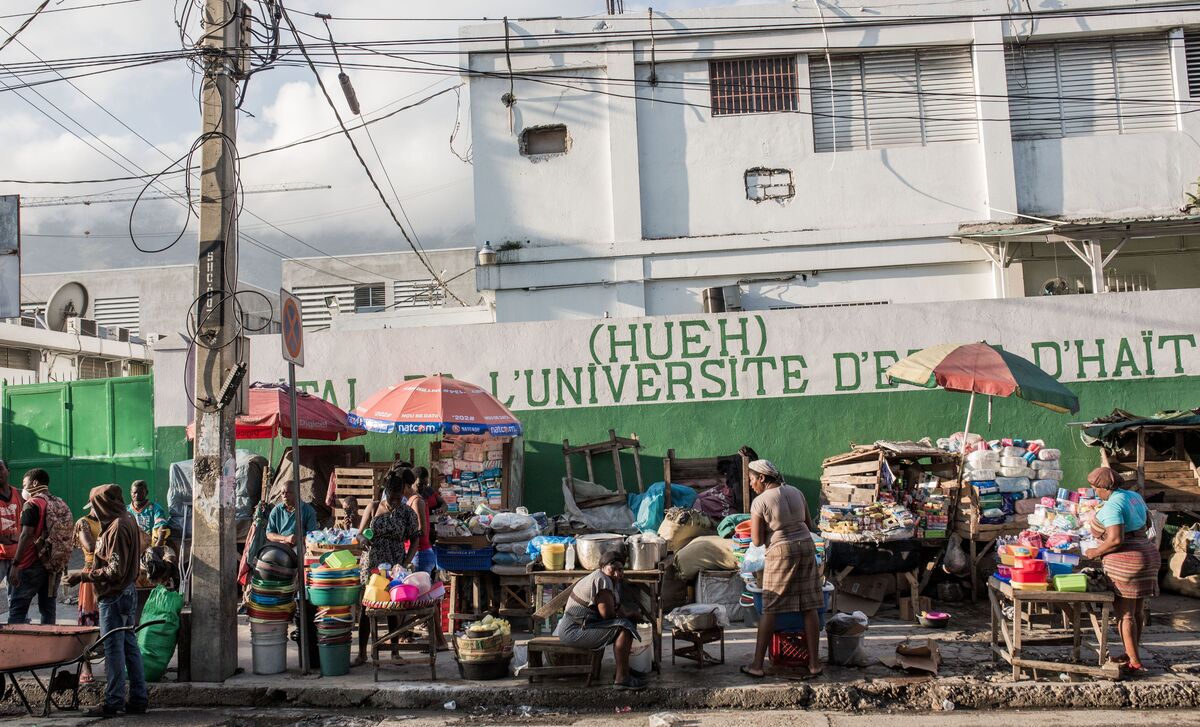 A busy market near the state hospital in downtown Port-au-Prince. Despite a halt to air travel and other lockdown measures, Port-au-Prince looks as busy as ever, observers say.

The number of confirmed coronavirus cases in Haiti has doubled over the past week, according to the Haitian Ministry of Health.

As of May 13, there were 219 cases, up from 108 a week earlier. Cases are now being reported from all 10 departments, the local version of states, although the bulk of confirmed infections are in and around the capital Port-au-Prince.

That bump in cases comes in the wake of a Pan American Health Organization warning of an impending humanitarian crisis in Haiti because of the pandemic. Haiti shares the island of Hispaniola with the Dominican Republic, which is experiencing one of the worst outbreaks in the hemisphere. With the Dominican Republic under lockdown, thousands of laid off migrant workers have headed home to Haiti, and presumably some of them are carrying the virus with them.

"There is real danger of a large-scale outbreak followed by a humanitarian crisis in Haiti," said Carissa Etienne, the head of PAHO, in a briefing with reporters. She said Haiti's health care system is ill-equipped to deal with an outbreak of a highly infectious, potentially fatal respiratory disease. And the measures used elsewhere to stem the spread of COVID-19 are impractical or impossible in Haiti.

"It is extremely difficult to institute proper social distancing in Haiti," she said — especially in the densely packed neighborhoods of Port-au-Prince.

"Most Haitians do not have access to potable water and sanitation, and many live in crowded households where quarantine and isolation are challenging," she noted. "In addition, there is the real risk that growing food insecurity will result in famine. Civil unrest, a difficult political situation and precarious security may further complicate the situation."

Elections scheduled for last year fell apart because of political gridlock, the terms of most of the legislators expired and President Jovenel Moise has been ruling the country by decree ever since.

"I'm extremely worried for a number of reasons," Dr. Jean "Bill" Pape says about the coronavirus situation in Haiti. Pape did pioneering work on HIV and AIDS in Haiti in the 1980s. He's now co-chair of a national commission trying to address COVID-19. And his list of worries is long.

"First, we have a divided country, politically. We need to fight this virus. We need to be united, and with a divided country, that division is a big issue," he says. "Secondly, there is the security issue. As you know, a lot of poor people live in the slums. Slums are controlled by gangs. And how can we reach the poor people there if access is not readily available?"

Pape also worries about the economic impacts of the coronavirus crisis. Haitians rely heavily on money sent home from relatives working abroad. As the global economy has stalled, remittances to the island have dropped sharply.

As of Friday, Haiti had only reported 129 coronavirus cases, but Pape says the actual number is likely far higher — even with very limited access to testing, and the pace of newly diagnosed infections is increasing.

Elsewhere, most people with COVID-19 have mild symptoms, which Pape thinks could make tracking it in Haiti even more difficult. "We are only screening people who are symptomatic for the virus," he says. "Haitians are very tough. They will not go to a health center if they have mild symptoms."

After the first official coronavirus case was detected on March 19, the government closed schools and banned church services. Tap-taps, the ubiquitous vans that serve as public transportation, were supposed to reduce the number of passengers they carry. But Sandra Lamarque, the head of mission for Doctors Without Borders in Haiti, says she sees many that still appear packed. And most other commercial activities in the country are continuing.

"It is very, very busy as usual. Markets are crowded," she says. "Really it looks like business as usual."

Doctors Without Borders is setting up isolation wards for COVID-19 patients and helping to run information campaigns on the disease. Still, Lamarque says confronting this virus in Haiti is going to be difficult.

"Just getting enough personal protection equipment for health staff in Haiti and getting oxygen for every single severe patient of COVID- 19 in the country will be challenging," she says.

Only two laboratories in the country are able to test for the virus. One of them is at Dr. Pape's organization GHESKIO. The other is at the Ministry of Health.

Pape says there are other clinics nationwide that have machines capable of testing for the virus, but Haiti can't get the specific cartridge necessary to adapt these GeneXpert diagnostic machines to screen for SARS-CoV-2.

"We don't have access to those tests," he says. "They cannot export them. They are only kept in the U.S." Some of the kits have been exported, but other countries including South Africa have complained that the U.S. is hampering the sale of this particular test abroad.

To meet the need for personal protective equipment, Haitian factories have started producing it themselves. And Pape has been trying to fly in other medical supplies from China.

"It's been a nightmare, a total nightmare," he says of trying to import supplies and equipment. Most commercial flights in to Haiti have been canceled. "We cannot have a direct flight from China because we don't have diplomatic relations with China. Secondly, supplies are very, very expensive. And then if you're getting it by plane, the cost of [chartering] a cargo plane is $1.2 [million] to $1.5 million. I could not believe it."

He says he checked into shipping the gear via FedEx, and it was even more expensive.

"Haiti always benefited from the support from its friends," he says, but "the United Nations is no longer united. The nations are fighting one another [for supplies]."