Accessibility links
Pandemic Art From U.N. And Amplifier Callouts Aims To Inspire And Inform : Goats and Soda The United Nations and Amplifier, an arts group, called on artists to create inspiring and informative posters, graphics and animations around the coronavirus. Here's a selection of submissions.

Artists Paint A Portrait Of A Pandemic

Artists Paint A Portrait Of A Pandemic 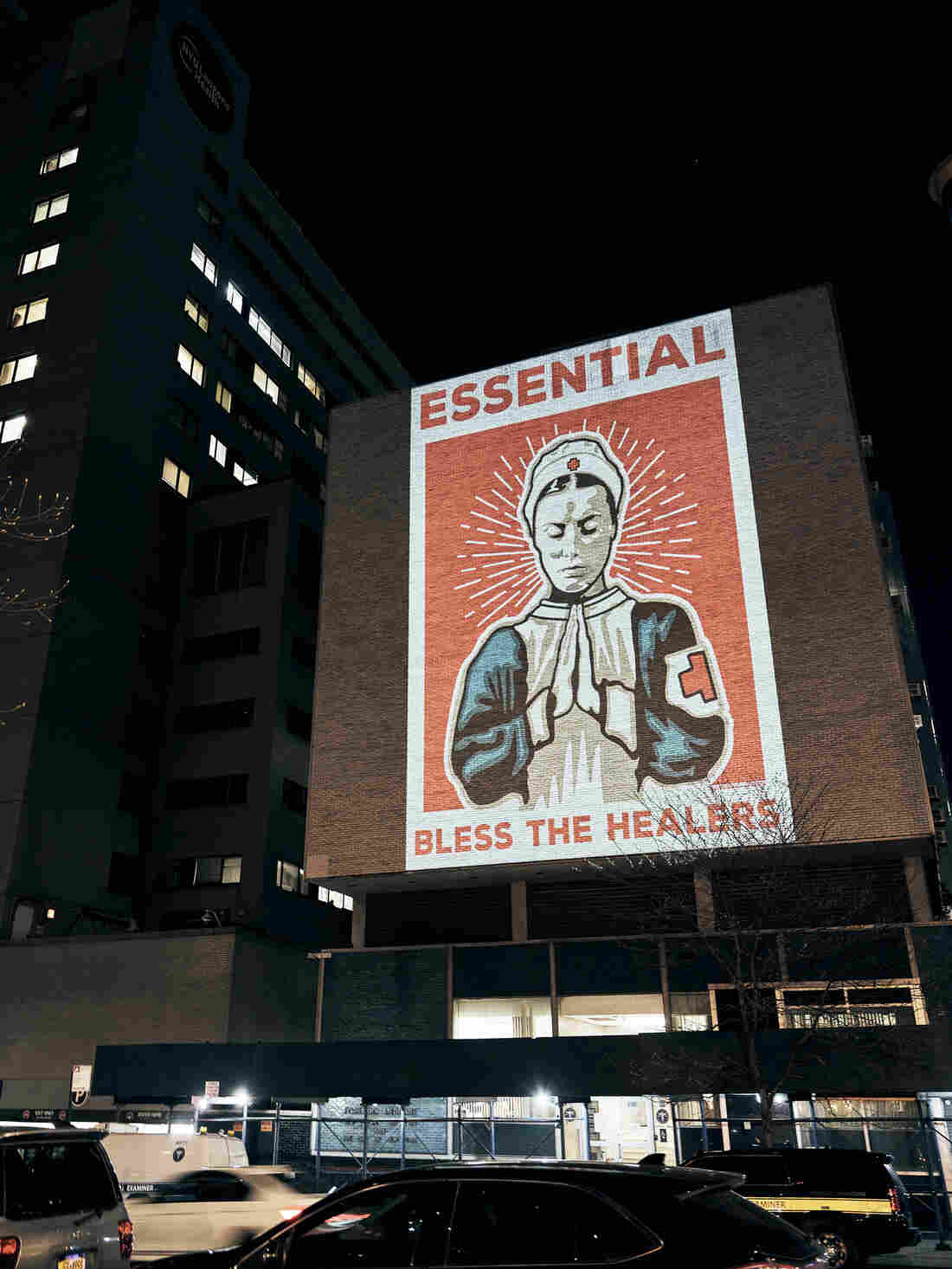 "Essential," a poster design by Marvin Madariaga, is projected onto a hospital building in New York City. It was submitted to the arts group Amplifier's open call for pandemic art. Jean Sonderand/ The Illuminator hide caption

It's an image of a nurse with her hands pressed together in prayer. In bold letters below her hands, it says "bless the healers."

The illustration, designed by the artist Marvin Madariaga, has been shared across social media. Some people have posted it in the window of their home. And it's been projected on the side of a building in the heart of New York City.

In health crises, people have long turned to the arts to inform and inspire. During the 1980s AIDS epidemic, the words "silence = death" were printed on posters, pins and patches. And during the 2014 Ebola crisis, murals with the slogan "Ebola is real" were painted across West Africa.

The coronavirus pandemic is no different. Two organizations, the United Nations and Amplifier, an arts group, launched independent campaigns in March inviting artists to submit artwork around the coronavirus. Tens of thousands of submissions later, the groups are now showcasing a selection of these works to the public.

Madariaga's artwork was submitted to Amplifier, which coordinated some of the iconic poster designs around the Women's March on Washington in 2016.

"In times of uncertainty, art is more than beauty or decoration — it's a tool. Art can heal, art can save lives, art can bring us together — even when we're apart," says Aaron Huey, founder of Amplifier. "It can be a compass to guide us through the storm." 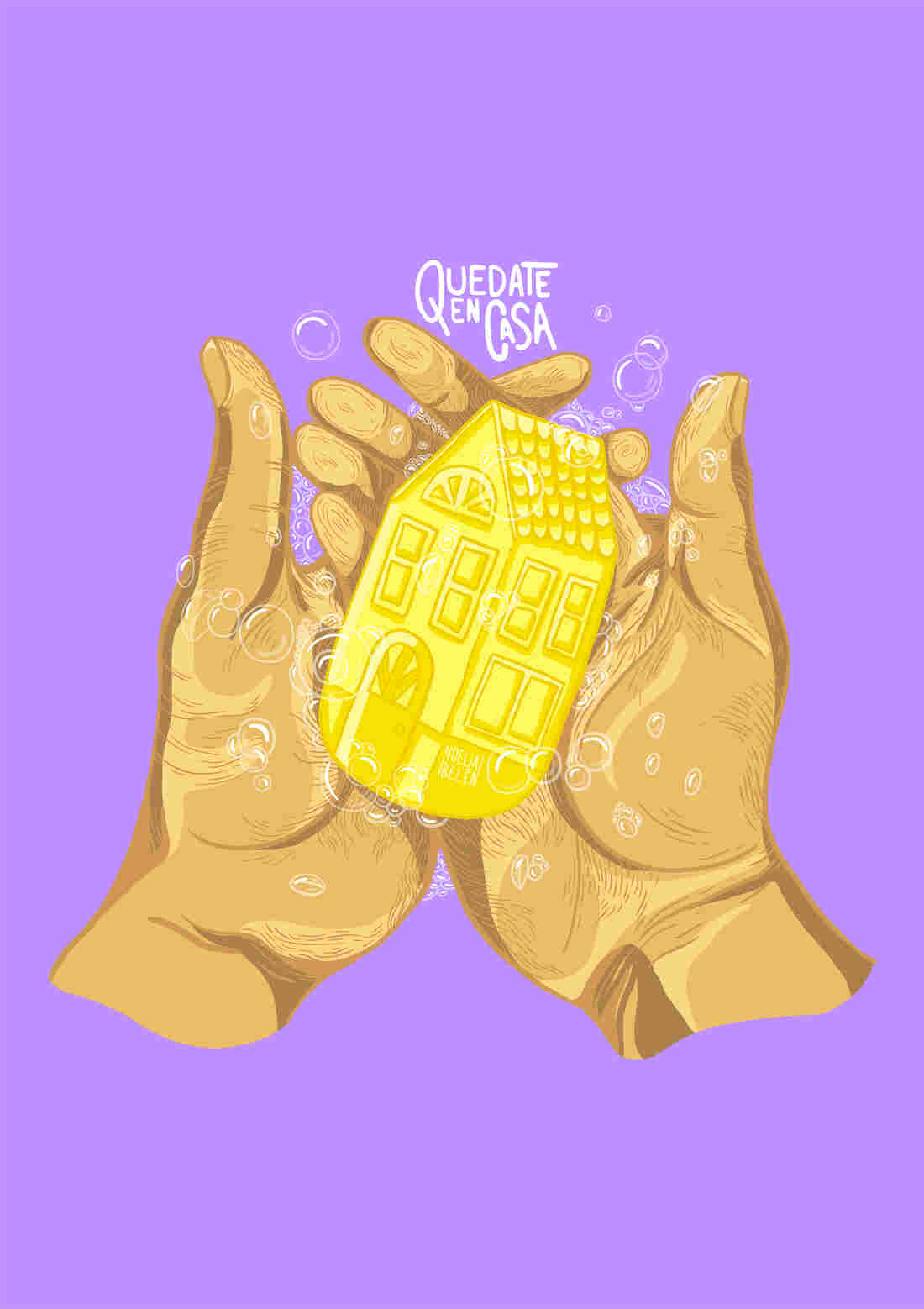 In March, the U.N. put out an open brief, or request, calling on artists to produce "concise and impactful visuals to help share life-saving information on COVID-19."

"The idea was really to try and lean into the creative community, to try and help identify, interpret, and amplify the messages that were keeping people safe," says Dawda Jobarteh of the U.N., who helped organize the campaign.

Since then, it has received nearly 17,000 designs from artists in 143 countries, ranging from photography to animation, graphic design to hand-drawn posters.

Some submissions focus on unity. In one, Mexican artist Lisa Saldivar depicts the facade of an apartment building, as a crowd of people converse. Bubble letters frame the piece: "kindness not cancelled." 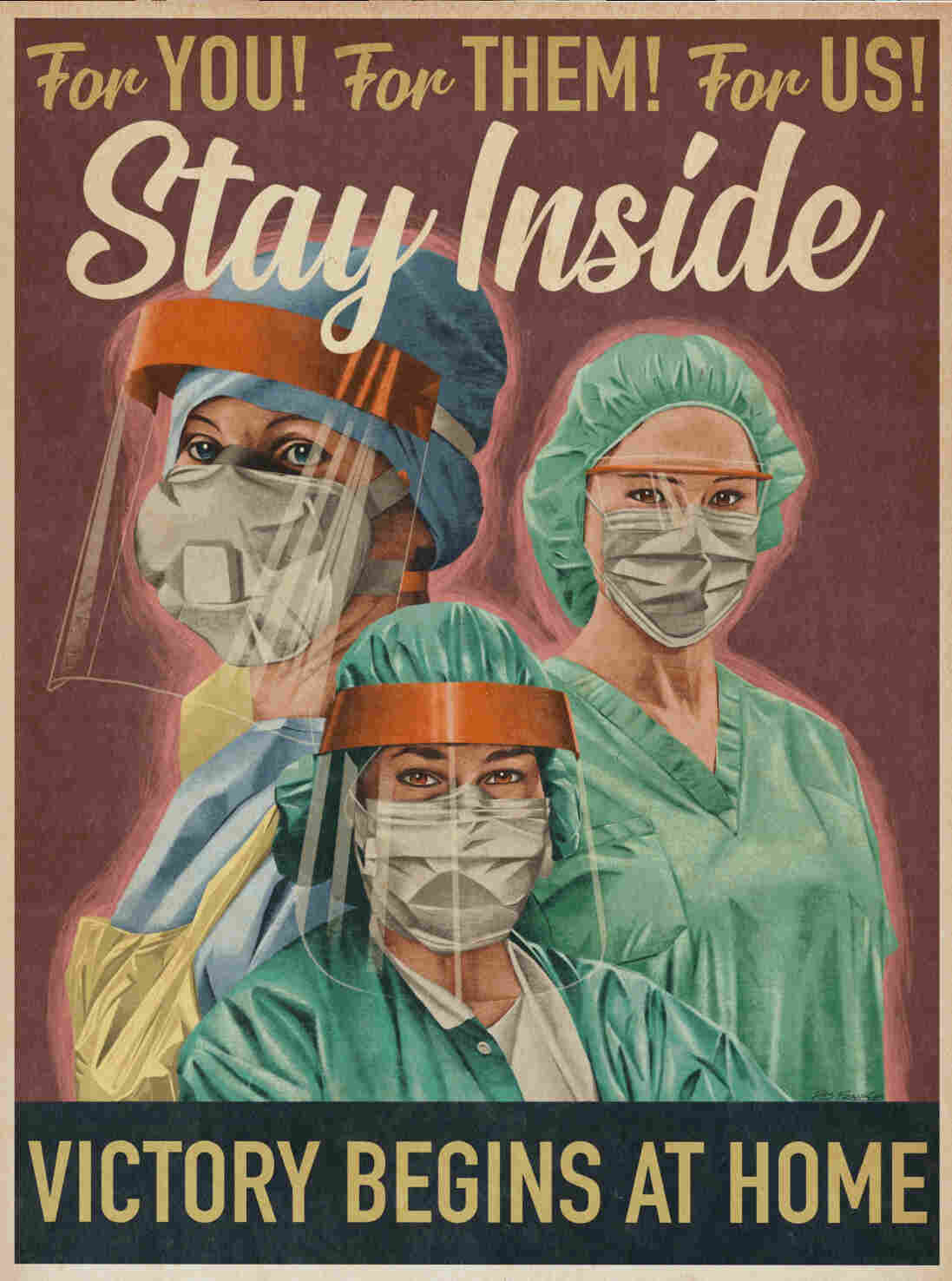 Other submissions, like one from Russian artist Irina Chaitsyna, emphasize important health messages. Her illustration shows people engaged in activities like exercising and painting spelling out the words "stay home" with their bodies.

After the call for submissions ended on April 14, the U.N. evaluated the designs to ensure that they were promoting accurate health messaging according to the World Health Organization's safety guidelines. On April 30, it made the vetted images available in an online portal — and are now encouraging people to view the images, download and share. There is no cash prize, but the U.N. will feature some of the artwork on their social media channels.

Amplifier's campaign had a slightly different brief. On May 8 it ended a campaign calling on artists to create visuals that promote mental health and well-being amid the pandemic. It also called for artwork that envisions life after lockdown. 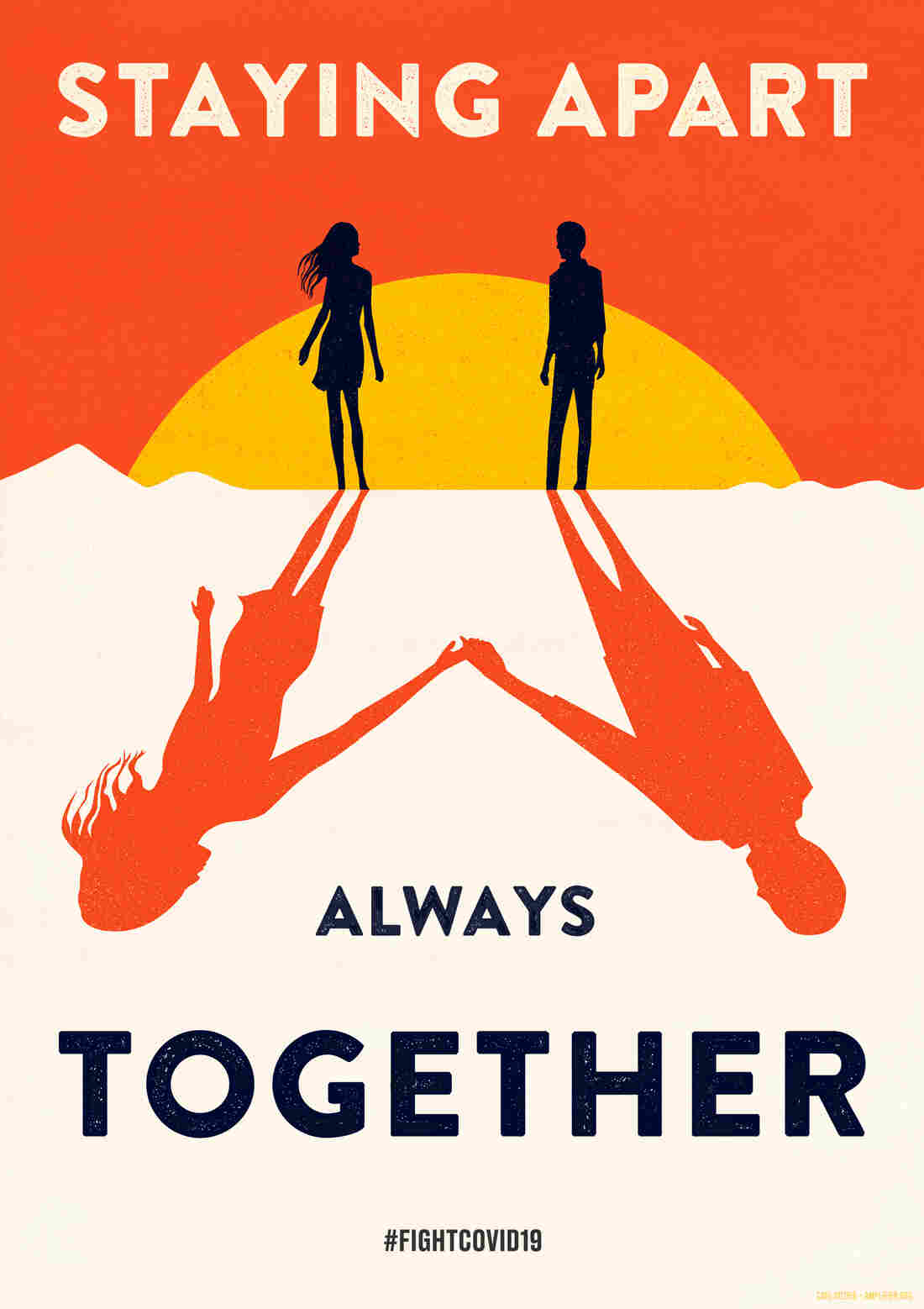 A submission to Amplifier. "This piece shows love, friendship and community overcoming the distance we must place between us in our fight to reduce the spread of COVID-19," writes the Carl Cozier in his artist's note. Holy Moly UK hide caption

Since then, it has received over 10,500 submissions — with 100 entrants selected for a $1,000 individual cash prize. Like the U.N., selected images are also available on Amplifier's website for people to download for free and share.

Amplifier is taking things a step further by turning some of the submissions into a series of public art installations in cities around the world, in partnership with the arts group The Illuminator. In addition to being projected onto a building in New York City, Madariaga's nurse poster also wallpapers a building on Oxford Street in London.

Passersby are snapping photos of the installations and posting it to social media. "This is so dope," writes Instagram user @where_bry_at, of a projection depicting a black female health worker in a mask. "I love the message, the representation and the encouragement."

Praising the efforts, Glen Nowak, director of the Center for Health and Risk Communication and a professor of advertising at the University of Georgia, says public art campaigns like these can help drive home important messages around a health crisis. He cites the AIDS Memorial Quilt as an example. First created in 1987, the quilt is a vast patchwork of more than 50,000 panels commemorating the lives of the epidemic's victims — while helping the public comprehend the reality of the crisis.

Unlike other kinds of messaging, art is colorful, engaging and provocative, says Nowak. And for that reason, it "can grab people's attention" in a special way. 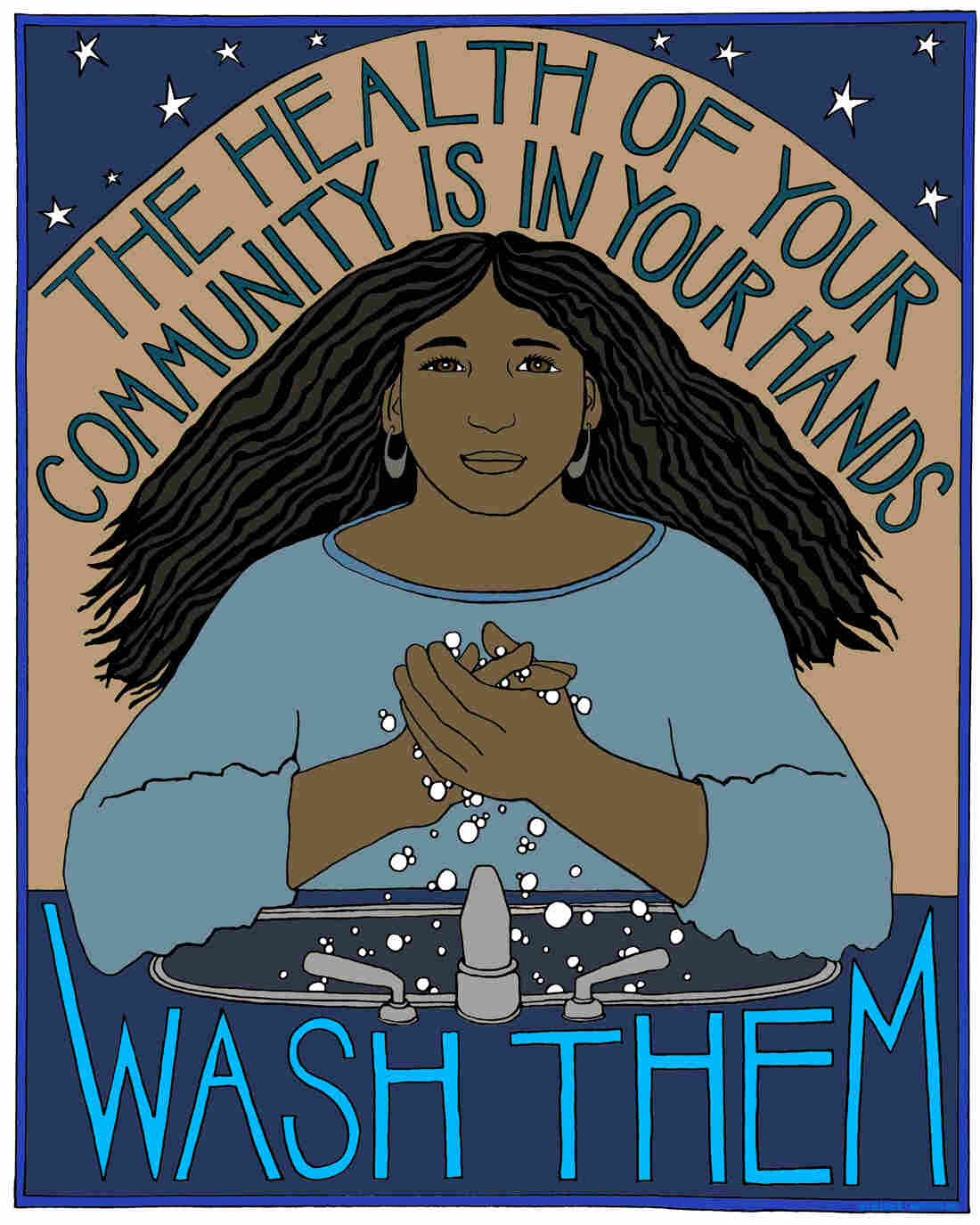 A submission to Amplifier, titled "In Your Hands." Jen Bloomer hide caption 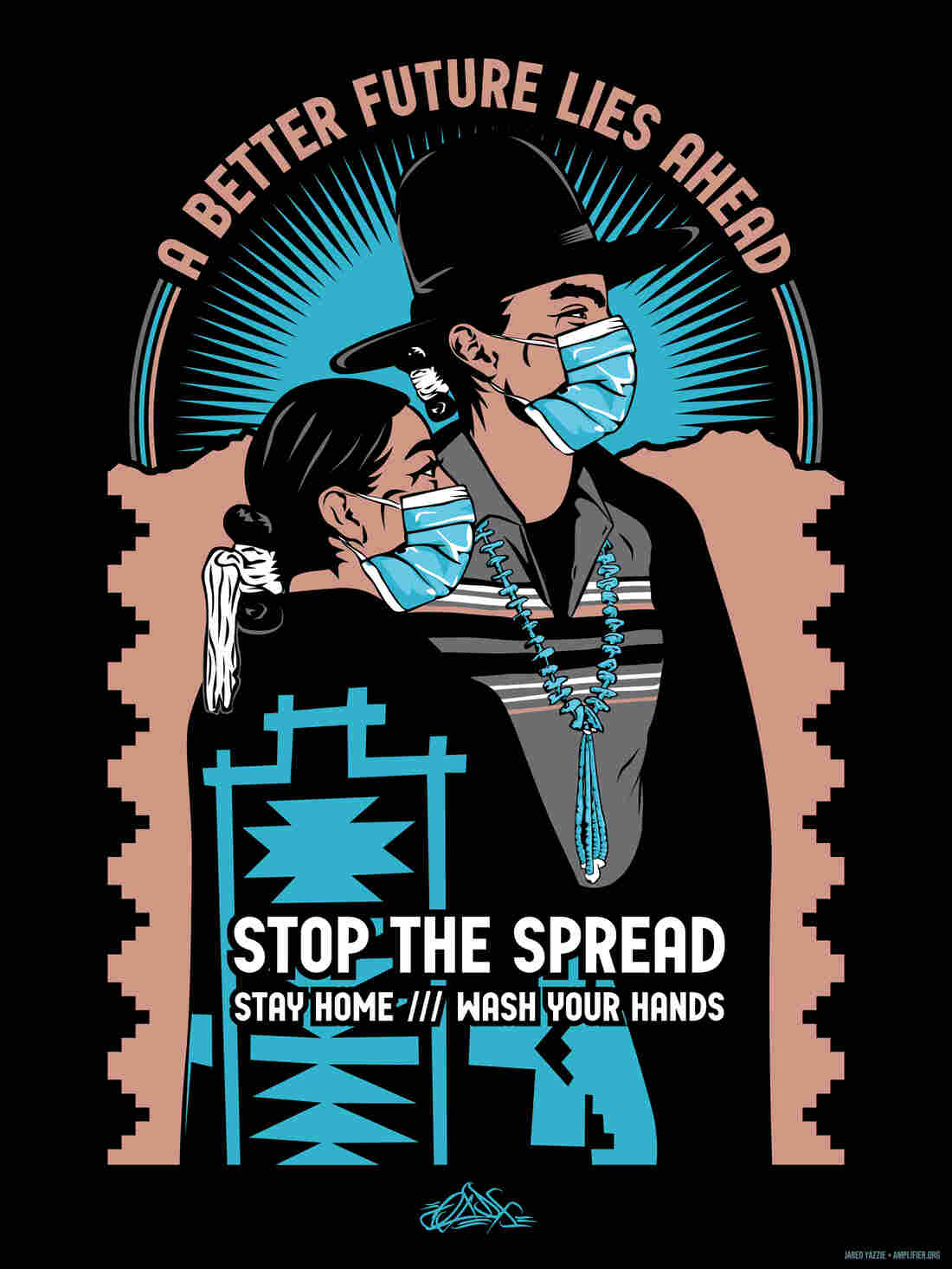 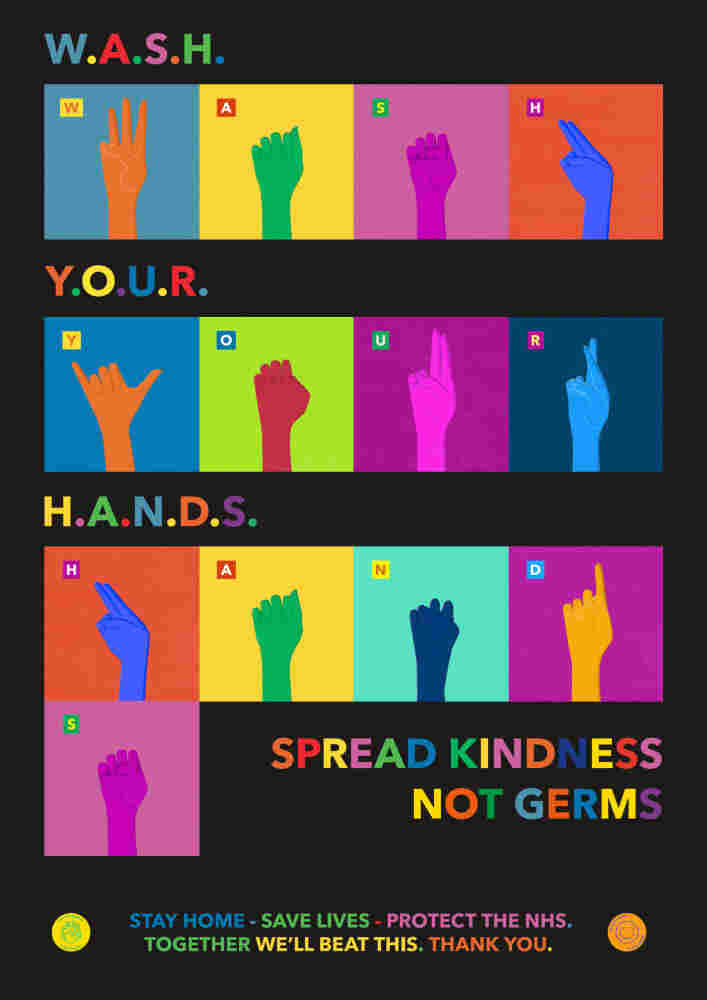 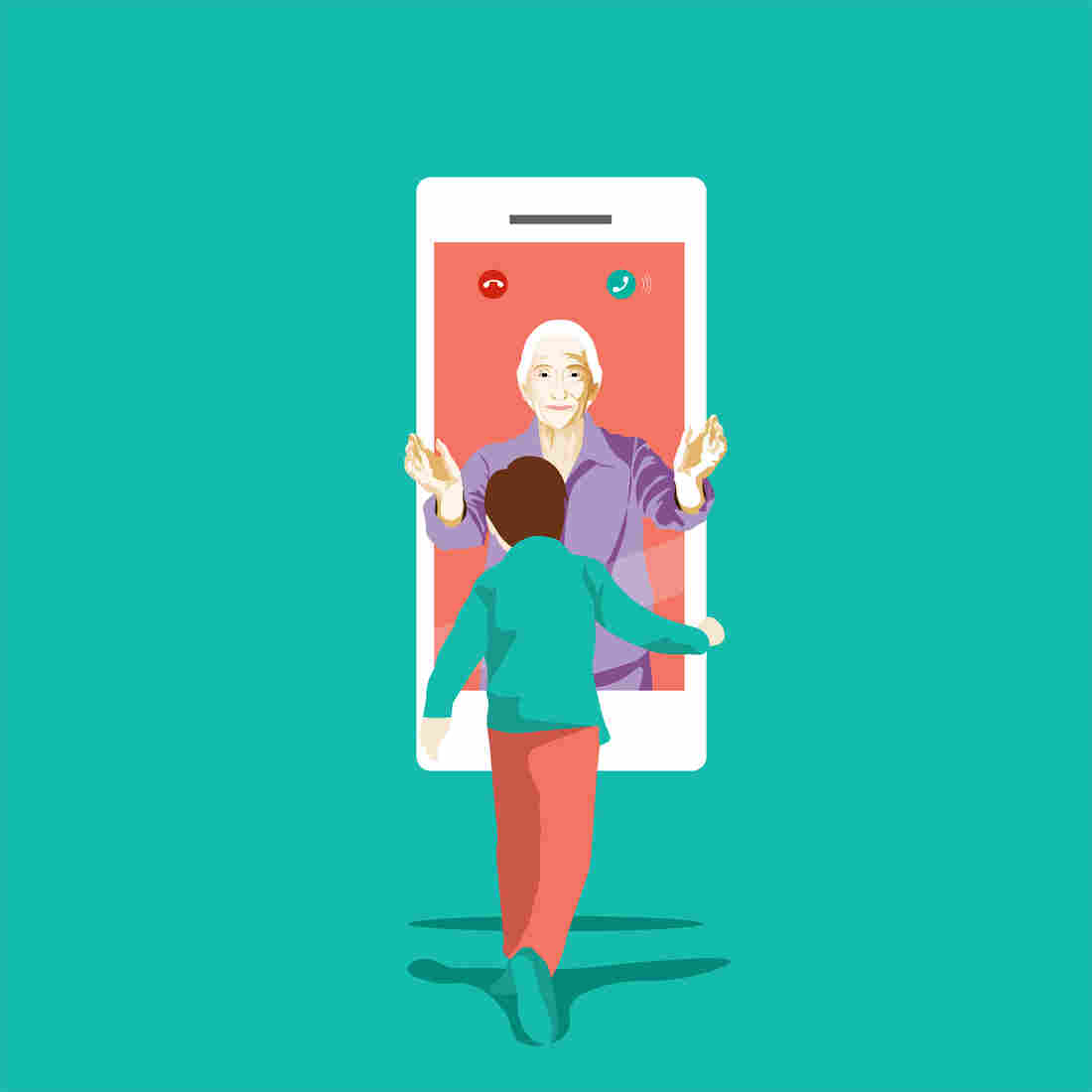 A submission to the U.N. The artist writes that the design draws attention to digital connections "as a positive way of maintaining close and caring bonds with family members." Nubefy Design for All hide caption

toggle caption
Nubefy Design for All 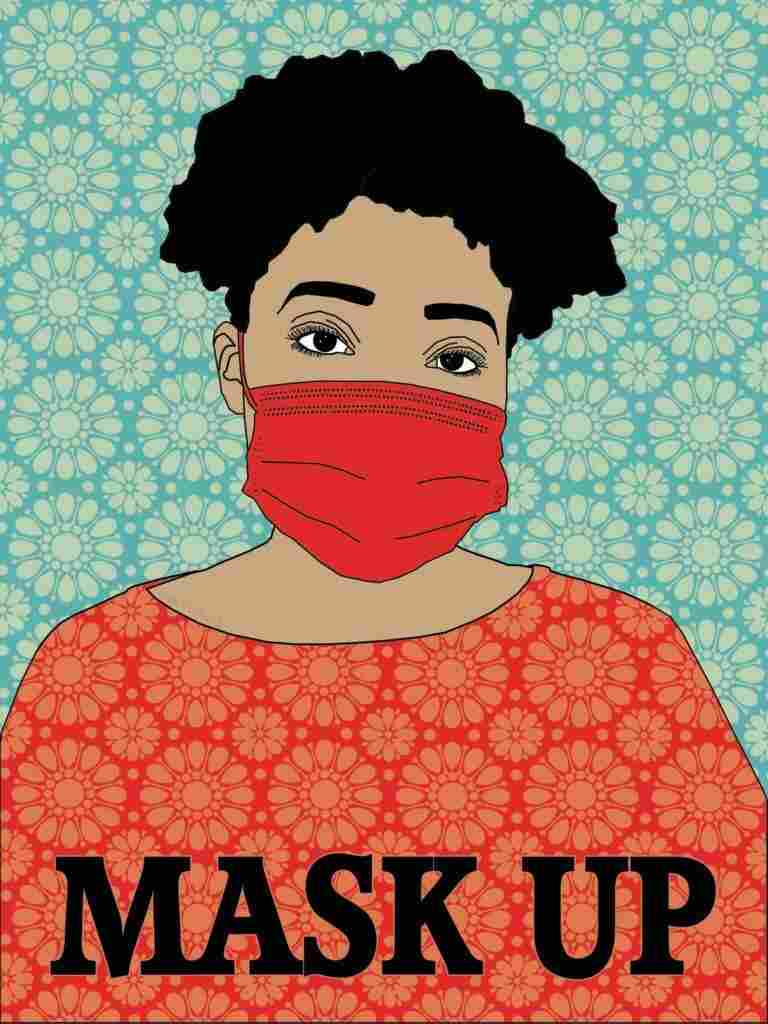 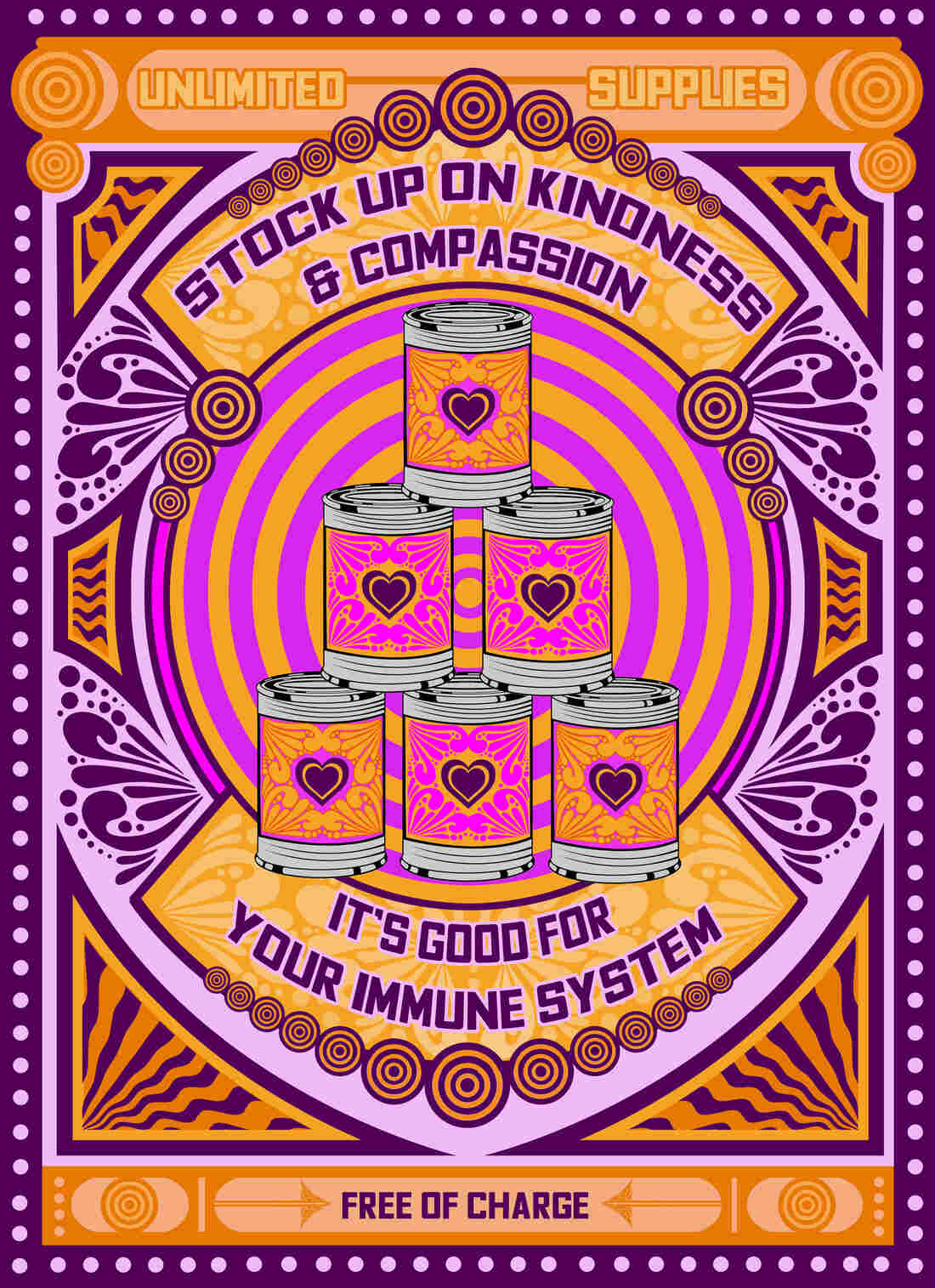 A submission to the U.N. "Witnessing acts of kindness produces oxytocin, occasionally referred to as the 'love hormone' which aids in lowering blood pressure and improving our overall heart health. Oxytocin also increases our self-esteem and optimism," writes Frankie Beckley in their artist's note. Frankie Beckley hide caption