Accessibility links
With Solid Strategies And A Human Touch, Senegal Aims To Fend Off COVID-19 : Goats and Soda Despite a less than robust health system, the African nation has been praised for its efforts to halt the spread of COVID-19.

Senegal Pledges A Bed For Every Coronavirus Patient — And Their Contacts, Too

Senegal Pledges A Bed For Every Coronavirus Patient — And Their Contacts, Too 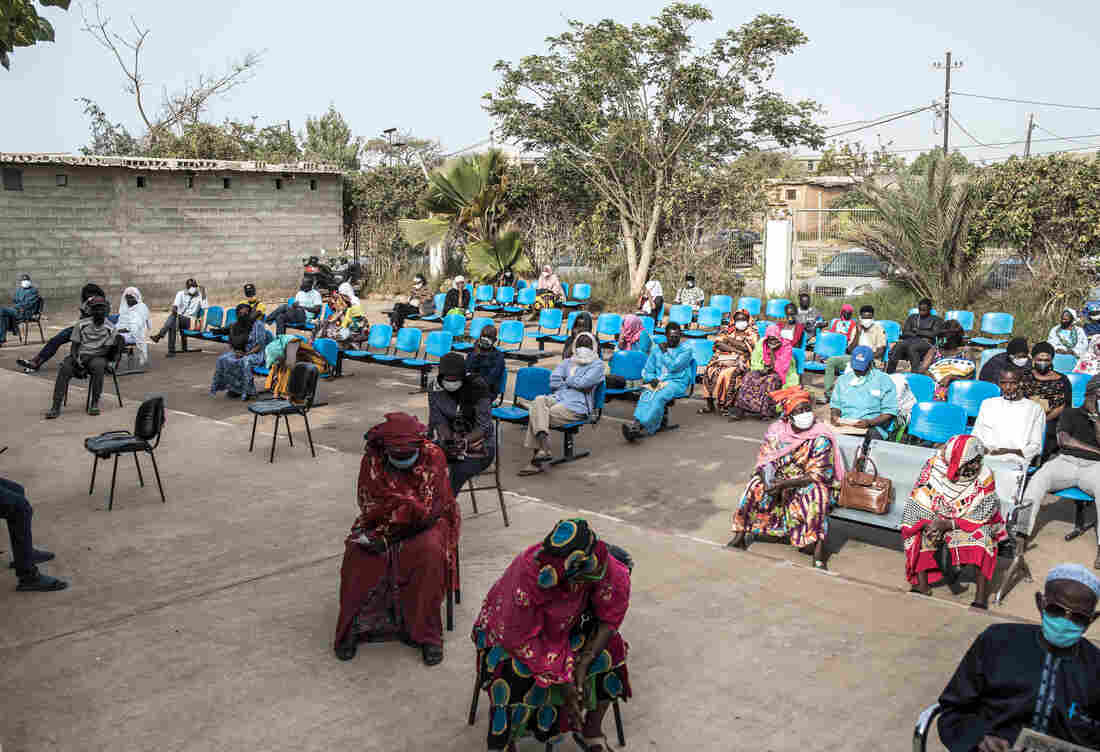 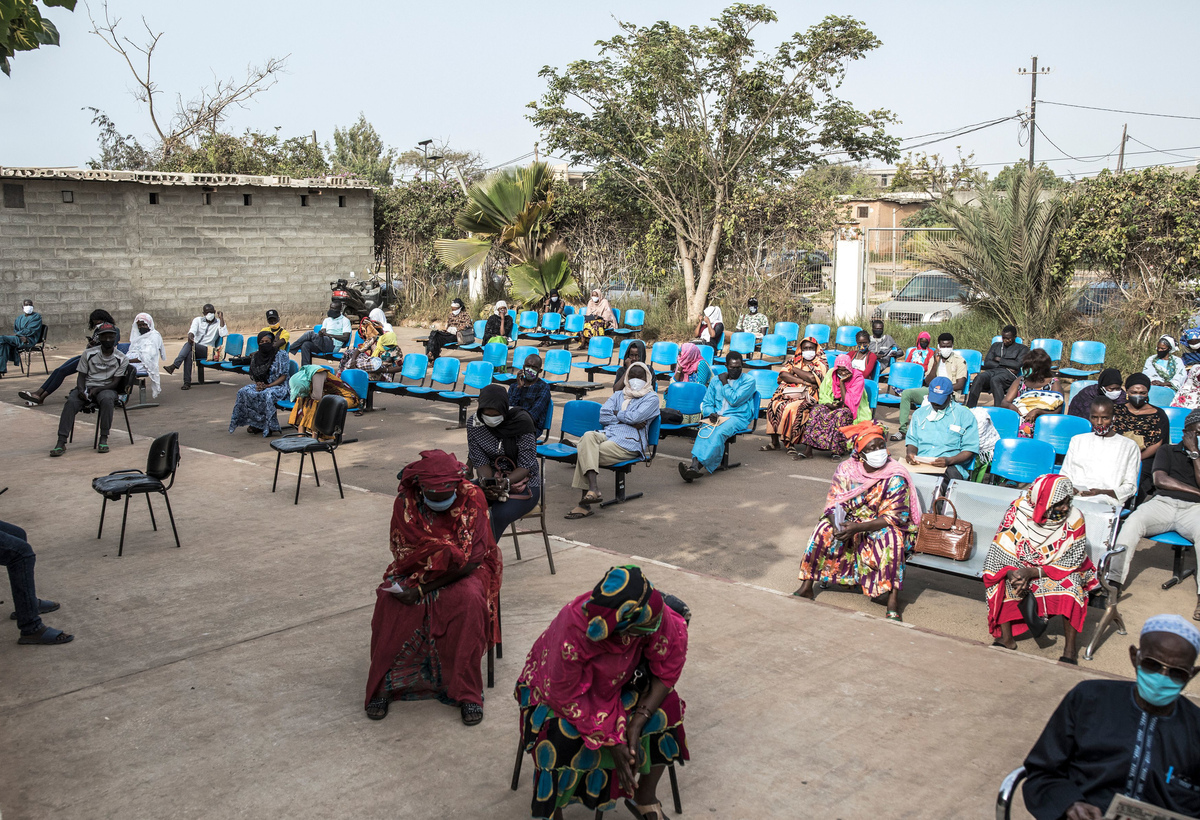 Patients entering the Pikine Hospital in Dakar on April 23.

Every morning at a few minutes after 10 a.m. Dakar time, an official from Senegal's Health Ministry walks calmly to a podium, usually with a face mask pulled across his or her face – so there's no visual clue as to whether the days COVID-19 case count is good news or cause for worry. The official reaches the microphone and begins a routine that has become a daily staple in Senegal since the outbreak began here in early March.

First, the official lists the results of yesterday's COVID-19 tests. (In Senegal, test results are routinely known within 24 hours). In a monotone voice, the official reads off multiple figures — number of new cases, the number of those new cases who were known contacts (so already in isolation), the number who were infected by community transmission, the number of recovered patients, and more.

More than two months into the outbreak the country of almost 16 million people has registered more than 2,400 positive cases and 25 deaths.

As people watch, they chime in on Facebook with emoji-laden comments: "Almost 1,000 sick, that is scary ...."49 recovered "... "It's time for us to learn how to live with COVID-19 as we do with malaria, HIV, hypertensions. if not it will be a catastrophe. We cannot rest at our homes anymore. Two months is too long."

And every time a death is announced, the official adds a personal note: "Senegal registered its 13th death from COVID-19 Tuesday, May 5, 2020. The death was a 94-year-old man. The Minister of Health and Social Action offers its condolences to his family."

In this country of 16 million known for its peaceful democracy and sense of community, Senegal's response to the coronavirus is notable not only for its humanity but for its thoroughness. For example, each newly diagnosed individual – no matter how mild or severe the case – is provided a hospital or health center bed where he or she stays isolated and observed– a key element to Senegal's strategy to contain the virus.

"Senegal is doing quite well, and we were impressed at the beginning at the full engagement and commitment by the head of state," says Michel Yao, program manager for emergency response for the World Health Organization Africa.

Officials from both Senegal's ministry of health and WHO stress that the wheels of the response team were set in motion five years ago in response to the Ebola outbreak in West Africa. Yao explains: "What we advised countries to have in place following Ebola in West Africa was to have an operations center, to have in one place the required information for effective decision making. It's quite an important tool to control the crisis, and this was a good plan from Senegal to have this structure."

Senegal set up its Health Emergency Operation Center (also known by its French acronym, COUS), in December 2014, in response to the Ebola outbreak spreading in nearby countries. At the start of this year, the center had some 23 staff members – five of them doctors.

Over the past five years, that center, working with the ministry of health and the support of international partners such as the World Health Organization, the U.S. Centers for Disease Control and Prevention and UNICEF, have run simulations of mock outbreaks and crafted emergency measures to activate in case of an epidemic. 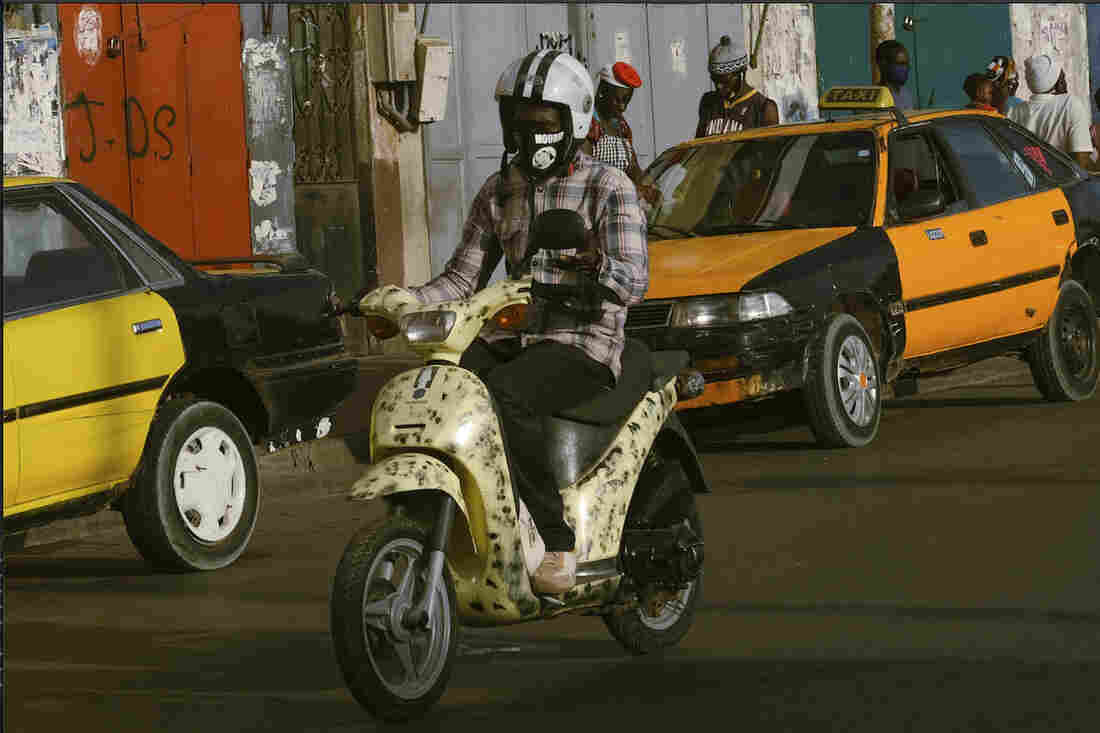 A motorbike rider in Dakar wears a mask with the silhouette of a local religious leader. Ricci Shryock/for NPR hide caption 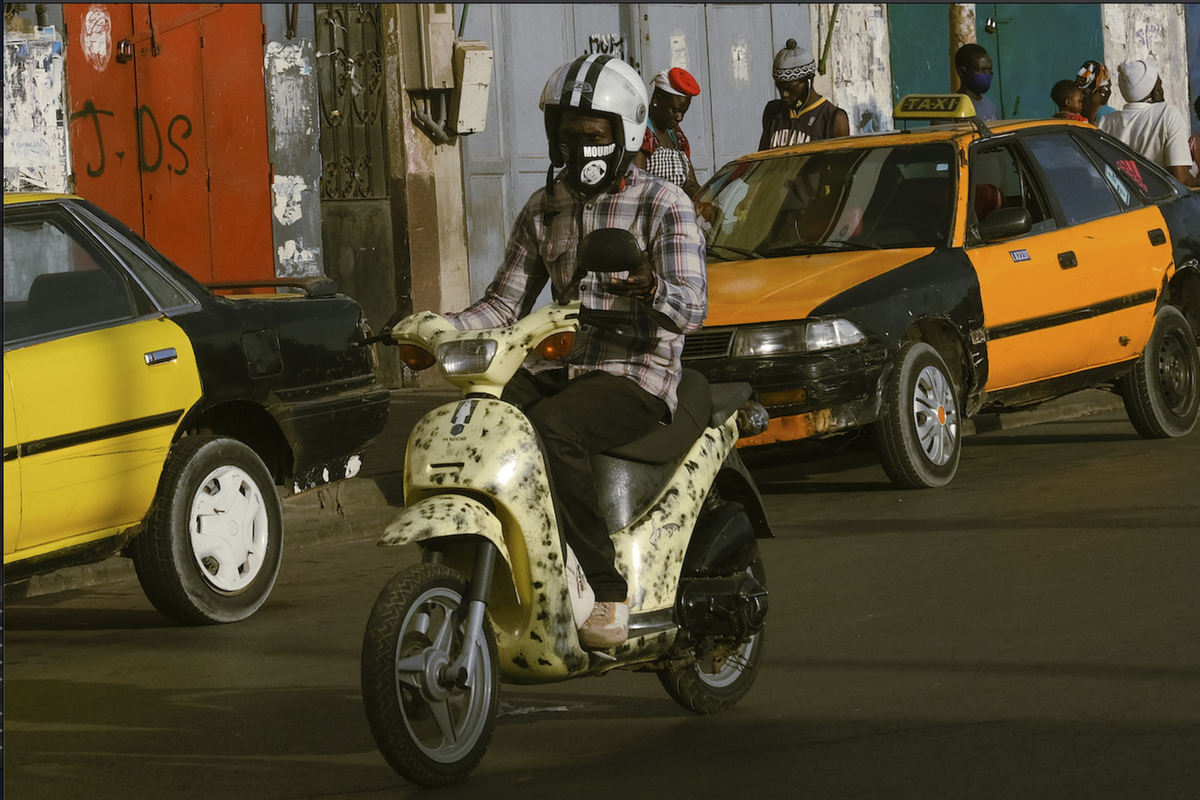 A motorbike rider in Dakar wears a mask with the silhouette of a local religious leader.

That half a decade of preparation was set into motion on March 2. In an uncanny coincidence, Senegal's president Macky Sall was meeting with health officials to finalize the country's COVID-19 contingency plan hours before the first case was confirmed at the Pasteur Institute lab down the street from the Presidential Palace where they were meeting — a traveler returning to Dakar, the capital city, from France.

"We must not wait for it to fall on us, to react," President Sall said of the virus as he outlined the agenda before the meeting.

In fact, says Dr. Abdoualye Bousso, director of COUS, Senegalese health officials had started forming their contingency plan in January after receiving an alert on January 10 from an international network of health agencies they follow closely.

Bousso added they knew that to hospitalize every positive case and isolate all contacts would be a challenge in a country where hospital equipment is in short supply. At the start of the outbreak, there were only 86 ICU beds able to provide oxygen support in public health facilities, he says.

"The first issue was to find beds for eventual cases," Bousso says. For the first step his team and partners added 500 beds, mostly in existing health-care facilities. By early May they had upped that to 900 new beds in health centers and hospitals, with another 300 beds for milder cases in hotels. The plan is to scale up by another 700 beds dedicated to COVID-19 patients by the end of May.

This strategy of a bed for every case – no matter how mild the symptoms — –has helped stop the spread of the virus in a country where most people live in large family households where it's nearly impossible to self-isolate, says Nicolas Mouly, head of emergency services for ALIMA, an international health organization working with the Senegalese government to ramp up health-care facilities. "They could contaminate other people if they were home," he says of the milder cases.

Senegal has also set up contact tracing teams working out of 78 district health centers, supported by the Red Cross and the World Health Organization but headed by local staff to build trust, Bousso stresses. By May, the budget for Senegal's response was $160 million.

Once the contacts are identified, adds Bousso, they are quarantined in a hotel room for two weeks, with meals provided.

These vast preparations and quick actions were also needed because Senegal's health infrastructure is not adequate and could be easily overwhelmed. According to WHO, there are an estimated 7 physicians per 100,000 people.

Like many countries around the globe, Senegal has taken other measures to control the spread of COVID-19. With 47 total positive cases recorded by March 20, Senegal had already closed its borders to air traffic, put schools on hiatus, enforced a curfew and shuttered many gathering spots, such as restaurants and mosques.

To help the working poor during confinement, in March, President Sall announced an Economic and Social Resilience Program that will among other actions pay the electricity bills of some 975,522 households for six months and purchase food for one million eligible households.

Despite praise for the president's initial actions, there have been some missteps and controversies.

After initially closing down mosques in mid-March (prompting at least one protest by hundreds of worshipers in a Dakar neighborhood), the president eased restrictions on May 11 — the day Senegal registered 177 new positive cases — its highest number. Sall said houses of worship (as well as businesses) could reopen the next day.

Hady Ba, a professor of cognitive science and philosophy at the University of Dakar and an expert on Senegalese politics, says the sudden opening of the mosques most likely reflected pressure from Senegal's powerful Muslim leaders on the government during the month of Ramadan. "We have these religious leaders asking to be authorized to pray," he says, noting that religious leaders have always had a powerful sway in politics. 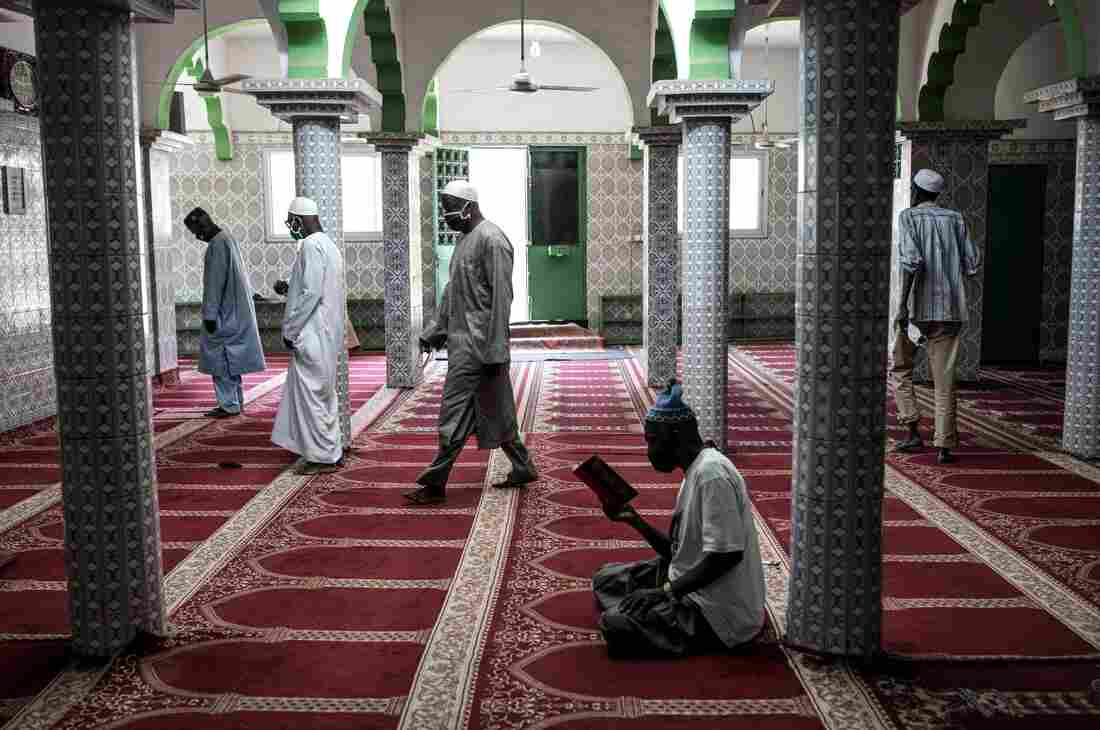 There have been other concerns as well. Early on, the police in some areas assaulted people with batons for being out in the streets past curfew. Shortly afterward, the police issued a statement apologizing for "excessive force."

And part of the country's current treatment plan includes the controversial strategy of treatment with the anti-malarial drug hydroxychloroquine, backed by Dr. Moussa Seydi, head of infectious and tropical medicine at Dakar's Fann Hospital – despite warnings from the World Health Organization about the potential risks and dangers of using such untested medicines.

So far, officials in Senegal say they have kept the numbers low enough to stick the strategy of a bed for every case and isolation for contacts as well. And officials at the Pasteur Institute are working on a test that would give results in 10 minutes. The WHO representative in Senegal, Dr. Lucile Imboua, says she is hopeful this test will be successful.

For the moment, Bousso is hopeful that Senegal will keep its case counts low, despite steadily rising case numbers in both the political capital of Dakar and the country's largest holy city, Touba.

He's also realistic about how hard that might be.

"We can stop the fire in our country but the fire is still going in other countries.." he says, trailing off before he has to run to another urgent meeting.

Ricci Shryock is a freelance photographer and journalist based in Dakar, Senegal. Follow her on Instagram at @ricci_s.