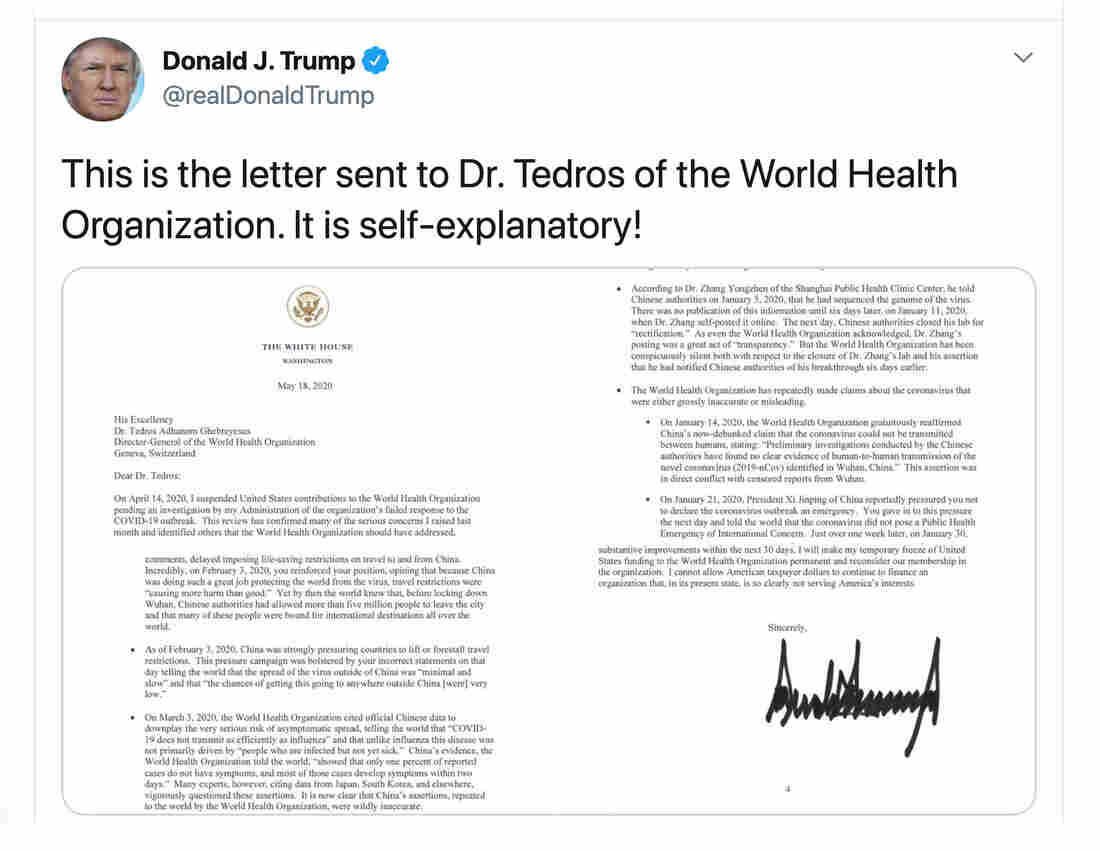 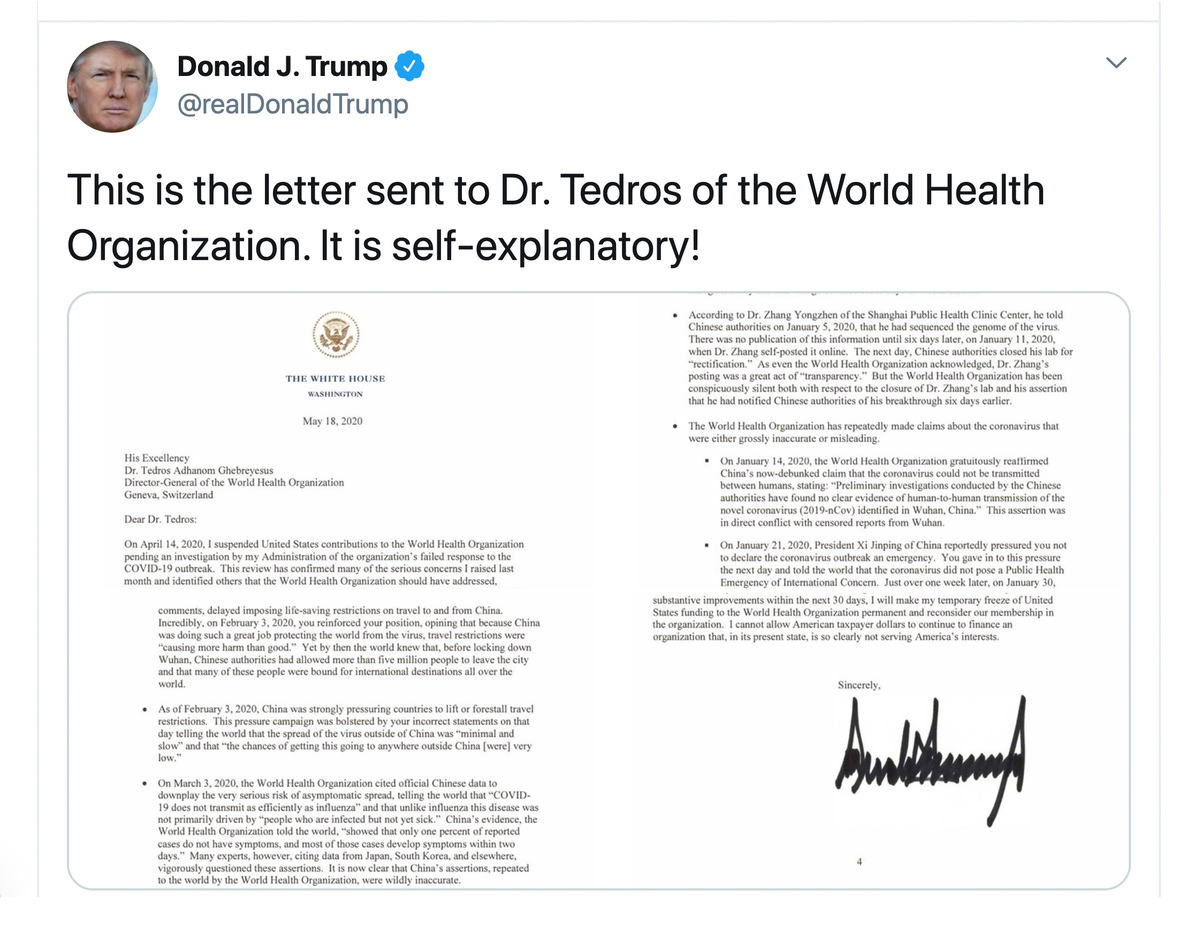 A portion of the letter that President Trump addressed to World Health Organization Director-General Tedros Adhanom Ghebreyesus, posted late Monday night on Twitter in the midst of WHO's annual assembly.

As the world seeks to join together to bring the novel coronavirus under control, President Trump has sent a letter to the World Health Organization threatening that the U.S. will halt all funding and consider leaving the agency, pending an assessment of its response to COVID-19.

The timing of the letter added to its shock value: Trump sent out a tweet at 10:55 p.m. Monday, in the midst of WHO's annual assembly, announcing that he'd sent the letter. The tweet included the letter's full text and stated that his allegations of incompetence on the part of WHO were "self-explanatory."

WHO responded cautiously: "We have of course received the letter, and we are looking into it," Tedros Adhanom Ghebreyesus, director-general of WHO, said at a press conference Wednesday. Pressed by NPR on what exactly the Trump administration is asking for in terms of changes at WHO to keep the U.S. from leaving the organization, Michael Ryan, executive director of WHO's Health Emergencies Program, said, "I think you might want to point that question to them."

WHO Spokeswoman On Trump's Threat To Cut Funding Permanently

"I found the letter full of unsubstantiated interpretations of certain events," said Kelley Lee, a global health professor at Simon Fraser University. A U.S. withdrawal from WHO would seriously compromise efforts to unite and provide proper funding for a global response in a "profoundly important moment," Lee said.

NPR spoke to global health experts in the U.S., Canada and Switzerland and examined the public record to provide context for some of the assertions in Trump's letter (reprinted in bold below). The full text of the letter can be read at the end of this post.

"The International Health Regulations require countries to report the risk of a health emergency within 24 hours. But China did not inform the World Health Organization of Wuhan's several cases of pneumonia, of unknown origin, until December 31, 2019, even though it likely had knowledge of these cases days or weeks earlier.

"Even now, China continues to undermine the International Health Regulations by refusing to share accurate and timely data, viral samples and isolates, and by withholding vital information about the virus and its origins. And, to this day, China continues to deny international access to their scientists and relevant facilities, all while casting blame widely and recklessly and censoring its own experts."

China's delays in providing information and lack of sharing are what Lawrence Gostin, a global health professor at Georgetown University Law Center, calls "two truths in the president's letter."

First, Gostin said China was not transparent early on in the outbreak.

"China was anywhere from two to even up to six weeks' late in reporting to the World Health Organization," Gostin said, noting there's evidence that Chinese health authorities knew the coronavirus was circulating in December and that their delays in reporting likely "seeded the epidemic" through East Asia, Europe and the United States.

Second, while China quickly shared the genome sequence for the coronavirus, "it has not been as forthcoming with sharing biological samples which are needed for epidemiology and also for vaccines and treatments," Gostin said.

But Gostin said blaming WHO for China's reporting delays and sample hoarding is misdirected. Of these charges by Trump, he said: "They're valid critiques of China but not the World Health Organization.

"The World Health Organization consistently ignored credible reports of the virus spreading in Wuhan in early December 2019 or even earlier, including reports from the Lancet medical journal. The World Health Organization failed to independently investigate credible reports that conflicted directly with the Chinese government's official accounts, even those that came from sources within Wuhan itself."

The Lancet, a respected medical journal, said: "This statement is factually incorrect." In a note shared on Twitter, the journal said it published its first papers on the novel coronavirus on Jan. 24. In two papers published that day, researchers from China and Hong Kong described the first 41 patients in Wuhan and provided scientific evidence for human-to-human transmission.

WHO also disagrees with the charge that information relevant to the coronavirus was reported in early December. WHO said its representatives first learned of a cluster of pneumonia cases of unknown cause in Wuhan on Dec. 31 through the agency's epidemic surveillance system, which gathers reports and rumors of outbreaks.

"There are literally millions and millions of cases of atypical pneumonia around the world every year, and in the middle of an influenza season sometimes it's very difficult to pick out a signal of a cluster of cases," WHO's Ryan said at a press conference April 15. "In fact it's quite remarkable that such a cluster was ultimately picked out of 41 confirmed cases in Wuhan."

WHO has repeatedly said this assertion is false. Taiwan's health authorities also said they did not officially report to WHO that human-to-human transmission was happening by Dec. 31.

Taiwan's Ministry of Health and Welfare shared the email its Centers for Disease Control sent to WHO on Dec. 31: "News resources today indicate that at least seven atypical pneumonia cases were reported in Wuhan, CHINA. Their health authorities replied to the media that the cases were believed not SARS; however, the samples are still under examination, and cases have been isolated for treatment. I would greatly appreciate it if you have relevant information to share with us. Thank you very much in advance for your attention to this matter."

Tedros said this note from Taiwan made no direct references to human-to-human transmission and simply requested clarification on reports Taiwan's health officials were seeing about a pneumonia cluster from China.

"On January 28, 2020, after meeting with President Xi [Jinping] in Beijing, [Tedros] praised the Chinese government for its 'transparency' with respect to the coronavirus, announcing that China had set a 'new standard for outbreak control' and 'bought the world time.' You did not mention that China had, by then, silenced or punished several doctors for speaking out about the virus and restricted Chinese institutions from publishing information about it."

The World Health Organization did praise China at that point. "The United States was equally praising China at the time," Georgetown Law's Gostin pointed out.

On Jan. 24, Trump tweeted: "China has been working very hard to contain the Coronavirus. The United States greatly appreciates their efforts and transparency. It will all work out well. In particular, on behalf of the American People, I want to thank President Xi!"

"The only way forward for the World Health Organization is if it can actually demonstrate independence from China. My Administration has already started discussions with you on how to reform the organization. But action is needed quickly."

This demand comes with no specifics, global health observers said. "What exactly does the Trump administration want WHO to do?" Simon Fraser's Lee asked. It's not clear what "action" the U.S. is asking for, or how WHO could demonstrate "independence from China," because no solutions are outlined in the letter.

As for the threat of U.S. withdrawal, Gostin said he thinks the U.S. is unlikely to follow through with leaving WHO, because he does not believe Congress would approve such a move.

Still, Trump's threats are already causing substantial damage to the global agency tasked with coordinating the world's response to the pandemic, said Benjamin Mason Meier, associate professor of global health policy at the University of North Carolina at Chapel Hill.

"For the United States to blame the World Health Organization for its own months and months and months of inaction seems factually untrue and designed to divide the world at a moment when global solidarity is needed most," Meier said. "It undercuts the World Health Organization's efforts to provide a collective response to this common threat [of the COVID-19 pandemic]."

Jason Beaubien and Pranav Baskar contributed to this story.