Accessibility links
How Some Countries Brought New Coronavirus Cases Down To Nearly Zero : Goats and Soda It's a diverse mix of places — New Zealand, Vietnam, Germany, Costa Rica. We look at the keys to their success in controlling the coronavirus.

Over the past month, Hong Kong has averaged one new confirmed coronavirus case a day.

Taiwan has reported only one case in the past three weeks. The situation is similar in Vietnam. Although the number of coronavirus cases continues to grow globally, there are places that have managed to successfully control COVID-19.

Perhaps the greatest success story is New Zealand, which has stopped local transmission and has a plan to completely eliminate the virus from its territory.

"The lesson is that it can be done," says Siouxsie Wiles, an associate professor of microbiology in New Zealand. "Obviously, the longer you leave it, and the more cases there are, the harder it becomes. But that doesn't mean that we shouldn't try."

Wiles heads up the Bioluminescent Superbugs Lab at the University of Auckland. Much of her work focuses on antibiotic resistance and infectious diseases. When the coronavirus hit, she got involved in communication efforts in New Zealand to help explain the virus, including by using a popular cartoon.

But it wasn't just scientists who led the charge. Wiles — and many other New Zealanders — give much of the credit for their country's success to the swift and decisive leadership of Prime Minister Jacinda Ardern in March. 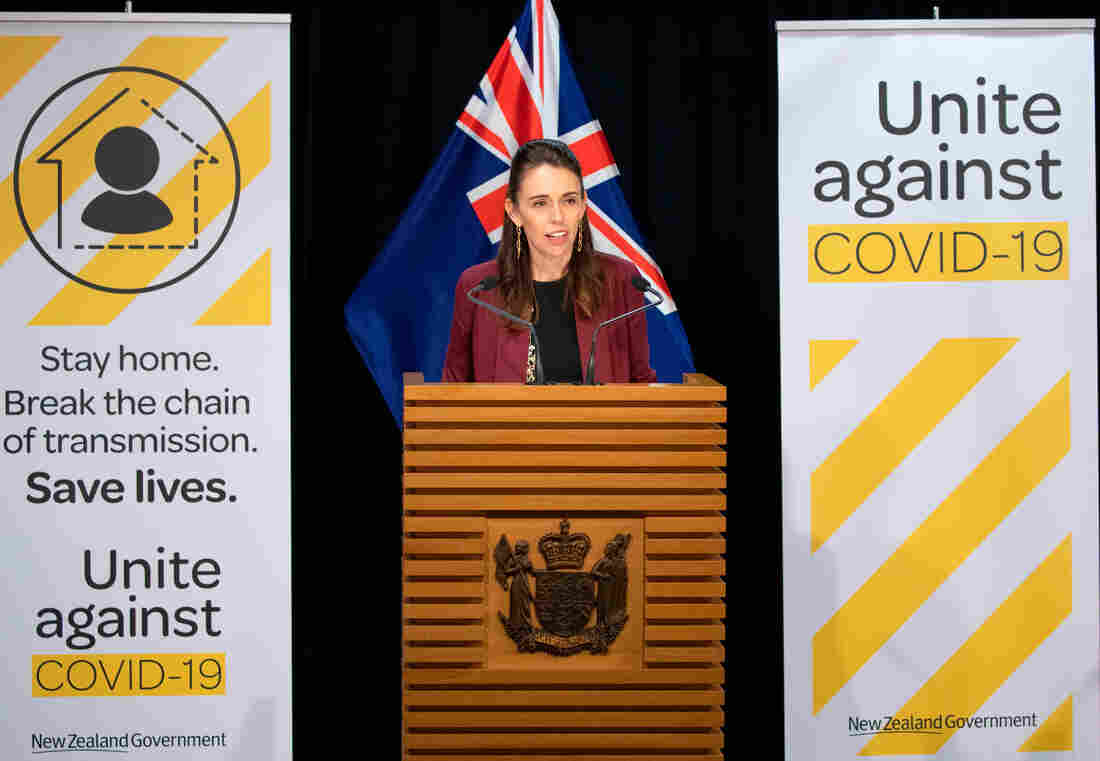 Jacinda Ardern, the prime minister of New Zealand, briefs the media on COVID-19. She issued a call for New Zealanders to protect one another from the health threat. Mark Mitchell/Pool/AFP via Getty Images hide caption 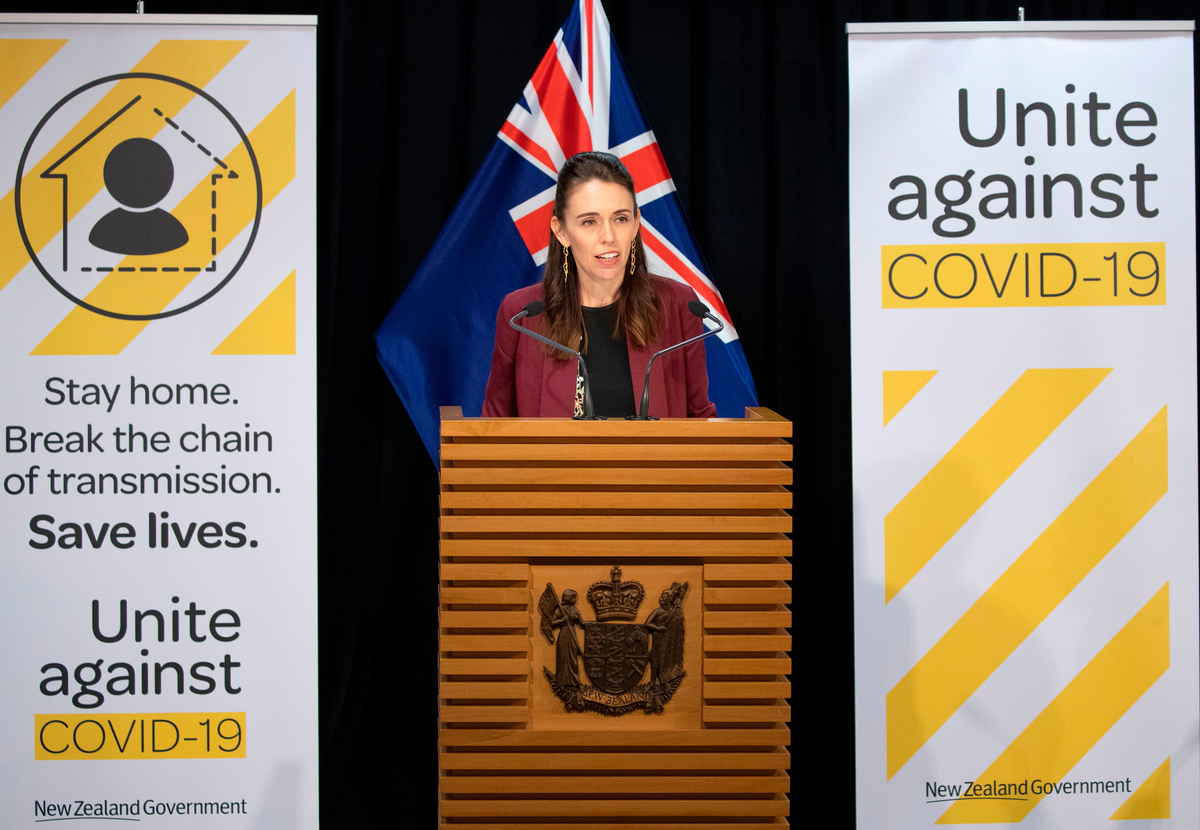 Jacinda Ardern, the prime minister of New Zealand, briefs the media on COVID-19. She issued a call for New Zealanders to protect one another from the health threat.

"Our prime minister made the decision that she did not want what was happening in Italy to happen in New Zealand," Wiles says. In mid-March, as cases were exploding in Italy and Spain, Ardern ordered anyone entering New Zealand into quarantine. At that point, the country had confirmed just six cases. A few days later, on March 19, Ardern shut down travel to the country, essentially banning all foreigners from entering the island nation of 4.8 million.

She took to the national airwaves to explain a four-stage lockdown system that New Zealand would use to confront the health crisis. "I'm speaking to all New Zealanders today to give you as much certainty and clarity as we can as we fight COVID-19," she said in a nationally televised address on March 21.

Ardern called the threat "unprecedented," but she was calm and reassuring. "Here's how we'll know what to do and when," she said as she laid out plans to shut down schools, most businesses and domestic travel.

Wiles at the University of Auckland says that the prime minister did something quite interesting, "which was that unlike many other countries, she never put us on a war footing."

So Ardern's speeches weren't about attacking an invisible enemy — as many world leaders would say.

Instead she called on New Zealanders to confront this crisis by protecting their fellow citizens.

"She talked over and over about us being a team of 5 million and that we all do our part to break these chains of transmission and to eliminate the virus," Wiles says. "I think that has been one of the really crucial things — everybody knowing how they had to behave and that they were behaving for the good of everybody."

Wiles heard the prime minister's calls for everyone to come together so many times that she refers to it as Ardern doing her "united thing."

New Zealand is now reopening most businesses and is even talking about complete elimination of the coronavirus from its territory.

As of late May, New Zealand had had roughly 1,500 cases and fewer than two dozen deaths from COVID-19.

Several nations in Asia have had far larger outbreaks but have managed to bring the disease under control.

For example, South Korea has reported more than 11,000 cases. In late February and early March, South Korea was reporting about 750 new cases a day. Now the country is down to an average just a few dozen per day.

Gi-Wook Shin, the head of Walter H. Shorenstein Asia-Pacific Research Center at Stanford University, says the most successful countries all did some things similar to New Zealand.

"There are some common threads," Shin says. One is very swift and effective action by the state against the outbreak.

Hong Kong, Taiwan, Vietnam and South Korea all either banned incoming visitors early in the outbreak or placed them in two-week quarantines. South Korea quickly developed its own testing system.

"In those countries in Asia, absolutely, they believe that the state, the central government, is responsible for intervening and then solving this problem," Shin says.

Another clear trait of the successful responses against COVID-19 is that they've all been "apolitical." The efforts haven't been framed as coming from one political party or another but rather as efforts for the good of everyone.

The successful Asian countries had national plans, and the leaders articulated them to their people.

"If you look at like Korea, Taiwan, Vietnam or maybe even Hong Kong," Shin says. "The message from the central government was very clear, very straightforward, very coherent and, I think, very effective."

Countries in other parts of the world have also managed, for various reasons, to tame COVID-19.

Many nations in the Caribbean have corralled the virus after it arrived on their shores. In addition, Costa Rica, Iceland and Rwanda have also reduced spread to extremely low levels. Mauritius has only reported two cases since April.

In Europe, Germany is still dealing with hundreds of cases a day, but it brought transmission down faster and with far fewer deaths than most other countries in Europe. On March 18, German Chancellor Angela Merkel did something that she had never done before while in office. She took to the airwaves and gave a televised national address. The topic: explaining her plan for how to tackle the coronavirus outbreak. "It is serious," Merkel said of the virus. "Take it seriously."

Jana Puglierin, a senior policy fellow at the European Council on Foreign Relations in Berlin, says Merkel going on TV to give a speech in a crisis was very unusual for her.

"She has never done that in any of the previous crises, not in the migration crisis, not during the eurozone crisis. So this was really a first for her," Puglierin says.

As a public speaker, Merkel has a reputation as being cold.

"But in this speech, she really managed to connect with the people," Puglierin says. Merkel brought Germans on board to fight the outbreak. She told them that the only way to overcome this crisis was for every German to accept it as their own responsibility to reduce the spread of the virus. "She convinced them that this was necessary," Puglierin says.

Merkel added that since the end of World War II and national reunification, there has been no other challenge that depends as strongly on Germans working together.

"She was very human, very approachable, very transparent and very clear in her message," Puglierin says. And it also helped that Merkel is a scientist, with a doctorate in quantum chemistry. She understood the science behind the outbreak. "And she has this tremendous gift of explaining everything that is related to that virus in a very clear and understandable way for ordinary citizens."

Germany is still dealing with coronavirus transmission but has brought its daily case numbers down significantly. Parts of the country are starting to reopen. Things aren't perfect. Some of the reopening is fairly chaotic. Students are going back to school at different times.

"My kids, for example," Puglierin says. "One goes to school once before the summer break starts. The other goes every third day, and the neighbor kid goes every day. So that adds to a lot of frustration."

But there's a feeling that things are moving in the right direction. Case numbers in Germany are going down. Millions of students are returning to school. That's the kind of progress that so many people around the world desperately want to see.