Accessibility links
She Biked 700 Miles To Take Injured Dad Home, Won Fame, Sparked Debate : Goats and Soda Her father got injured. She came to care for him and took him home via bike. Now she's reportedly signed to star in a Bollywood film based on her life. But some ask: Why was this her only option? 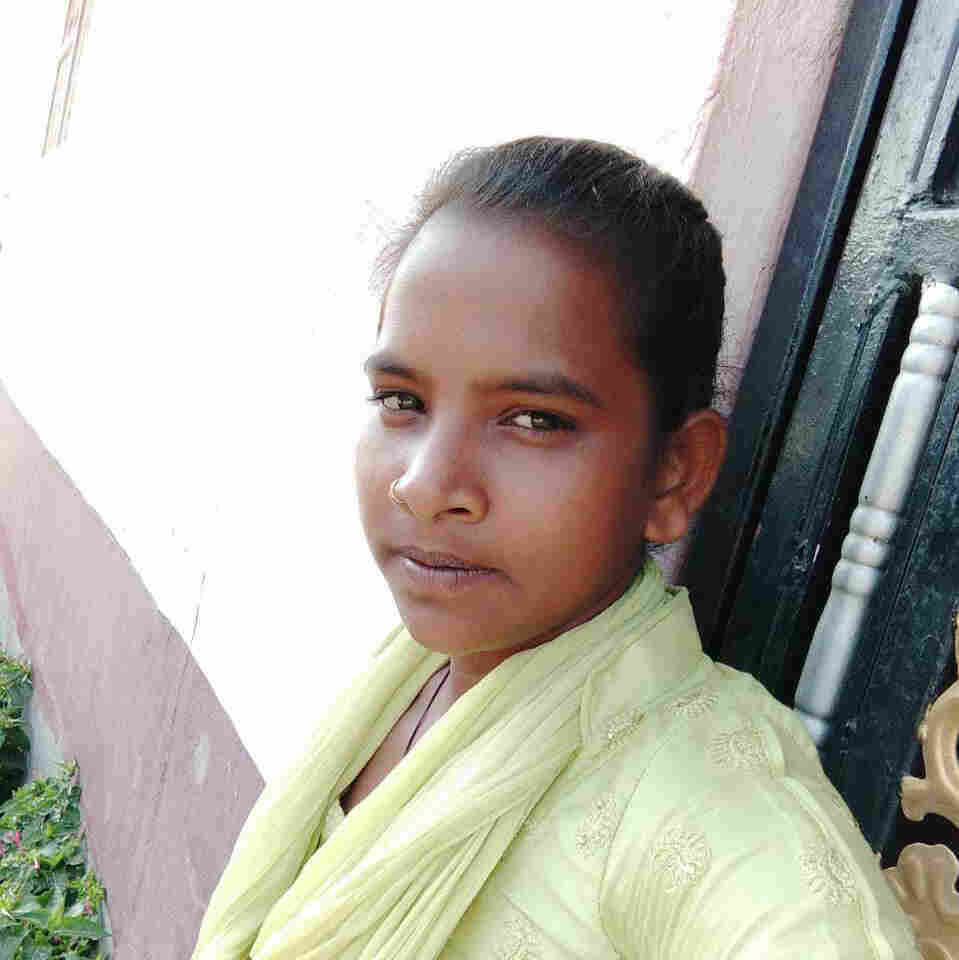 Jyoti Kumari, 15, pedaled more than 700 miles with her father seated behind her on a $20 bicycle to bring him from New Delhi, where he'd been injured, to the family's village. Jyoti Kumari hide caption 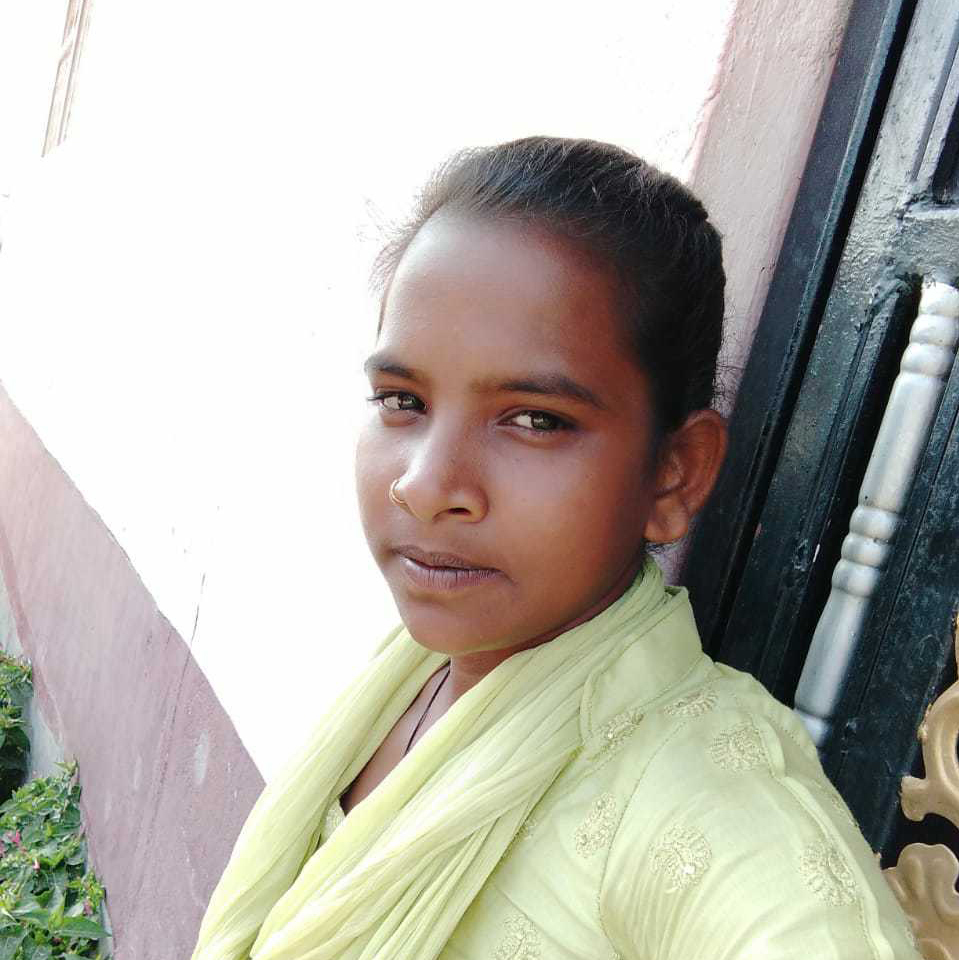 Jyoti Kumari, 15, pedaled more than 700 miles with her father seated behind her on a $20 bicycle to bring him from New Delhi, where he'd been injured, to the family's village.

When her father got hurt, a 15-year-old Indian girl used their last $20 to buy a rickety, hot pink bicycle, and pedaled him more than 700 miles to their home village across India — in a heroic, life-saving ride while under coronavirus lockdown.

The story of Jyoti Kumari's epic bike ride has made her a media celebrity, prompted praise from Ivanka Trump and won her offers to try out for India's Olympic team and star as herself in a Bollywood movie.

It also launched a debate about whether the real story is the fact that the teenager felt she had no other way to get her father to safety.

In January, Kumari's father, Mohan Paswan, a tuk-tuk driver, was injured in a traffic accident. He lives in Gurugram, a suburb of New Delhi, India's capital, and works long hours ferrying passengers on his motorized rickshaw. Paswan sends money home to his wife and children in the eastern state of Bihar, more than 700 miles away.

But after the accident, Paswan couldn't drive. He needed care. So Kumari hopped on a cross-country train and moved in with her father to nurse him back to health.

Then the pandemic hit.

The coronavirus has killed about 5,600 people in India, out of a population of nearly 1.4 billion. But a nationwide lockdown — the biggest in the world — meant that Paswan, even as he healed from his injuries, couldn't get back on the road.

He exhausted what little savings he had. He couldn't send money home for four months. He could no longer afford the rent on his tiny room, which by then he was sharing with his daughter. By early May, they had the equivalent of about $20 left, Kumari recalls.

"We were being evicted. We were running out of food," she told local TV. "So I said, 'Papa, let's go. Let's use the last of our money to buy a bicycle and pedal home.' "

At first, Paswan dismissed the idea. Their home is on the other side of the country — some 700 miles away — and he still wasn't able to pedal because of his injuries.

"I said, 'How could we possibly go that far — the two of us on one bicycle?' " Paswan told NPR in a phone interview. "But she convinced me. If we stayed, we would have starved to death. We had to at least try."

So with their remaining cash, they bought a hot pink girl's bicycle with no gears and a basket affixed to the front. On May 8, they set off — with the father on the bike seat, all their belongings in a duffel bag strapped to the back and his daughter pedaling — while standing up in front of him.

"There were so many things running through my mind. I was scared. Would we make it?" Kumari told another local TV reporter. "My arms and legs were aching, but I got strength and courage from all the people we met along the way."

Kumari's extraordinary effort is part of a much bigger story. For more than two months, India's highways have been clogged with migrant workers trying to get home. During the coronavirus crisis, some 100 million people in India have lost their jobs. Many, like Paswan, got stranded in big urban centers, far from family. Their only chance at survival is to reach their home villages.

But from late March until early May, India's public transit was shut because of the lockdown. So millions tried to walk home. Some migrants starved to death on the side of the road.

The government also added additional passenger trains to ferry laborers home. But in May, at least 80 people died on those trains. Many of the passengers are so weak and hungry when they board that they can't survive the journey. Last week, a heartbreaking video went viral, depicting a toddler trying to wake up his dead mother, on the floor of a train station in Kumari's home state of Bihar.

Fortunately for Kumari, food was not a problem on her epic journey. She says people gave her and her father food along the way. They slept on the side of the road. Somewhere in the middle of their journey, a truck driver gave them a lift for about 30 miles, the girl says. 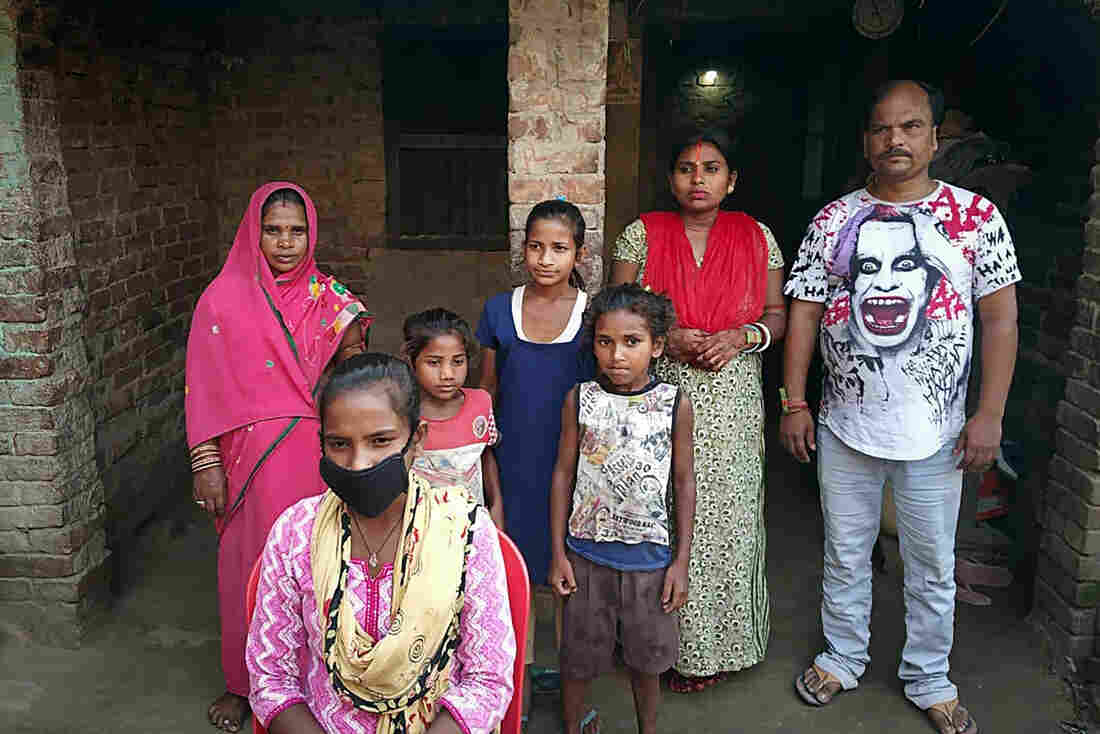 Jyoti Kumari (center, foreground, in mask) and family members stand in front of their house in Siruhulli, a village in eastern India. Stringer/AFP via Getty Images hide caption 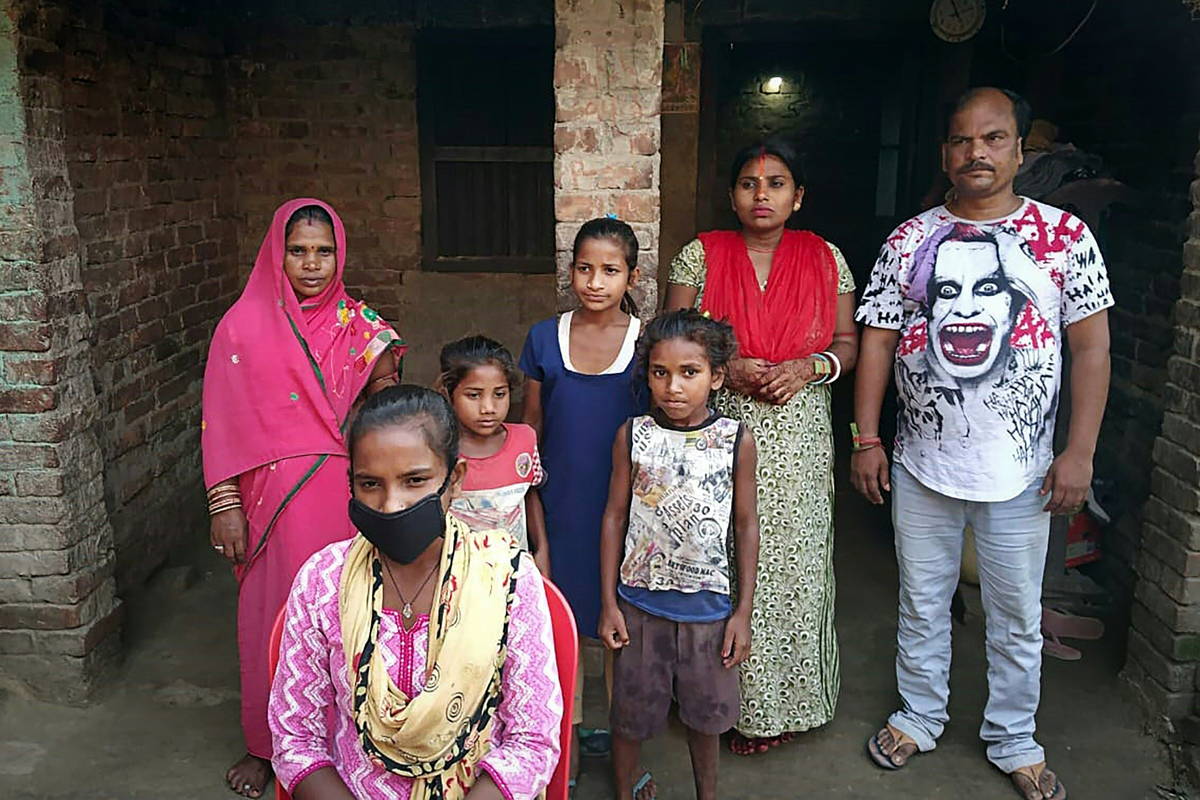 Jyoti Kumari (center, foreground, in mask) and family members stand in front of their house in Siruhulli, a village in eastern India.

After seven days, on May 15, they rolled into their family's village of Sirhulli in the eastern state of Bihar. They were met with celebrations.

Word of the ride spread quickly, and a few days later, Kumari got a phone call from the Cycling Federation of India.

"I called her up. She was quite confused. I told her that our aim is to make her a world champion," Onkar Singh, the federation's chairman, tells NPR. "We are looking at the Olympics 2024 and 2028."

He's invited Kumari, once the coronavirus crisis is over, to try out for the national team. He says what impressed him is not the distance she cycled. Tourists in Lycra do that often, he says. It's that Kumari cycled more than 100 miles a day — carrying another person on an old bike and on an empty stomach. "She's toiled so hard. She's done a job that even a man cannot do," Singh says. "So that kind of courage — the guts she has — she has to be rewarded for that."

Singh promised Kumari an all-expenses-paid trip to the capital New Delhi for the audition. If she makes the team, she'd live in a dormitory with other female cyclists, close to a training velodrome. Her housing, food and education would be fully funded by the federation, he said.

Since that offer, Kumari's life has been a circus. The Indian press has labeled her the "lion-hearted." She's been interviewed by journalists from Japan to America. A BBC News Hindi video of her riding her bike with her dad has gone viral.

And now, she's reportedly landed a deal to star as herself in a BollyAtamwood film about her epic cycling trip. An Indian company called Wemakefilmz bought the rights to Kumari's life story and plans to begin work on the project in August. The film's title will be Atmanirbhar — which means "self-reliant" in Hindi. It's also a slogan India's prime minister has used in his speeches descdribing the country's efforts to beat the coronavirus.

When NPR reached her by phone in her village, there were dozens of people at the family's humble home: TV crews, politicians with garlands of flowers and strangers asking for selfies. A pharmaceutical company showed up with a big check.

There's been no social distancing.

Kumari's story even got the attention of U.S. presidential adviser Ivanka Trump, who tweeted praise for Kumari, heralding what she called a "beautiful feat of endurance & love."

But Indians — from feminists to anti-poverty activists to journalists — accused the president's daughter of romanticizing poverty. They urged her to call out the Modi government instead, for leaving migrants like Kumari and her father in a desperate situation without adequate public aid.

"She did something brave. But it's something nobody should ever have to do," says Kirthi Jayakumar, a Chennai-based researcher, founder of the Gender Security Project, and one of those who criticized Trump's tweet. "Who wouldn't want to save their father? But circumstances made it so difficult, because of the lack of empathy in policymaking — the sheer absence of compassion and understanding of how a policy can impact different communities differently."

15 yr old Jyoti Kumari, carried her wounded father to their home village on the back of her bicycle covering +1,200 km over 7 days.

This beautiful feat of endurance & love has captured the imagination of the Indian people and the cycling federation!🇮🇳 https://t.co/uOgXkHzBPz

Awestruck as we are by Jyoti Kumari’s feat, let’s not celebrate her suffering to gloss over her pain, and the pain of millions. Her humanity shines against the inhumanity that forced her to cycle over a 1000 kms with her injured dad. #MigrantLivesMatter https://t.co/J1O8NUf7cg

No, Ivanka. Just. NO. This is an arduous, difficult journey that she was forced to embark on because of the complete lack of empathy in policymaking. Please stop making light of a major humanitarian crisis. https://t.co/UXsY3pHzF9

Migrant workers like Kumari's father bore the brunt of the Modi's government's early, strict lockdown, which Modi has credited for saving lives in the coronavirus crisis. But some economists and commentators blame the lockdown for exacerbating poverty in a country where half the population earns less than $3 a day.

"India was copying measures that rich countries take to protect public safety and welfare but that low-income countries cannot afford," Ruchir Sharma, chief global strategist at Morgan Stanley Investment Management, wrote in an op-ed in The New York Times over the weekend. "I was in touch with officials in other major emerging countries and none advocated total lockdowns because without the resources to support new armies of the unemployed, closing the economy would only lead to more hunger and death."

On Monday, India lifted a more than two-month-old nationwide lockdown outside of containment zones — neighborhoods with high concentrations of coronavirus infections. But separate state-by-state restrictions remain. Schools are still closed across India. Some restaurants, hotels and shopping malls may reopen June 8.

"We have the habit of making poster children, but we don't take care of the emotional wellness of the people we are venerating. I'm willing to bet there will be a film, with a Bollywood actress playing Jyoti, but things will not change on the ground," Jayakumar told NPR.

"How many more Jyotis are out there?" she asks. "Are we thinking about why Jyoti had to make that journey at all?"

As for India's newest celebrity athlete, Kumari herself sounds pretty overwhelmed. Her mother says she's not getting much sleep.

"I'm very happy," Kumari told NPR. But she's not sure what her future holds.

More than anything else, she says, she's just looking forward to going back to school. And she's still deciding what to do next.