Accessibility links
How To Stay Safe From The Coronavirus While Protesting In Public : Goats and Soda Also: If I head to a new state or country for a visit, do I need to self-isolate to protect others in case I'm contagious?

Coronavirus FAQs: How To Stay Safe While Protesting, When To Go Out After Recovery

Coronavirus FAQs: How To Stay Safe While Protesting, When To Go Out After Recovery 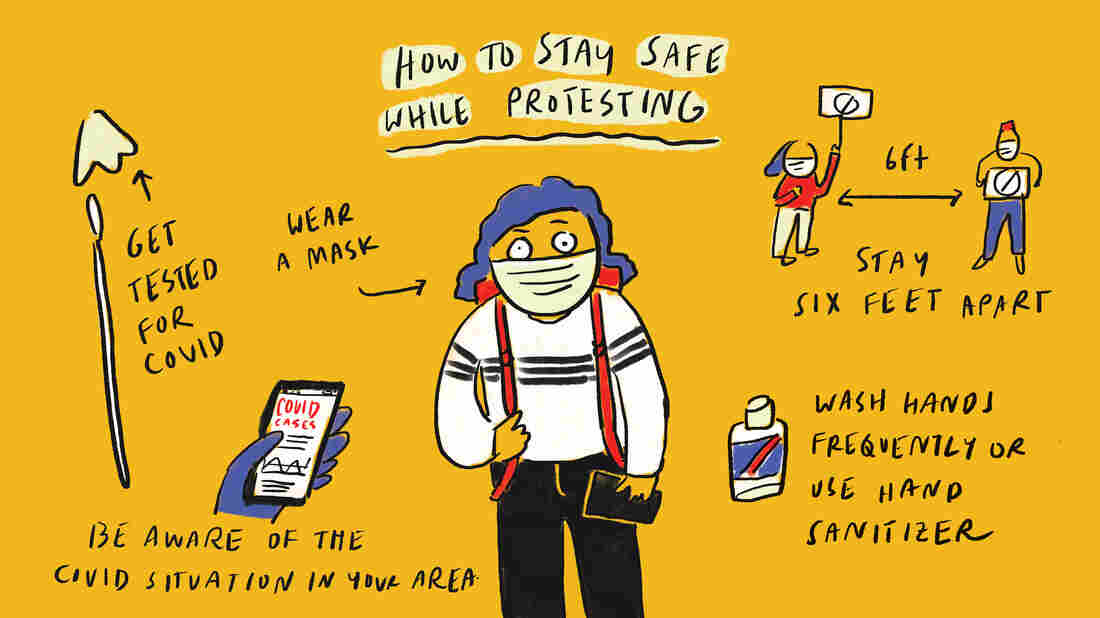 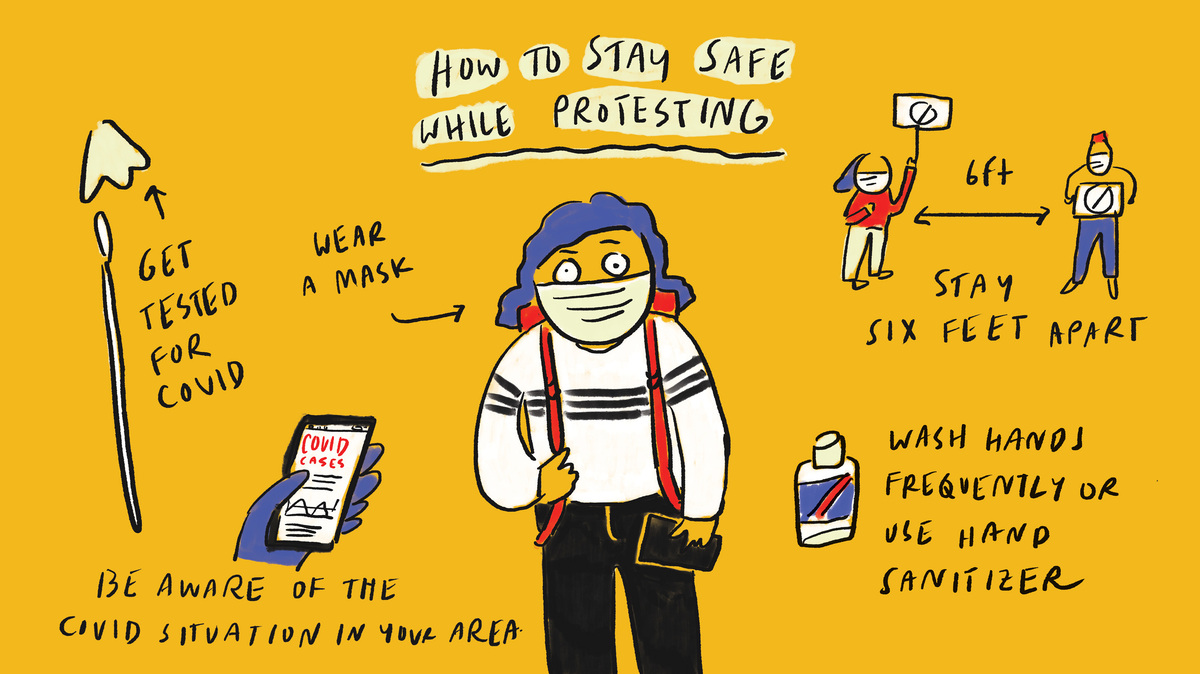 This is part of a series looking at pressing coronavirus questions of the week. We'd like to hear what you're curious about. Email us at goatsandsoda@npr.org with the subject line: "Weekly Coronavirus Questions."

What risks are there in attending a protest rally?

Modelers say it's difficult to assess how the protests will influence COVID-19 infections. But it's clear that a key ingredient for transmission is present at many of these rallies: close contact.

The images of protesters standing shoulder to shoulder — some wearing face masks, others not — raise concerns, especially in cities with higher rates of infection. Earlier this week Washington, D.C., Mayor Muriel Bowser said she was concerned about what mass gatherings in the streets "could mean for spikes in our coronavirus cases later." She urged protesters to consider their exposure and consider being tested.

"Testing everyone that participated in demonstrations would be useful in communities where many new cases are being reported every day. These new cases indicate that transmission is occurring at a high rate in the communities," said Bill Miller, an epidemiologist and physician at Ohio State University. He said there are several scenarios that could give rise to the spread of the virus or even a superspreader event, where a number of people become infected. For instance, "you might have a small number of infected people who are particularly active, moving around in the crowd. If one or more of these people are shouting often and not wearing a mask, the situation is a setup for a superspreader event," he said.

What's A 'Superspreading Event'? And Has It Happened With COVID-19?

He said an alternative to testing everyone would be active contact tracing. "With new cases, the tracers could ask about demonstration participation, including days and times," Miller said. Then, if cases are linked to a demonstration, a call could go out to get everyone who participated in that event to be tested.

Being outdoors seems to reduce the risk of exposure because the virus can't survive long in sunlight and there's better air circulation, but it's no guarantee against infection. So, to reduce your own risk, it's best to continue practicing social distancing and wear a face mask. There have been family-friendly events where protesters sit in a public space such as a park or library grounds, remaining 6 feet apart.

And, of course, remember to wash your hands – or use hand sanitizer – after touching others or shared surfaces.

If I tested positive for the coronavirus, how long should I wait before going back out into the world?

The first thing to keep in mind when it comes to COVID-19 is that all advice is preliminary — based on studies and cases experts have looked at so far. There is still a lot we don't know so guidelines and precautions may change, said Lawrence Gostin, director of the O'Neill Institute for National and Global Health Law at Georgetown University.

That said, if someone was infected with COVID-19, here are recommended guidelines for when it's safe to start going out to the grocery store and other public settings again.

The U.S. Centers for Disease Control and Prevention recommends waiting at least 10 days after the date symptoms started and at least three days after you've recovered to discontinue isolation.

Which raises a question: How do you know if you're recovered? "Recovery," according to the CDC, is defined as a resolution of fever, coupled with a progressive improvement in other symptoms – without reliance on fever-reducing medication.

"The idea is 10 days after your symptoms started, the chance of being able to actually isolate a live virus [in a patient] is so low — it's almost zero – so the chances of being infectious after that point is [also] very low," said Abraar Karan, a physician at Harvard Medical School.

But you do have to be careful in assessing symptoms and determining if they have truly ended. Sometimes symptoms can be severe for weeks. Some patients may see a brief abatement and then have symptoms recur or become more intense. A doctor's input is critical.

Also, some symptoms, such as loss of sense of smell, can take weeks to resolve fully, said Dr. Davidson Hamer, a professor of global health and medicine at Boston University.

When it comes to risk of contagion, the symptoms to be most concerned about are cough, fever and difficulty breathing, Hamer said — and those are the ones that should be completely resolved for at least three days before going out.

"People should not be out in public until at least three days after complete cessation of [these] symptoms," he said. "If they have fever, the fever should be gone, and they should not be taking Tylenol or something to suppress that fever."

The longer you can wait, the better, Gostin noted. He recommends waiting even 10 days after your symptoms are gone and then discussing with your doctor before going back to work or resuming your regular daily activities.

If you're asymptomatic but tested positive for the coronavirus, the World Health Organization recommends waiting 10 days from the time of the positive test before discontinuing isolation.

Karan said it's still possible to transmit the virus even after waiting 10 days from the day your symptoms hit – but it's pretty unlikely. "Everyone's going to be a little different," he said, "but most people fall within that 10-day window; it's considered to be relatively safe at that point."

And when you do decide to go out, experts said always use precautions such as wearing a face covering and practicing good hand hygiene — washing with soap or using hand sanitizer often and using antiseptic wipes to wipe down surfaces such as door handles and grocery store carts before touching them.

If I travel to a new city, should I quarantine or self-isolate once I get there?

Some states and countries have implemented mandatory quarantines for any travelers coming in, so the first thing to do is check the requirements for your destination point and make proper arrangements beforehand. For example, through June 30, Hawaii is requiring that anybody entering the state or traveling between its islands "quarantine for 14 days or the duration of their trip, whichever is shorter," according to a proclamation from Gov. David Ige's office.

If you're not entering an area that requires a quarantine period — or would still like some guidance to keep in mind when going to a new city — here are some of the most important risks to weigh.

All experts we spoke to, as well as the CDC traveling guidelines, agree that one of the main factors to consider when traveling during the pandemic is the rate of transmission in the area you're coming from and the rate in the area where you're headed. If you're coming from a place with a relatively high number of new cases each day, and you're not self-isolating, you may be infected and not yet realize it.

One precaution to avoid triggering any infections in your destination then is to isolate at home as much as possible for two weeks before departure and practice social distancing measures — such as wearing a mask and staying 6 feet away from others — anytime you do go out in public spaces. That way you lessen the risk of unknowingly bringing the virus with you into your destination.

"I think that [even] if somebody has been sheltered at home, has been really cautious and is very unlikely to be infected when they enter a new place, then that new place might [still] recommend that they be quarantined," said Boston University's Hamer. "But honestly, their risk of transmitting disease is probably close to zero because they haven't had any exposure [in their local community]."

But there is another way you could become exposed — your method of travel. If you drive alone with minimal stops, there's probably a lower chance that you have been exposed to a symptomatic individual than if you board a crowded bus or plane, said Karan of Harvard Medical School. Read more about the risks of driving versus flying here.

Self-isolation measures in a new location also depend on where you bed down once you arrive. If you're staying with friends or family, then you should discuss what precautions they have been taking before your arrival and make sure you're not exposing yourself to additional risk in their home.

"When we move from one place to another, it would be ideal to self-isolate for 14 days. But if not, try for at least five days," said Gostin, the global health specialist at Georgetown. "And when you do begin to relax measures and go back out into the world, take very special care. Be even more rigorous with your hand-washing, disinfecting, mask usage and social distancing."