Accessibility links
Why Dreams Of Eliminating The Coronavirus Did Not Come True : Goats and Soda There was early hope that the coronavirus could be contained and eliminated. But researchers now believe the virus is likely to be a continuing threat until a vaccine is developed.

Listen · 3:12 3:12
Nothing Like SARS: Researchers Warn The Coronavirus Will Not Fade Away Anytime Soon 3:12 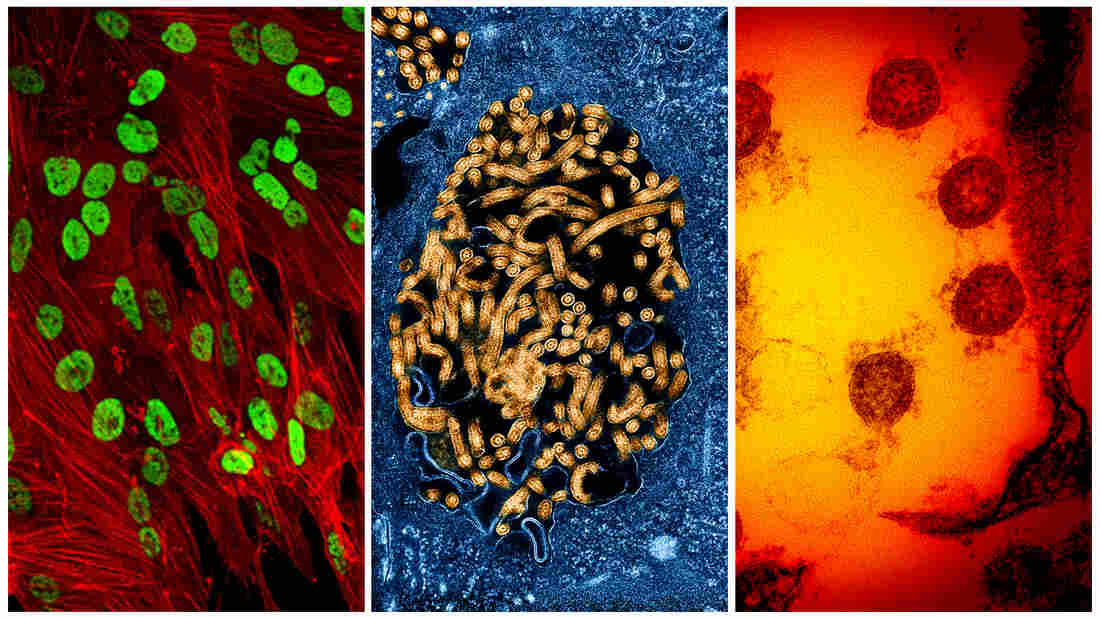 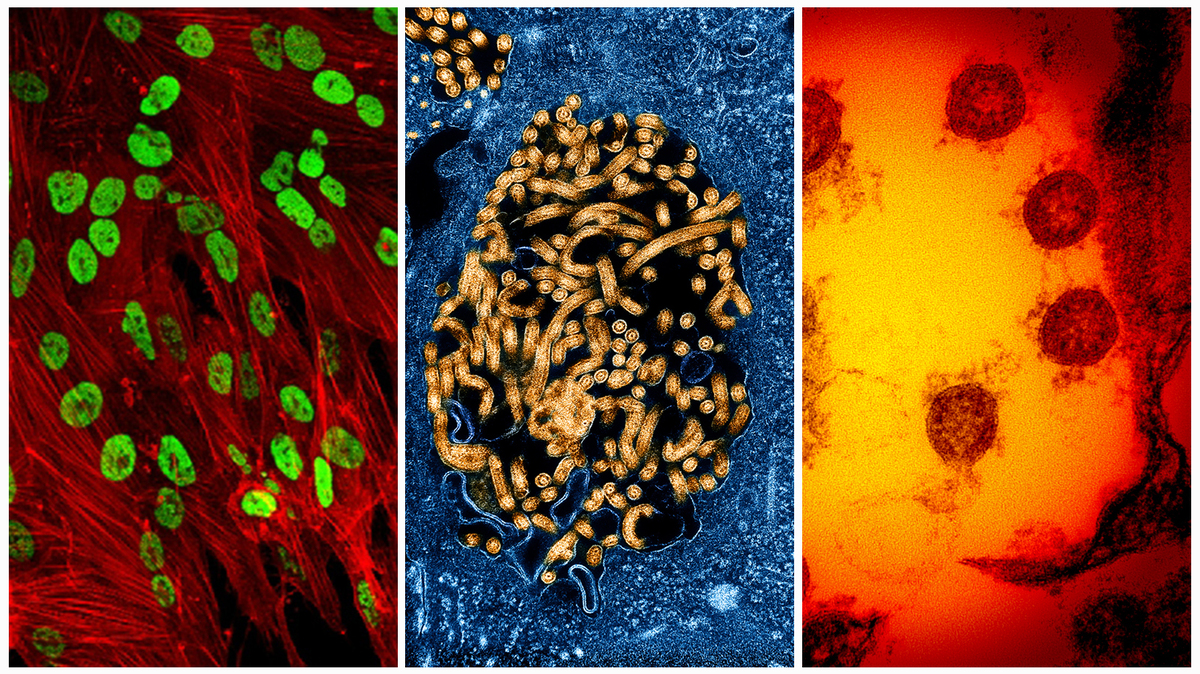 From left: Colorized transmission electron micrograph of herpes simplex virus, Ebola virus and SARS-CoV-2 virus particles. Researchers now believe the coronavirus is likely to be a continuing threat until a vaccine is developed.

Let's think back to the early days of 2020, before a pandemic was declared. A new virus had surfaced and was infecting humans but had limited global spread. The World Health Organization and other health officials hoped that this novel coronavirus could be contained and wiped out.

And it wasn't just wishful thinking. Less than two decades ago, another emerging coronavirus struck: SARS (severe acute respiratory syndrome). Health authorities were able to control it in eight months. No new cases have been found since 2004.

As late as March 2, WHO was still optimistic. "Containment of COVID-19 is feasible," said Tedros Adhanom Ghebreyesus, WHO's director-general. "With early, aggressive measures, countries can stop transmission."

Those who believed it could disappear were hopeful that the coronavirus wouldn't be able to tolerate the heat and humidity of summer — or that vast swaths of people who recovered from infections would contribute to herd immunity and stop the virus from spreading further.

But now, COVID-19 has circled the globe and is sweeping rapidly through tropical regions, and billions of people remain susceptible to the virus. It's likely the disease will be here with us year-round and for years to come, says Albert Ko, an epidemiologist at Yale and co-chair of the Reopen Connecticut Advisory Group.

"This virus may become just another endemic virus in our communities, and this virus may never go away," said Michael Ryan, director of WHO's health emergencies program on May 13.

To call a virus "endemic" means that it has a constant presence in a specific location, explains Ngozi Erondu, an epidemiologist and research fellow at Chatham House.

So why is this virus more difficult to combat than SARS? Why aren't the strategies that stamped out SARS working as well?

There's a key difference between the two coronaviruses, and it has to do with a critical factor for control: the period of time when infected people are most contagious, says Malik Peiris, a virologist at Hong Kong University who has studied both viruses.

WHO Creates 'Confusion' About Asymptomatic Spread. Here's What We Know

With SARS, most people who became infected did not start spreading the virus until they were showing symptoms. That made it easier to come up with a way to stop transmission. "As soon as somebody had a fever and a cough, they were brought into medical care and tested, isolated, and the chains of transmission would be broken," Peiris says.

The novel coronavirus, however, can be transmitted by people who are infected but aren't showing overt symptoms. That makes it more difficult to contain. By the time people know they're sick, they may have already spread it to others, Peiris says.

That ability to keep infecting people is what a disease needs to survive. You can see that when you look at how other disease-causing viruses manage to stick around.

One example is the herpes virus, which can cause blisters or ulcers around the mouth or genitals. It has a "very clever" strategy, Peiris says. Once a person is infected, the herpes virus hides out in their bodies. "From time to time, it gets reactivated and causes a milder disease that allows it to transmit to other people," Peiris says, so one person can keep transmitting the virus throughout their life. And there's currently no cure.

Other viruses rely on animals to keep alive — primates and bats, for Ebola. "It circulates in animals and spills over [to humans] intermittently," Ko says. When the virus comes into contact with people, it can spread quickly and is potentially deadly. A new Ebola outbreak, believed to have originated from animals, was announced June 1 in western Democratic Republic of Congo, which has experienced three previous outbreaks in the past six years.

A milder (although still potentially fatal) disease like flu has yet another strategy. Most people who catch the flu virus get over it and become immune to the strains that infected them.

"As the population immunity builds up, [the virus] undergoes mutation," Peiris says. These constant changes allow it to dodge our built-up immune system defenses — and circumvent past vaccines we've thrown at it.

But the novel coronavirus might not have the staying power of some of these other endemic viruses. For one thing, it doesn't mutate as fast as flu. And it doesn't usually appear to hide out in the body after the initial infection, WHO specialists say.

But dreams of a large, immune population are a long way off. For the novel coronavirus, researchers estimate that at least 50% to 60% of the population must be immune to it to slow its spread. "We are nowhere near that anywhere," Peiris says. Even in hard-hit places like New York City, only 20% of the population has been exposed to the virus, according to estimates from health officials. And there are open questions about how long recovered people are protected from reinfection, Peiris says.

What's more, there are still many hurdles to clear for vaccine development, Erondu says. "We keep getting these very hopeful estimates," she says, "[but] we probably won't have a vaccine for another two years at the minimum."

Peiris says it's possible a vaccine may come sooner — "maybe by early next year" — but that timeline assumes that everything goes perfectly. "We have to realize that there has been no vaccine for coronaviruses in humans," he says.

Meanwhile, even though 7.3 million people worldwide have been infected with the coronavirus, there are still billions who are susceptible to infection.