Accessibility links
Kente Cloth: The History And The Congressional Controversy : Goats and Soda When a group of Democratic legislators donned kente cloth at the unveiling of legislation aimed at police brutality, critics weighed in. Here's a look at kente cloth — and the controversy.

Kente Cloth: From Royals To Graduation Ceremonies ... To Congress?

Kente Cloth: From Royals To Graduation Ceremonies ... To Congress? 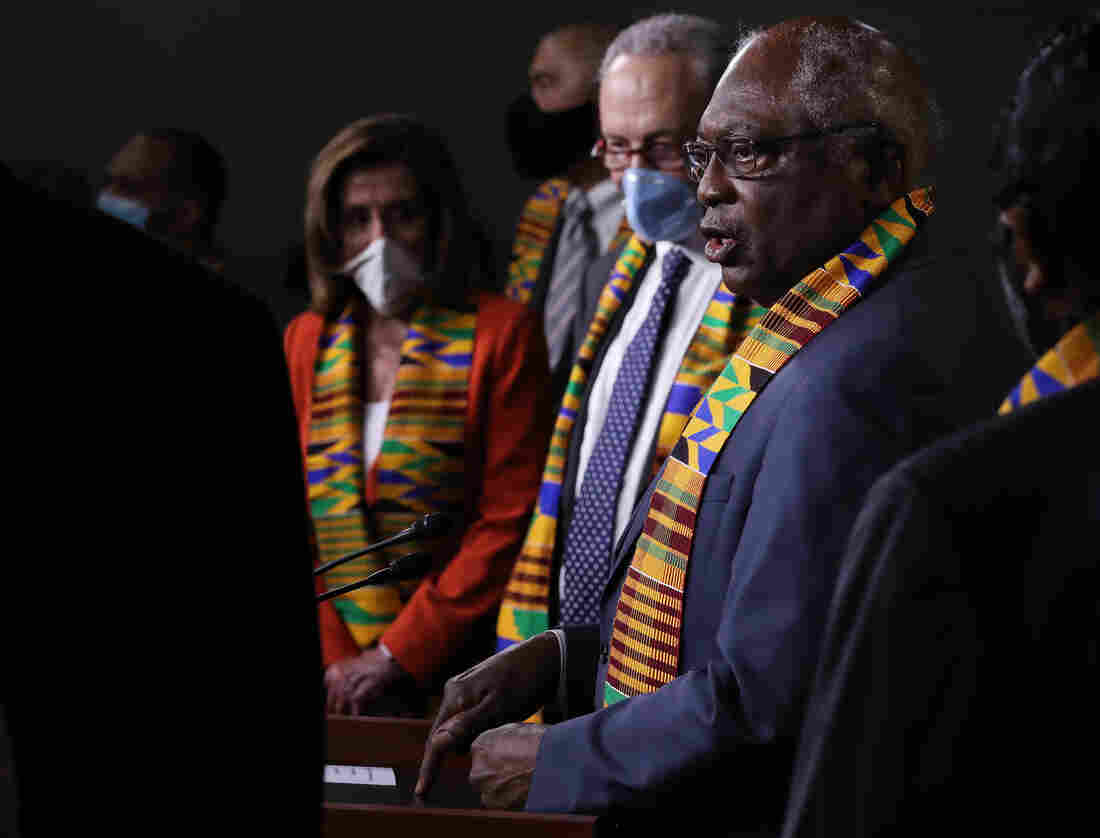 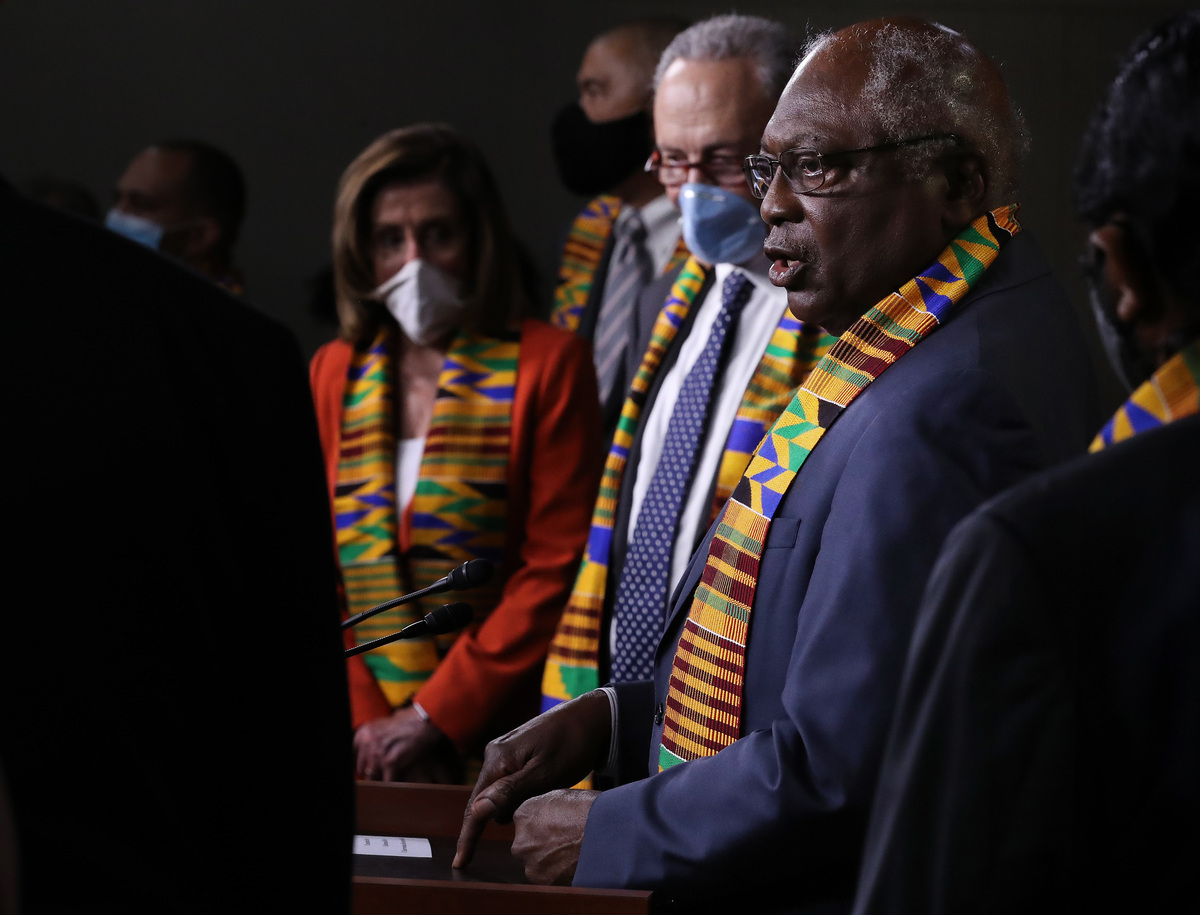 House Majority Whip James Clyburn (right) joins fellow Democrats from the House and Senate to propose new legislation to end excessive use of force by police.

On June 8, a small group of Democratic lawmakers donned Ghanaian kente cloth before kneeling on the floor of the U.S. Capitol for nearly nine minutes. The gesture was meant to show solidarity for George Floyd as they unveiled their proposed police reform legislation. But photographs of House Speaker Nancy Pelosi and Senate Minority Leader Chuck Schumer wrapped in the colorful woven strips, gifted to them by members of the Black Congressional Caucus, quickly sparked controversy online.

Doreen St. Félix of The New Yorker called the photo-op "outright mockery," while Robin Givhan of The Washington Post noted that it "muddied the current conversation about race" by creating a distraction from the real issue: the history of racist police violence in the United States.

We reached out to two experts to discuss some of the history and symbolism of kente cloth — and their reaction to the controversy. 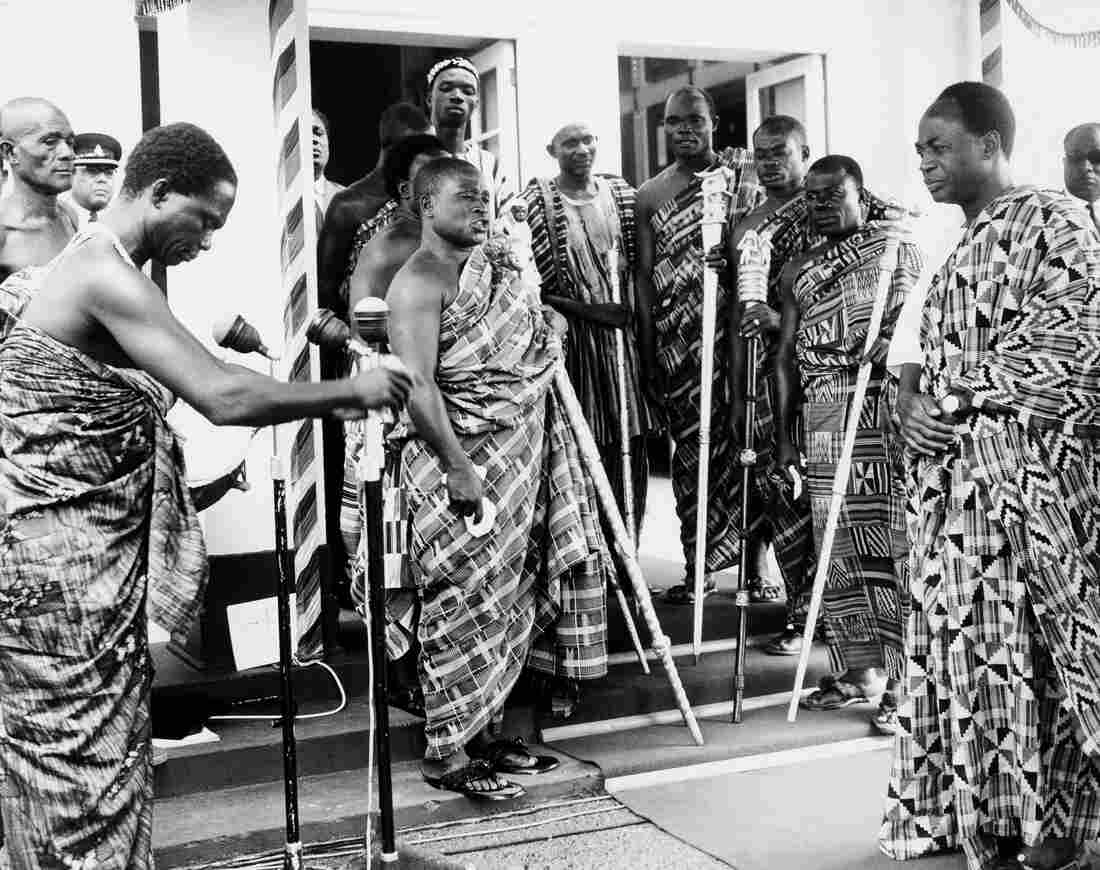 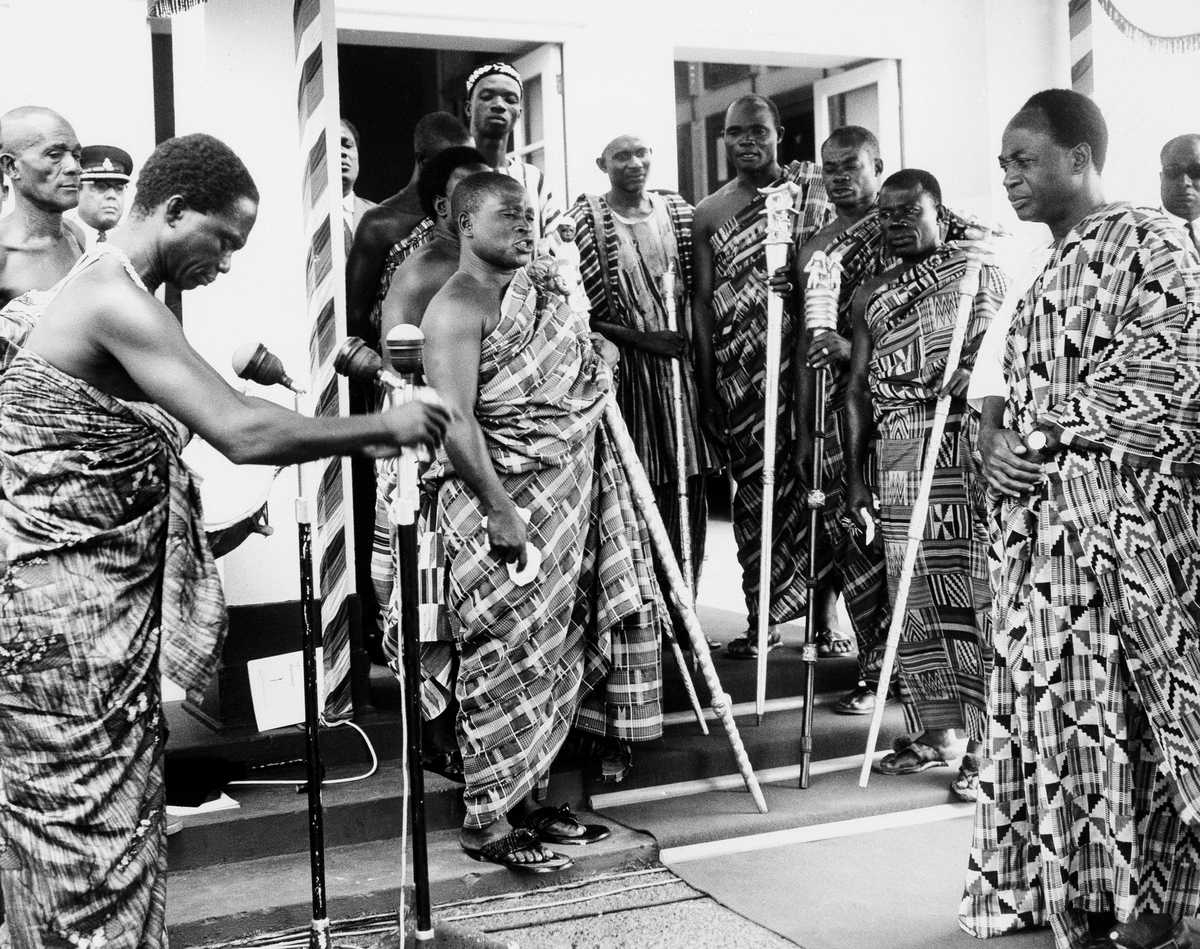 President Kwame Nkrumah, clad in kente cloth, prepars to enter the Ghana National Assembly on August 24, 1965, to deliver the opening address at the republic's second Parliament.

Kwasi Asare grew up weaving kente — his father created the kente piece commissioned by Kwame Nkrumah, Ghana's first president after declaring independence from Britain, to hang outside the United Nations General Assembly building in 1960. The younger Asare made a replacement for the original piece in 1995, which still hangs at the U.N. in New York City.

Diana NDiaye is a senior curator and cultural heritage specialist at the Smithsonian Center for Folklife and Cultural Heritage, where she focuses on the intersection between African-American dress and identity.

Here, they discuss the background of kente cloth and its current cultural significance for the African diaspora.

According to NDiaye, the colorful patterned fabrics known as kente can be traced back to the Asante people of the Akan kingdom in what is now Ghana. The word "kente" actually translates to "handwoven cloth" in the Twi language of the Akan people.

Although the exact origins of kente are lost in time, Asare likes to tell the story that long ago, two hunters encountered a spider weaving its web in the forest and were inspired to recreate the patterns.

"In early trade routes, Ghanian royalty would commission special cloths with particular [symbolic] patterns that were connected to proverbs, and both the pattern and color might be associated with a particular lineage," says NDiaye. "It was said the weavers would unravel silk trade cloth from China and re-weave it into kente patterns."

The strips can be single or double woven — two layers of cloth allow for richer colors and more intricate designs.

Asare says the Ewe people as well as the Asante have long made kente — with some differences. "The Asante do more abstract patterns that have the names of important people or places in Akan culture. The Ewe do more representational forms like houses," he explains. "So the strip that you saw Congress wear on their backs was an Asante design called Kyembre — this symbol represents knowledge, experience and service."

Garb Of Queens And Kings

In the past, members of local royalty would wear the cloth like a toga. Today, kente cloth is worn by community leaders and at special occasions like weddings and graduations.

"There are schools in Ghana [that] produce some of the shawls worn in the United States with graduation dates or very special occasions," says NDiaye. "I would not be surprised if there's going to be a line of kente weaving that has the words 'Black Lives Matter.' "

NDiaye says the style of wearing strips of kente around the shoulders, like those donned by U.S. legislators this week, most likely became commonplace when students at historically black colleges and universities — like Morehouse College in Atlanta — began wearing kente cloth at graduation.

"It went from being a Ghanaian symbol to being a symbol in the United States of asserting African and African-American identity," she says.

As kente became popular as a symbol of the African diaspora, there was more demand — and competition with the traditional Ghanaian weavers. NDiaye notes that printed (rather than woven) fabric manufactured in China flooded markets in the U.S. But weavers like Asare are leading a renaissance of the craft.

"It makes me very happy," he says. He travels through the United States with a small loom, teaching workshops about the technique of kente and how to differentiate between authentic products and printed versions.

At the end of each workshop, participants create their own kente bookmark.

NDiaye encourages anyone looking to buy kente — whether a strip, like those worn by Congress, or a full shawl — to find out about the weavers who made it.

And About The Kente Worn By U.S. Lawmakers...

NDiaye believes it was an honorable gesture of solidarity.

Asare says he didn't feel comfortable with the use of kente upon seeing the photographs, but now takes a more "relaxed" stance towards what the intentions of the members of Congress were in wearing the traditional handwoven cloths.

"I was a little disturbed at first, but then reflecting on it, I thought maybe it was a way for them to show some respect for African-Americans with all that is going on," he says. "I was initially a little irritated, but I don't have any feelings about it right now."