Accessibility links
World Bank: 1st Recession Caused Solely By Pandemic Is 'Deepest in Decades' : Goats and Soda The World Bank issues a report this week detailing the extent of the recession, the first caused solely by a pandemic. Its findings are sobering — but do offer a glimmer of hope. 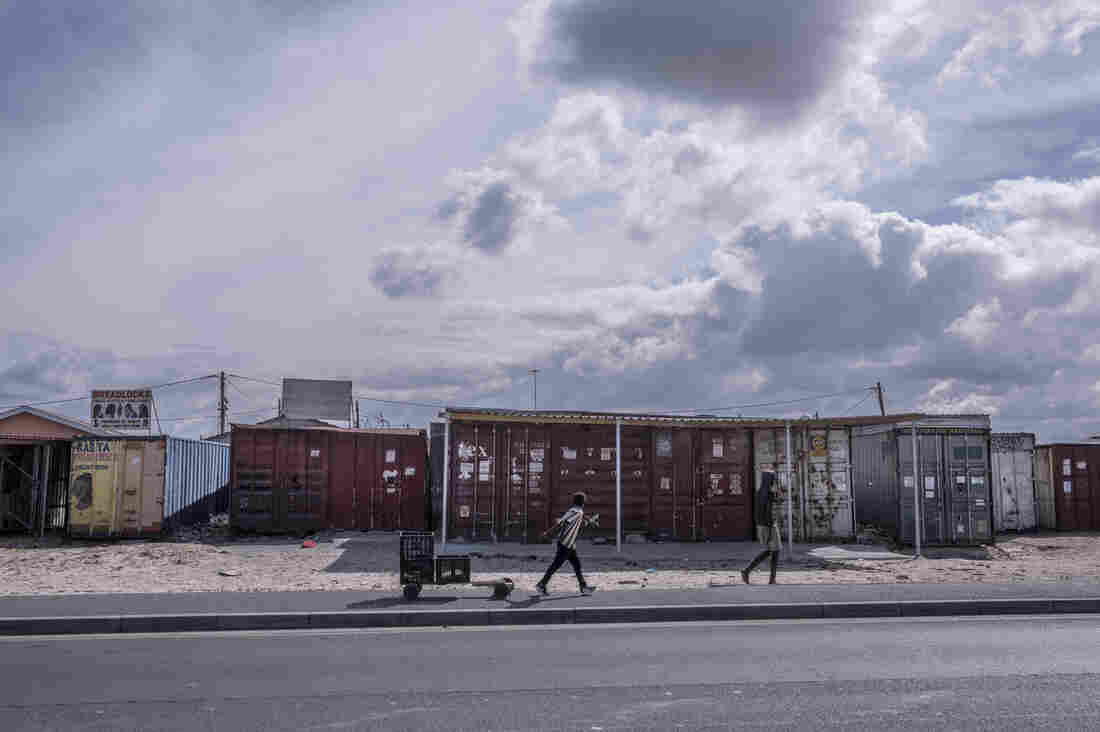 Boys walk past shuttered businesses in the township of Khayelitsha in Cape Town, South Africa, during the coronavirus lockdown. This recession is the first triggered solely by a pandemic, and low-income countries are particularly hard-hit. Tommy Trenchard for NPR hide caption 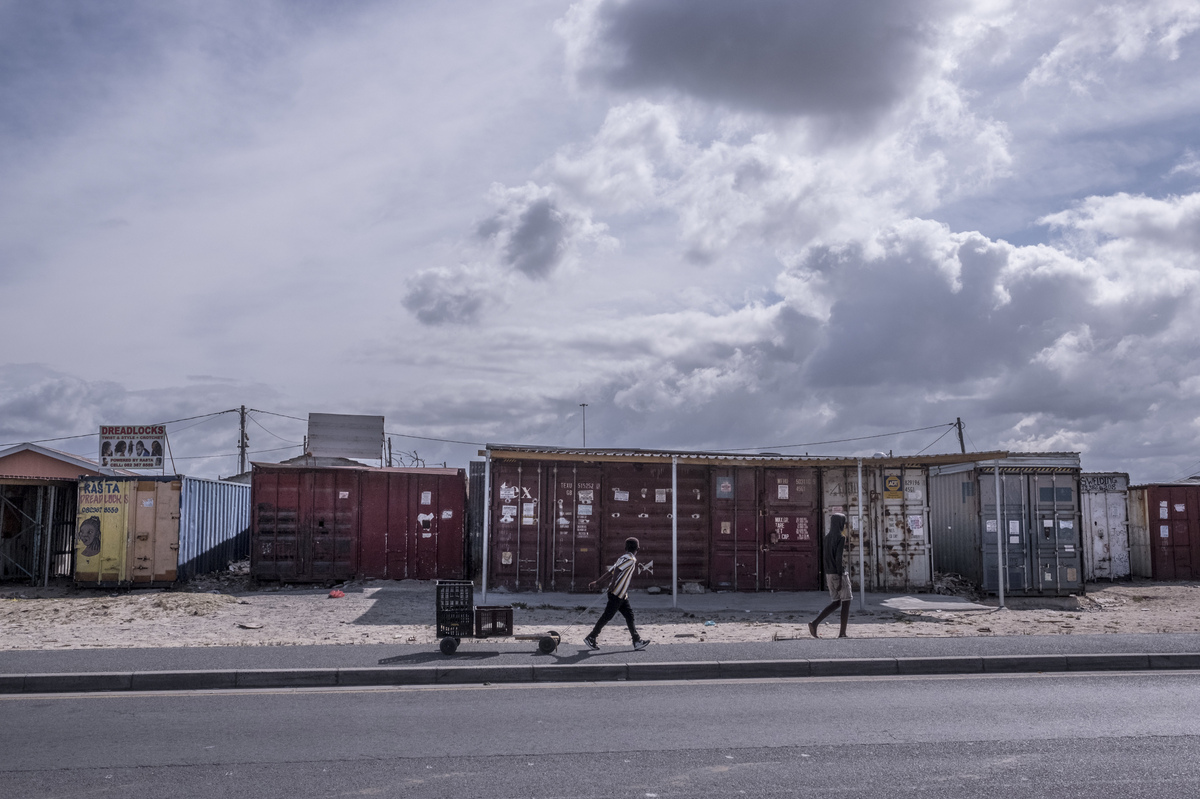 Boys walk past shuttered businesses in the township of Khayelitsha in Cape Town, South Africa, during the coronavirus lockdown. This recession is the first triggered solely by a pandemic, and low-income countries are particularly hard-hit.

A new World Bank report warns that the pandemic has plunged the global economy into a deep recession of historic proportions, and the recovery outlook is grim, particularly for developing countries.

The report, Global Economic Prospects, published Monday, compares the current economic crisis to the 13 other recessions that have hit the global economy since 1870. This recession is the first to be triggered solely by a pandemic, and it is enormous. Here are five major takeaways from the report — four pessimistic and one guardedly optimistic:

1. Historically, this is the worst global recession in several ways.

The overall global economy is expected to shrink 5.2% this year, according to the report. That puts us in the midst of the deepest recession since the end of World War II, the last time there was a comparable drop. And it's affecting more countries than any recession going back to 1870, even at the height of the Great Depression. For countries that the World Bank characterizes as "emerging market and developing economies," it is the first time they've experienced a recession as a group in at least 60 years. This goes to show "how deep, how wide and how synchronized this crisis is," says Ayhan Kose, director of the World Bank's Prospects Group. 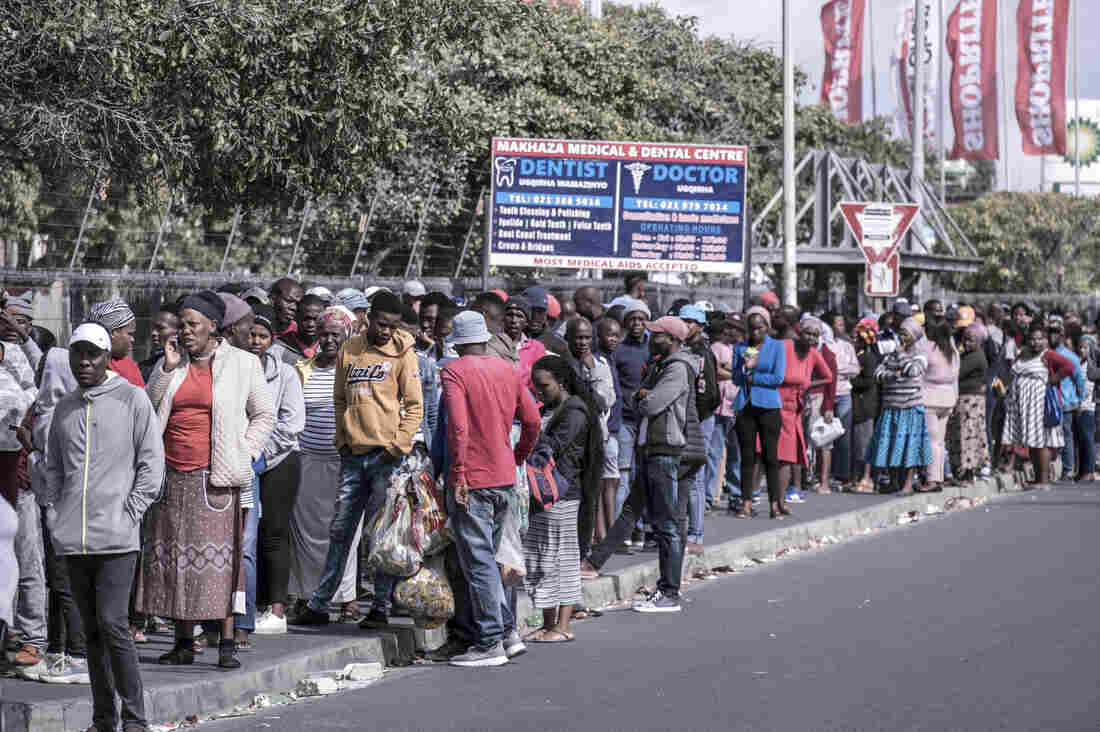 Shoppers line up for food outside a supermarket in the township of Khayelitsha in Cape Town during South Africa's lockdown. Tommy Trenchard for NPR hide caption

Economists are also concerned by how quickly the economic outlook has deteriorated compared with earlier recessions. In February, forecasters were still expecting economic growth this year. But in a matter of weeks, that view changed as countries suddenly locked down and economic activity ground to a halt.

By April, the International Monetary Fund said the global economy would "contract sharply" by 3%. Now, two months later, the forecast is 5.2% — 70% worse. These rapid changes could be partially due to how much more information is available to economists now than in the past, but the report says it's also a reflection of how much uncertainty remains about the pandemic — which means the economic fallout could still get much worse. In fact, another new report by the Organization for Economic Cooperation and Development is already projecting worse numbers: economic losses of 6% that will drop further to 7.6% if a second wave of coronavirus hits. OECD is calling it the worst recession in nearly a century.

All this is despite "unprecedented policy support" from governments and lending institutions that has "already far exceeded" those enacted during the 2008-09 financial crisis, the report says. Many countries have implemented large-scale social safety net programs and lowered interest rates. Financing and loans from institutions such as the IMF and World Bank have also been "exceptional and out of the ordinary," says Danny Leipziger, a professor of international business at George Washington University and former vice president of the World Bank.

"So far, what we have seen on the part of policymakers has been truly extraordinary," Kose says, "but this is a truly historical contraction, however you look at it." 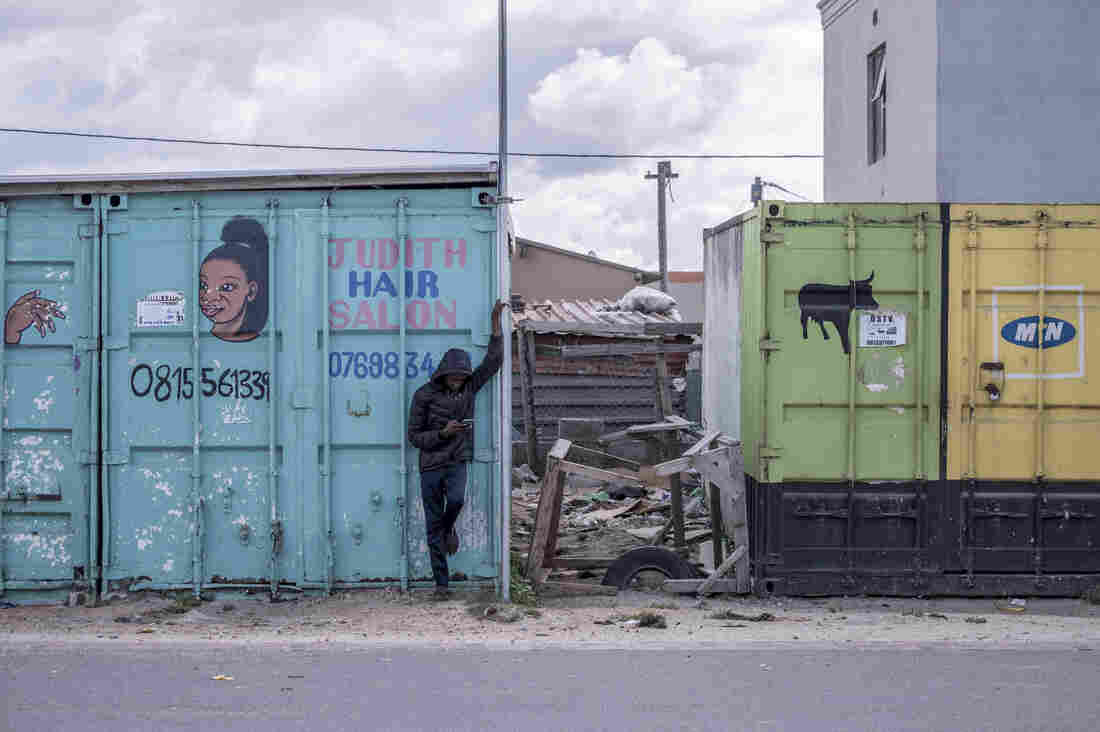 A boy checks his phone outside a shuttered hair salon in the township of Khayelitsha. Tommy Trenchard for NPR hide caption 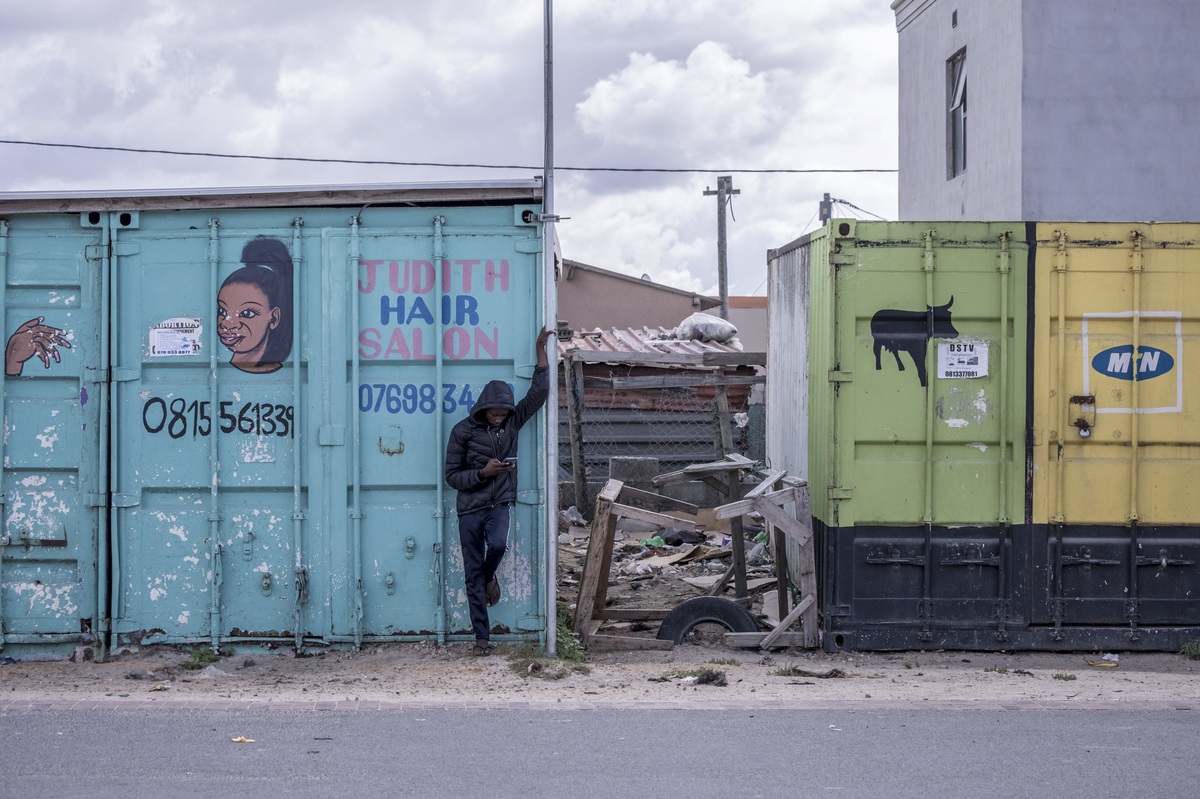 A boy checks his phone outside a shuttered hair salon in the township of Khayelitsha.

2. Tens of millions of people will be pushed back into poverty.

The World Bank forecasts that emerging market and developing economies will on average shrink by 2.5% this year, which doesn't seem as bad as the global average (5.2%) or high-income countries (7%). But that number masks huge regional and country-level differences, says David Evans, a senior fellow at the Center for Global Development. Latin America and the Caribbean, for example, are included in that category but are projected to contract by 7.2%.

"The other really important point is that in lower-income countries, you have far more people that are right around the poverty line — under it and just above it," Evans says. "So a much smaller shock in a low-income country can have a much bigger effect on putting people into poverty."

The World Bank anticipates up to 60 million people who were on their way out of poverty could be pushed below the extreme poverty line because of income losses due to the pandemic. It doesn't help that many developing countries entered 2020 already in a vulnerable position, George Washington University's Leipziger says: highly indebted to other countries and lending institutions, and overly reliant for income on exporting oil and metals, the prices of which have collapsed in the pandemic. This leaves even fewer economic resources for safety nets, such as cash support, small-business loans, food banks and unemployment insurance.

3. Because rich countries are being hit, poorer countries will suffer more in the long run.

Even before the pandemic, Leipziger says, some richer countries were moving away from global trade and cooperation, which hurt developing countries by reducing investments and cutting off markets for exporting oil, metals and other goods they provide. With this recession hitting rich countries just as hard, if not harder, the worry is that investments, trade and tourism in lower-income countries will decrease for longer than usual. It will make it even harder for lower-income countries to fight poverty and invest in things such as education, which build their economies' future potential to grow.

"When you have these types of deep recessions, they will leave long scars on the economy, and they will remain for an extended period of time," Kose says. 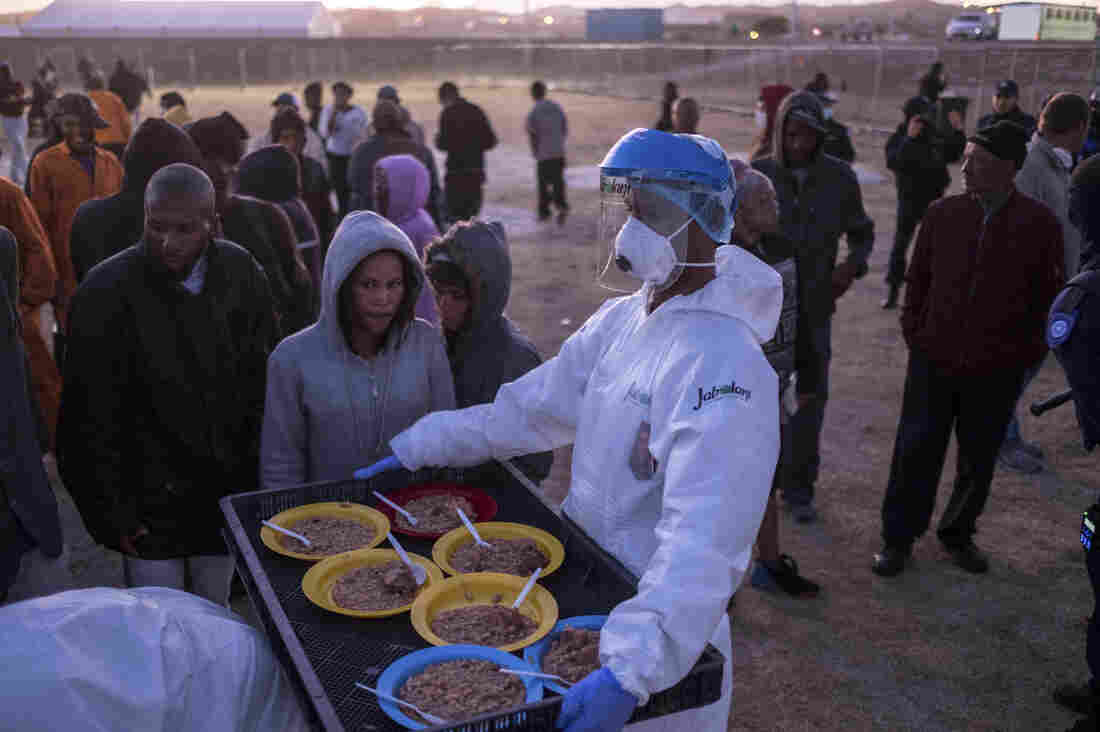 People receive food at a camp set up to house them during the coronavirus lockdown in Cape Town. Many are unhappy with the conditions of their confinement and worry that overcrowding poses a risk of catching the virus. Tommy Trenchard for NPR hide caption 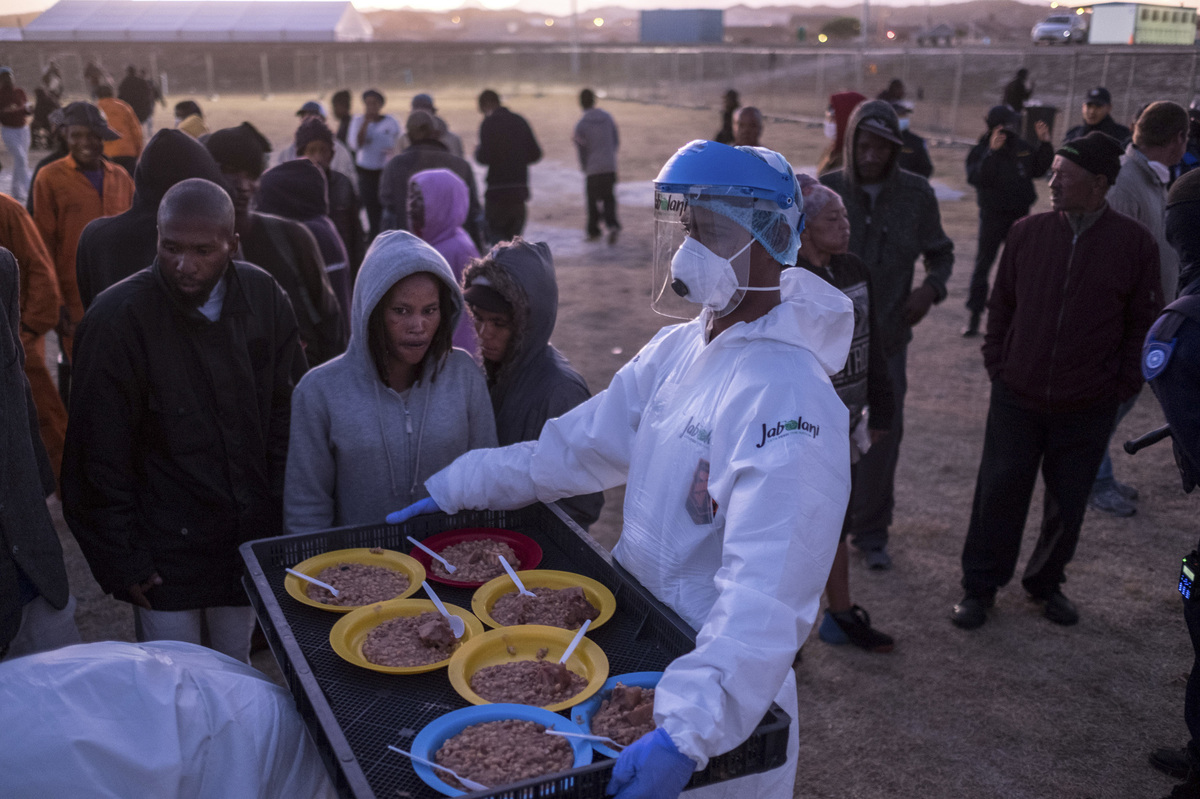 People receive food at a camp set up to house them during the coronavirus lockdown in Cape Town. Many are unhappy with the conditions of their confinement and worry that overcrowding poses a risk of catching the virus.

4. Even under the best-case scenario, the numbers are "devastating."

Let's assume all lockdown measures in advanced economies are lifted by July (and emerging markets and developing economies somewhat later, because many are experiencing a lag in outbreaks). Kose says this upside scenario would still result in the global economy shrinking by 4%, which is twice the pace of the 2009 global recession.

"The bottom line is: Even if you try to be optimistic, the numbers you see are quite devastating," Kose says.

He says the report should make it clear that however you slice it, "we have a very serious crisis on our hands," and policymakers should be ready to provide support, particularly to developing countries that do not have the capacity to control the pandemic as well as some advanced economies were able to do.

5. This crisis provides the opportunity to rebuild better.

"What this crisis shows us is that health is the No. 1 priority," Kose says. "If there are serious comprehensive [health] measures that come out of this episode, maybe this crisis will not be wasted."

Hand-washing stations, for example, have become more widely available as a result of the pandemic.

Evans of the Center for Global Development says there are many opportunities to build back better: He says he's hopeful that because the pandemic has been so widespread, it will galvanize a wide range of countries to implement pandemic preparedness systems. Remedial education programs are being rolled out to help students catch up from school closures, but he says these can be folded into regular education systems to improve learning. And the social safety net programs that so many countries have set up can be extended or strengthened to address poverty and inequality.

Joanne Lu is a freelance journalist who covers global poverty and inequity. Her work has appeared in Humanosphere, The Guardian, Global Washington and War Is Boring. Follow her on Twitter: @joannelu