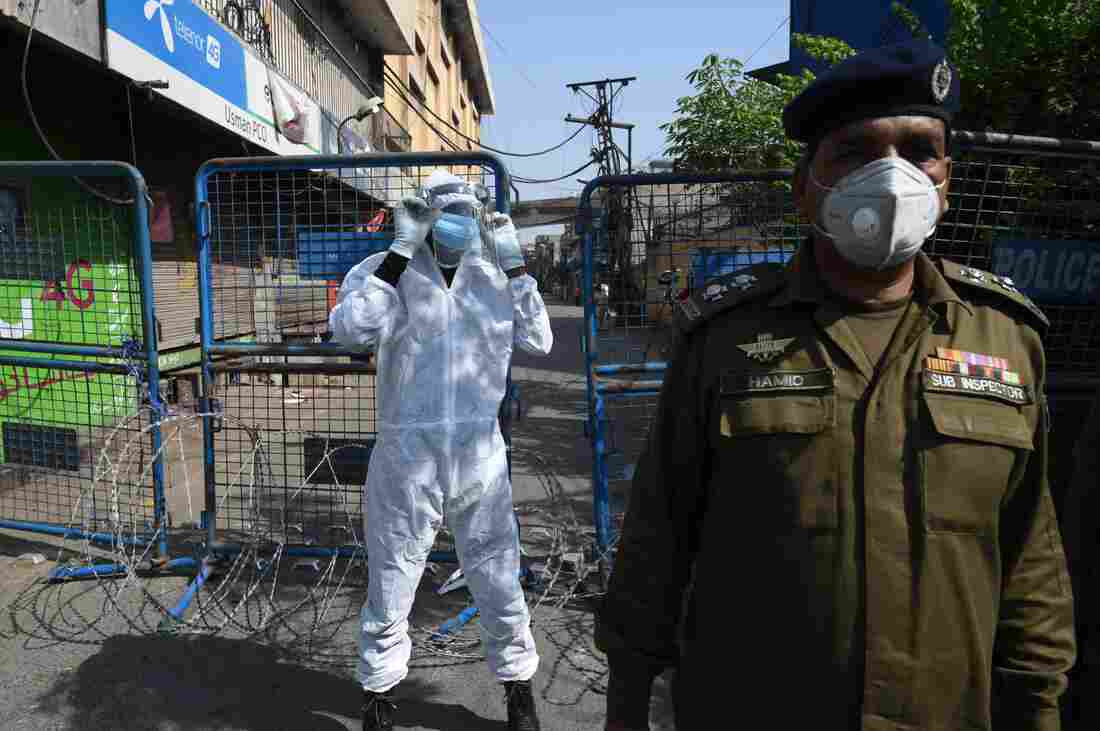 A policeman guards a street sealed by the authorities at a residential area in Lahore on June 17 as COVID-19 cases continue to rise. Arif Ali /AFP via Getty Images hide caption 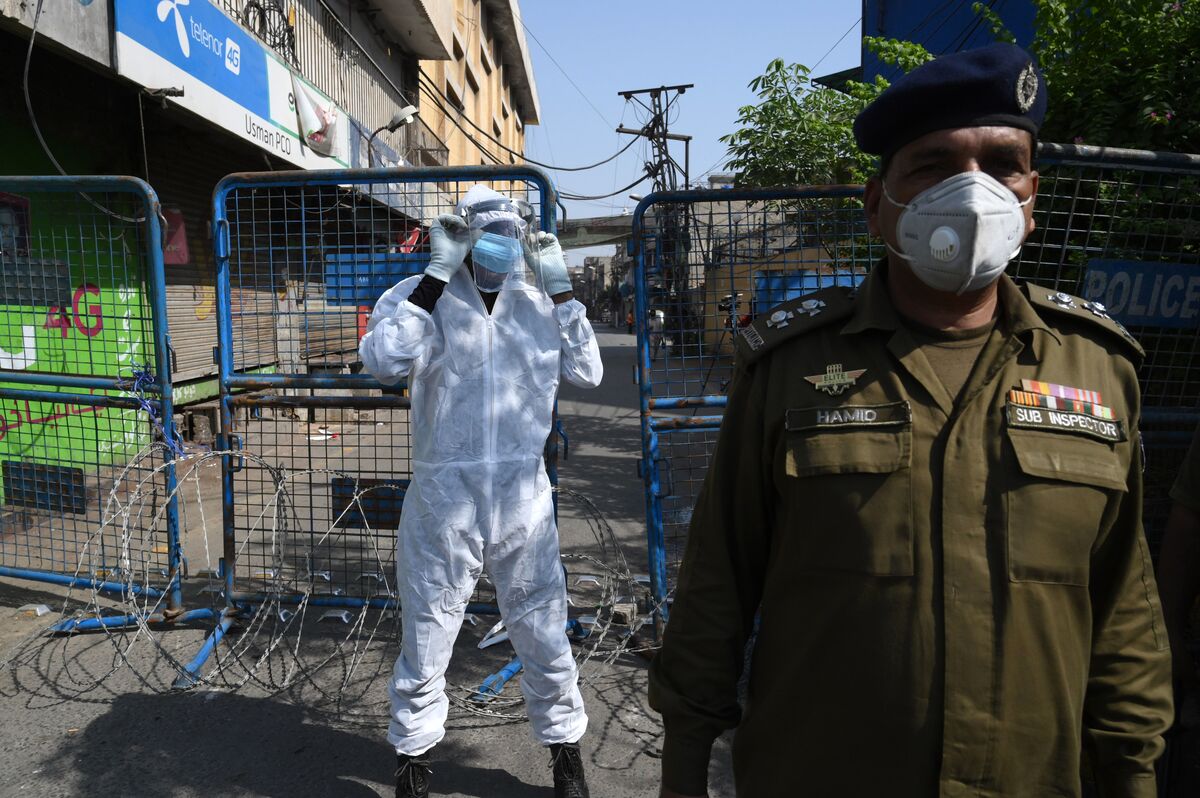 A policeman guards a street sealed by the authorities at a residential area in Lahore on June 17 as COVID-19 cases continue to rise.

Last week, Zain Tafneesh's family drove from hospital to hospital trying to find a bed for her 86-year-old grandfather. He had COVID-19 and was struggling to breathe. "We were helpless, we were begging," Tafneesh says. "Imagine that old man was in the car crying for oxygen, and the hospitals were showing no mercy."

Finally, Tafneesh's uncle called a powerful friend in the army, who got her grandfather into a public hospital near the Pakistani capital Islamabad. Tafneesh said that hospital had initially turned him away, claiming they had no space. The bed provided had likely been reserved for health workers who contract the virus.

The current surge of COVID-19 cases – which came after the government lifted its weeks-long lockdown at the end of May — is roiling the country. Pakistan now has one of the highest numbers of daily new cases in the world: 5,358 on Thursday, June 18. The total case count is 160,118 – and expected to reach more than a million by the end of July.

And after weeks of assurances by officials that the situation was mainly under control, a leaked letter from the World Health Organization suggested that the health system in the country's most populous province, the Punjab, risked collapse if the government did not take urgent action. But authorities say the health system is not under pressure and that the issue is patients are flocking to particular hospitals, overwhelming those institutions.

Nonetheless, the WHO letter echoes what a dozen doctors in public hospitals across Pakistan told NPR: that even with the present case count their COVID-19 wards are full or nearly full. They're scrambling to procure equipment and medicine even as they themselves are falling ill and dying in disproportionate numbers. They say they're also being attacked by angry relatives as frustration mounts over the lack of facilities.

"It's very desperate situation." Fakhar says. "The government hospitals are swamped, and the capacity they have, it's not enough." She says her hospital has 63 COVID-19 beds but serves an area containing millions of people.

The COVID-19 response in Pakistan, the world's fifth most populous country, was always going to be difficult: a continued lockdown risked economic ruin, mass impoverishment and even unrest.

But critics say Pakistan's pandemic woes reflect a government acting rashly in some cases. "There are aspects of the response that beggar belief," says Mosharraf Zaidi, director of Tabadlab, a government policy thinktank and a columnist. "One of the primary objectives of public policy needed to be to prevent the collapse of the public health system" – and that had not happened – because, he says, of "the gut feeling of the prime minister."

The prime minister, Imran Khan, has argued against lockdowns, saying they harshly impact Pakistan's millions of poor, whose incomes dried up when the country largely shuttered from mid-March to the end of May. That's when the overwhelmingly Muslim country opened up as citizens prepared to celebrate Eid al-Fitr, a four-day public holiday.

A Leaked Letter From WHO

The concerns expressed by Fakhar and others were echoed in the World Health Organization letter dated June 7, which was leaked to the media. It asked Dr. Yasmin Rashid, the health minister of the Punjab, Pakistan's most populous province with over 100 million residents, to implement temporary, localized lockdowns to "maintain essential health service delivery, mitigating the risk of system collapse."

The WHO letter noted that 24 percent of Pakistanis who had been tested for COVID-19 were positive. It said the positive rate should be no higher than 5 percent, which would suggest disease transmission was under control. It said Pakistan's ability to identify, test, isolate and care for COVID-19 patients was "weak."

(Neither the federal government nor WHO officials responded to multiple interview requests.)

Nine days after the leaked letter caused newspaper headlines, the government said it was imposing lockdowns in parts of 20 cities where the disease is rapidly spreading.

Still, the health minister, Rashid, who belongs to Khan's political party, blamed citizens for spreading the disease. "This is a nation [of people] who do not listen," Rashid said in an interview on Monday. "I think nobody is as illiterate as we are." Rashid apologized for the comments after she was widely criticized.

As for now, one doctor at a government-run hospital says they're running short of medicine and oxygen for their patients. Dr. Ammara Khaled, of the Mayo Hospital in Pakistan's second-largest city, Lahore, says "ventilators are out of the question."

At the Mayo Hospital, "they're only given to people who have some link to some senior official or some political person," Khaled said. Regular patients get access only if there are spare ventilators.

But last week, there were none. So Khaled told patients in the COVID-19 ward that if they needed a ventilator, "you can be referred to a private hospital if you can afford it." Most Pakistanis cannot. She says it left her as a doctor with one terrible option: "you know, just observe the patient, and – see them dying."

Government officials have played down the shortages, like Rashid, the Punjab health minister. "I keep telling people that beds and ventilators are available everywhere," she said in a press conference on June 10,, blaming families for rushing to the same hospitals.

That was echoed by the head of the Corona Experts Advisory Group, which advises the government. Dr. Mahmood Shaukat told NPR that according to figures provided to him by the government, "neither there is a shortage of beds, not in shortage of ventilators, and there's no problem with the supply of oxygen. The issue is that people want to go to a specific facility" where beds may not be available. Still, he cautioned, if the cases of COVID-19 continued to "progress at the rate that we are progressing now, it will become a serious issue by the end of June or the first or second week of July."

The Threat To Health-Care Workers

Doctors say that sort of talk puts them in danger.

"When the public comes into a government hospital in their head, the idea is that everything's going to be available," says Fakhar of the Khyber Teaching Hospital. So you can imagine all that frustration. They take it out on doctors, sadly. And I think the root cause is because they're given false hopes."

There have been at least 20 attacks on medical workers in Fakhar's province of Khyber Pakhtunkhwa, according to the local branch of the Young Doctor's Association, which monitors the violence. They include three shooting incidents — one because hospital administration refused to hand the body of a deceased patient to his extended family because they were waiting for the result of a COVID-19 test to come back first.

In Fakhar's hospital, men rioted after one of their group was refused a COVID-19 test.

Health workers say they're also being attacked because of conspiracy theories widely being spread on social media and Whatsapp, including one by a prominent cleric, Kawkab Noorani Okarvi, who accuses doctors of killing patients and falsely claiming they died of COVID-19.

If the situation worsens, doctors fear the attacks will increase. More broadly, they fear the health system will collapse if the case numbers continue to surge.

"People will die on the roads. People will die in their homes. We will die," says Dr. Sorath Sindhu, who works in the COVID-19 ward in the government-run Civil Hospital in the southern city of Hyderabad. "Nobody will be spared by this thing," she says.