Accessibility links
Men Dominate COVID-19 Task Forces. Women Are Demanding Representation : Goats and Soda The pandemic is by some measures taking a greater toll on women. Yet women are underrepresented in expert groups that decide how to control the coronavirus and where funds should go. 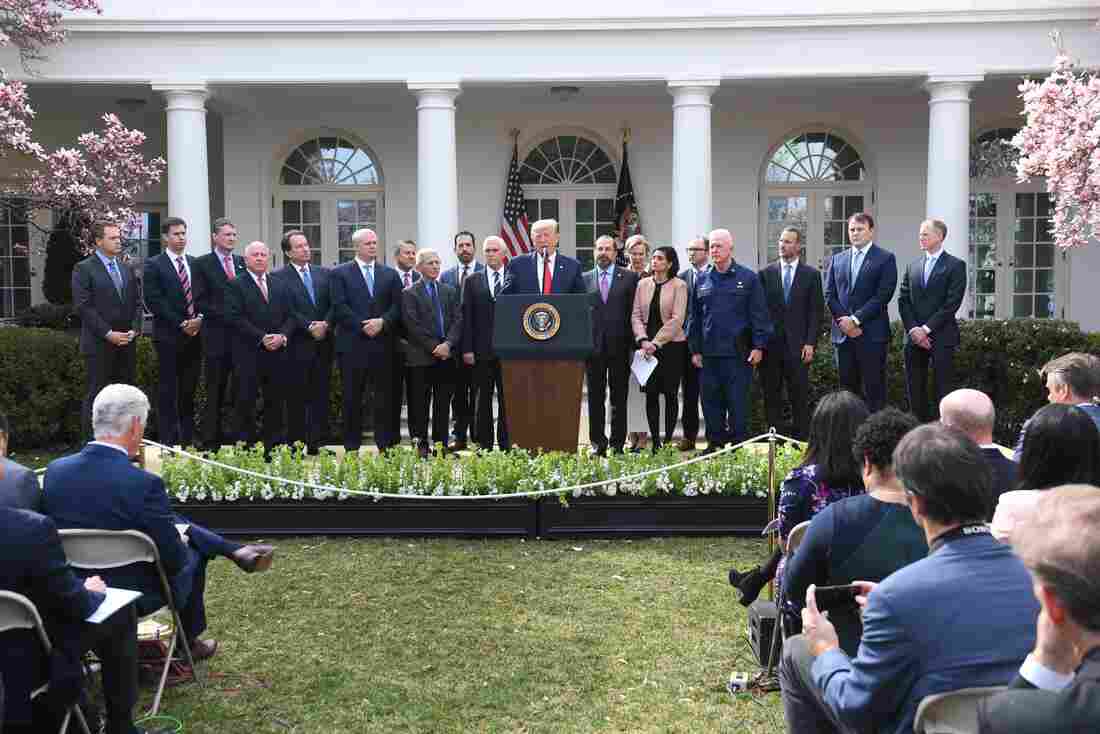 Surrounded by some members of the White House Coronavirus Task Force, President Trump speaks at a press conference on COVID-19 in March in the Rose Garden. Of the 27 task force members, two are women, standing to Trump's left: Dr. Deborah Birx and Seema Verma (holding the sheaf of papers). Saul Loeb/AFP via Getty Images hide caption 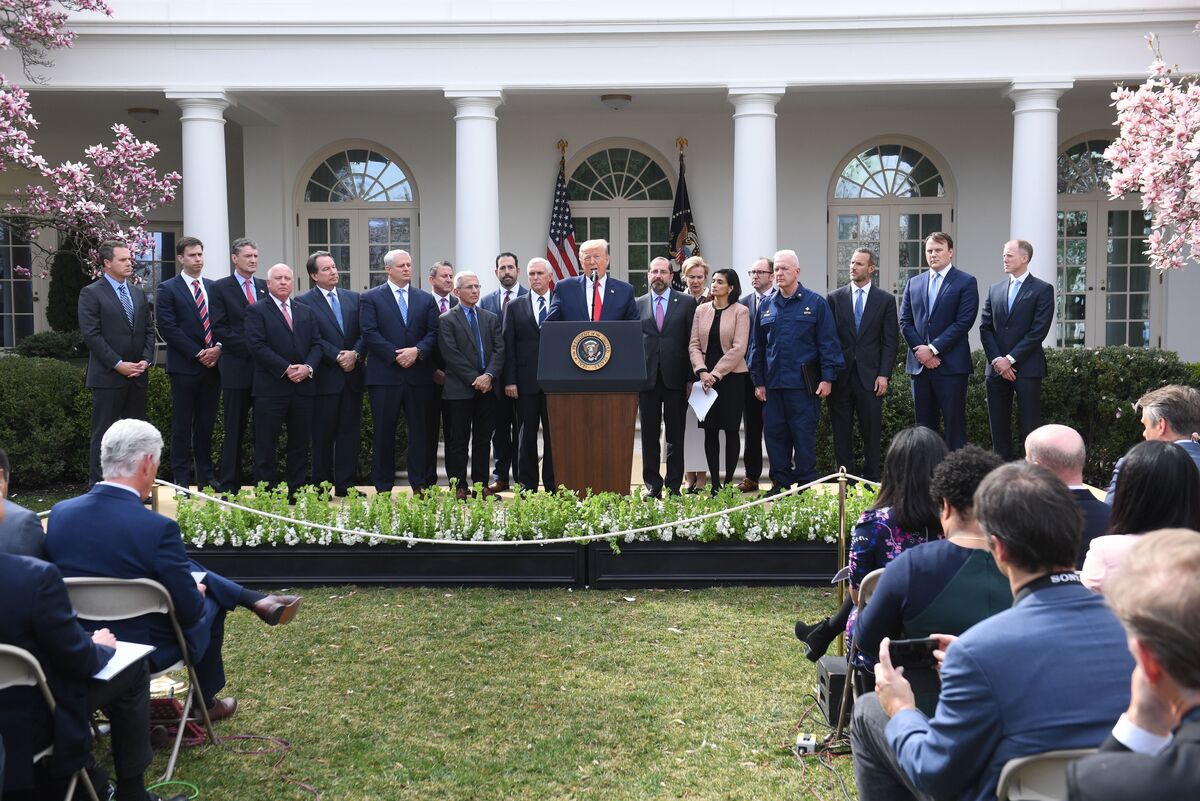 Surrounded by some members of the White House Coronavirus Task Force, President Trump speaks at a press conference on COVID-19 in March in the Rose Garden. Of the 27 task force members, two are women, standing to Trump's left: Dr. Deborah Birx and Seema Verma (holding the sheaf of papers).

There are 27 members of the White House Coronavirus Task Force.

Only two are women: Dr. Deborah Birx and Seema Verma, administrator of the Centers for Medicare & Medicaid Services.

It's a gender breakdown that's echoed around the world. For example, 10 of the 31 members and advisers of the World Health Organization's Emergency Committee on COVID-19 are women, and of the 25 members of the WHO-China joint mission on COVID-19, 20% are women.

Although research has shown that men appear more likely to suffer more severely or die from COVID-19 than women, the pandemic is, by some measures, taking a greater toll on women.

Health care workers are at greater risk of infection than the general population, and 70% of the world's health workforce, according to the WHO, are women.

Countries are reporting higher numbers of reports of domestic violence as stay-at-home orders have confined women to tight quarters with abusive family members. And widespread shutdowns have disrupted women's access to maternal health services. A study in The Lancet estimates, in its worst-case scenario, that nearly 60,000 additional women could die of maternal health complications over a six-month time period as a result of COVID-19.

In response to this lack of voice, women activists around the world have pushed for better representation — with mixed results.

In March, Roopa Dhatt, a physician who is the co-founder and executive director of Women in Global Health, held a dozen one-on-one meetings with representatives from U.N. agencies and governments, encouraging them to include more women on their coronavirus task forces.

Dhatt says most of the people she spoke to told her that "now is not the time" for such discussions. In a conversation with a senior member of a "global agency that has been leading" on the COVID-19 response, she says she was told: "We're in a wartime, and we have to prioritize what's the most urgent."

Since then, Dhatt has seen signs of progress in the effort to bring women — and women's issues — to the table.

But there are still obstacles. "I don't think we've had too many honest conversations as to why women are left out in the first place. It's based on this fundamental lack of confidence in what they can bring to the table," says Loyce Pace, president and the executive director of Global Health Council, a coalition of academic institutions, think tanks and groups in the global health sector. "To exclude someone — that's a choice."

Here are some of the issues that women are fighting for:

Data based on gender

Problem: Some countries are not reporting the gender of confirmed COVID-19 cases, hospitalizations, intensive care unit admissions and deaths. According to Global Health 50/50, a research project of the University College London's Centre for Gender and Global Health, out of 106 countries surveyed, 23 do not have sex-disaggregated data. This includes countries with some of the largest COVID-19 case counts in the world: Russia, Turkey and the United Arab Emirates.

The lack of gender-specific data matters, experts say. Dhatt says she believes that women face more situations that put them at risk of the disease. At home, they are more likely to be the ones caring for an ailing family member, exposing themselves to the virus, Dhatt says. And the risks that face all health workers fall disproportionately on women because of their high numbers in that field, she says: long hours, high stress and insufficient or inadequate personal protective equipment. Amina Jama, who leads Somalia's chapter for Women In Global Health, says that in her country, some health care workers have had to use the niqab, the Islamic covering that shields the face, as a face mask.

According to the Centers for Disease Control and Prevention, it is critical for PPE to fit properly to ensure protection, from the gown to gloves to goggles. But women don't always have access to PPE geared for women's frames. In fact, a 2016 survey of 3,086 women in a range of industries, conducted by the Institute of Mechanical Engineers Support Network and other groups, found that just 29% of respondents reported that the PPE they wear is designed for women.

If data establish higher infection rates among female health workers than among male health workers, then "the data can be used to devise policies and strategies that are gender-sensitive," says Jama — for example, a government requirement that they be given properly fitting PPE.

The solution (in progress): Somalia is a partial success story. The initial COVID-19 data were not categorized by gender and age, but after four weeks of advocating for this breakdown, Jama and the Somalia chapter of Women in Global Health, along with other local nonprofits and advocates, say the government has begun releasing this information.

One initial finding is that the average age of women infected is younger than men. But the data have not yet been conclusive because the information is too preliminary, Jama says. As a result, the government has not made any changes to its policies, but Jama is continuing to monitor the data.

Women at the table

The problem: Women, because of their vast presence in health care, have crucial knowledge that can help shape COVID-19 prevention — but decision-makers are not consistently tapping into their expertise, Jama says.

In Pakistan, Women Find Freedom In Quarantine Through Bikes

She shares the story of a nurse she met at a weekly Facebook chat for Somalian women health care workers, who make up an estimated 80% of the health workforce, according to the Ministry of Health.

The nurse said she was told to encourage people in the low-income community where she worked to wash hands frequently. "And she felt guilty telling [that to] people who do not have water to drink," Jama says.

After health authorities set up hand-washing stations in the area, people came — not to wash up but to fetch water for household use.

If the nurse had been invited to share her insights with members of the country's COVID-19 task force, Jama says, "she would have told them that they need to provide water to drink first and then bring the hand-washing campaign."

The solution (in progress): Global health advocates are pressing for female representation in COVID-19 task forces. Dhatt and her group finally got their breakthrough in May at the World Health Assembly, the decision-making body of the World Health Organization. Some of the policies that Dhatt had been negotiating with member states to include in their own COVID-19 strategies made it into the World Health Assembly resolution: language calling for more involvement of women in pandemic decision-making as well as for COVID-19 plans to respond to the needs of all genders.

Getting words into a document may not sound like a big deal but is an important first step, Dhatt says. "These resolutions ensure from a global perspective that governments are prioritizing gender. Second thing is, these documents become useful for how funding is allocated. Without that language in the resolution, it's hard to hold governments to account."

The problem: As some governments develop policies to address the pandemic, services to women are severely affected. In May, the U.S. sent a letter to the United Nations, requesting that the agency remove references to "sexual and reproductive health" — including abortion services — in its COVID-19 plan, saying that the "U.N. should not intimidate or coerce Member States that are committed to the right to life." Women's health groups expressed concern, saying these services are an essential part of health care in an emergency such as the pandemic.

"From the very beginning," says Lyric Thompson, senior director of policy and advocacy for the International Center for Research on Women, "there should have been an analytical and intentional process [among U.S. foreign policy makers] that asked, 'How do we make sure the policy choices that we make are not exacerbating issues for women?' "

The solution (in progress): Create foreign policies that take women's well-being into account, Thompson says. In May, she and representatives from a coalition of more than 50 humanitarian and women's rights groups rolled out a vision for a U.S. "feminist foreign policy." They're calling for the creation of a "feminist inspector general" at the White House, among other actions, to ensure that international programs — from trade initiatives to humanitarian aid — are designed for women and protect women from the get-go in any future crisis.

Feminist foreign policies have been put in place in countries such as Sweden, France, Canada and Mexico.

Karina Gould, head of Canada's international development ministry and its Feminist International Assistance Policy, says she hasn't had any trouble convincing Canadian leaders to put gender on the global COVID-19 agenda. "I'm leading that. I can push that. That's my decision."

Since the pandemic began, "a large part of what I've been trying to do with Canada's international assistance is to stay the course on sexual and reproductive rights work," she says.

On Monday, the agency announced it would give $93.7 million to six global sexual health and reproductive rights projects to ensure access to safe abortion and contraception during the pandemic. The funding will benefit organizations such as Ipas, which provides contraception to Rohingya refugee women, and the U.N's family planning agency, the U.N. Population Fund, in countries such as Indonesia, South Africa and Tanzania.

Thompson says she hopes that the U.S. can adopt a similar gender-focused approach to foreign policy. "The key points we are advocating for transcend partisan politics and would benefit any administration," she says.

But Pace of the Global Health Council warns that the challenge with any new effort to bring women into all levels of COVID-19 planning — or any policy for that matter — is that "it doesn't solve all problems. Where the rubber meets the road is how that policy is executed."