Accessibility links
Pandemic Causes China To Rethink Breeding Wild Animals For Food : Goats and Soda The idea is to reduce the risk of spread of viruses through animal-human contact. Bamboo rat breeders are devastated by the loss of income. And critics say the ban has too many loopholes. 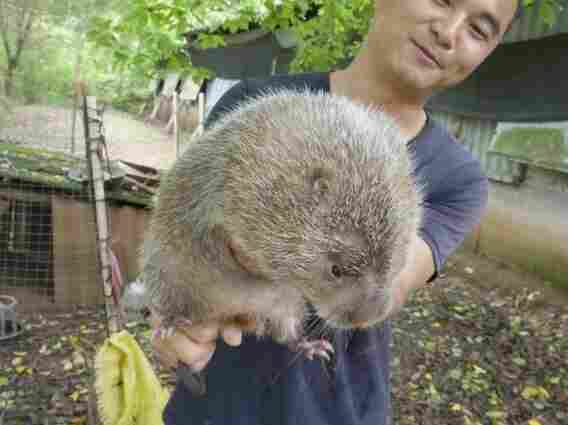 Liu Ping, a breeder of bamboo rats. He had to cull his rats when the Chinese government banned consumption of various wild animals as a way to potentially curb spread of viruses from animals to humans. Liu Ping hide caption 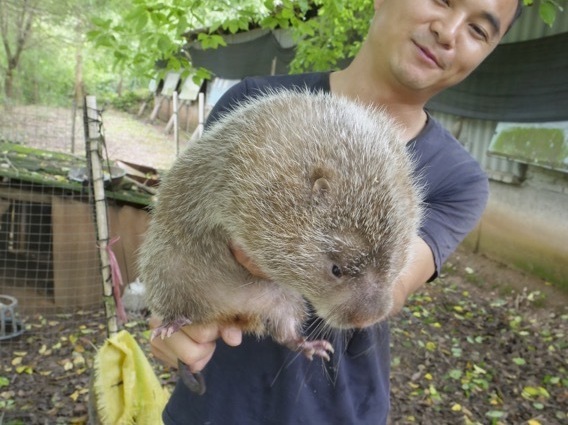 Liu Ping, a breeder of bamboo rats. He had to cull his rats when the Chinese government banned consumption of various wild animals as a way to potentially curb spread of viruses from animals to humans.

This year was supposed to be a good year for selling bamboo rats to eat. Prices had been rising steadily as had their popularity as a delicacy when grilled.

Then the coronavirus hit.

"People nowadays are always talking about poverty alleviation. But now, I'm close to being in extreme poverty," said Liu Ping, a breeder of bamboo rats — plump rodents known for their sharp, bamboo-gnawing incisors and ample flesh.

Days after a mysterious pneumonia-like illness in Wuhan was linked to a local wet market known for selling exotic animals, authorities suspended the transportation and sales of terrestrial wild animals, including bamboo rats and badgers.

Chinese researchers have since theorized that wildlife species such as bamboo rats, pangolins and civet cats may have been intermediate hosts for the novel coronavirus before it infected humans.

On paper, China moved fast to close off wild animal consumption. On February 24, China's national legislature suspended illegal wildlife trade to "uproot the pernicious habit of eating wild animals." Cities such as Shenzhen rolled out their own, more far-reaching policies that also suspended the consumption of certain domesticated animals, notably dogs, a move animal activists have been lobbying for for years.

The general consensus is that the ban is a good step but needs to be made permanent – and to be more sweeping.

Since the early 2000s, rural development policies explicitly encouraged the breeding of captive animals such as rat snakes and pangolins, scaly mammals prized in traditional Chinese medicine. Local officials trumpeted the wildlife trade as a way to close the rural-urban divide and to meet ambitious national targets to alleviate poverty.

Bamboo rats have been particularly popular among breeders. The rats are a delicacy eaten in parts of southern China, popularized in part by internet celebrities like the Huanong brothers, whose earthy videos depicting them breeding and grilling the rats have attracted millions of views on social media. Since the coronavirus pandemic, the brothers have quietly pivoted toward videos featuring them grilling vegetables.

Liu, a bamboo rat breeder from a small Guangdong village, took notice of the government support for raising rats. Late last year, he took out 100,000 yuan ($14,150) in loans to expand his bamboo rat operations. Thanks to a local poverty alleviation program, his loan was interest-free for the first two years. 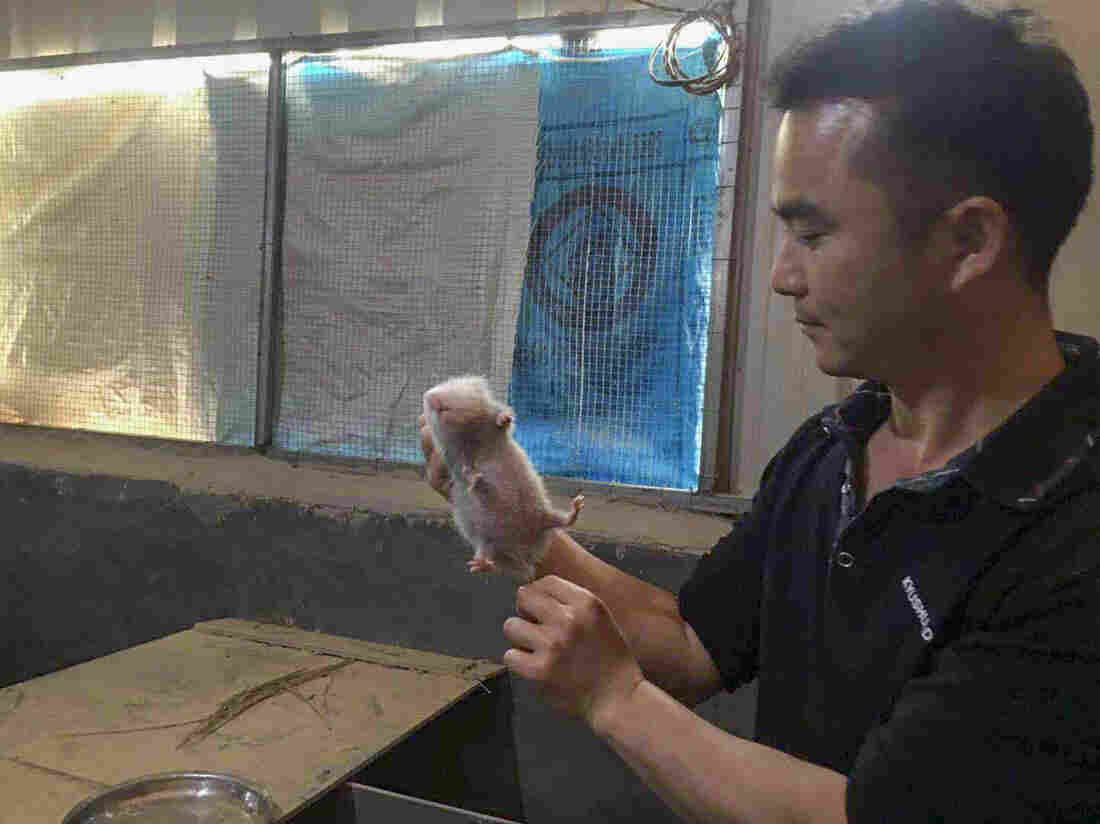 Bamboo rats are prized for their ample flesh. This year was looking to be a good year for rat breeders like Liu Ping — consumption of the grilled delicacy was increasingly popular and prices were going up — until the coronavirus struck. Liu Ping hide caption 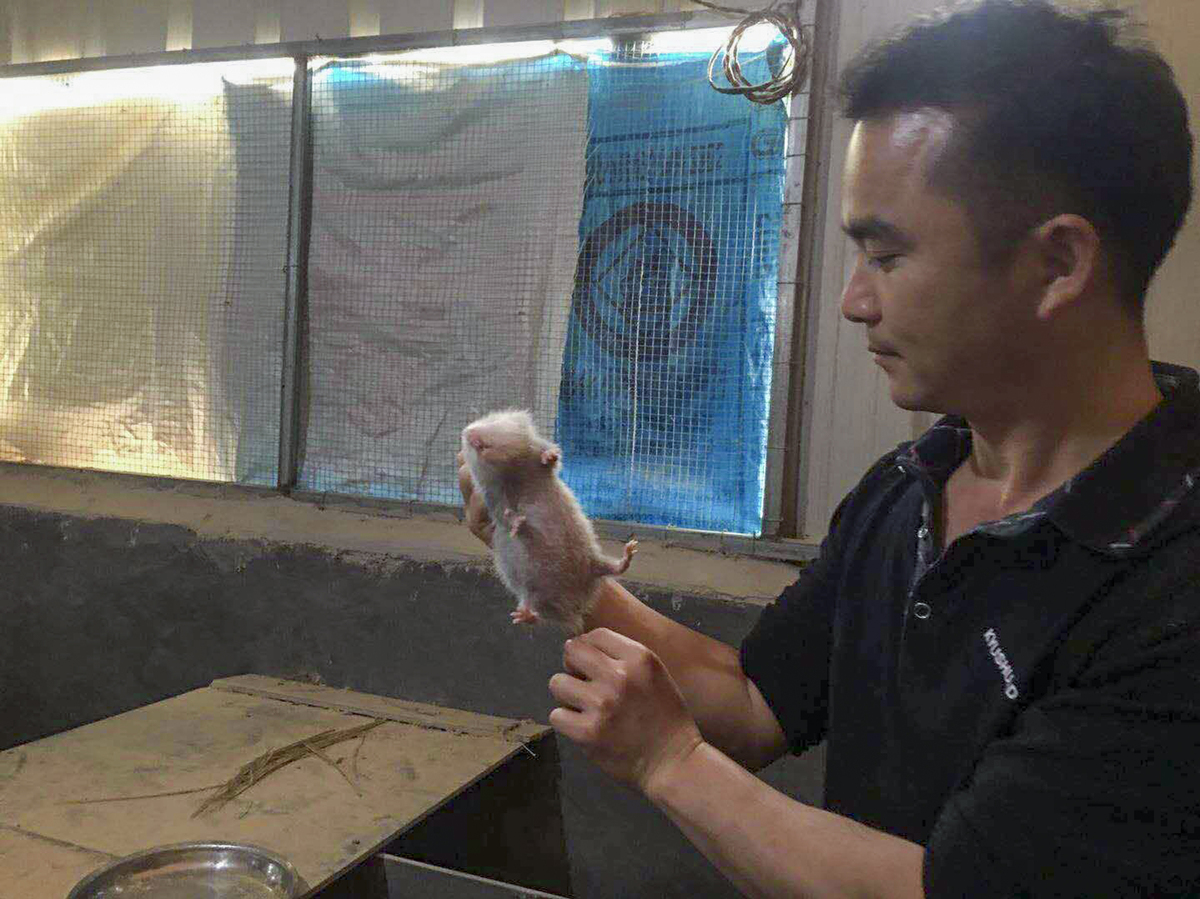 Bamboo rats are prized for their ample flesh. This year was looking to be a good year for rat breeders like Liu Ping — consumption of the grilled delicacy was increasingly popular and prices were going up — until the coronavirus struck.

But less than two months after his investment, the coronavirus pandemic struck. "I have not earned a penny since the Chinese New Year in January, but I have elderly parents and young children to feed," Liu said.

Liu is especially infuriated by the seemingly arbitrary designations of which species are banned while others are permitted for consumption.

For example, China's definition of what is a wild animal continues to change. Last month, the Ministry of Agriculture and Rural Affairs released an updated list of species permitted for breeding in captivity. Bamboo rats did not make the cut. China's top scientist, Zhong Nanshan, has said bamboo rats may be a vector for COVID-19.

They Call Him A Hero: Dr. Zhong Is The Public Face Of China's War Against Coronavirus

Seventeen traditional species such as chicken and rabbit as well as sixteen "special" species, including spotted deer and ostrich, did make it. The ministry decided that such animals would now be considered "livestock," meaning they can be commercially bred and traded.

"Where exactly you draw the line between 'wildlife' and what many perceive as domesticated species for consumption is a blurry one," said Leigh Henry, a policy director at World Wildlife Fund.

And while China has banned most consumption of certain wild animals, it continues to permit four broad categories of breeding activity. Breeders are still allowed to raise certain wild animals in captivity for their fur, for research purposes and to supply zoos and circuses.

"Business interests put a lot of pressure on the Chinese government, arguing that if you don't include these animals, then we will be out of business, and we will lose money," said Peter K. Li, an associate professor at the University of Houston-Downtown and a China policy adviser for the Humane Society International.

Those interests may delay the implementation of a permanent ban on wildlife consumption. China's legislature, the National People's Congress, has yet to update the country's wildlife protection law, which only protects rare and endangered animals. Instead, the legislature concluded during its annual national meeting this May that it will look into drafting revisions, a lengthy process that can take years before amendments are approved.

Already, the suspension on wildlife trade has encountered particularly vociferous opposition from rural communities, some of which have become entirely economically reliant on wild animal breeding.

"During the coronavirus epidemic, some individuals exaggerated the relationship between the virus and animals, leading to a near-obliteration of the breeding industry," wrote Ran Jingcheng, an outspoken forestry official who regulates wildlife in Guizhou province, one of China's poorest.

Yao Yuanchuan, a bamboo rat breeder based in Sansui County in Guizhou, said dozens of farms in his small village reliant on bamboo rat breeding had already been shut down and forced to kill off their stock.

"Only a few smaller breeders have yet to deal with their stocks," Yao told NPR. He estimated that he lost 3 million yuan ($420,000) after he was forced to dispose of thousands of unsold rats.

Guangdong's Liu Ping demanded more compensation money for his animals. Other breeders lobbied hard to have the rodents excluded from new animal consumption regulations, to no avail. Local officials told him to kill his rats in exchange for up to 140 yuan ($20) in state compensation per rat, only about a third of their market value, claims Liu. He dug in his heels. To cut costs, he began hand-cutting bamboo to feed his rats rather than buy food for them.

In late June, Liu finally gave in. He dug a deep pit, put his hundreds of bamboo rats inside, and buried them alive. Afterward, he liberally sprayed the ground with disinfectant.

"I have no way of describing how bitter I feel inside," said Liu, " I invested all I had into this business."