Accessibility links
What Leprosy Can Teach Us About COVID-19 Crisis : Goats and Soda NPR correspondent Pam Fessler, author of Carville's Cure: Leprosy, Stigma, and the Fight for Justice, talks about her research into this once feared disease — and its connection to COVID-19. 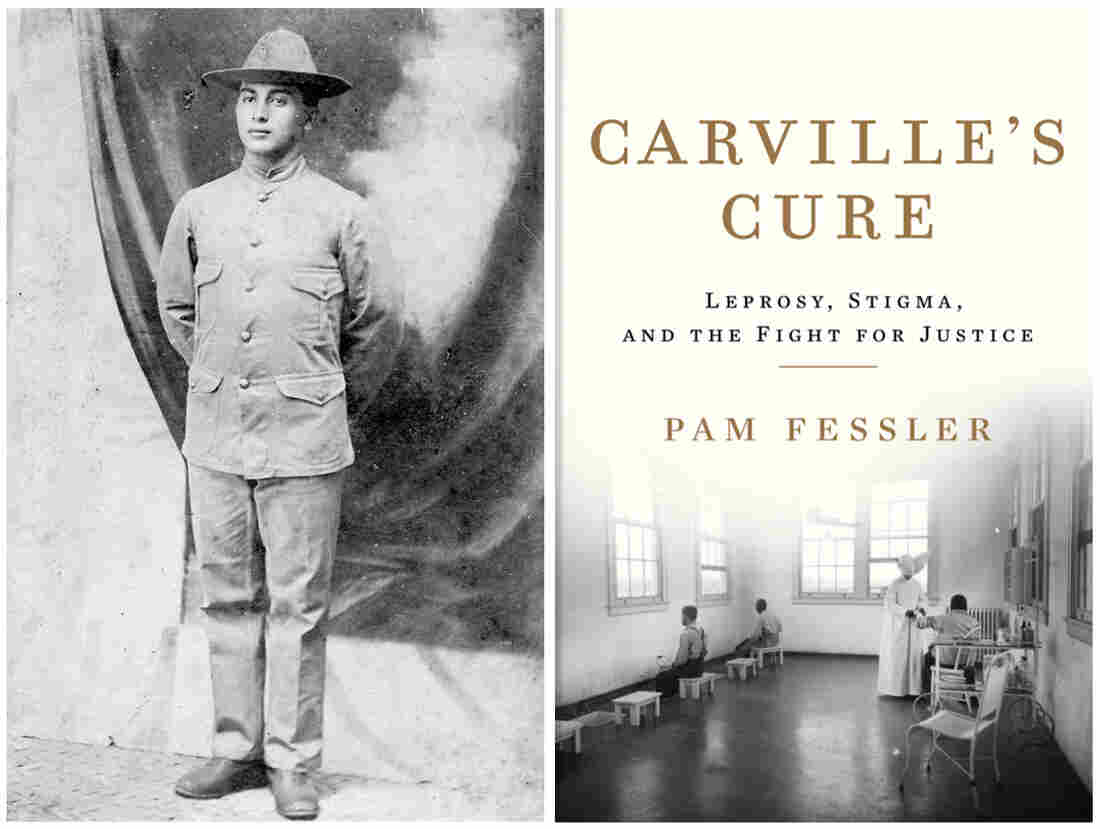 Morris Koll, grandfather of NPR correspondent Pam Fessler's husband, enlisted in the U.S. Army and was sent to the Philippines in 1902. That's when he contracted leprosy. In 1935, public health authorities took him to the national leprosarium in Carville, La. Right: A treatment room at the facility is depicted on the cover of Fessler's new book, Carville's Cure. Courtesy of the Koll family hide caption 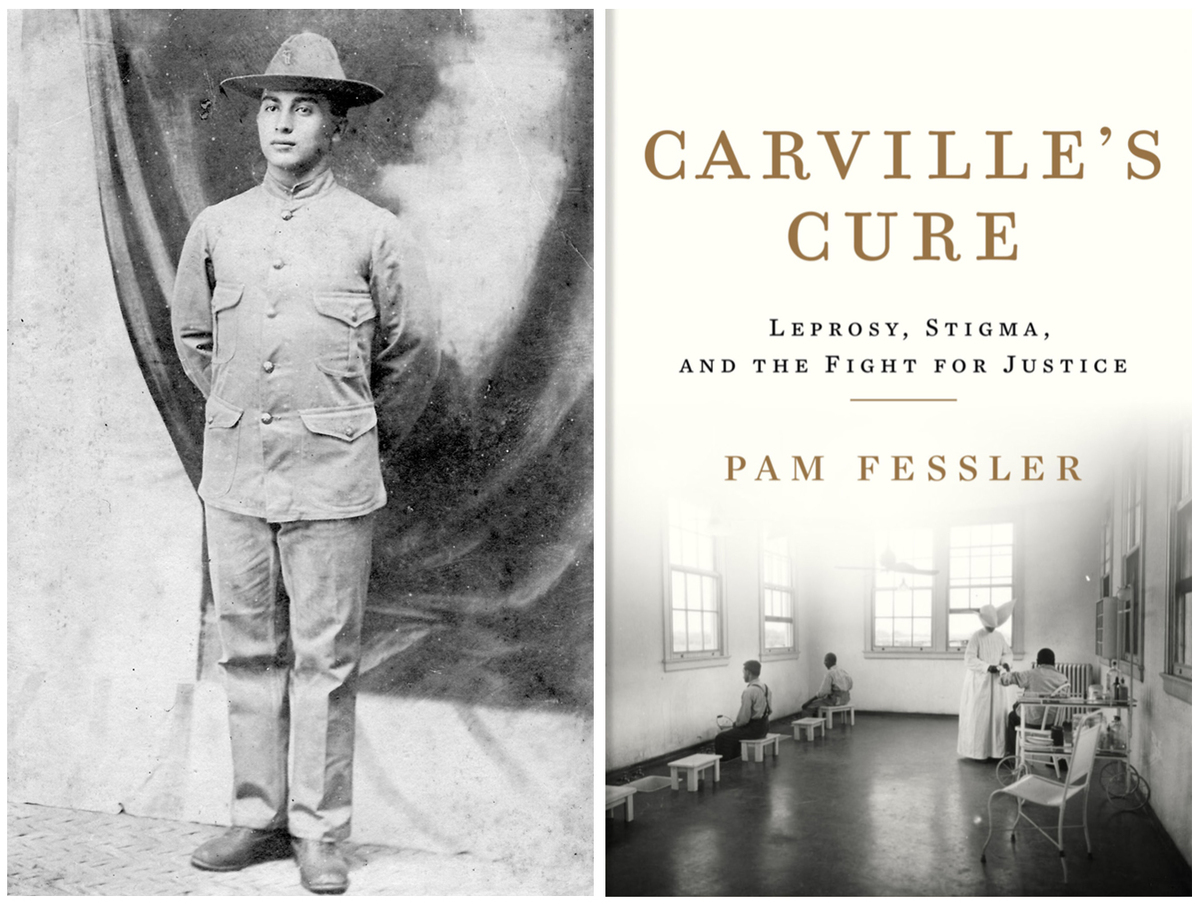 Morris Koll, grandfather of NPR correspondent Pam Fessler's husband, enlisted in the U.S. Army and was sent to the Philippines in 1902. That's when he contracted leprosy. In 1935, public health authorities took him to the national leprosarium in Carville, La. Right: A treatment room at the facility is depicted on the cover of Fessler's new book, Carville's Cure.

Courtesy of the Koll family

In 1998, NPR correspondent Pam Fessler learned a family secret that had been covered up for 63 years: Her husband's grandfather had leprosy. Her father-in-law revealed that he had returned from school one day to discover that his dad had simply disappeared, taken by public health authorities from their home in New York to the national leprosarium of the United States in Carville, La. He was confined there for the rest of his life.

Astounded, Fessler began digging into one of the most dreaded diseases in history. 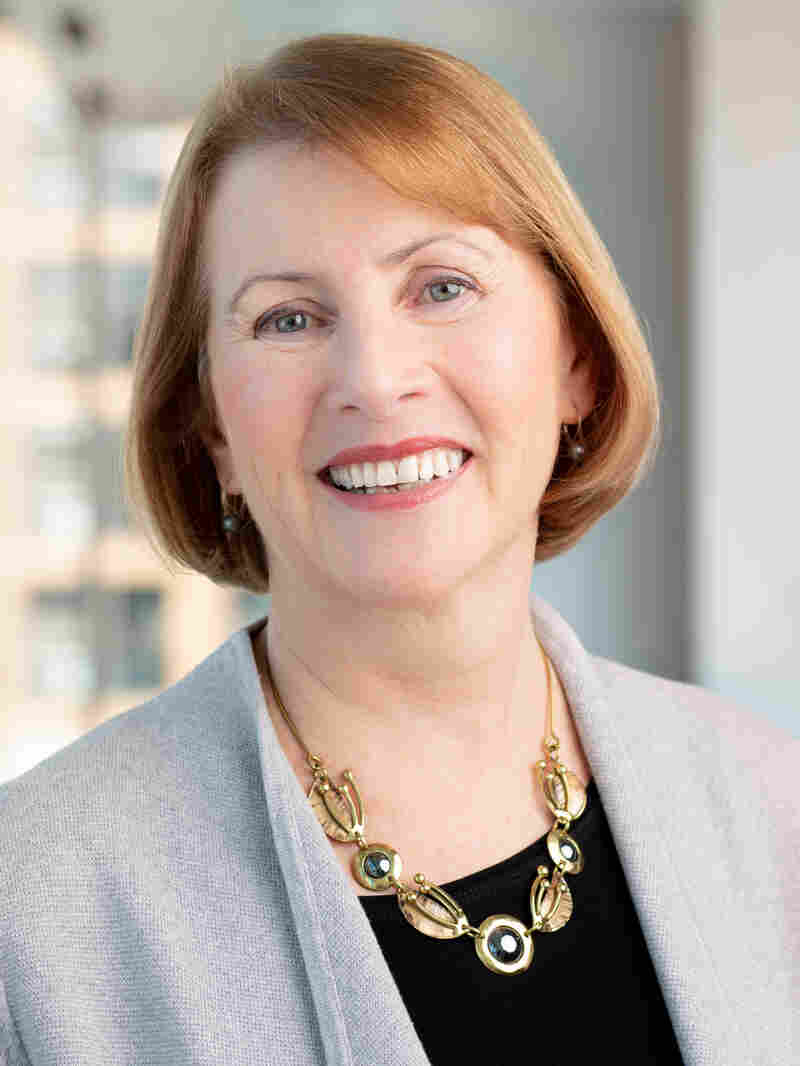 Fessler, NPR national desk correspondent, is the author of Carville's Cure, a book inspired by a secret in her husband's family — his grandfather was diagnosed with leprosy. Allison Shelley/NPR hide caption 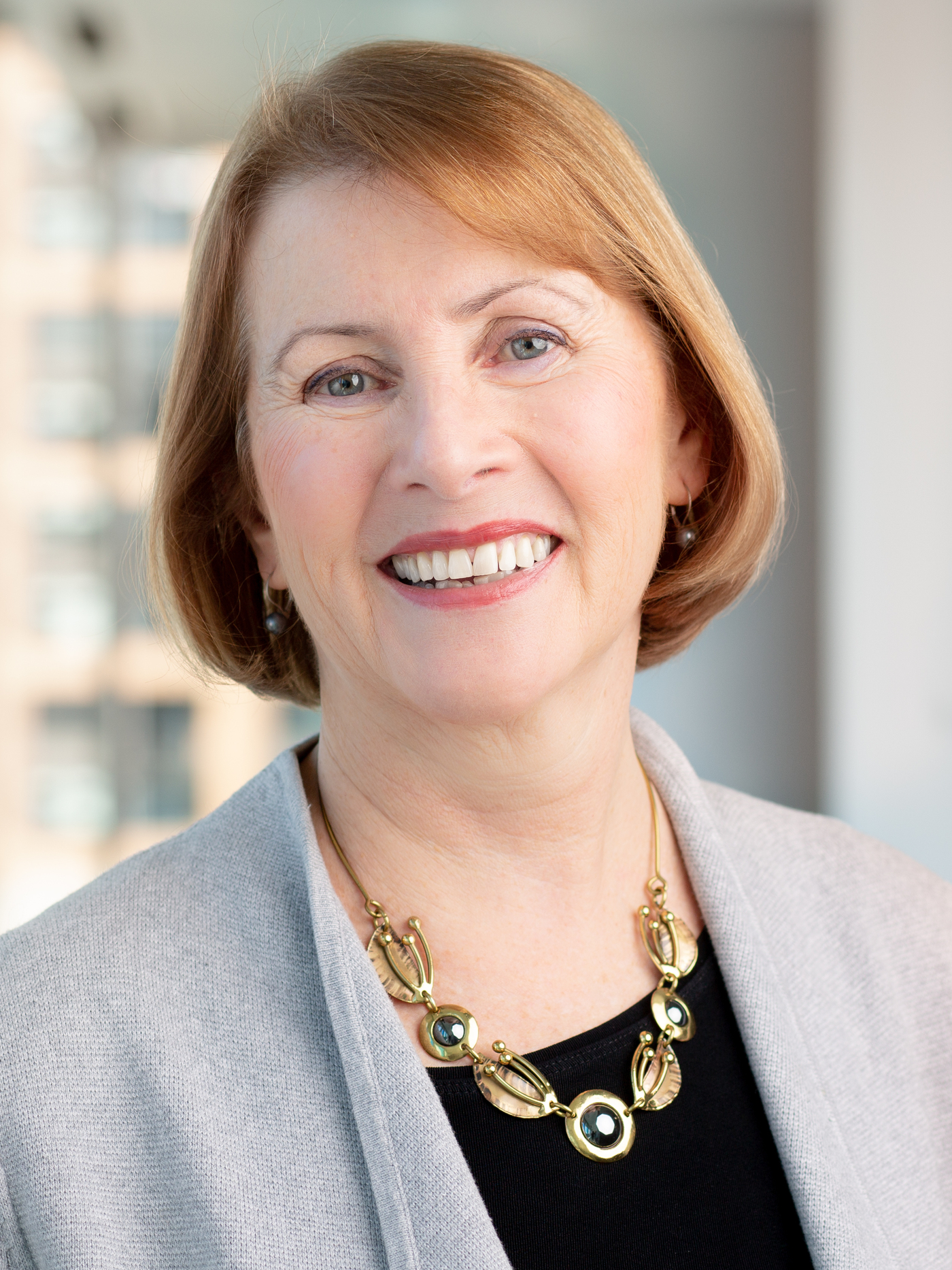 Fessler, NPR national desk correspondent, is the author of Carville's Cure, a book inspired by a secret in her husband's family — his grandfather was diagnosed with leprosy.

Back when Morris Koll was whisked away in 1935, many people believed — incorrectly — that leprosy meant someone was cursed, highly contagious and that their fingers and toes would soon fall off. A diagnosis would lead to being ostracized and quarantined for life, even in the United States.

Now the disease is called by the less stigmatizing name of Hansen's in honor of the scientist who discovered the bacterium that causes it. Because widely available treatments can avert or reverse the symptoms, which include discolored skin patches, nerve numbness and loss of sensation, the number of cases has plummeted. These days, 250,000 new cases are diagnosed each year, mostly in India, Brazil and Indonesia, with about 200 in the United States.

Leprosy Is Not Quite Yet A Disease Of The Past

The story of Carville, which was founded as the Louisiana Leper Home in 1894, gave Fessler a window into the evolution of this disease. It remained in its original location until what was then called the Gillis W. Long Hansen's Disease Center was moved to Baton Rouge in the late 1990s, though the Carville location continued to house patients until 2015. We spoke to Fessler about her newly published book, Carville's Cure: Leprosy, Stigma, and the Fight for Justice, and the relevance this story holds today. 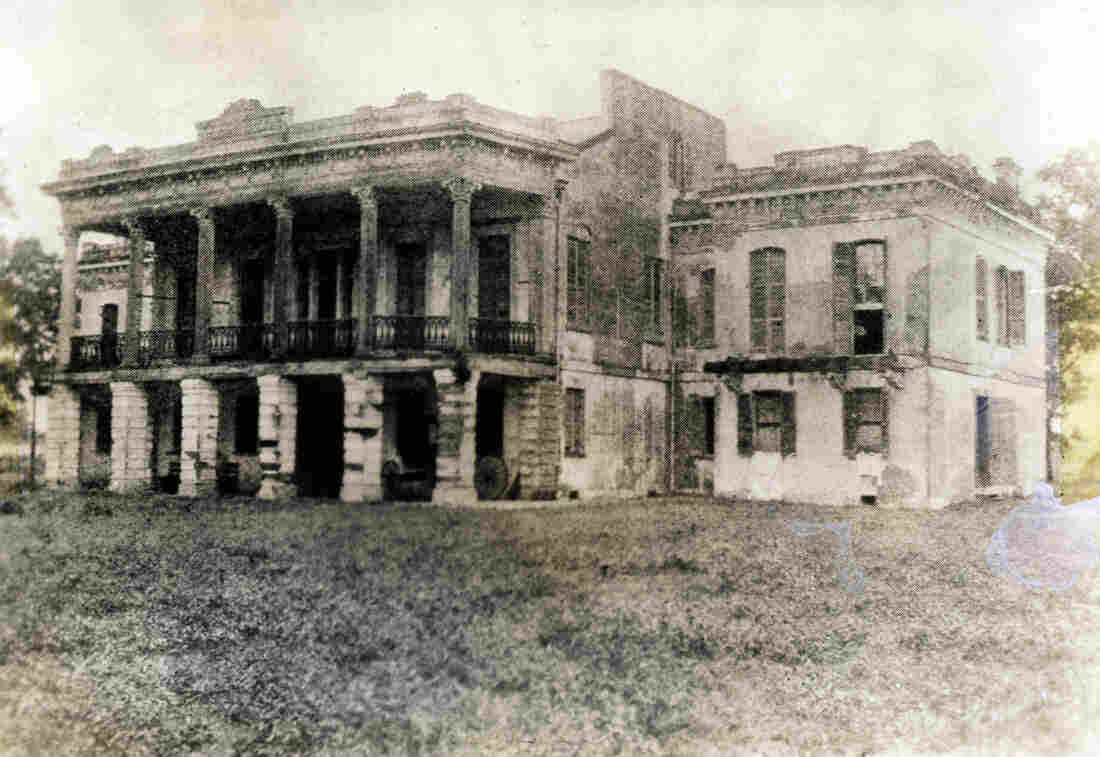 If Hansen's is curable, why do new cases occur?

Stigma and misinformation can still keep patients from seeking help. Sometimes people have internalized the stigma, afraid to reveal their illness because they fear this may be God's punishment for something terrible they did.

The world is dealing with COVID-19. Why should people care about leprosy now?

I've been particularly struck in both cases by the ways in which the lack of knowledge about a disease can open the way to misinformation and misguided policies that are not based on sound science. 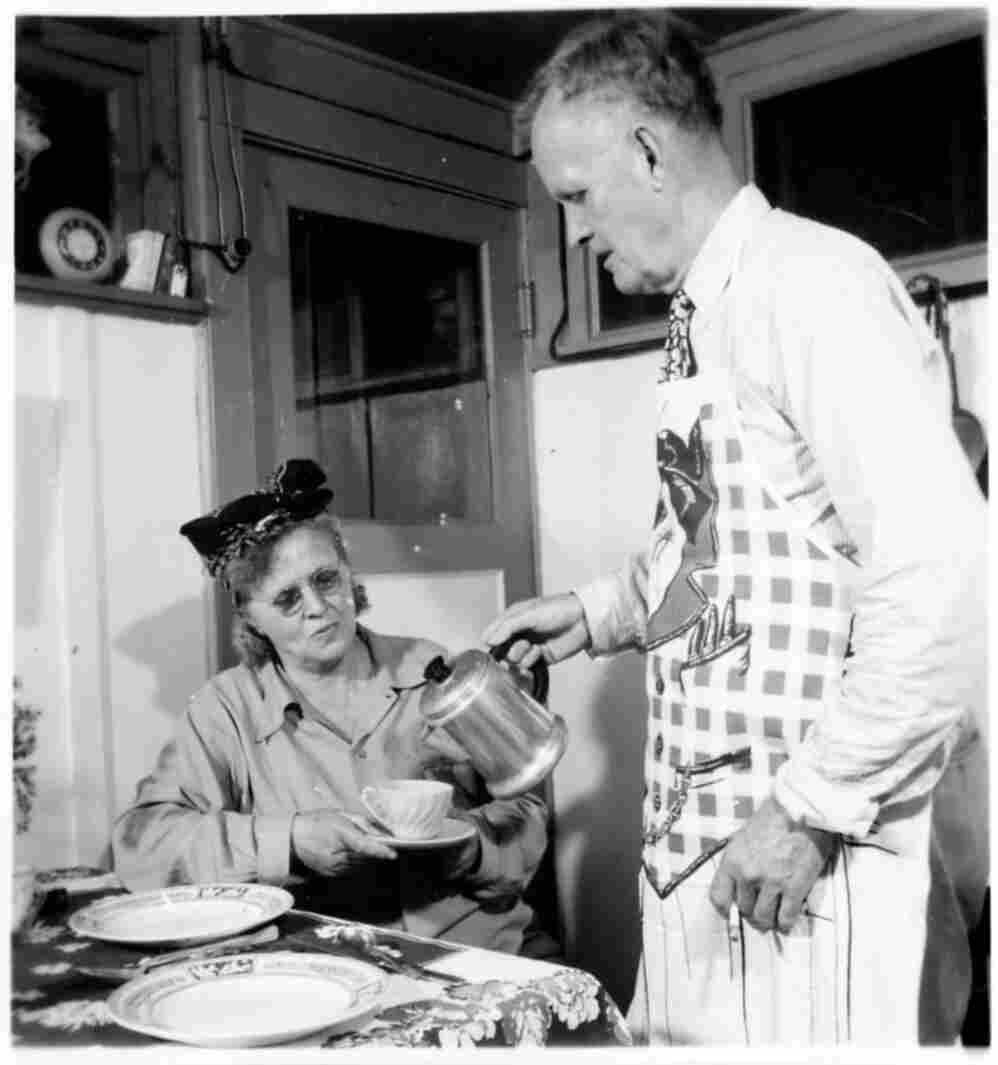 Hans Hornbostel visits his wife, Gertrude, a patient with leprosy, in her cottage on the grounds of the national leprosarium in 1948. The Japanese imprisoned both of them in the Philippines during World War II. They spoke out to get the right to vote reinstated for those at Carville, who lost their voting privileges when they became patients. National Hansen's Disease Museum hide caption

At the turn of the 20th century, a number of doctors correctly called Hansen's one of the least contagious of all infectious diseases, with malaria, smallpox and yellow fever posing more serious and widespread threats. But other doctors disagreed. Their fears about contagion were then amplified by the public's anxiety that rising numbers of immigrants would bring leprosy with them. Further fueling that, the novel Ben-Hur, which was widely read at that time, affirmed the belief that victims of the disease are cursed by God. It also depicts the hero's mother and sister suffering from leprosy in agonizing detail. All those factors drove public pressure to isolate people with the disease from society and to the formation of the hospital at Carville, where many people remained separated from their families for the rest of their lives.

The irony is that with Hansen's there was very little actual danger of contagion. In fact, we now know that 95% of humans are immune. But there was a public overreaction in support of isolating patients. By contrast, we know that COVID-19 is extremely contagious, and yet many people are choosing not to follow public health guidelines.

In both cases, what it shows me is that in the absence of solid leadership and information, the public pushes the health authorities to act in ways that fit the public's own perceptions, beliefs and fears. And, of course, with COVID, there's still a lot we don't know, which only exacerbates the problem!

Is there another parallel in the use of anti-immigrant rhetoric to stoke anxiety?

The turn of the century was a time of xenophobia with widespread fear that Asian immigrants were going to take away American jobs. They were also worried that Asian immigrants would bring with them a disease they called the "Oriental leprosy." Labor leader Denis Kearney, for instance, warned about "moon-eyed lepers," and a former head of the Louisiana Board of Health cautioned against "vicious filthy leprous hordes from Asia" coming here to spread the disease. Despite there being no evidence at all, the biggest fear was that Asians who worked in laundries would spit into the clothes. 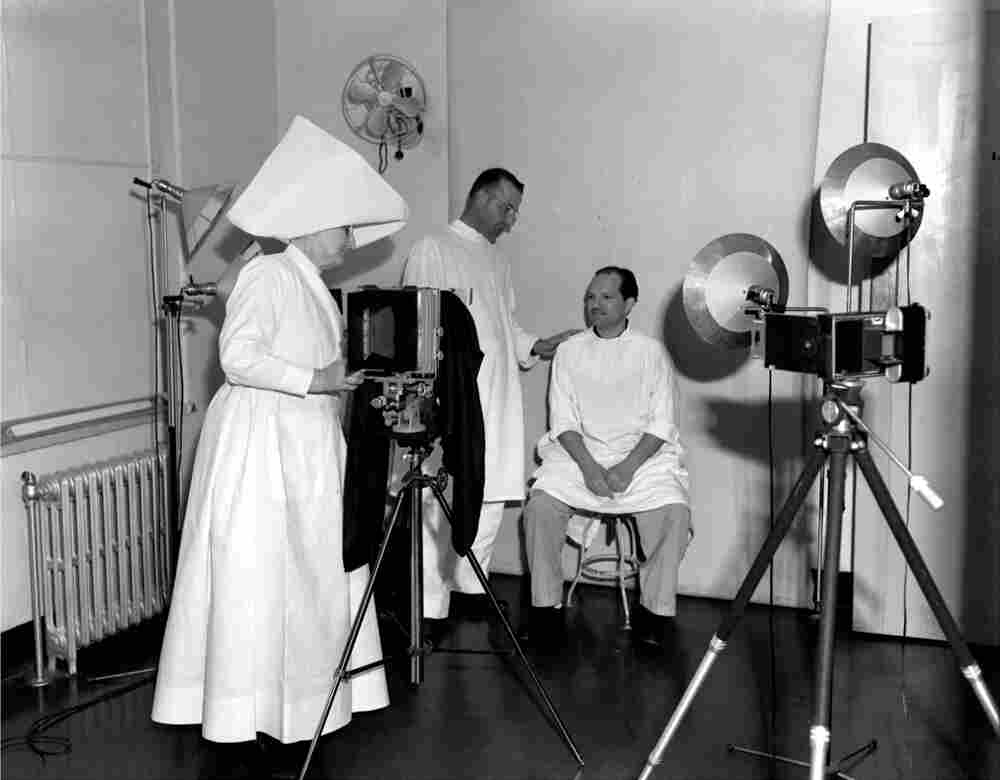 Sister Hilary Ross takes photos documenting a patient's treatment progress in the infirmary at the leprosarium in Carville, circa 1950. The photo was taken by Johnny Harmon, a patient with leprosy, for The Star, a magazine for the residents at Carville. National Hansen's Disease Museum hide caption

Today, COVID-19 has been called the "kung-flu."And there are many cases of Asian Americans being shouted at and accused of causing and bringing COVID to the United States.

These are all examples of how some people can weaponize a disease to denigrate and demonize immigrants. It is appalling, and it is another reason I wrote the book.

Although Carville operated in the midst of the Jim Crow South, you say the patients formed a community that in some ways was a model of diversity. How so?

This was amazing. Here we are in the Deep South in the first half of the 1900s, and these patients, 300 to 500 at a time, had all been thrown together by their common illness and bound together by the shared discrimination they also suffered. They were of Asian descent, Hispanic descent, white, Black, rich, poor, children and adults. There was some segregation in the dormitories and the dining room, but the classrooms were integrated, their social activities were integrated and everybody got paid the same amount for doing the same jobs. They were there together, and that helped encourage and propel them to stand together to form an advocacy campaign that in 1946 succeeded in their regaining their voting rights [which had for many years been rescinded]. 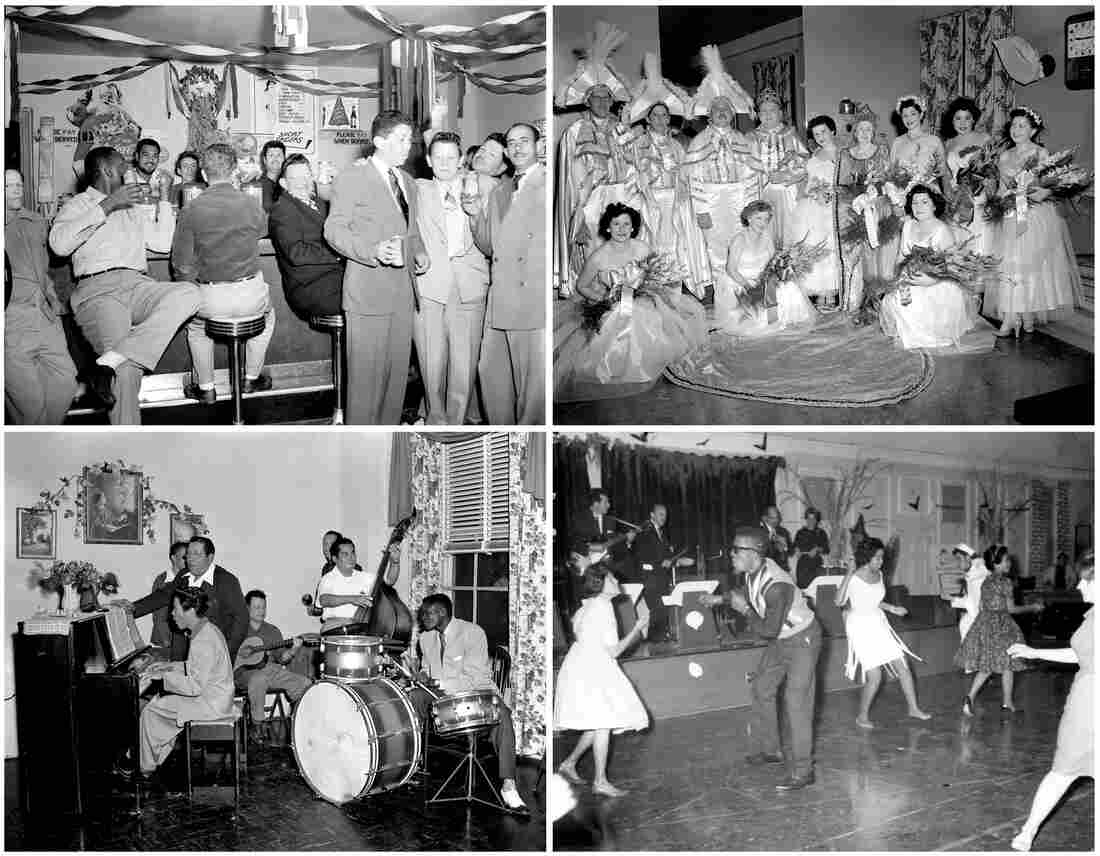 Patients at Carville were a diverse group — Black, white, Asian, Latino, rich and poor. Stigmatized because of their leprosy, they formed a tightknit community. Top left: a Christmas party, circa 1950. Top right: Patients dress as King Albert and Queen Victoria at a Mardi Gras bash in March 1954. Bottom left: A patient band rehearses in the 1950s. Bottom right: a patients' dance in the 1960s. National Hansen's Disease Museum hide caption

So you also found some positive aspects?

Yes, this is also a hopeful story about community and the resilience of human beings. And we see this with COVID, too, in all these wonderful health care workers and communities trying to help people with the illness. Hopefully this will also lead to a COVID vaccine and treatments.