Accessibility links
Teen Girl Activists On Pandemic Life — From New Plans To 'Phone Detox' : Goats and Soda Leaders in the global group Girl Up went to their annual conference — virtually — last week. We interviewed some of the attendees to see what's changed during the coronavirus crisis. 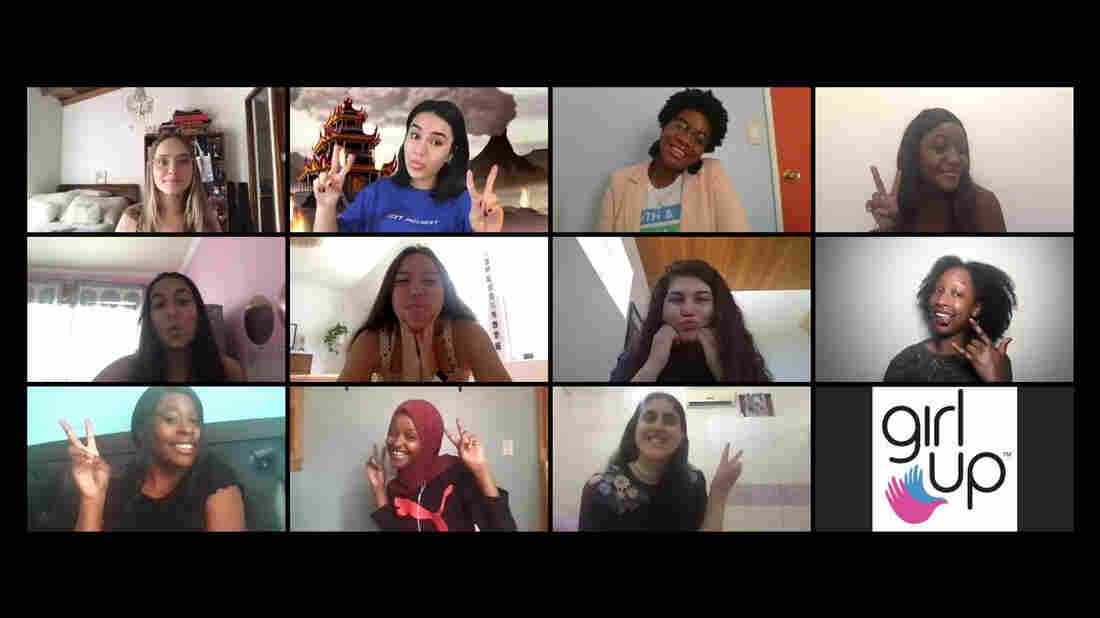 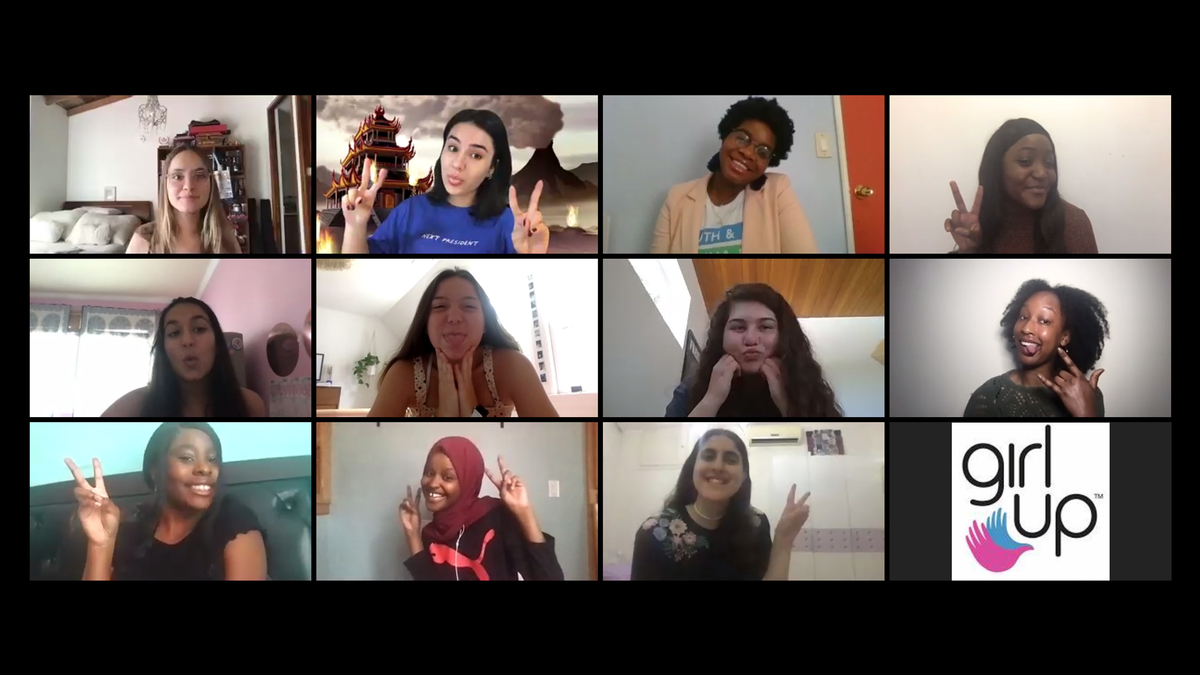 The pandemic has definitely changed things for teenage girl activists. They're worried about new problems, they're facing bad attitudes – and they're experimenting with new quarantine lifestyles, including one teen's three-week "no-phone" detox. (Spoiler alert: She survived and thrived.)

NPR spoke to 11 girl activists during the (virtual) 2020 Girl Up Leadership Summit last week. Established by the United Nations Foundation, Girl Up encourages young females to advocate for the health, safety and education of girls and women around the world.

For many of the teens, the pandemic has worsened the problems against which they are passionately fighting. But that has only made them more determined to speak up. Here's what they had to say in a joint Zoom interview. (This conversation has been edited for brevity and clarity.)

Muse is the co-founder of Kow iyo Labo, a nonprofit that has offered free tutoring and mentoring for low-income students in Minneapolis for two years. Funded mainly by donations, the group has helped more than 200 students to date. But the coronavirus shut down the free, in-person lessons, and online learning isn't an option since many of her regular students don't have access to computers or Wi-Fi, she says. "Kow iyo Labo" means "1 and 2" in Somali and stands for two things, Muse says: "Education equity begins very early on before kids are even learning their numbers, and we, as a youth-led education movement, are just getting started!" The nonprofit has put a pause on tutoring until in-person lessons can resume.

Goel, whose ethnic background is Indian, says she has seen racism against Asian communities intensify during the lockdown, especially at the beginning of the pandemic when the virus was first reported in China. "A lot of my friends got hate messages, hate texts," she says. "People were saying things like 'Go back to your country' and using slurs, curse words and racial stereotypes. All these messages impacted their mental health. It makes one anxious to go into the public. It also just made us feel afraid and insecure of who we are as people."

The racial justice movement that was galvanized by George Floyd's death resonates deeply with them.

Growing up in South Carolina, Louis-Jean has experienced racism firsthand. "A lot of people — especially in middle school — would say the N-word. I remember one time, a kid had a Confederate flag on the bus and was saying KKK slogans. I always felt like nobody really said anything." When she saw the Confederate flag removed from her statehouse in July 2015 after a white supremacist carried out a mass shooting, Louis-Jean started speaking up. "It ignited me to take that step and encourage my peers and create awareness." Now she volunteers with the Save the Children Action Network to urge elected officials to address issues critical to children's lives, including racism.

Logan is an advocate for gun violence prevention and safety in vulnerable neighborhoods such as hers in the Bronx. She speaks up and writes about issues that make her and other minorities feel threatened and unsafe. "A lot of my peers have been impacted by gun violence and violence in general in our neighborhood because there's a lack of protection for Black and brown youth," she says. "With COVID-19, I saw that those same communities didn't have access to medical resources." Once the Black Lives Matter protests began, she took to the streets to protest with the New York Justice League: "I think it says a lot about our country, about America, that Black people have to put their lives on the line within a global pandemic to advocate against racism." Logan also speaks out about issues such as over-policing in schools.

They're as passionate as ever about girls' rights.

Onanuga attends a predominantly Black, underprivileged school in South London. "There is such a massive gap in STEM [science, technology, engineering and mathematics]. We're told it's a man's world. We're told that that line of work isn't for women. That's not the case. Whatever a man can do, as long as I'm headstrong, I can do it as well."

"I am a Muslim Arab girl living in the Middle East. There's lots of stereotypes and misconceptions about Arab women. Lots of people think we are all oppressed, and this undermines the achievements of Arab women. I want to show Arab girls that you can do something and be whoever you want. From a very young age, I was extremely interested in politics. My passion is women political leadership and women and peace building. Lebanon is considered the most progressive Arab country, but right now we only have six women in Parliament out of 128."

They worry about vulnerable communities.

"I went to 100% Black, underfunded elementary and middle schools in Minneapolis," Muse says. She got her first glimpse at the inequities that exist in education when she transferred to a better-funded high school in the suburbs. "Coming from a place where our gym, cafeteria, everything was one classroom, then going to a place where they have a gym, a cafeteria and a huge basketball court the size of my whole [former] school. My friends [from my old school] would see me going to things like speech and debate, and they would say, 'Oh, I wish our school had that.' The high school I would have [attended] had no clubs. No extracurricular activities. It was shocking."

Since the COVID-19 lockdown began, violence against women all over the world has intensified, according to research conducted by U.N. Women. Beyer says she is particularly concerned about women in her country, where calls to the nation's domestic violence hotline reportedly have increased 150% compared with this same time last year.

They're big TikTok fans in spite of the controversy over the social media platform.

"Honestly, for me it's TikTok right now. I think other platforms are a little boring. It's super informational. I see things about nonprofits, protests and social justice movements all the time. I was able to see ways to stay safe during the protest or ways to advocate if you can't make it to protests."

"Personally, it's always going to be Instagram first for me. But one of my friends has been getting quite a following on TikTok sharing her opinions. You get these short videos — 15 seconds or a bit more to make a point. And it makes people really direct and bold, and that starts so many conversations. When you have a short time to talk about something, you just say the biggest point."

They're making the best of quarantine life.

"I've actually been thriving in quarantine, and that is an indicator of my privilege — living in a house that has running water, electricity. I really do value family time a lot. My little brother, currently 11, was diagnosed with a brain tumor two years ago. On June 6, he celebrated two years of being cancer-free! We sang happy birthday, had cake and spent time together as a family. Whether baking with my mom or a game night or watching telenovelas, it's amazing to have that time."

"I've been spending so much time with my parents. Lots of bonding, lots of cooking, lots of game nights. I did a three-week phone detox, which was amazing." Her goal was to focus on herself and issues important to her instead of her phone. In her phone-free time, she wrote about the Black Lives Matter movement, practiced Mandarin, went on walks, gardened, cooked — and got a good night's sleep: "Beauty sleep is a thing, and it's been working."

"I've really been enjoying The Politician on Netflix. It's about a group of young people who are running for student council in the first season and in the second season are running for state Senate. It's super-funny and really inclusive."

"I've been really enjoying Hasan Minhaj's show, Patriot Act. I think that he is such a great person in terms of explaining everything really well. Also, for me, seeing an Asian in comedy and seeing that representation is just so valuable. We don't really see a lot of Asians in media."

"I feel like my answer sounds way less intelligent in comparison, but sometimes you need to take a break. I've been watching a lot of rom-coms and chick flicks just so I can take a mind escape from everything going on."