Accessibility links
Young Women Of Pakistan Speak Out To Find The Disappeared : Goats and Soda They're speaking out and leading protests to learn the fate of fathers and brothers who are among the many hundreds of disappeared Pakistanis — most of them men. Are they making a difference?

The Disappeared Of Pakistan Have New Champions: Young Women

The Disappeared Of Pakistan Have New Champions: Young Women 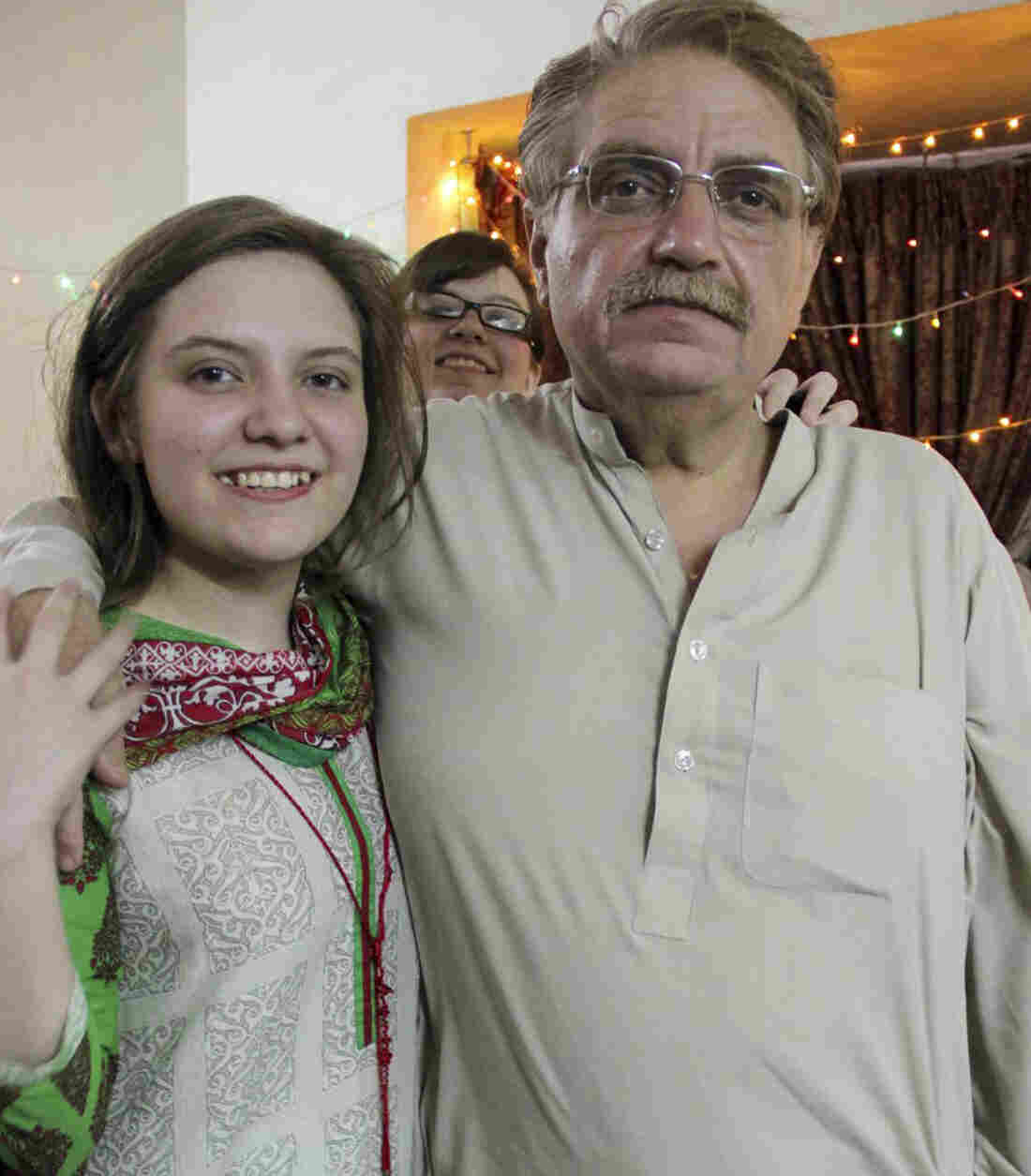 Idris Khattak disappeared in November. He is pictured with daughters Talia Khan and Shumaisa (in the background), on July 29, 2015, in Islamabad. Mahnoor Khan hide caption 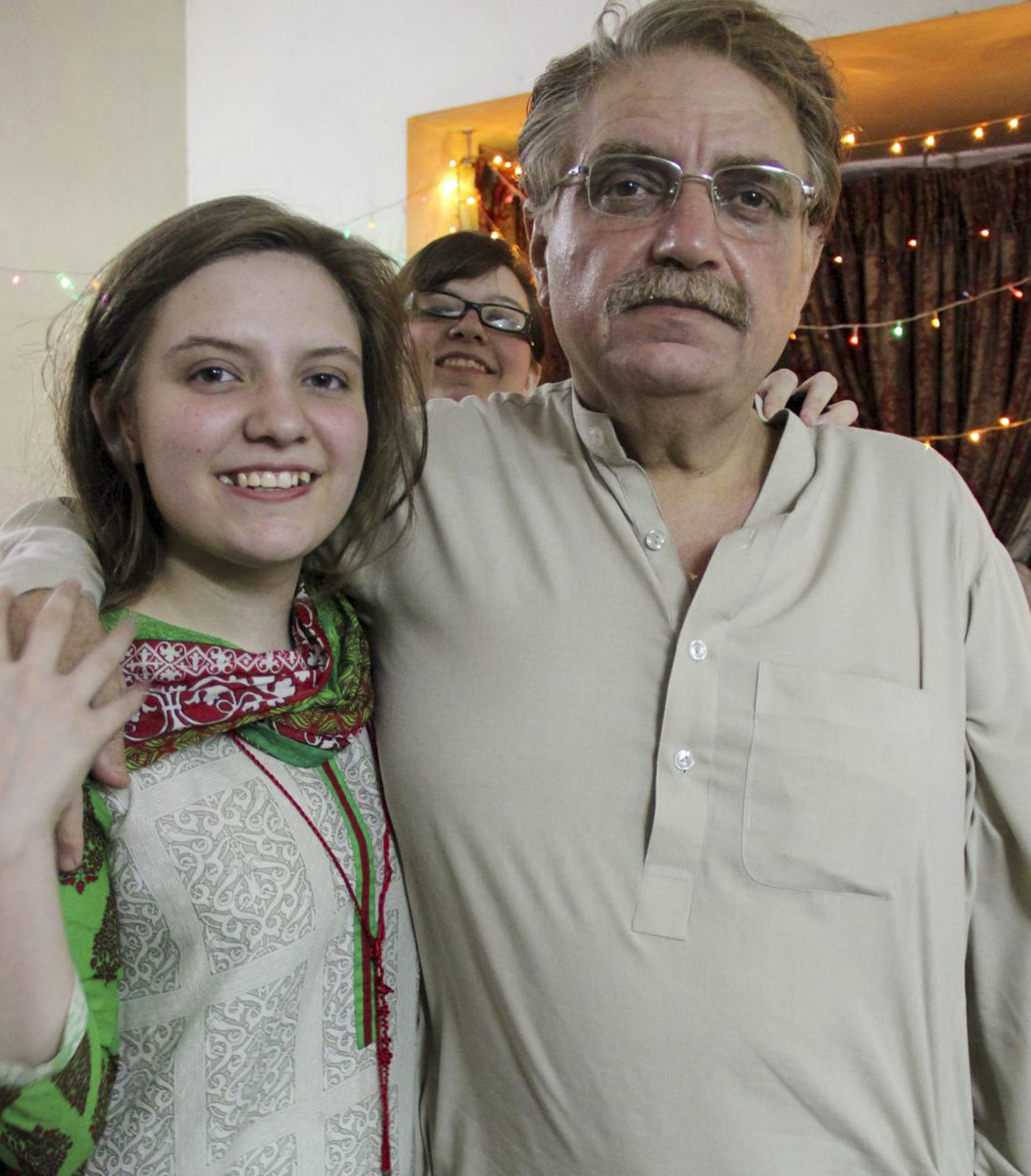 Idris Khattak disappeared in November. He is pictured with daughters Talia Khan and Shumaisa (in the background), on July 29, 2015, in Islamabad.

When Talia Khattak's father was bundled out of his vehicle by men in plain clothes in November, she stayed quiet, fearing he'd be harmed by his abductors if she spoke out. Months later, his whereabouts still unknown, she realized her father, Idris, might never be released without a fight. 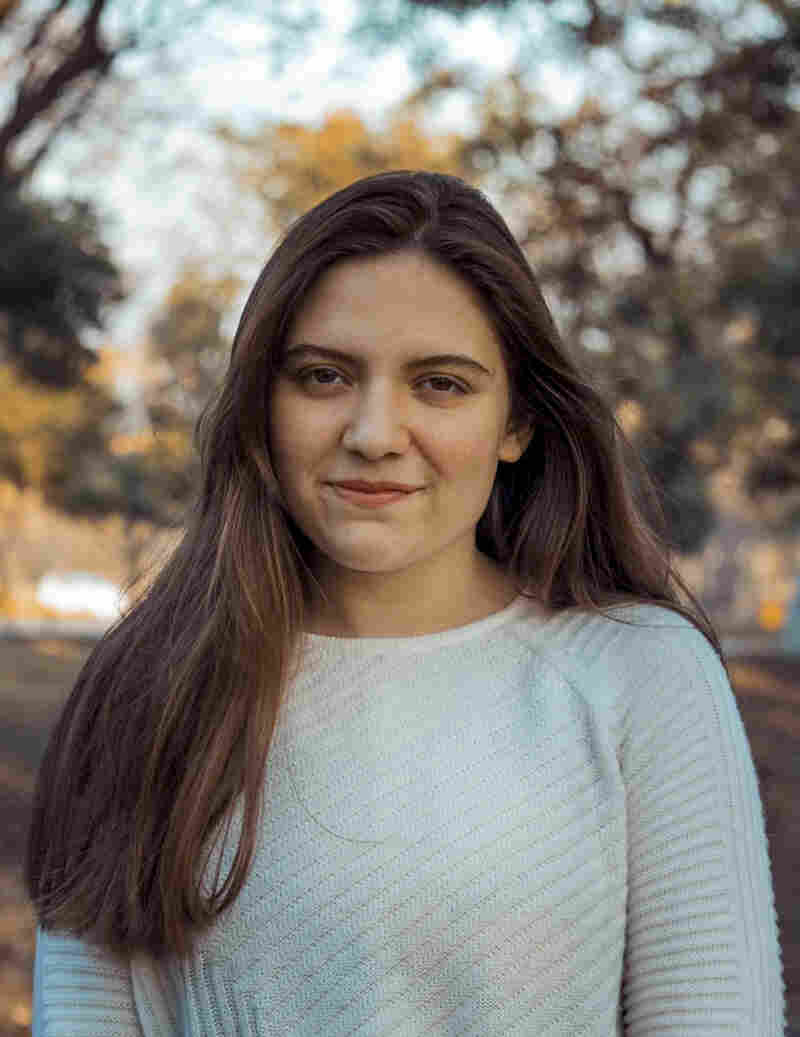 Talia Khan Khattak is speaking out, writing articles and making videos in hopes of finding her father. The photo is from December 2019, the month after her father disappeared. Sheikh Nouman hide caption 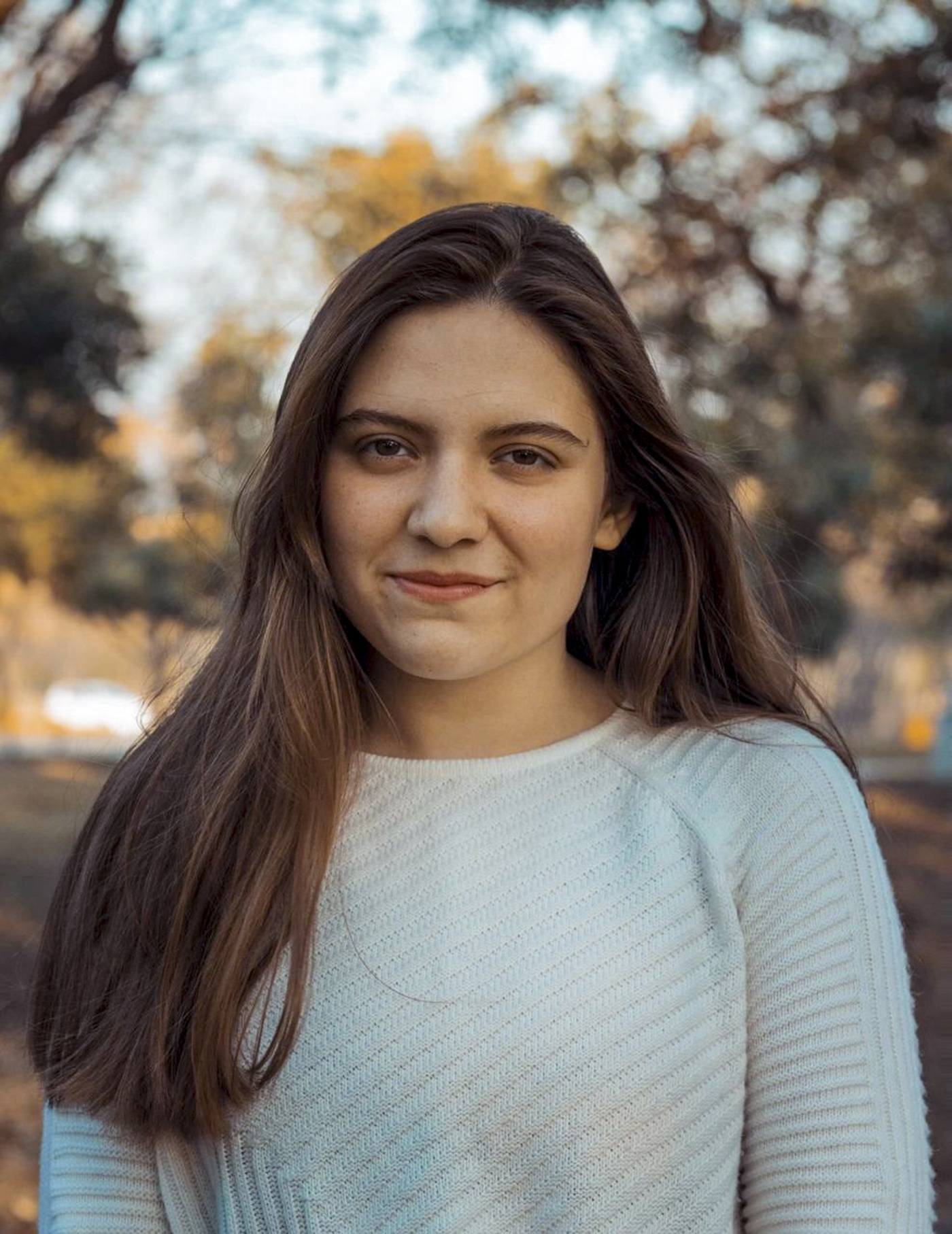 Talia Khan Khattak is speaking out, writing articles and making videos in hopes of finding her father. The photo is from December 2019, the month after her father disappeared.

So in May, Khattak made videos and wrote articles about her father's fate. In doing so, the 20-year-old became part of a group of young women in Pakistan who have emerged at the forefront of the fight against disappearances. They're able to take on this battle because even though security forces are increasingly heavy-handed, they're less likely to harm these women than male relatives of the disappeared.

"Our men cannot come in front," says Sammi Baloch, 22, whose father, Deen Mohammad, disappeared more than a decade ago from the impoverished province of Balochistan, where there is a low-level insurgency. "When they come in front, they will also be kidnapped by the state."

The women are leading protests, speaking to media, making videos and sharing images of male relatives who have gone missing. This is new, says Omar Waraich, South Asia director of Amnesty International. The women are "playing a political role that's almost been forced upon them," he says, "because they feel that unless they speak out on behalf of their fathers or their brothers, no one else will."

Waraich says these disappearances emerged after Pakistan joined the U.S. war on terror after 9/11. It began with suspected members of extremist groups around the Pakistan-Afghanistan border. Now, "this is something that has reached deep into Pakistan's heartlands," he says. "No community has been spared in recent years." Agencies of Pakistan's most powerful institution – the army – are believed to be behind many of the disappearances, Waraich says. Those taken appear to be overwhelmingly men and include critics of the military, human rights activists, those who documented disappearances, supporters of ethnic movements in Pakistan's provinces – whether outright separatist movements and those simply calling for more provincial powers.

In 2011, Pakistan created a judicial commission to investigate disappearances, beginning with 136 cases. Nine years on, they have investigated over 6,500 incidents, and in December, the commission said 2,400 people remained unaccounted for. Those figures are likely an undercount, said Zohra Yusuf, a prominent human rights activist, because many families of disappeared persons do not trust the commission – so they don't report the cases.

The prime minister Imran Khan, who once protested against the many disappearances approved a draft law in 2018, criminalizing the practice, but it has languished. Waraich says that's because Pakistan's most powerful institution, the military, is behind many of the disappearances. "True power lies with the armed forces – and they do not want to see accountability for armed forces."

Khattak's father was affiliated with a small political party. He'd done research for Human Rights Watch and Amnesty International in Pakistan and Afghanistan. But Khattak said her father hadn't done that sort of work for years, and she was not aware of any threats to him.

In November, when Khattak told her father she was going by train across Pakistan for a conference, he was worried about her because weeks before, a railway fire killed dozens of people.

"He's a very protective parent," says Khattak. Her father raised his two daughters since they were children – after he and their mother divorced and she returned to her native Russia. "He was doing almost everything: the cooking, the cleaning, everything."

Her father promised to call every hour during her day-long train trip but only called once. "He sounded strange and hurried and said he'd lost his charger." A few days later, a friend sent her a text: "The first sentence was I am sorry your father was abducted," she recalled. "I thought it was a joke."

It wasn't. It emerged that Khattak's extended family were hiding the news, hoping he'd be released before she found out. Khattak says her family also urged her to stay quiet, while a lawyer filed a habeas corpus petition in the local high court, demanding to know where her father was held. "We shouldn't even talk about it, think about it," she recalled being told.

But in court, representatives of government security agencies denied they had her father, according to rights group Front Line Defenders. Then the pandemic hit. Khattak's college shut down and she returned to her childhood home. It was empty without her father. "That's when I actually realized there was no home to come back to," Khattak says.

She decided to defy her extended family and speak out, hoping that might shake her father's abductors into freeing him. The risk that they would hurt him, she decided, had to be taken.

In May, soft-spoken Khattak recorded a video in Urdu, explaining her father was abducted. Amnesty International helped her make another video for Father's Day. "This Father's Day, I don't know if my father is alive. I don't know if he has food today," she recounted.

Amnesty helped her pen an editorial published in the British newspaper, the Independent. Her activism prompted U.N. human rights experts to tell the Pakistani government in an open letter that they were "appalled" by her father's disappearance.

Other young women are also speaking out, like Baloch, the 22-year-old student, who has led hunger strikes, written editorials and recently led a protest dominated by young women. Other women like Mehrang Baloch, Hasiba Qambrani and Seema Baloch speak to the media about their missing loved ones.

It seems the women are making a difference. In June, a party from Balochistan, where the disappearances are most frequent, exited from the ruling coalition, saying the government hadn't done enough to resolve the issue. "People want this, need this, to be addressed," said Sana Ullah Baloch, a senator with the Balochistan National Party.

But women like Baloch says the real impact will be seeing her father, or knowing his fate. She fears he was killed. "If you have killed my father, then tell us where he is buried," she longs to tell her father's abductors. "So we will go there and we will satisfy ourselves that our father is no more."

Khattak has had more luck. Seven months after her father disappeared, military intelligence officials said he was in their custody, accused of violating the country's official secrets act. That doesn't mean he'll be released soon – or at all. But Khattak hopes against hope. "Whenever there's a knock on the gate," she says, "I think maybe it will be my father coming back home."