Accessibility links
The Ideas Of A Pioneer In The Environmental Movement Are Finally Recognized : Goats and Soda Rattan Lal, an Indian-born scientist, has devoted his career to finding ways to capture carbon from the air and store it in soil. Today, that idea has a catchy name: regenerative agriculture. 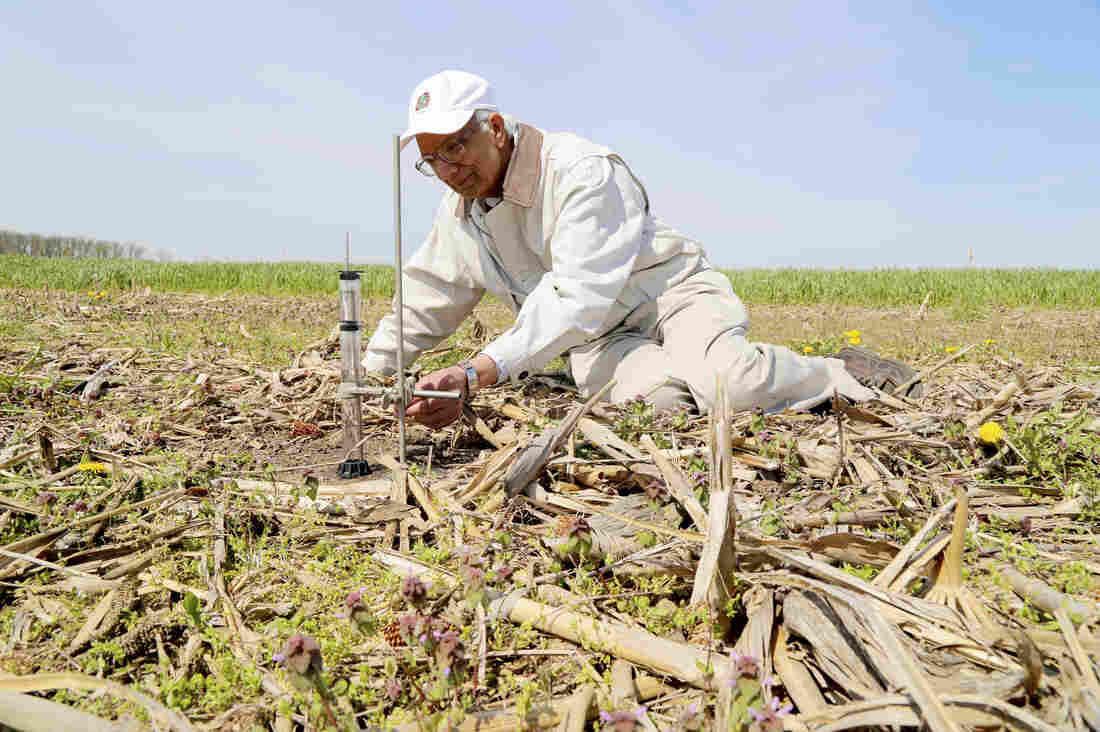 Rattan Lal, an Indian-born scientist, has devoted his career to finding ways to capture carbon from the air and store it in soil. Ken Chamberlain/OSU/CFAES hide caption 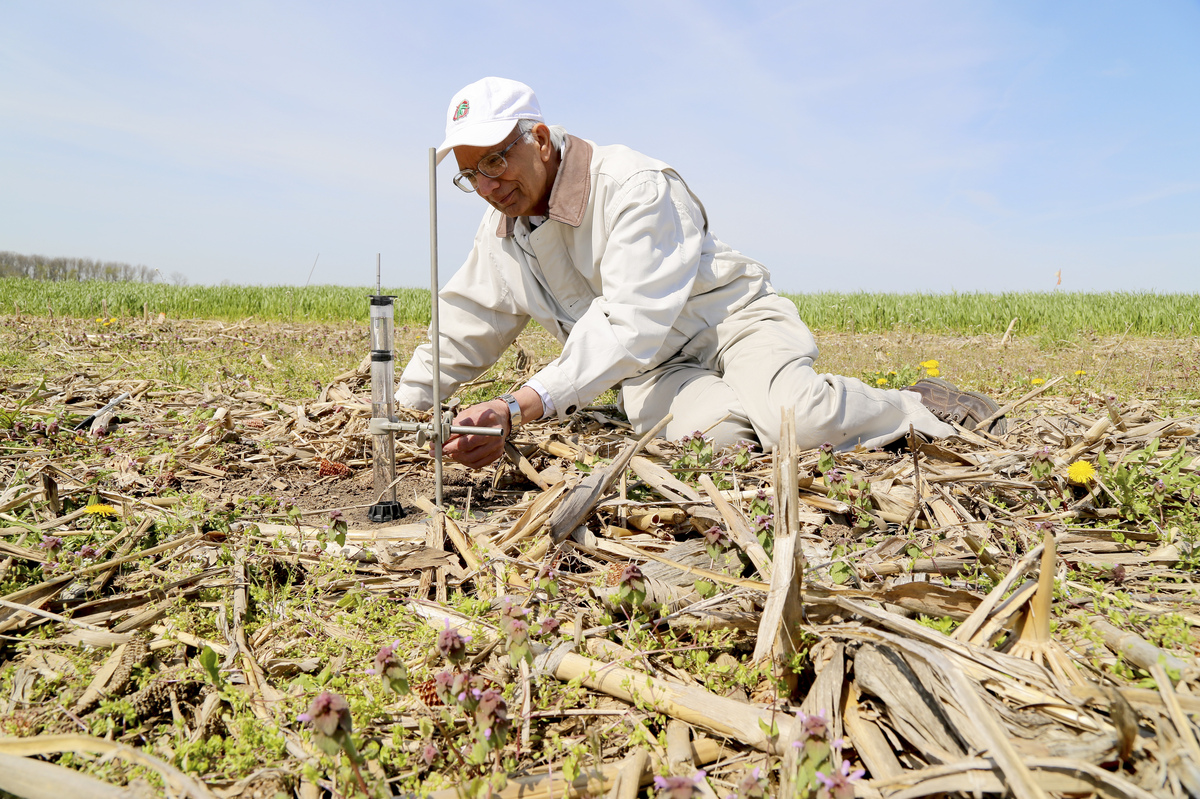 Rattan Lal, an Indian-born scientist, has devoted his career to finding ways to capture carbon from the air and store it in soil.

More than 40 years ago, in Nigeria, a young scientist named Rattan Lal encountered an idea that changed his life — and led, eventually, to global recognition and a worldwide movement to protect the planet's soil.

Lal was fresh out of graduate school, recruited to join the newly established International Institute of Tropical Agriculture, and given an assignment that, in hindsight, seems ridiculous in its ambition. "I was 25 years old, in charge of a lab, given the mandate of improving quality and quantity of food production in the tropics!" Lal says.

He struggled. The problem was the soil. Because of climate and geological history, it was more fragile than what he'd seen in India, where he grew up, or Ohio, where he'd received his Ph.D. Lal cleared parts of the forest for his research plots, but when the soil lost its vegetation and was exposed to sun and rain, it quickly deteriorated. What Lal calls the "life blood of the soil" — the so-called organic matter, made of microbes and decomposing roots, which holds moisture in the soil and provides a fertile bed for growing seeds — vaporized or washed away, leaving behind gravelly dirt as hot and hard as a road.

One day, a famous scientist named Roger Revelle came to visit. Revelle was one of the pioneers in the field now known as climate science. Lal told Revelle about his problems; about how the organic matter kept disappearing. Revelle pointed out that it was escaping into the air in the form of carbon dioxide, the main greenhouse gas. Then Revelle asked a question: "Can you put it back?"

"That simple statement, 'Can you put it back?' was my introduction to climate and soil," Lal says. 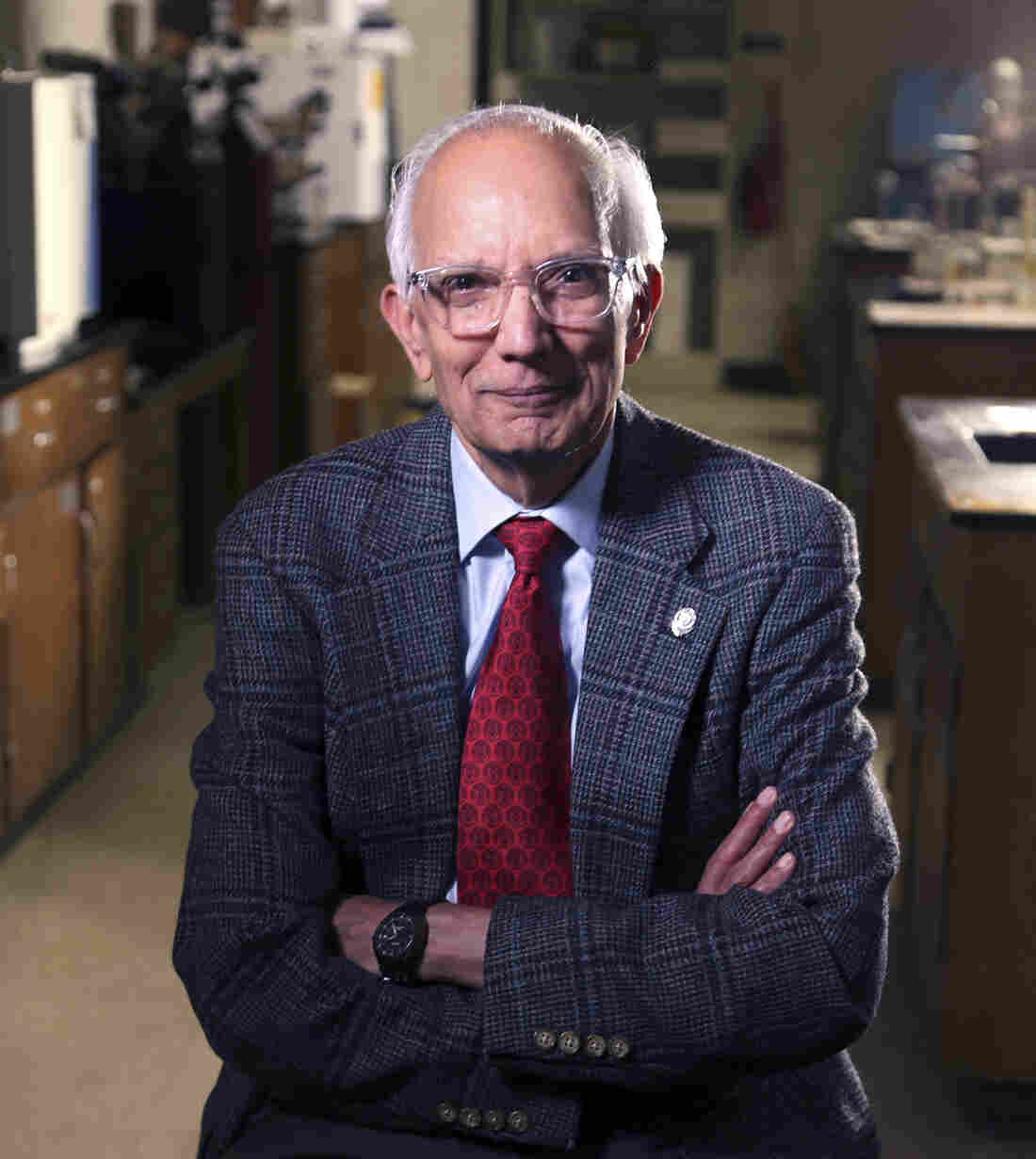 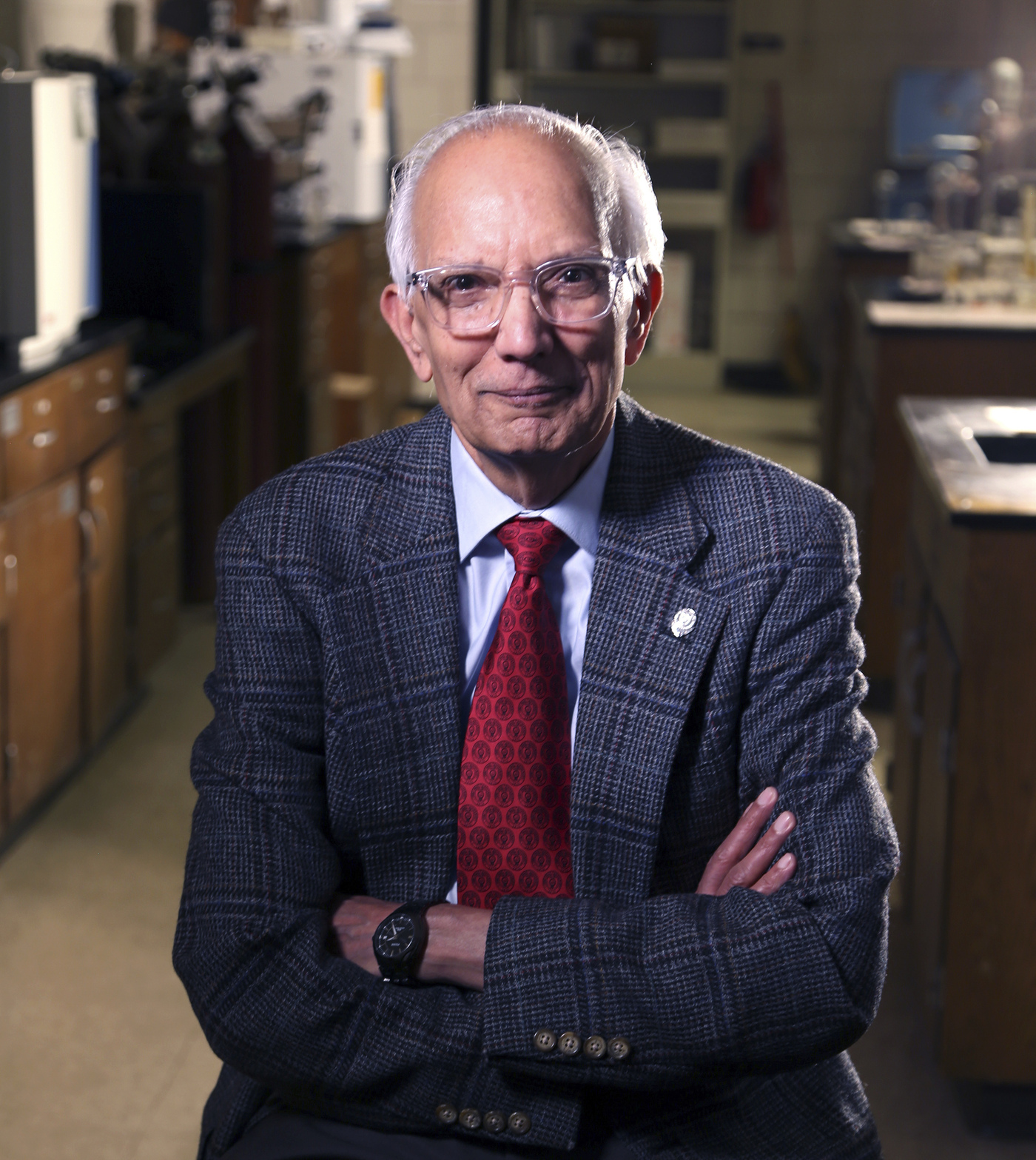 Rattan Lal was awarded the World Food Prize this year. He previously won the Japan Prize.

Lal, now a professor at Ohio State University, is courteous, polite and soft-spoken. But that can be misleading. "I am by nature competitive," he says. "You're either going to be in the top one, two, three, four or you are not going to survive."

It's a lesson from childhood. He grew up poor, in a village in India. He and his family were refugees from present-day Pakistan. His ticket out of poverty was a government stipend — a few dollars each month — to study at university. To earn that money, his grades had to be in the top five in the class, and he was haunted by fear that he'd lose it. "That insecurity never really left me," he says. 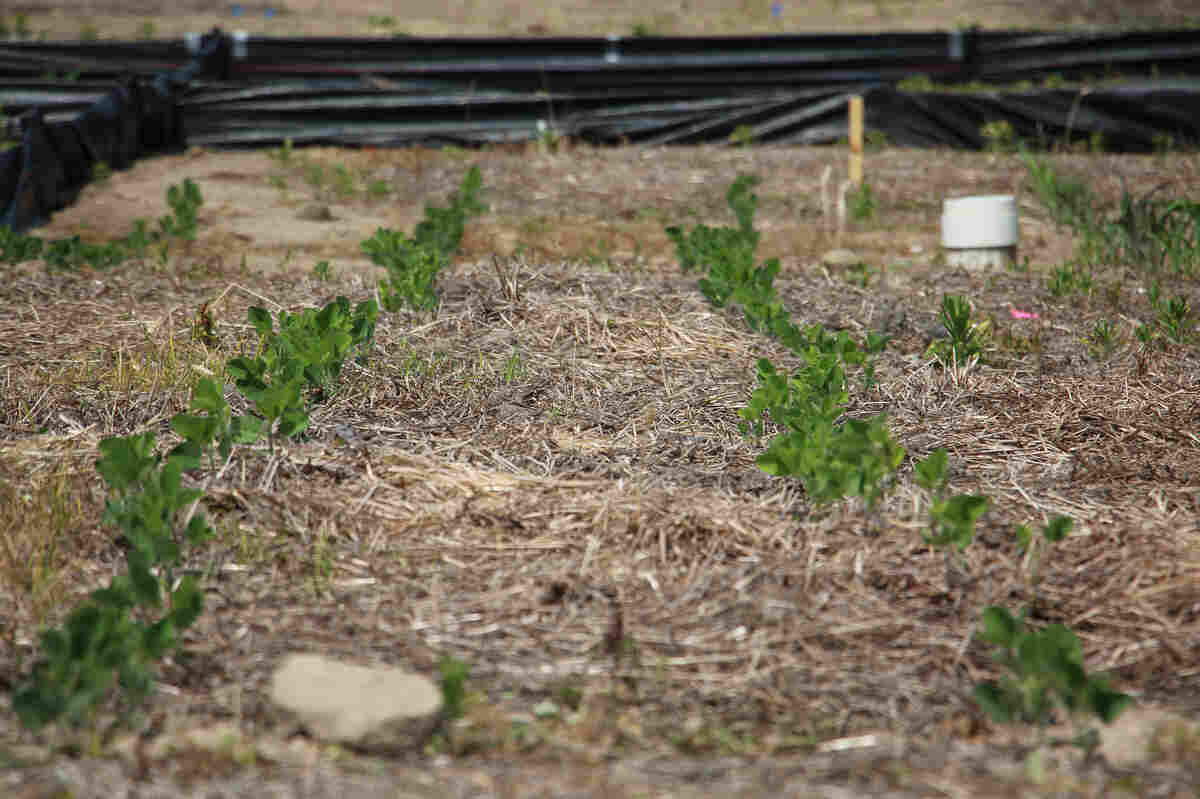 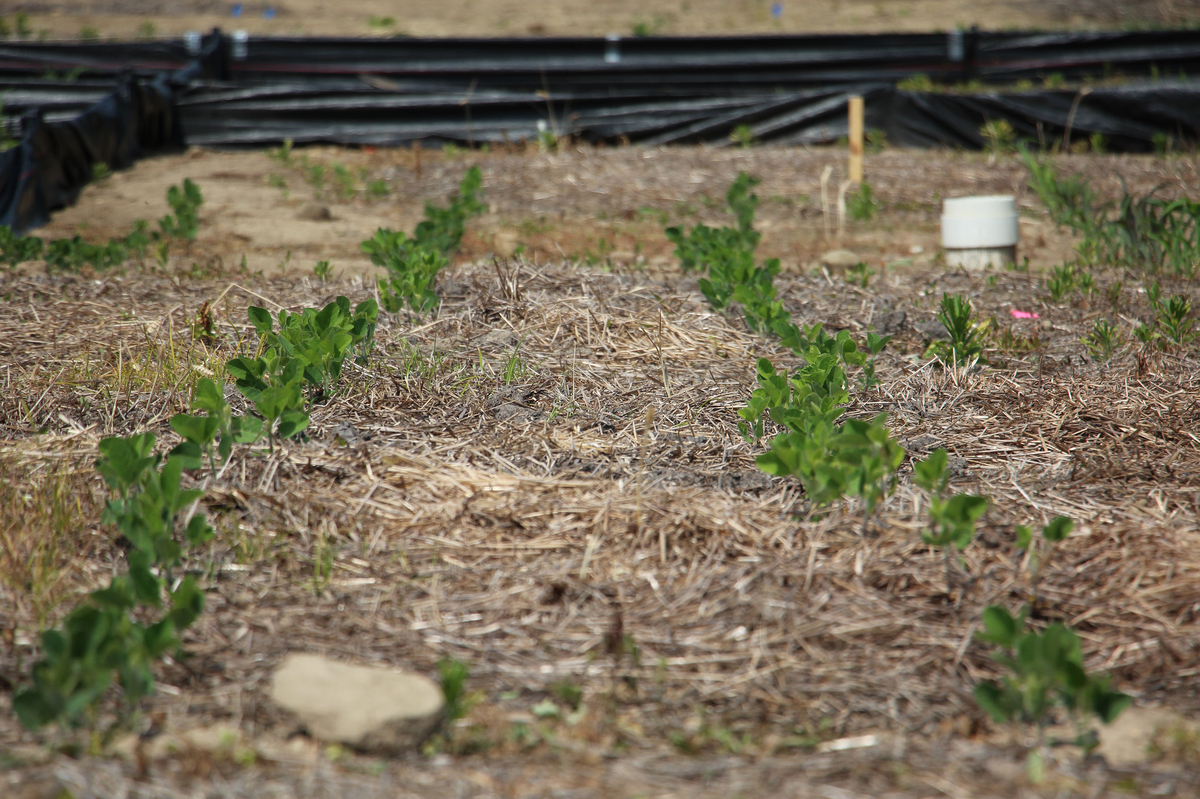 Soybeans growing at Ohio State's Waterman Agricultural and Natural Resources Laboratory. It's part of an experiment aimed at measuring the effects of farming practices on soil quality.

When Lal returned to Ohio State as a professor of soil science in the late 1980s, the insight from that conversation with Revelle became his calling card. He pushed a new view of soil, arguing that it's more than a simply a place where farmers grow crops. It's also a vast global reservoir of carbon that has been a major source of carbon dioxide emissions. Until the mid-20th century, cultivating the soil released more carbon dioxide than burning fossil fuels. Even today, farming and clearing forests for agriculture is responsible for roughly a quarter of global greenhouse emissions.

Farmers control that reservoir; they can continue to mine the soil by tilling it, spilling carbon into the air, or they can refill it, restoring some of the carbon that was previously lost. Soil that's rich in organic matter also is healthier in many other ways. It acts like a sponge, holding water, and it also contains nutrients like nitrogen.

In the American Midwest, for instance, the undisturbed soil of the prairie once was incredibly rich in carbon. Much of it was lost after settlers began plowing it to plant grain. Deforestation and land clearing continues in parts of Latin America and Africa.

Lal began experimenting with farming practices to see how they affect the level of carbon in that reservoir, and he discovered that it's actually possible to refill it at least partially by capturing carbon from the air. Some of those experiments are still ongoing. Nall Moonilall, a Ph.D. student at Ohio State, shows me one of them, an array of square plots at the university's research farm. For the past 30 years, Lal has been monitoring the effects of covering the soil with mulch. Some of the plots have been covered with different amounts of straw mulch every year. Others remained bare. Those bare soil plots now contain less than 1% carbon, but "the carbon content in plots that receive the maximum amount of mulch is probably upwards of 4%," Moonilall says. That's a healthy amount of soil carbon, close to what Midwestern soils contained before they were first plowed.

It also adds up to to tons of carbon in a single acre of soil, simply from adding mulch to the surface each year. Researchers also have found that farmers can enrich soil by leaving it undisturbed. Instead of tilling the soil before planting, which releases stored carbon into the air, farmers can deploy equipment that opens up a narrow slice in the soil and inserts the seeds. Such "no-till" practices have been widely adopted by American farmers in recent decades. Even better, at least from an environmental point of view, farmers can stop growing crops altogether, returning the land to permanent pasture or wetlands. 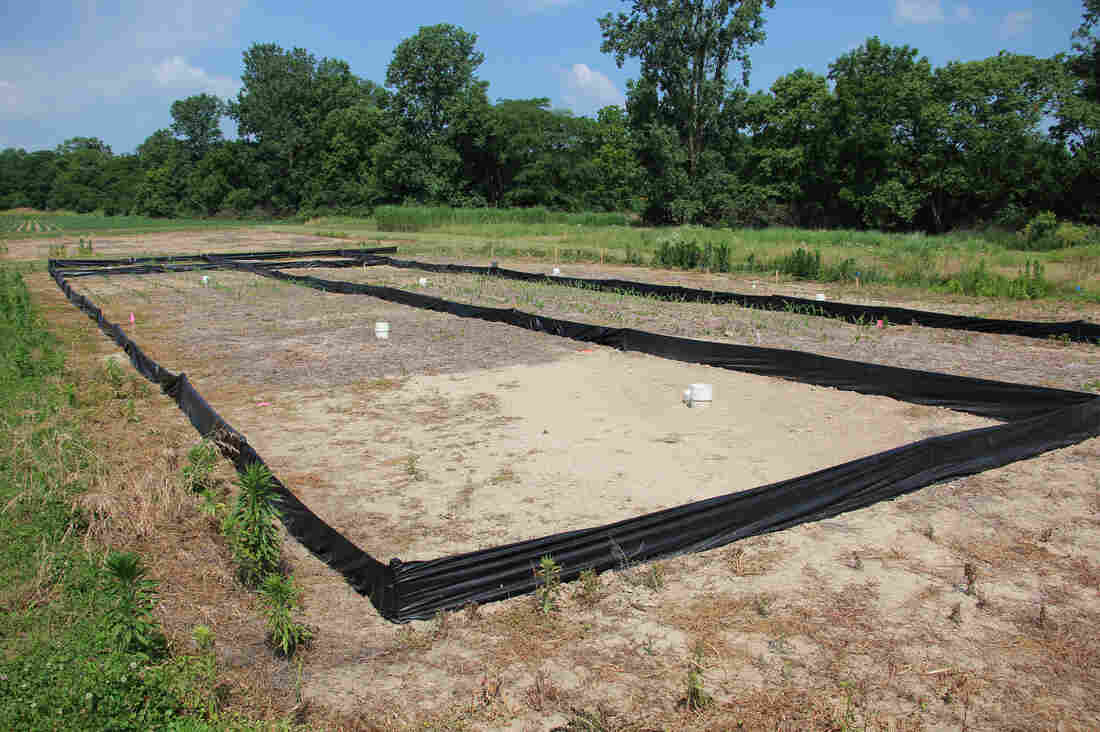 Soon after he returned to Ohio State University in the late 1980s, Rattan Lal laid out these research plots to study the capacity of soil to store carbon. Dan Charles/NPR hide caption 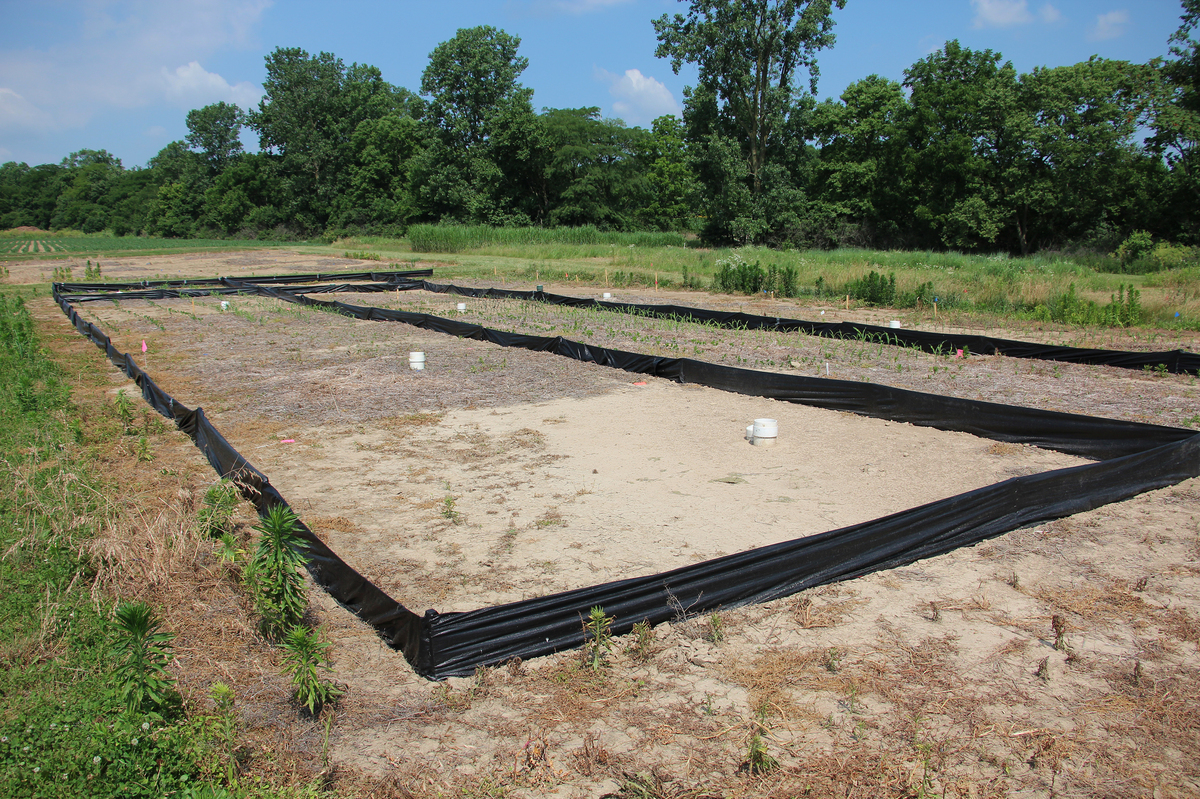 Soon after he returned to Ohio State University in the late 1980s, Rattan Lal laid out these research plots to study the capacity of soil to store carbon.

Lal was not the only scientist exploring this field. In fact, some of his colleagues and rivals in soil science privately criticize him for spreading himself too thin, publishing articles at a ferocious pace yet not always breaking much new ground. Few of them, though, were the equal of Lal when it came to bringing soil to the attention of policymakers and the general public.

Just in the past few years, dirt has turned trendy. Books have appeared, many of them featuring Lal. There's a TED talk about soil health. Agricultural industry giants like General Mills and Bayer are offering to pay farmers to adopt practices that restore carbon to the soil. There's a catchy new name for it: regenerative agriculture. A startup company called Indigo Carbon released a video calling this "the most promising technology we have to address climate change."

Last year, Lal received the Japan Prize, which many consider second only to the Nobel in scientific prestige. In June, he won the World Food Prize, and former Vice President Al Gore and Senator Sherrod Brown, D-Ohio, both called to congratulate him.

There are critics of regenerative agriculture who say the movement has become a fad, promising more than it can possibly deliver. According to the World Resources Institute, no-till farming is unlikely to capture enough carbon to make much of a difference for the climate. And more dramatic changes, such at converting fields back into permanent grasslands, aren't likely to happen on a large scale because there's a growing demand for food, and farmers probably won't stop growing profitable crops.

Lal agrees that rebuilding soil won't stop global warming, but insists that it can make a difference — for carbon emissions and for a variety of other environmental problems, from reducing water pollution and expanding habitat for wildlife. He's mostly happy that soil is finally getting the respect it deserves. He even wants it written into law. The U.S. has a Clean Air Act and a Clean Water Act, he says; there should be a Healthy Soils Act, too.