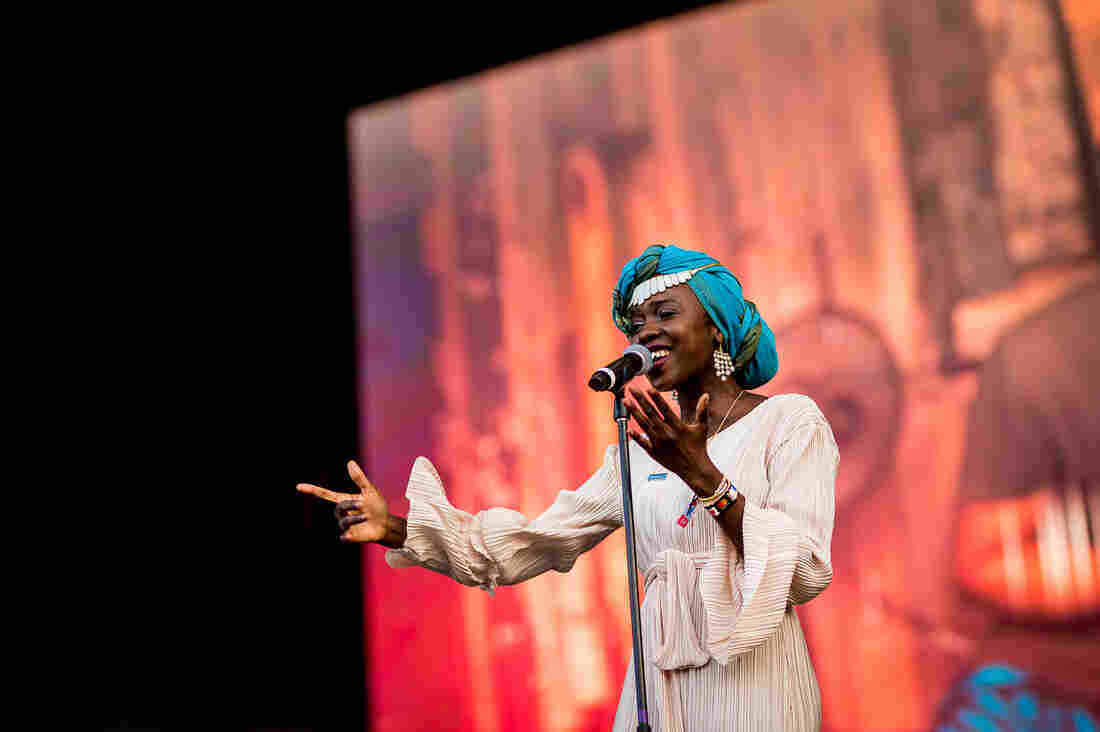 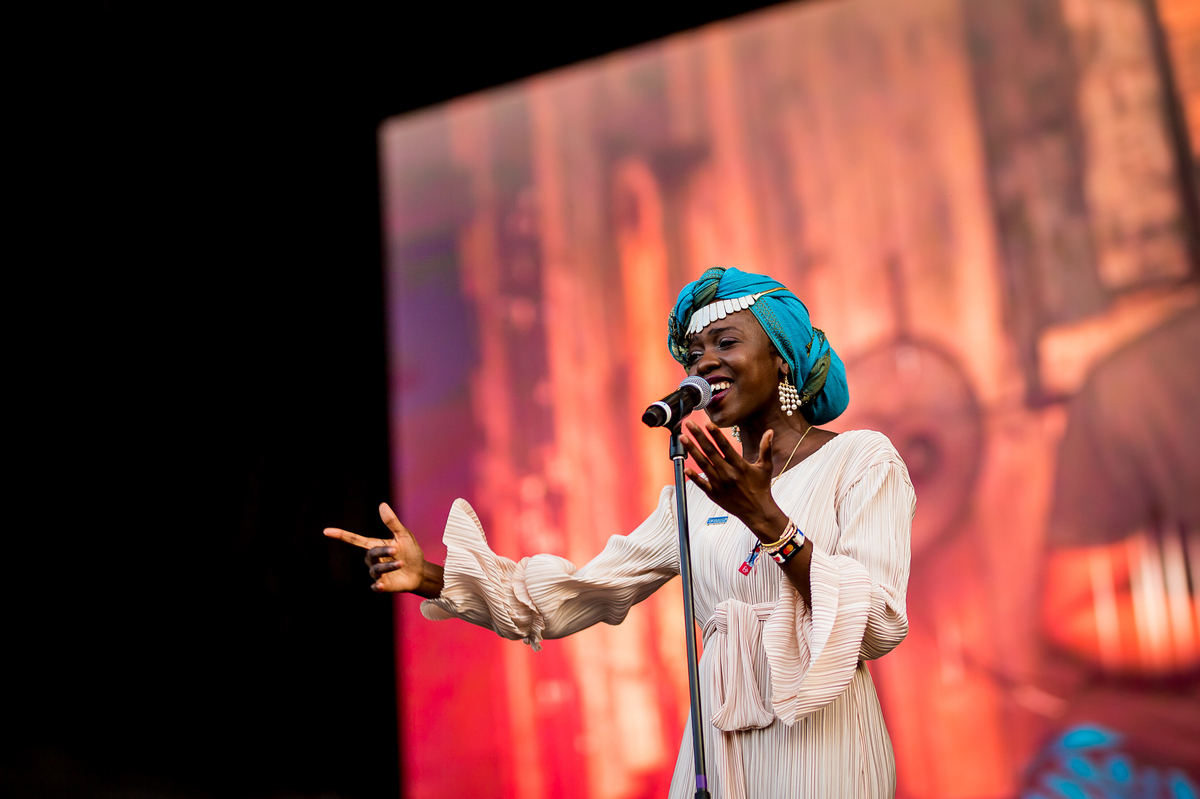 Slam poet and UNHCR Goodwill Ambassador Emi Mahmoud performs at the Sziget Festival in Hungary in 2019.

"Memories of my childhood live/between the rings of sand around my ankles/ and the desert heat in my lungs.

I still believe that nothing washes/worry from tired skin better than the Nile/and my grandma's hands.

Every day I go to school/with the weight of dead neighbors/on my shoulders."

That's an excerpt from "People Like Us," a poem by 26-year-old Emtithal "Emi" Mahmoud, a world champion slam poet known for her vivid language and dedication to uplifting others. As a global goodwill ambassador for the U.N. High Commissioner for Refugees, she's taught poetry workshops in refugee camps from the Middle East to Africa. Over the past several months, Mahmoud, who is based in New Haven, Conn., has been creating poetry about the pandemic and protesting for racial justice while working toward launching her new nonprofit organization, The Women's Table. Named after a sculpture honoring the role of women at her alma mater Yale University, Mahmoud says her new initiative will amplify the voices of marginalized groups.

So what's her next big goal? A career in medicine.

In her slam poet persona, Mahmoud speaks in bursts of energy, almost like she's performing a concerto – her voice speeds up, slows down and emphasizes words that echo through the auditorium. Offstage, she is careful and analytical, with detailed, measured explanations about her thought process. 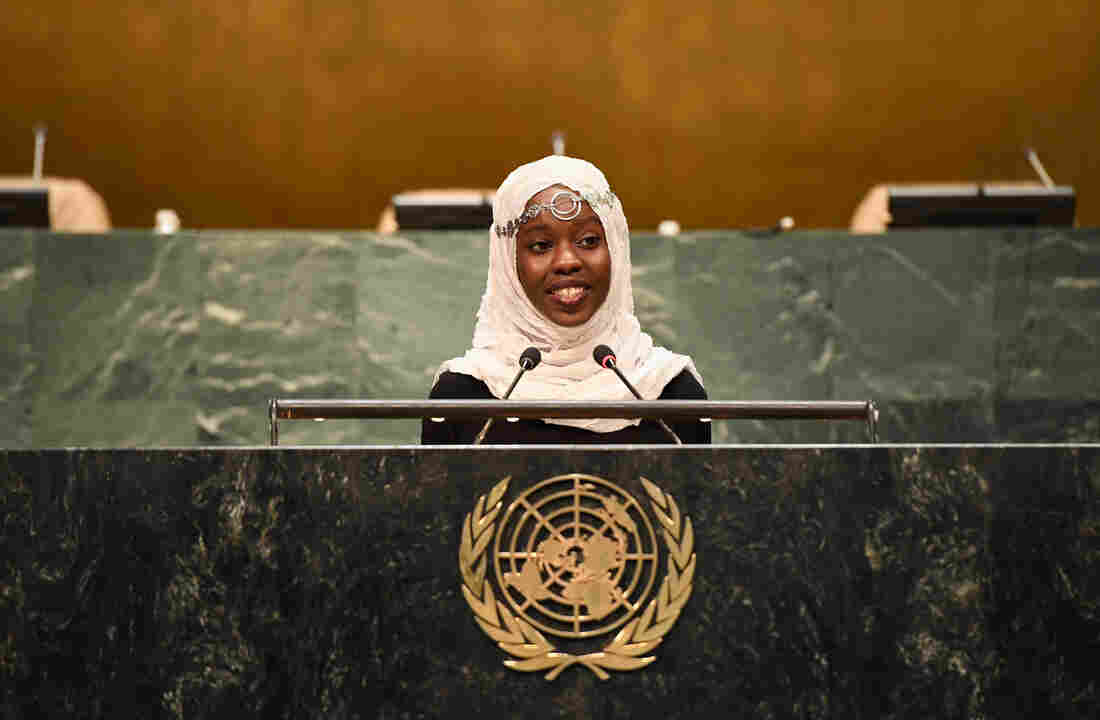 Mahmoud addresses the U.N. General Assembly in 2016 in support of a petition that demanded a better deal for the world's refugees in education, safety and work. Slaven Vlasic/ UNHCR hide caption

"My big passion in life is understanding different kinds of systems and how we break them down, and what they look like at their very core," she says. And one of the most critical systems is health care, adds Mahmoud, who learned that lesson early on from her father, a surgeon in their home country, Sudan. When she was just a baby, government officials tried to convince her father to change the death certificate of a colleague who had been tortured and killed. The officials wanted the document to say he died of malaria. But Mahmoud's father refused, so the Sudanese government sent him away on a medical mission to Yemen — and then fired him.

"When my family found out about it, [they said] you need to get your wife and your daughter out now to safety," says Mahmoud. That's when they decided to flee Sudan in 1994, when she was just a year old.

She spent her early childhood years in Yemen, moving with her family to the United States through the visa lottery when she was 4. Although she grew up in Philadelphia, she also has strong memories of Sudan's terrifying violence, which she witnessed on a family trip at age 7. Protests against the government's shutdown of schools led to attacks on civilians. Mahmoud ended up hiding under a bed with four others during this dangerous time. She says her parents and relatives came home from the protest with blood on them.

In the poem "People Like Us," she wrote: "I remember their laces, scarlet footprints on the floor ... Fear is the coldest thing in the desert, and it burns you – bows you down to half your height and owns you."

Upon returning home to Philadelphia, Mahmoud felt disconnected from her normal life in the U.S. "After I just went through all this trauma, I [had] to start second grade, understanding that, oh, people die for education," she says. "Nobody knew about it except for us ... Nobody else was talking about it."

In school, science was an absolute that helped her make sense of a crazy world. "Science makes me tick because I think very early on, I understood that a lot of things weren't as they seem. Science doesn't lie, you know," she says. Long before becoming interested in following in her parents' footsteps in medicine — her mom is a medical lab technician — Mahmoud was drawn to paleontology. "Nobody's ever seen a dinosaur. But their bones are here. Even as a little kid, I wanted to know their story."

At Yale, she crafted her own path of study, double-majoring in anthropology and molecular, cellular and developmental biology. "People [say] these are two very different things, and I say, 'Yeah, I study people from the inside and people from the outside,'" Mahmoud explains.

After seeing a fellow student perform onstage poetry for the first time, Mahmoud found a new way of sharing her observations.

She began writing poetry to convince people to hear and see her. She infused her spoken word poetry with stories of her family in Sudan, along with her personal experiences in the devastating conflict there. She says performing on stage gave her courage.

Poetry is also a way to carry on her Sudanese heritage. "I come from a place where the history is based on oral tradition, my tribal tongue isn't written, everything is passed down from person to person," Mahmoud says. "That's why that's why I write about it so much. I write about it because I'm terrified of forgetting." 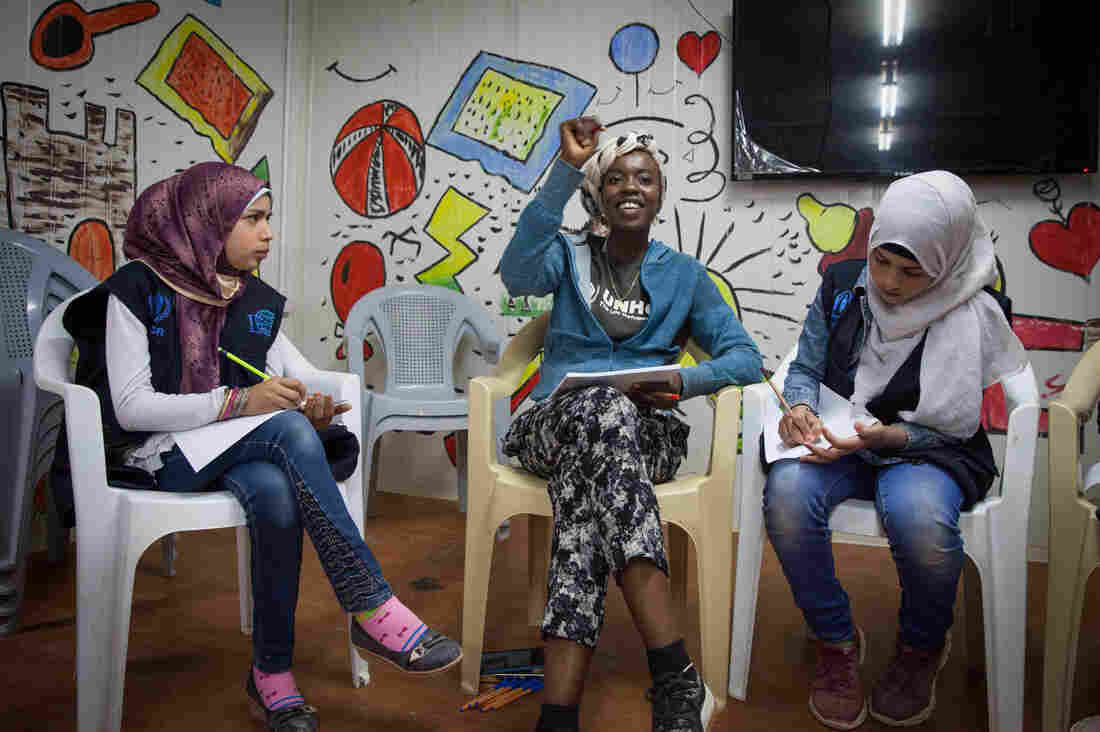 She also does spoken word in her native language, Arabic, including part of the Ramadan poem "How Am I To Celebrate?," about what it's like to celebrate the Muslim holy month as a refugee far from home.

At Yale, she joined the ¡Oye! spoken word group on campus. "They completely transformed my relationship with writing," she says. "After just two months with ¡Oye!, I was in a place where I could actually get a position on the competition team for the whole school," she adds.

Mahmoud credits her quick rise to her coach, professional spoken word artist Alysia Harris, who still remembers the first time she saw Mahmoud perform in a classroom at Yale. "She starts speaking and she's smiling, but delivering the most heart-wrenching and arresting lines of poetry," Harris says, noting she was particularly impressed by Mahmoud's ability to infuse her poetry with humor. "There was always in her work a flirtation with the humorous, or funny, or sarcastic, and then halfway or a third into the poem, she would really flip that on its head." The poem "How to Translate a Joke," for example, starts with a man's joke about picking up girls — and turns into a hard-hitting commentary on the subjugation of women.

In 2015, her senior year of college, Mahmoud almost didn't go to the world poetry slam championship, an annual four-day competition that draws almost a hundred top spoken word artists to a different U.S. city each year. Her grandmother in Sudan had just died. But, "my parents said 'Grandma definitely would have wanted you to be there, you go,'" she says. "I showed up to that competition not thinking that I would get anywhere. So, I came with not enough poems." When she discovered she would be competing in the finals, that's when she wrote "Mama," a poignant ode to the strong matriarchs and women in her family.

On stage, Mahmoud took the audience by storm. "A lot of people didn't expect what came out of her to come out of her," her former coach, Harris, says. "I think people have a lot of stereotypes or a lot of assumptions about just how people carry themselves and who they are, what they're going to sound like, and what they're going to talk about. And I think when Emi walks on the stage, she just obliterates any type of box that you would like to put her in. She's like 'you're going to listen to me because I am going to command your attention."

Mahmoud says she shatters people's pre-conceived notions of her. "I'm a young woman of color, an immigrant, a former refugee, I'm a hijabi, I'm a Muslim," she says. "I change what power looks like."

The success of her piece "Mama" turned Mahmoud into an international public figure. Since then, she's presented at the United Nations, joined White House round-table discussions with President Barack Obama, given TED Talks and spoken to audiences of thousands.

Emi Mahmoud performs her poem "People Like Us" at the United Nations in 2016.

Claire Lewis from the UNHCR Goodwill Ambassador Team has traveled with Mahmoud and describes her strength in reaching audiences of many backgrounds through spoken word poetry. "It's the way she looks straight at you, it gives you shivers. It can make people cry because of her ability to deliver a story," Lewis says. "She conjures up imagery, and that is actually magical and incredibly powerful." She describes the poem "Boy in the Sand," which Mahmoud performed in honor of Alan Kurdi, the child refugee whose body washed up on the sand in Greece.

Although Mahmoud's travel is currently on hold due to the COVID-19 pandemic, she hopes to merge her activism with medicine. She was a Global Health Fellow at Yale and spent a summer in college volunteering in Sudan's refugee camp clinics, including at a birthing hospital. There, she saw up close the difficulties doctors face in a resource-strapped environment.

She plans to keep up her poetry as she pursues a career in medicine in the future. For Mahmoud, it's a way to explain science in elegant ways. "As much as science speaks on its own, the language of science isn't exactly the most inviting language, and that's why poetry comes into the picture," she says. "And that's why art comes into the picture. I can't imagine not spending the rest of my life trying to demystify and unmask all of these systems."

Sonia Narang is a journalist who covers women's rights, climate change and health. Follow her on Instagram @sonianarang. This story was produced in association with the Round Earth Media program of the International Women's Media Foundation.