Accessibility links
Wild Polio Wiped Out In Africa — But Vaccine-Derived Polio Persists : Goats and Soda The Kick Polio Out of Africa Campaign began in 1996. This week, the World Health Organization announced that wild polio has been eradicated — although there is a caveat. 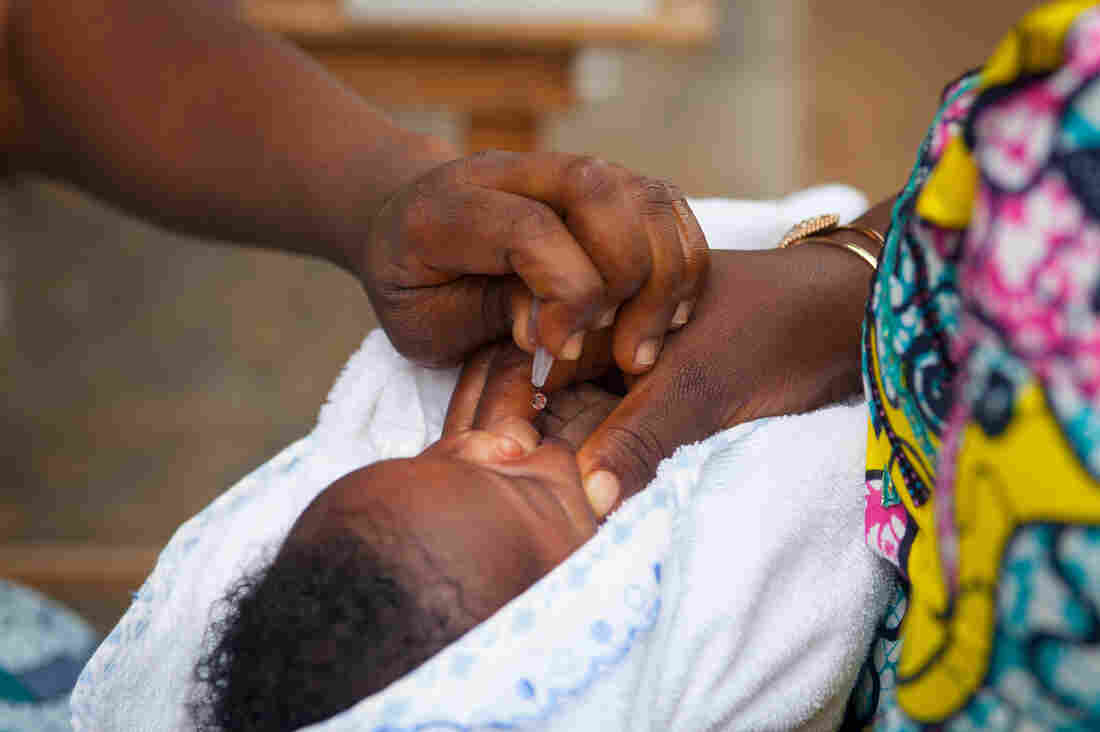 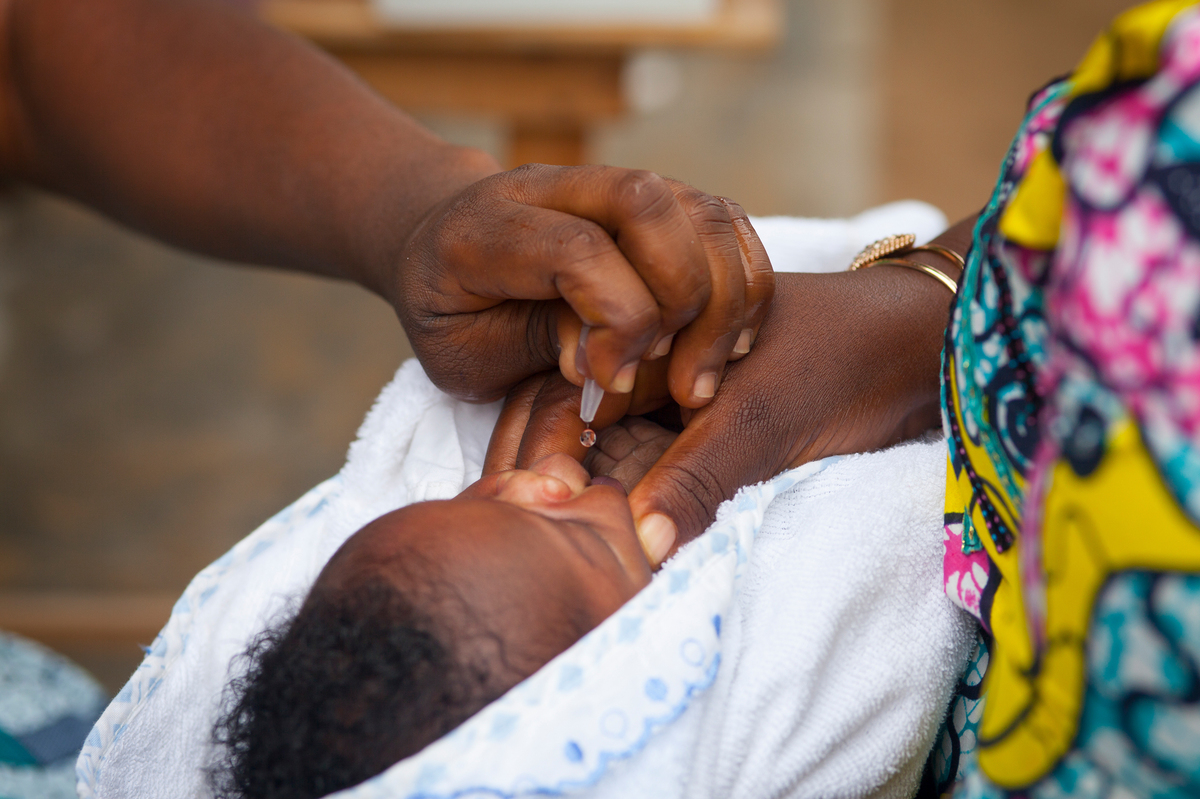 An oral polio vaccine, which contains weakened live virus, is administered in a health enter in Togo. Africa has declared that wild polio has been eradicated, but a relatively small number of cases of vaccine-derived polio persist.

In a historic public health achievement, the 47 nations of the World Health Organization's Africa region were certified to be free of wild poliovirus on Tuesday.

The declaration comes four years after the continent reported its last case of wild poliovirus, in Nigeria, and 24 years after it launched an ambitious eradication campaign.

But the region's fight against polio isn't over — vaccine-derived polio still poses a threat.

The Kick Polio Out of Africa Campaign launched in 1996. At the time, wild poliovirus paralyzed an estimated 75,000 children on the continent each year. Now the continent has not reported a case of wild polio since August 2016, and the Independent Africa Regional Certification Commission says the World Health Organization's Africa region is free of wild polio.

"This is a momentous milestone for Africa. Now future generations of African children can live free of wild polio," said Dr. Matshidiso Moeti, WHO regional director for Africa.

The achievement is the result of Herculean vaccination and surveillance efforts by the international community and health care workers, often working in some of the most dangerous areas of Africa. As Moeti noted, some of those health workers lost their lives "for this noble cause." In Nigeria, they ventured into insurgent territory just after bomb blasts to deliver vaccines to children.

The World Health Organization said the campaign has prevented an estimated 1.8 million cases of paralysis in children and saved about 180,000 lives. Moeti said the eradication is a symbol of what is possible when the world works together. "It is a vivid reminder that vaccines work and that the collective actions of communities, governments and partners can bring about tremendous changes," Moeti said during a celebration held over Zoom.

"The end of wild polio in Africa is a great day," WHO Director-General Tedros Adhanom Ghebreyesus said. "But as we all know, it's not the end of polio."

The wild virus is still present in Pakistan and Afghanistan.

And there's another type of polio that's problematic. Sixteen African nations are battling outbreaks of what's called "vaccine-derived polio." This is a form of polio that stems from the oral polio vaccine used in lower income countries because it is cheap and easy to administer.

The oral vaccine contains a live but weakened version of the polio virus. The virus replicates inside the child's intestine and eventually is excreted. In places with poor sanitation, fecal matter can enter the drinking water supply, and the virus is able to start spreading from person to person. That was once considered a useful feature of the oral vaccine, since it can help unvaccinated children become immune. However, in rare cases in places with poor sanitation and large numbers of unvaccinated children, the attenuated virus can mutate in the wild and regain strength to the point where it can cause paralysis.

In the U.S. and other wealthier nations, children receive a polio vaccine injection that contains inactivated virus.

To combat vaccine-derived polio outbreaks, WHO has been deploying a rapid response team in Africa since last fall.

"It's actually an interesting conundrum. The very tool you are using for [polio] eradication is causing the problem," Raul Andino, a professor of microbiology at the University of California, San Francisco, told NPR in 2017.

Wild polio is the second virus to be eradicated from the African continent; the first was smallpox, which was stamped out 40 years ago.

While WHO and public health officials from across Africa celebrated their landmark achievement against wild poliovirus, they also acknowledged the challenges posed by the current coronavirus pandemic.

Henrietta Fore, executive director of UNICEF, called COVID-19 a "global health emergency that not only threatens people's lives, it threatens to interrupt our work to deliver the polio vaccine and so many other lifesaving interventions in Africa."

Fore and others noted that in some African nations, the same health networks developed to eradicate wild polio are now being used to help support the response to the pandemic. "Together," Fore said, "let's reveal once again the power of African unity to gather people around a common cause."