Accessibility links
China's Coronavirus Lockdown In Xinjiang Is Severe — And Controversial : Goats and Soda Across China, life has largely returned to normal — except in the western region of Xinjiang. Some 22 million people have been under heavy lockdown since July — and they're questioning its severity. 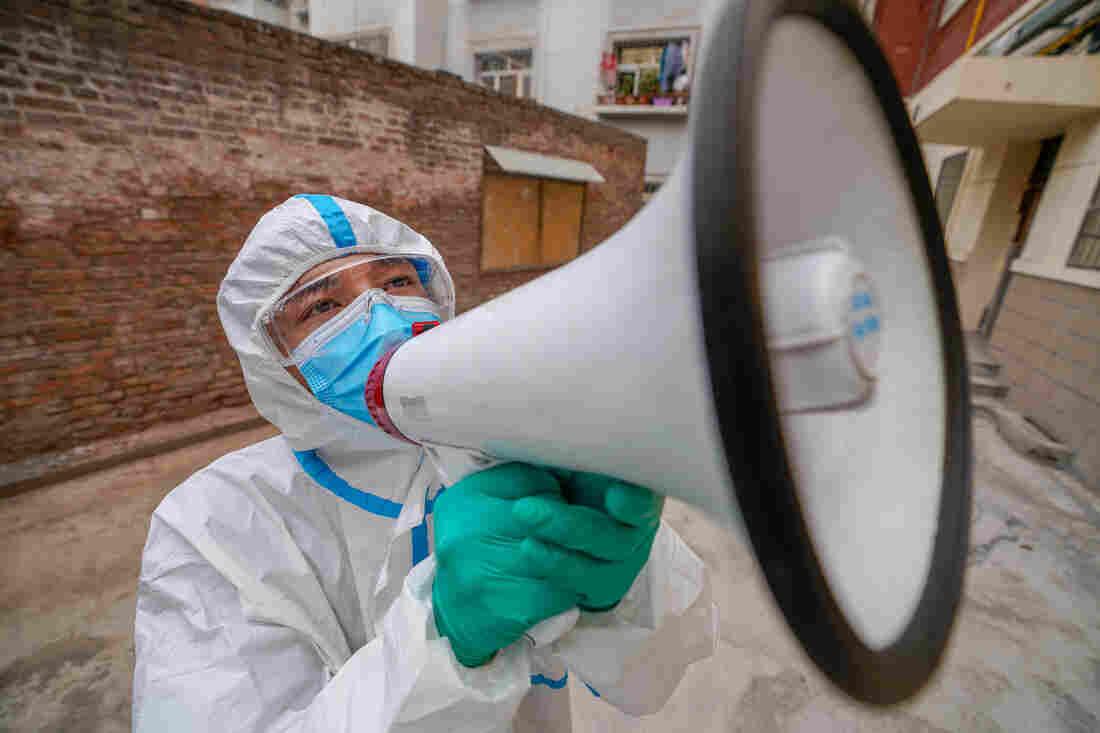 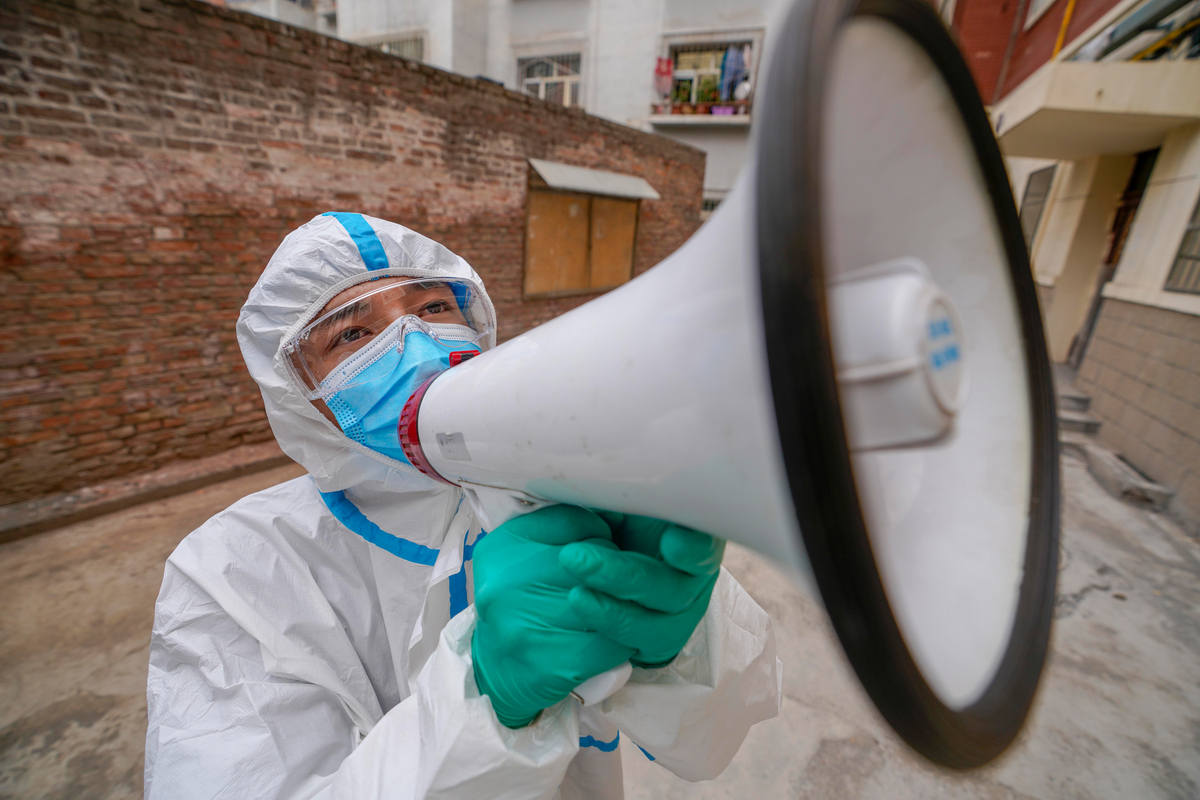 Across China, life has largely returned to normal. Domestic travel is picking back up as a coronavirus pandemic brought under control recedes from memory. Businesses and factories have reopened.

Except in Xinjiang. A sweeping, western region nearly four times the size of California, Xinjiang remains largely cut off from the rest of the country and its some 22 million residents under heavy lockdown, an effort officials say is needed to contain a cluster of more than 800 officially diagnosed cases.

In mid-July, officials declared a "wartime mode" for the region. Community officials continue to go door to door, sealing doors with paper strips, tape and in some cases metal bars, to prevent residents from leaving their homes.

The region has effectively been penned off from the rest of the country, meaning scant information about the lockdown has emerged. In July, Xinjiang's train stations were closed, intercity bus routes canceled, and centralized quarantine imposed on residents returning to the region.

"It has been more than a week since we last had a case, but that does not mean we should relax," said Tang Shan, a Communist Party official who oversees Xinjiang's Ganquanbao district, an industrial zone just outside the region's capital of Urumqi. "We still ask our residents and the society at large, including our government organs, to work together in order to maintain the success we have achieved so far."

The monthlong lockdown has angered residents, thousands of whom took to social media this week to complain about what they said are heavy-handed quarantine and testing policies out of sync with the severity of the outbreak. The region's last new COVID-19 case was diagnosed on Aug. 17.

"The government has used an ax where a scalpel was needed," said a 21-year-old resident of Urumqi, where the vast majority of cases have occurred. He asked to remain anonymous because of potential legal retribution for talking to foreign media. "I just want government officials to refrain from lazy policymaking and combat the outbreak with scientific, reasonable measures."

Xinjiang is home to about 11 million Uighurs, a Turkic ethnic minority. Since 2017, local authorities with backing from the country's leader, Xi Jinping, have extralegally detained or imprisoned hundreds of thousands of Uighurs and other historically Muslim ethnic minorities. Those not detained live under heavy government surveillance and a web of restrictions that forbid most religious activities and travel.

Darren Byler, a researcher at the University of Colorado, Boulder who has written extensively about Xinjiang, notes the region had already adopted particularly intrusive methods to lock down cities during the epidemic's start in January. Under a campaign called a "million police enter ten million homes," a combination of community officials and auxiliary police kept close tabs on each household and ensured that people did not leave their place of shelter.

"In some cases, the orders to shelter in place during the initial lockdown and the current lockdown were delivered with little to no warning, so some people were forced to stay in their place of work apart from their families and without supplies," said Byler.

This past weekend, frustration from Xinjiang residents spilled over to social media, as the hashtag "Xinjiang refugees" briefly began trending on China's Twitter-like platform, Weibo. Most of the posts were soon deleted, and several accounts suspended. Videos shared on the platform by frustrated residents show Xinjiang residents cuffed to window bars and balcony railings outside their homes, a punishment for violating home quarantine rules.

"I want to strongly emphasize to everyone to now open your front door. Those who are discovered [outside their homes] by neighborhood officials will be reported to the nearest police station," read a warning sent to a chat group of residents in Urumqi's Tianshan district, according to screenshots sent to NPR by one of the group's participants.

The policy is similar to strict lockdown policies adopted for weeks at a time in other Chinese cities such as Wuhan and in coastal Zhejiang province during the height of the epidemic. To feed trapped residents, community officials and volunteers rallied to deliver daily essentials to each household several times a week.

With comparatively less-developed community services, residents in Xinjiang said they have been left hungry in their own homes. One woman in Kashgar, a former Silk Road oasis town, said she had been sealed into her house with a random assortment of groceries sent by community officials once a week — usually basic vegetables such as potatoes, carrots and cabbage.

Four Uighur residents told NPR they had also been forced to drink a brown, herbal Chinese traditional medicine packaged by a company called Beijing Donghuayuan Medical. China's state news agency has said asymptomatic cases in Xinjiang were given an "herbal concoction" to prevent symptoms from appearing and that participation in traditional Chinese medicine treatment had "reached one hundred percent" in Xinjiang, though there is no medical evidence proving its efficacy against the virus.

On Monday, the regional government softened its lockdown policy slightly, allowing residents living in compounds with no cases to leave their homes so long as they are wearing a mask.

To further quell public outrage this week, state media also published the mobile phone numbers for about a dozen senior officials and party members at the provincial and city level, encouraging irate residents to reach out directly with recommendations.

"There has been an endless queue of complaints coming in," said Ye Hailong, a county-level Urumqi official.

On Monday, the Xinjiang regional government softened its stance and said it would allow residents without diagnosed cases in their compounds to leave their homes.

But when asked when Xinjiang's "wartime mode" would be entirely lifted, officials declined to offer a specific date. "Our lockdown policies have to follow the timeline of the epidemic and when the epidemic ends," said Chen Xinjian, an Urumqi district official.