Accessibility links
In Pandemic Briefings In South Africa, Sign Language Interpreters Are Stars : Goats and Soda They interpret for South African President Cyril Ramaphosa in his coronavirus briefings. Their expressive signing has made them celebrities — and brought attention to South African Sign Language. 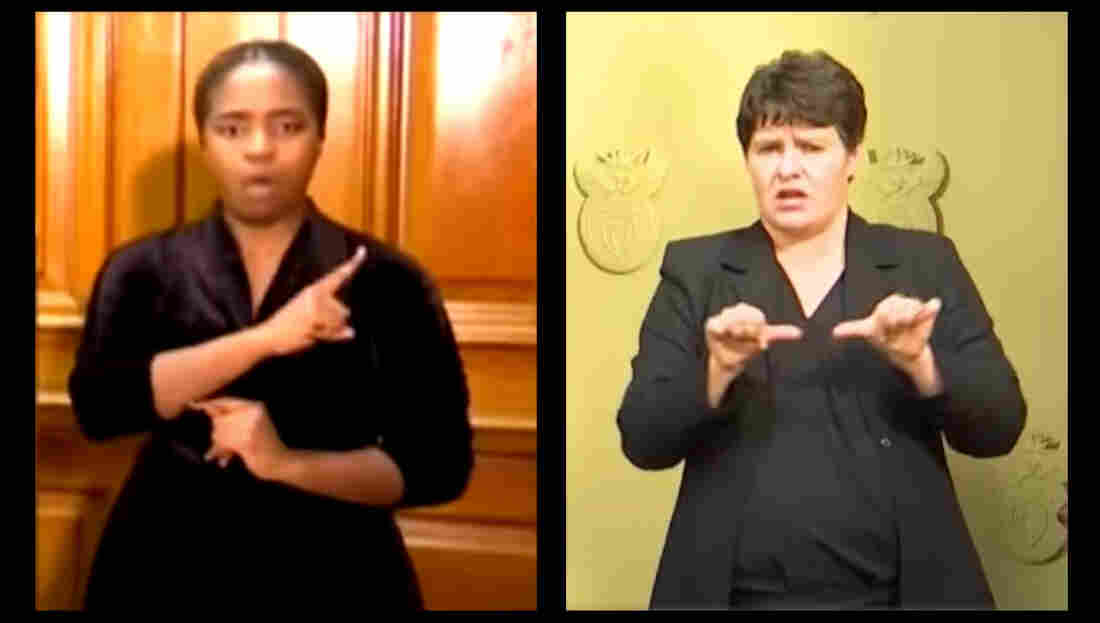 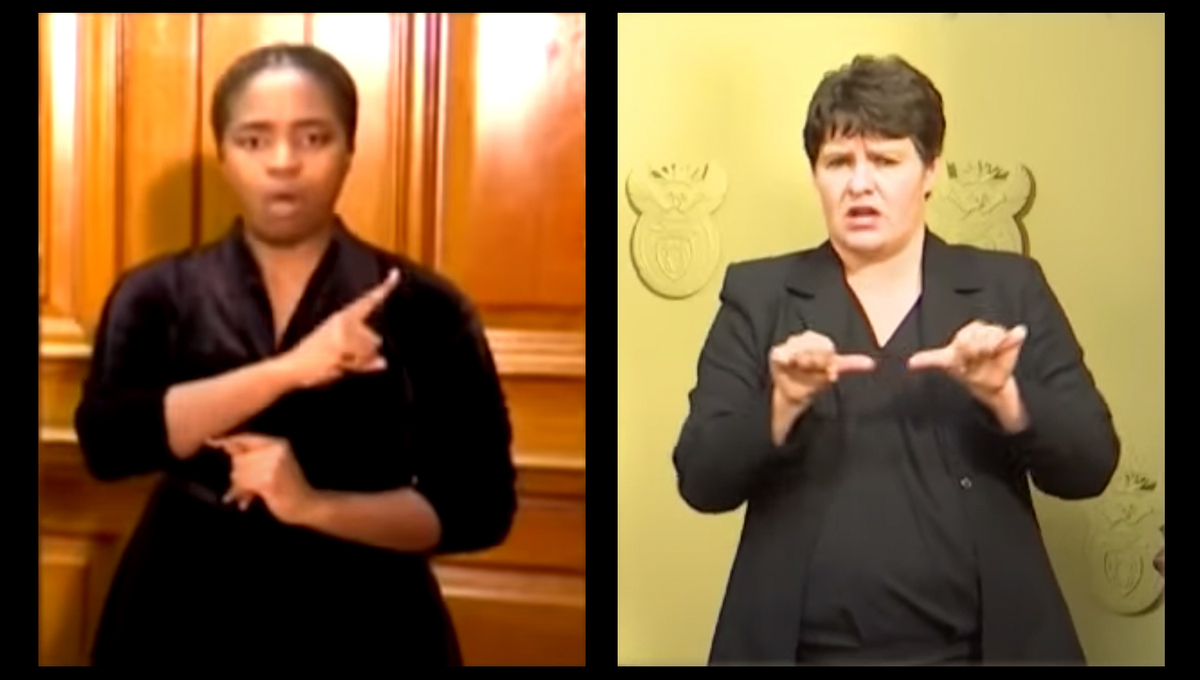 When Andiswa Gebashe was growing up in Soweto in the 1990s, she had two dreams.

Today, improbably, she is both – thought not exactly in the way she imagined.

"When you are up there interpreting, part of the job is to embody the speaker," says Gebashe, who grew up with a deaf father and signed before she ever spoke. "So when I'm on stage with him, I'm not Andiswa. I am actually the president."

And with millions tuning in for the presidential updates on the coronavirus and the country's continuing lockdown, Gebashe and her fellow presidential interpreter Nicoline Du Toit have also become known figures here in their own right – or as one local newspaper put it, "low key celebrities of a very unusual persuasion."

Since March, when the country's coronavirus lockdown began, their signing has been the subject of memes and viral videos, shared among hearing South Africans impressed by the way the natural expressiveness of SASL seems to hold a mirror to the frustration, exhaustion and incredulity that many here felt as the pandemic warped the shape of daily life. In one popular meme, Gebashe was captured in what looked like mid-scream (facial expressions are used in sign languages to convey tone) as the president announced a two-week extension of the country's lockdown in early April.

That attention, in turn, has helped raise the profile of SASL itself – whose users have long advocated for it to be made South Africa's 12th official language.

"The world sees us as disabled, whereas we see ourselves simply as a linguistic minority," says Modiegi Njeyiyana, a deaf academic who studies SASL linguistics at Stellenbosch University. "All this attention on our language creates awareness, and that can only be a good thing."

For Gebashe and Du Toit too, being the stars of memes and music videos, and doing the morning talk show circuit has been fun, but also beside the point.

"I'm happy when hearing people see me signing and become curious about the language, but what this is really about is making sure the deaf community has access to the information they need to survive this pandemic," Du Toit says. "That's why we do it."

As the children of deaf parents – known in the community as CODAS, for "children of deaf adults" – both women know firsthand how deaf South Africans often struggle to access essential information in their own language. Like many deaf South Africans, Du Toit's mother, for instance, doesn't read English, making it nearly impossible for her to use closed captions for TV broadcasts in that language.

Like all of South Africa's languages, the history of SASL is violently intertwined with the history of apartheid – the system of segregation and white supremacy that was the law of the land here from 1948 until the early 1990s. In that system, language and power were inextricably linked. Indeed, the student protest movement of the 1970s, widely credited as the beginning of apartheid's end, began when Black students protested being taught in Afrikaans, the language of the white government.

But for the deaf community, apartheid also coincided with a global movement pushing a teaching method called "oralism," which rejected sign languages in favor of teaching deaf children to read lips and mimic spoken language.

In apartheid South Africa, most white deaf children attended schools where they were told to sit on their hands, and punished if they were caught using sign language with their peers. As a result, many older white deaf South Africans like Du Toit's parents still communicate in a hybrid of signing, lip reading, and spoken language.

By the time apartheid ended in the mid-1990s, oralism had fallen out of favor around the world for suppressing deaf culture's most essential element – its language.

That meant that as one of the first Black students at a formerly all-white deaf school in Johannesburg in the 1990s, Njeyiyana says she saw a strange reversal of South Africa's typical racial hierarchy.

"The white kids were just sponges [as they learned] to sign from the Black children," she says. "Because we had the advantage of being connected to our deaf identity and culture through our language, and many of them did not."

For instance, while there is an organization that accredits SASL interpreters, they are not required to register with it. That sometimes has lead to humiliating errors.

In 2013, at a memorial service for late president Nelson Mandela, an interpreter hired by the government stood beside dignitaries including Barack Obama, making random gestures – the equivalent of gibberish — as they spoke.

"The deaf community is in outrage," wrote Bruno Druchen, national director of the Deaf Federation of South Africa (DeafSA) in a statement at the time. "It is a total mockery of the language."

Since then, SASL advocates say, government has been more cautious about the interpreters it hires, but without a standardized way to vet and accredit them, advocates for the deaf community say low quality interpretation remains an issue.

Both Du Toit and Gebashe say they are aware of their responsibility to provide accurate information for deaf South Africans and frequently spend time catching up on new slang and terminology in the language – which like any other is a living, breathing thing, constantly reshaped by its users.

When the coronavirus pandemic first arrived in South Africa, for instance, the two women consulted deaf community for advice on how to sign words for new terms like coronavirus – a hand fanned out like the virus' spikes against a closed fist – and lockdown – two hands coming together like a door shutting.

Gebashe, whose father is one of South Africa's first deaf stand-up comedians, also keeps up to date by regularly translating theater and music – which many Deaf people enjoy because of its vibrations.

"For too long, our language was cut off from developing by hearing people, and even today, few people realize how much damage was caused by that history," Njeyiyana says. "A language makes you a part of a culture. It gives you access to society. So I really feel now is our time to reclaim what was taken away from us."

Ryan Lenora Brown is a reporter based in Johannesburg, South Africa. She writes frequently about women, migration and pop culture.