Accessibility links
Follow Up: Mongolia's Heavy Metal Hu Blasts Into 'Star Wars' Game : Goats and Soda They're cooking up new music — including a song for a 'Star Wars' video game — and videos on how to prepare traditional foods. Care for a fried meat pie?

In January 2019, NPR reported on a Mongolian heavy metal band whose epic music videos were racking up millions of views on YouTube. Eight months later The Hu released their first album, which blends the screaming guitars of heavy metal and traditional Mongolian guttural singing. We caught up with two band members on a video call to Mongolia, where they have been waiting out the pandemic.

Members of The Hu bring traditional instruments from Mongolia into their heavy metal sound. And they've even gone intergalactic, contributing a song to a new 'Star Wars' video game. Claire Harbage/NPR hide caption

The Hu's first two videos, in which band members sing in a guttural way known as throat singing while throwing heads back and forth reminiscent of the headbanging of '80s heavy metal bands, picked up 7 million views soon after their release in late 2018. The all-male quartet's combination of leather jackets and skull rings alongside intricately carved Mongolian horsehead fiddles inspired enthusiastic comments from both Western and Eastern audiences. The videos now have over 93 million views combined.

Meanwhile, the band has taken things even further – to another universe. In February The Hu released the single "Sugaan Essena" for "Star Wars Jedi: Fallen Order," a video game produced by Disney, Lucasfilm, EA and Respawn Entertainment. The song was created for use in the game and can be heard when players first meet the main character, Cal Kestis.

"That we became part of this [Star Wars] universe is just unbelievable," says lead singer TS. Galbadrakh, who goes by "Gala" and spoke through an interpreter.

While The Hu may not have envisioned performing for distant galaxies, they have always wanted to create music for listeners outside of Mongolia. They chose "hu" as a name because it is the root word for human being in Mongolian and that is who they wanted their audience to be – all human beings. Their goal is to incorporate as much of Mongolia's musical culture as they can into a rock style, the band's producer and songwriter B. Dashdondog, who goes by "Dashka," explained in an earlier interview.

The result is Mongolian folk rock, a genre that combines traditional Mongolian instruments, like a horsehead fiddle (morin khuur), Jew's harp (tumur khuur) and Mongolian guitar (tovshuur), with the pounding bass and drums of rock. The two-stringed horsehead fiddle is not only shaped to resemble a horse with the carving of a horse head and strings and bow made of horsehair, it also can be used to imitate the sound of a herd of horses.

Then there is throat singing, a technique associated with pastoral herders in Central Asia. The singer produces a low constant sort of drone at the same time as a series of higher tones.

The band named their first album, The Gereg, for a diplomatic passport used during the time of Genghis Khan. The legendary Mongol leader is also mentioned in a line about how he was fated to bring nations together in their first song "Yuve Yuve Yu" (What's going on?). It was the video for that song – with its dramatic scenes of Mongolian nature – and a second song, "Wolf Totem" – which starred a Mongolian motorcycle gang – that originally attracted viewers. While the imagery and instruments might seem foreign to those outside of Mongolia, the throbbing rock beat is not. 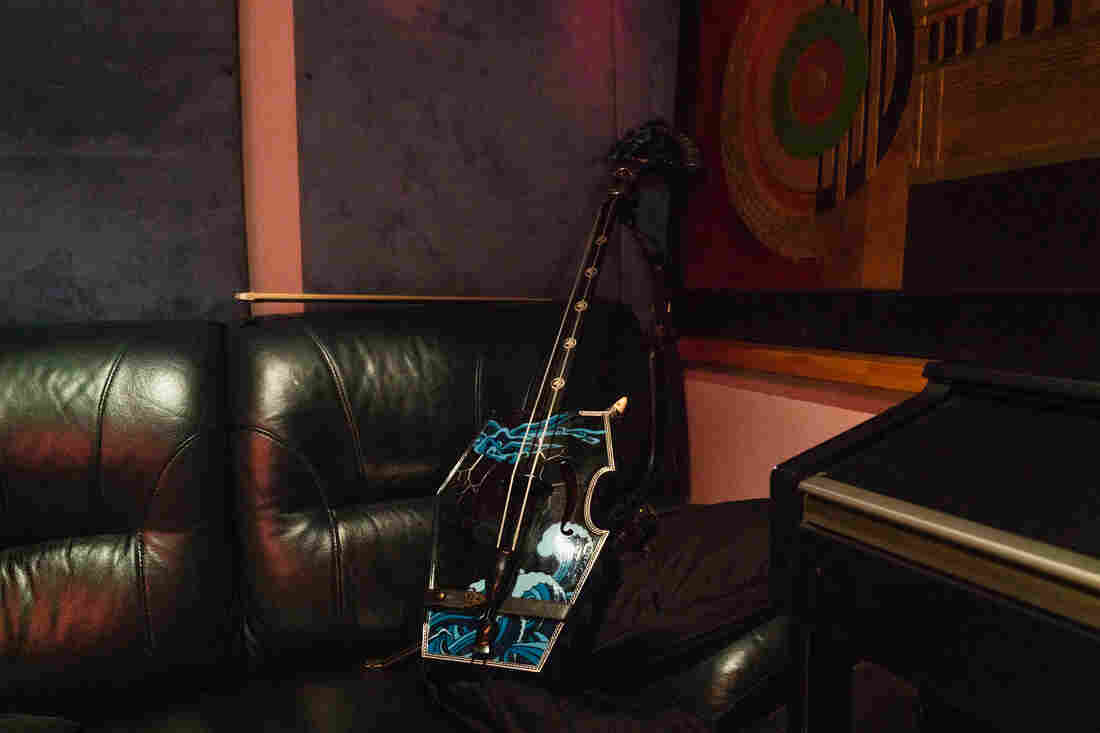 This unique cultural combination of Eastern and Western began appearing during Mongolia's transition from a satellite of the Soviet Union to a democracy late last century. In recent years it has proved popular with an international audience. Folk metal band Tengger Cavalry played at Carnegie Hall and the music of Altan Urag was featured in the 2007 film Mongol and in the Netflix show Marco Polo. The Hu are now topping billboard charts. In April 2019 "Wolf Totem" reached number one on Billboard's Hard Rock chart according to Billboard.com.

Nick Laviers, the audio director at Respawn who invited the band to perform for the Star Wars video, was among those who heard it.

"The music had otherworldly-sounding vocals and unfamiliar ethnic instruments that could be alien, all on top of a classic-rock backbone," Laviers wrote in an email.

The combination was perfect for Star Wars. In "Sugaan Essena" the band sings in a unique "Star Wars Hu language" they invented. The Hu, wrote Laviers, "put together a track that really hit the mark on everything we were looking for." Since its debut in February the song's music video has collected more than 7.7 million YouTube views.

Gala believes the band's appeal comes from their message: "The importance of being together and protecting nature and respecting each other is something we need in this world. That is why this message is received widely, because everybody wants it."

Nevertheless, even Gala is sometimes surprised by how much the band is loved. On Facebook fans post pictures of tattoos they have gotten; at least one showcases Gala's face.

"It's unbelievable," says Gala. "When you see your own face on somebody."

Like his bandmates, Gala, who is 30, trained on traditional Mongolian instruments at the Mongolian State Conservatory. Also like his bandmates he favors black t-shirts, tattoos and long hair. Yet The Hu's fanbase is not limited to a particular type of person, says Jaya, who in addition to throat singing plays the jaw (or Jew's) harp, tsuur (a Mongolian flute without a mouthpiece) and flute. Through an interpreter Jaya describes a scene at a sold-out concert at Le Trianon theater in Paris in February of this year when the audience began chanting with the band.

"So many different types of people, who don't even understand the language," he says. "But together at this moment enjoying the music and being together as a family of human beings."

Performing on stage that night the band felt as if they had achieved something greater than themselves.

"We always wanted to unite people, we felt like we were just doing it," says Jaya, who at 37 is the band's oldest member.

There has been some controversy. Early on there were negative comments about how a symbol on the band's instruments and rings resembled a swastika. In a Facebook message the band explained that the swastika shape has been a sacred symbol in their culture for thousands of years, but out of respect for their fans they would stop displaying it.

The pandemic has raised other complaints. Some in Mongolia say that the Mongolian government favors the band, flying them home from an international tour while Mongolians abroad remained stranded after Mongolia closed its borders. Jaya says they did not receive special treatment and waited 45 days in Australia before being flown back to Mongolia.

Further complaints came when the band's COVID-19 fundraiser for the government's emergency office was scheduled one day before parliamentary elections, a legal non-campaign day for all parties. Gala says the band had no political intention. They ended up changing the date, he says, and raising 55 million tugrik ($19,292) for first responders when the concert aired on national television.

With their world tour cut short by the pandemic, The Hu have been focusing on a second album, which they plan to release next year. They have also been filming more episodes of their YouTube cooking show "Hu's in the Kitchen." Tuga the tour manager came up with the idea for the show while the band was playing in Detroit. Their 14th episode, which came out in late July, has more than 66,000 views. While earlier episodes feature a variety of foods, later episodes focus on Mongolian fare.

In the most recent episode, they make huushuur, Mongolian fried meat pies – and joke around.

"It's not easy to make dough for eight men," says Jaya, repeating a sentiment another member expressed in an earlier episode. (On tour the band includes four additional members.)

On the video as he fries the pies Jaya explains that huushuur is associated with summer in Mongolia along with Naadam, a summer festival that includes wrestling, archery and horse racing. Now that The Hu are back in Ulaanbaatar, they plan to cook more exotic Mongolian dishes. Jaya won't reveal what is on the menu next, but there are plenty of unusual meals to choose from, including marmot barbecue.

Katya Cengel has written for the New York Times Magazine and the Wall Street Journal, among other publications, and is the author of three nonfiction books. Her most recent book, From Chernobyl with Love: Reporting from the Ruins of the Soviet Union was awarded an Independent Publisher Book Award and a Foreword INDIES.