Accessibility links
Indonesian Officials Throw A Coffin Parade To Encourage Pandemic Protocols : Goats and Soda City officials in Jakarta, Indonesia, created the life-size coffins — complete with dummies inside — to encourage people to take the pandemic seriously. It didn't quite have the intended effect. 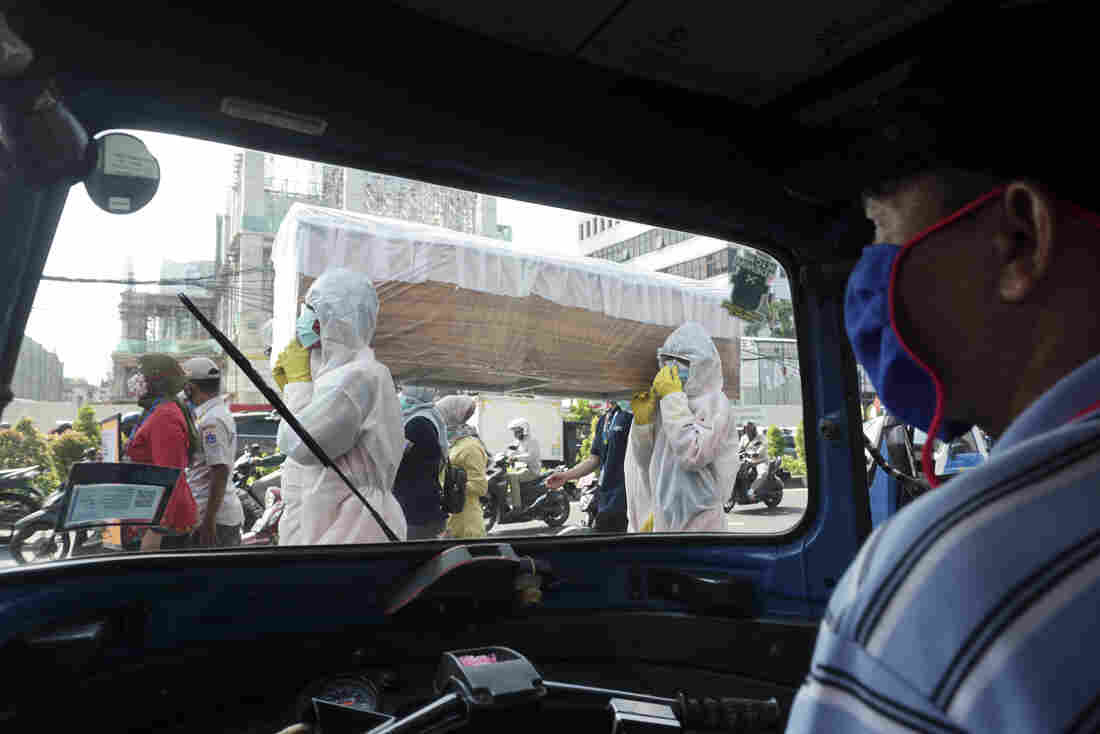 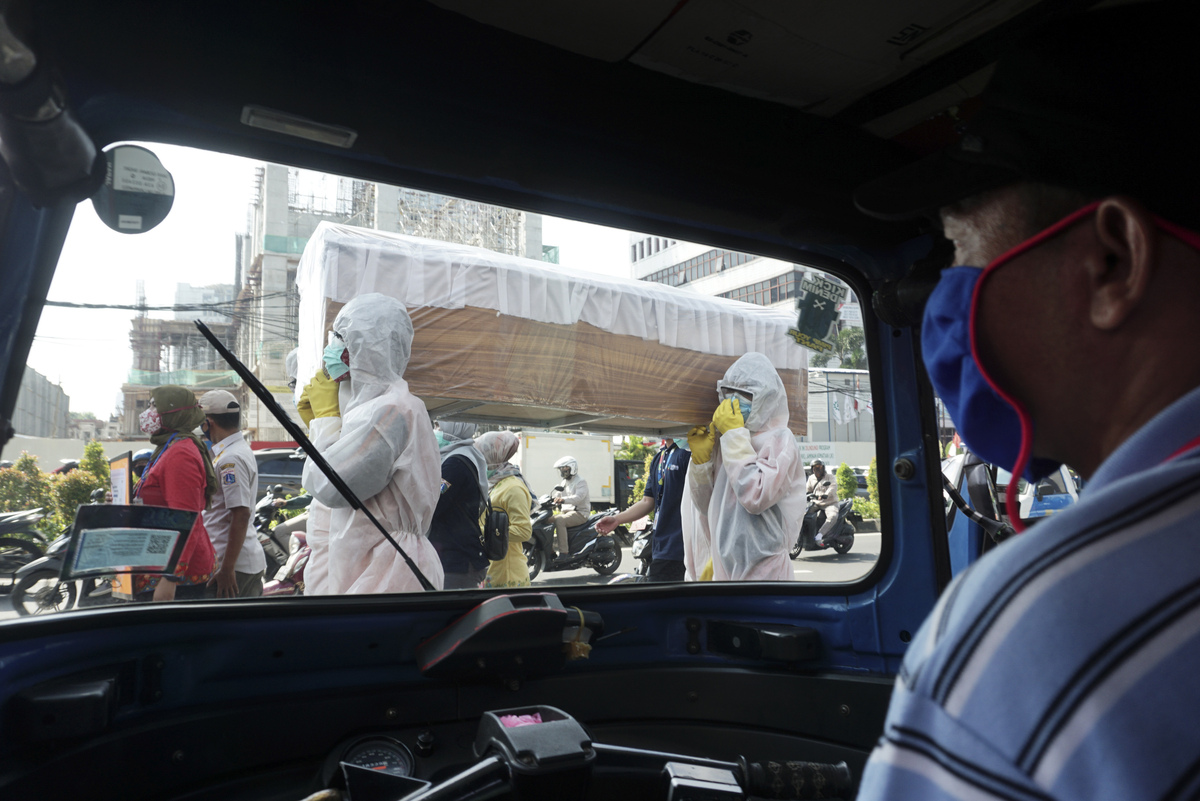 Officials from the Cilandak Subdistrict Office and Police Department carry a coffin in the streets of Jakarta, Indonesia, as part of a campaign to scare people into following pandemic guidelines.

In one of the more macabre attempts at public health messaging, Indonesian officials had an idea: What if they build coffins, put dummies wearing masks inside them — then display them around the capital city of Jakarta?

They hoped it would scare people into following the pandemic rules so they wouldn't end up ... in a coffin.

And like many an outrageous idea, it turned out to be controversial.

On Sept. 1, Jakarta officials, wearing full hazmat suits, paraded the coffins through busy streets before displaying them in strategic locations in the city's 267 subdistricts.

Jakarta Governor Anies Baswedan hopes the effort comes across to the public as a warning. "I hope the public would stay on alert and always practice the social distancing guidelines, wear masks and wash hands," he said to Indonesian newspaper Republika.

The idea for the coffin campaign came from the governor, says Cipedak subdistrict head in South Jakarta, Saidih, who goes by one name.

While the campaign wasn't a mandatory directive, Saidih thought it was a good idea. "We wanted to participate to warn the public," he says. "All the subdistricts are taking part. We see that many people have underestimated the virus so it's a good reminder. You want to be healthy or be inside a coffin, that's the choice."

There was no official instruction from the governor's office on how to build the coffins and dummies, says Saidih, but some city officials shared ideas by word of mouth. The coffin that his team created was made from scrap wood painted white.

"With the help from local residents, we made it from planks scattered around us. There is no budget allocation," he says. Saidih said his office staff members marched almost a half mile before putting the coffin in front of a busy traditional market on Sept. 1.

Each coffin display is a little different. Some have a life-size figure made of fabric or plastic resembling a pocong, a Bahasa Indonesia word referring to one of the country's scariest ghosts, which is wrapped in white cloth as is customary in Muslim burial tradition. Other coffins contain a mannequin wearing a mask. The memento moris were placed alongside banners that showed monthly case numbers in each subdistrict and a sign that read "Coffin of COVID-19 Victim. You Can Choose: Follow Health Protocols or Burial Protocols."

The campaign quickly backfired. Netizens took to social media and criticized the move as inappropriate and a waste of money, asserting that the government has failed to provide decent social assistance for the poor. The Jakarta administration provides social assistance consisting of IDR 600,000 ($40) in cash and staple foods, such a small sack of rice, biscuits and two canned sardines per month. According to a survey of 1,230 people across Indonesia, conducted by the Indonesian political consulting group Cyrus Network, many respondents deemed this as insufficient.

In addition, there have been reports of problems in distributing social assistance to residents. For these reasons, Andina Dwifatma, a public communication expert at Atma Jaya Catholic University Jakarta, says the coffin campaign is a "useless theatrical form."

Others question the effectiveness of the campaign at a time when the government has rolled back some of the initial lockdowns. "The government refused to quarantine heavily affected areas citing economic downturn, and now they want the public to follow orders," says Dr. Mahesa Paranadipa Maikel of the Indonesian Doctors Association.

"I think the government should use more persuasive ways and provide a sense of security for the public," Maikel adds.

As infection numbers continue to surge, Indonesians are growing frustrated by the government's inept messaging. "It's inappropriate shock therapy," says Muhammad Syafi'i, a 45-year-old taxi driver. "There's no point in scaring people with a coffin and ghostlike figure when the government themselves cannot uphold" its guidance for people to wash hands, wear masks and stay socially distant.

"You can often see gatherings of more than 10 people in public spaces without following health protocols," adds Syafi'i.

Another South Jakarta resident, Rananda Tamrin, says that the government should employ another strategy rather than engage in what she described as "fear mongering."

"It scared the hell out of me," says Tamrin, a 25-year-old associate producer with a local TV station. "I was shocked when I saw the pocong the first time. I almost jumped from my motorbike. But then what? After that people wouldn't even care looking at those [coffins]."

Municipal police personnel are now frequently patrolling public spaces. People who violate the social restriction orders – such as not wearing masks — are fined up to IDR 500,000 ($33.80) or must do 2 hours of community service.

And on Sept. 1, the government imposed a more ghostly punishment: actually putting violators inside the coffin displays for five minutes. It was what authorities said was a "chance to reflect on their mistakes," reported Media Indonesia. That form of punishment was widely criticized and was revoked three days later.

Adi Renaldi is a freelance journalist based in Jakarta and previously a staff writer with VICE.