Accessibility links
Woodward Book Revelations Point Up Inaccuracy Of Trump's Charges Against WHO : Goats and Soda Revelations in Rage lead global health specialists to charge that Trump is scapegoating the World Health Organization. 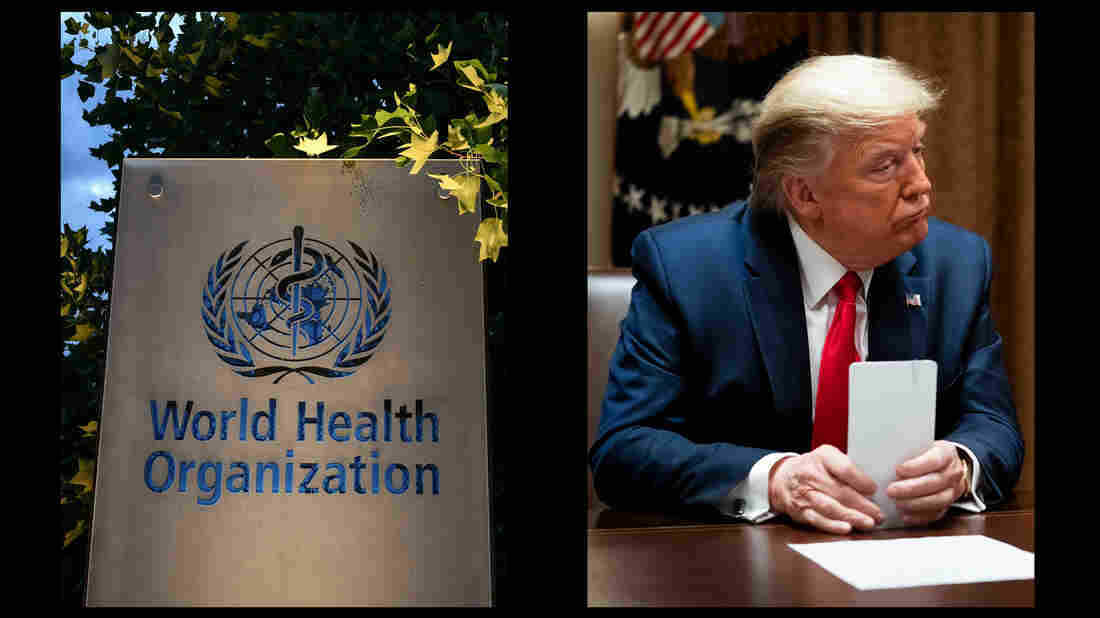 In interviews with Bob Woodward in February and March, President Trump said he recognized the severity of the coronavirus — even though he publicly criticized the World Health Organization for not alerting him to the degree of threat. Fabrice Coffrini/AFP via Getty Images; Doug Mills/The New York Times via Getty Images hide caption 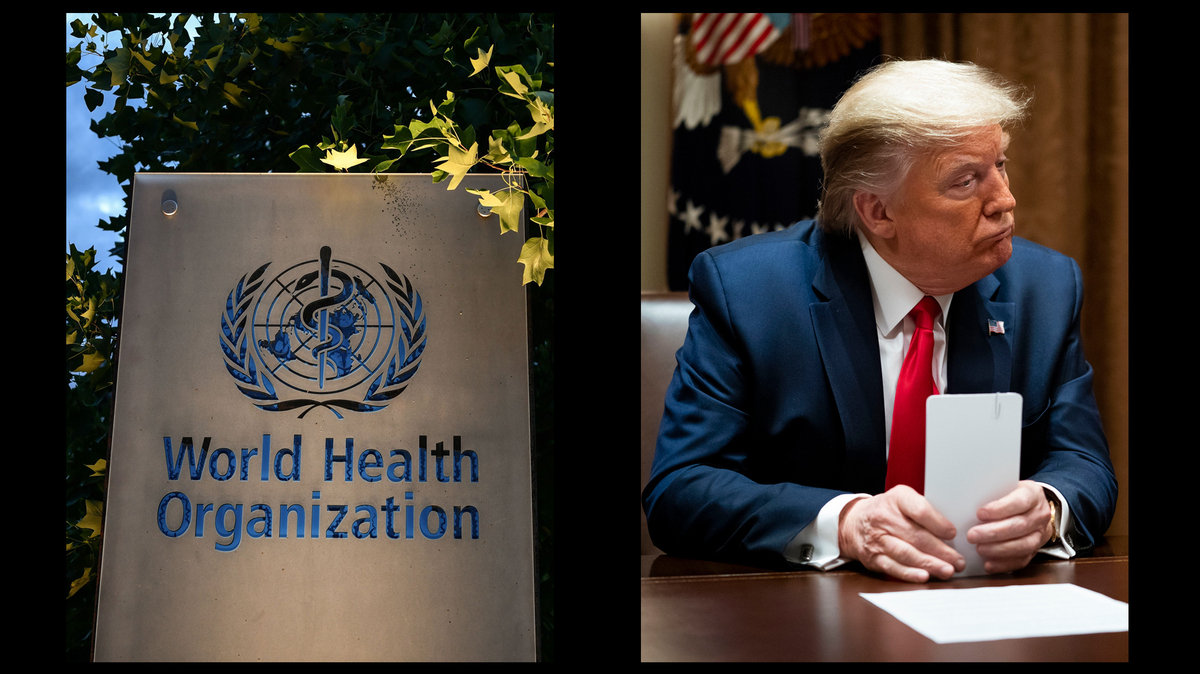 In interviews with Bob Woodward in February and March, President Trump said he recognized the severity of the coronavirus — even though he publicly criticized the World Health Organization for not alerting him to the degree of threat.

President Trump has publicly blamed the World Health Organization for being slow to sound alarm bells about the coronavirus.

"On March 3, 2020, the World Health Organization cited official Chinese data to downplay the very serious risk of asymptomatic spread, telling the world that 'COVID- 19 does not transmit as efficiently as influenza,' " Trump wrote in a May 18 letter addressed to WHO leadership. "It is now clear that China's assertions, repeated to the world by the World Health Organization, were wildly inaccurate."

"Many lives could have been saved" had WHO warned the world earlier, Trump wrote. Later that month, he announced that the U.S. would withdraw from the global health agency.

Now, taped conversations between the president and journalist Bob Woodward, as reported in the forthcoming book Rage, indicate that in early February, Trump was well aware of the dangers of the coronavirus and chose to downplay the public health threat to Americans.

"This is deadly stuff," Trump told Woodward in a Feb. 7 conversation. "You just breathe the air and that's how it's passed. And so that's a very tricky one. That's a very delicate one. It's also more deadly than even your strenuous flu."

For public health expert Jeremy Konyndyk, the conversations clearly demonstrate that the president has been scapegoating WHO for failures of his administration. "These tapes make clear that the very things that the president was accusing WHO of failing to share, specifically the lethality and the transmissibility of this virus, were things he was already well aware of," said Konyndyk, a senior policy fellow at the Center for Global Development who led the U.S. response to international disasters in the Obama administration.

"To blame it on the WHO and then pull out technical and financial support is absurd," said Nancy Cox, who retired in 2014 as director of the Influenza Division at the Centers for Disease Control and Prevention, where she also headed up a WHO collaborating center on flu control.

The Woodward interviews underscore the fact that, despite Trump's assignment of blame, the U.S. did not rely on information from WHO or official Chinese sources to make decisions around its pandemic response, said Jimmy Kolker, a former U.S. ambassador who served as assistant secretary for global affairs at the U.S. Department of Health and Human Services.

"We had our own people on the ground in China, who were observing the situation in Wuhan and throughout [China]," he said, "We had plenty of information which should have given us grounds to take more dramatic action in the U.S. earlier."

Trump told Woodward in a subsequent interview in March that he was downplaying the virus's severity to avoid panic — a point he reiterated at a news conference Thursday. "I don't want to jump up and down and start screaming, 'Death! Death!' " the president said.

But public health experts said the president's attempts to reassure the public have had the opposite effect. "If you want the public to remain reasonably calm, if you want them not to be confused and uncertain, you tell them the truth," said Lawrence Gostin, head of the O'Neill Institute for National and Global Health Law at Georgetown University and director of a WHO collaborating center on global health law.

Gostin believes that public trust is gained when "you level with the American population" and tell what's known about a situation, what's still unclear and when and how the uncertainties will be resolved. Instead, when "the World Health Organization said it was serious and Trump downplayed it — that's a recipe for fear and panic," he said.

The president's strategy of misrepresenting the threat set the tone for administration officials further down the chain of command, Konyndyk said. "There were a lot of people within the administration who recognized the true nature of this risk, who were advising the president on it, but did not mirror that publicly," he said. "Had the president set a different tone at the top, I think we would be in a very different place today."

Konyndyk theorizes that if Trump had been forthright, administration officials could have publicly acknowledged the severity of the situation and effectively promoted science-based measures to prevent disease spread.

The president blamed WHO for the way the pandemic has unfolded because it's a "soft target," Konyndyk said. "It's easier to attack [WHO] than to attack China [directly] — they can't really push back. They make for a convenient scapegoat for the president."

As for the president's decision to end the U.S. relationship with the global health agency, public health specialists interviewed for this story said it's a dangerous move that risks prolonging the pandemic.

"The rest of the world is at a disadvantage if [the U.S. and WHO,] two main sources of public health information and expertise, are not working together," which could delay work on vaccines, treatments and potential cures for COVID-19, Kolker said.

Gostin said that turning WHO into a political football in the geopolitical struggle between China and the United States has been "hugely distracting" to the agency: "I think, [it has] made them less effective than they otherwise would be."

At a press conference Thursday, WHO Director-General Tedros Adhanom Ghebreyesus declined to comment on the revelations from Woodward's book.

Beyond this pandemic, withdrawing U.S. expertise and funding from WHO has "so many real-world consequences" to both WHO and the U.S., Cox said. It interrupts years of work on suppressing infectious diseases such as polio and measles, she said: "If these diseases aren't eradicated, if they continue to spread, there will be [re]introduction of these diseases into the U.S. population."

What's more, if the U.S. stops participating in WHO's global disease surveillance networks, "we're behind the curve in terms of being prepared for the next influenza pandemic or pandemic of whatever disease emerges next," Cox said.

November's presidential election could have major consequences for the future of U.S. engagement in global health, Gostin said. Democratic nominee Joe Biden has pledged to "immediately restore [the U.S.] relationship with the World Health Organization." A second-term Trump is expected to stick to his plan to withdraw the U.S. from WHO. Because of a mandatory one-year waiting period, the exit would be effective in July.

The Trump administration said it will redirect the resources withdrawn from WHO to other global health partners but has not specified which ones.