Accessibility links
Does Wearing Disposable Coveralls On A Plane Protect You During A Pandemic? : Goats and Soda Some passengers don a disposable suit over their clothes to help shield themselves from the coronavirus. Is that helpful? What about gloves, face shields and goggles? Also: A blanket idea! 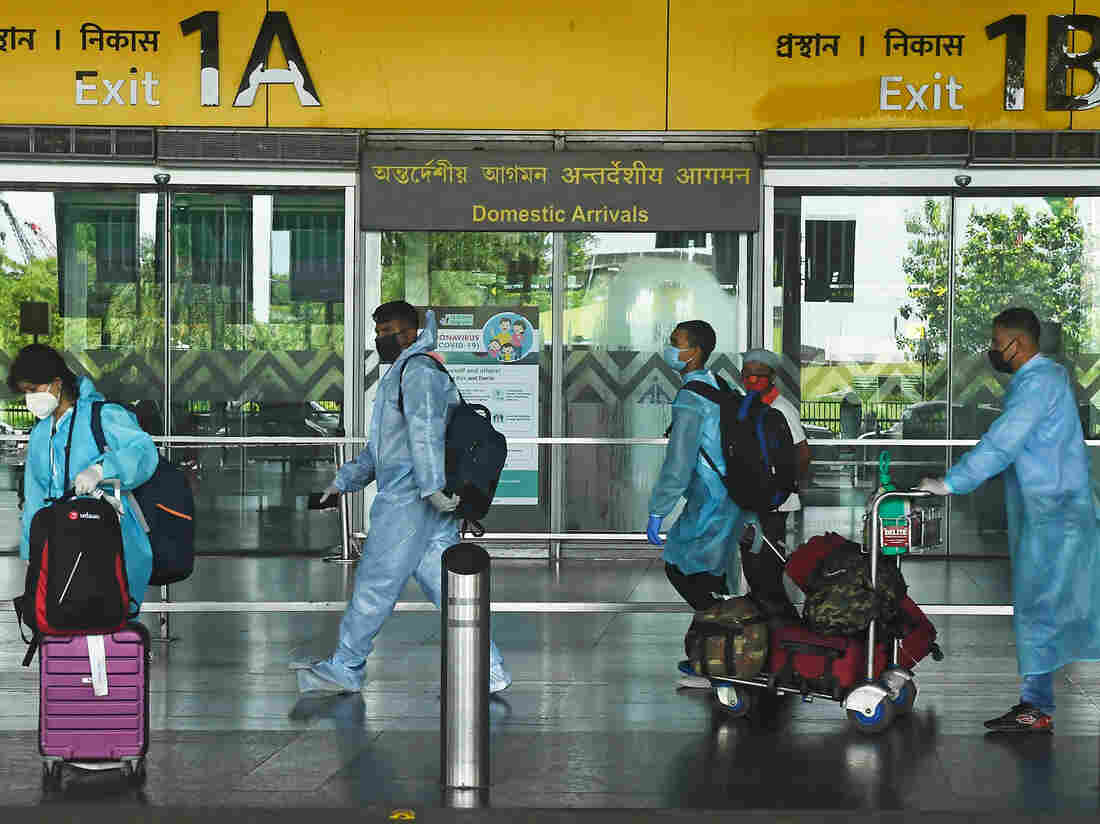 Each week, we answer "frequently asked questions" about life during the coronavirus crisis. If you have a question you'd like us to consider for a future post, email us at goatsandsoda@npr.org with the subject line: "Weekly Coronavirus Questions."

Coronavirus FAQ: Is It A Good Idea To Buy An Air Cleaner For My Home?

OK, so I'd planned a flight to visit my grandkids last week because with cold weather and the flu season looming in the U.S., it seemed like late summer/early fall might be a good window of opportunity to travel.

Of course I wore a mask — that's required. A friend told me she'd flown wearing a pair of disposable painters' coveralls — an ankle-length jumpsuit with full sleeves — over her clothes, then took them off and threw them away upon arrival. I've also seen photos of air travelers around the world wearing what appear to be disposable space suits. 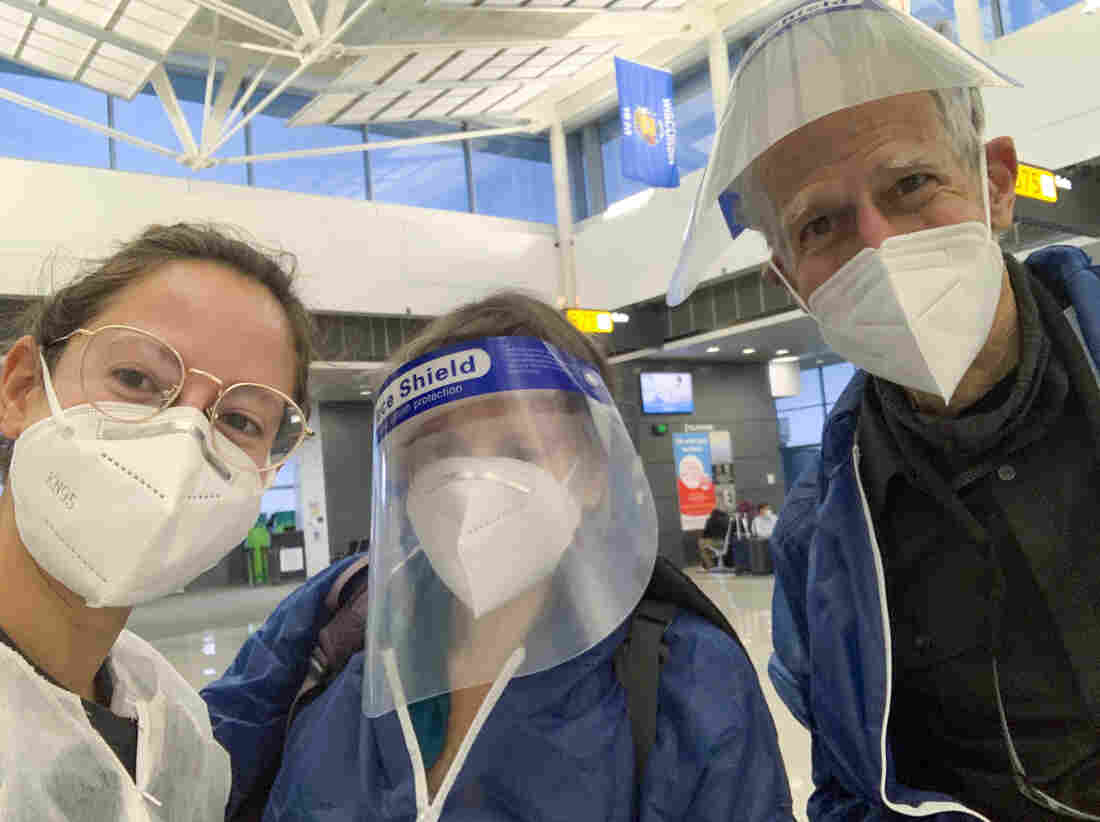 The author and family members in their flying garb. Daniela Silver for NPR hide caption 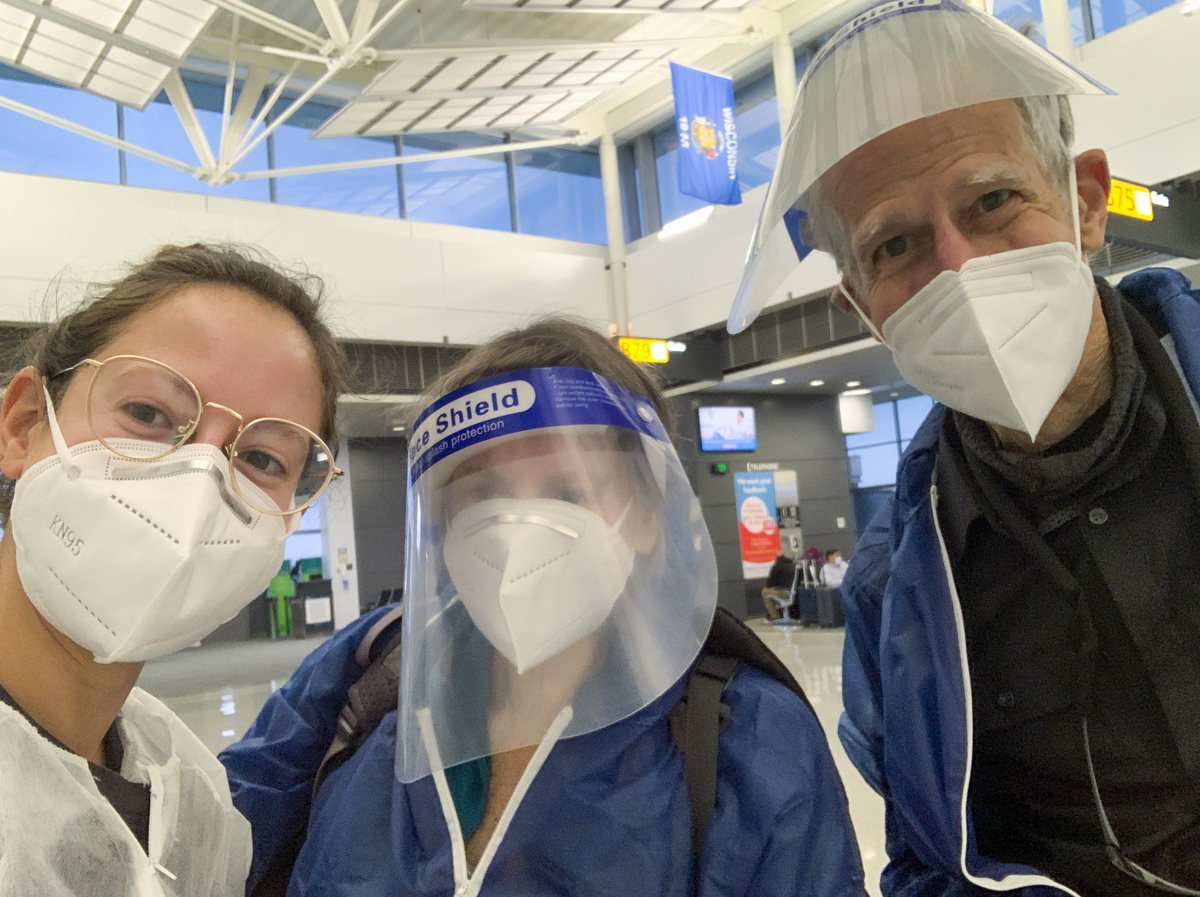 The author and family members in their flying garb.

That sounded like such a good idea — another layer couldn't hurt. So after I got dressed the morning of the flight, I put on a pair of disposable paper coveralls. I felt as if I were suiting up to go into battle and was very happy to remove and toss that extra layer at my destination — a gesture that symbolically indicated at least one risky part of our trip was behind us.

But then I wondered — how much protection did I get?

Spoiler alert: Not much.

Coronavirus FAQs: What Are The New Dating Rules? And What About Hooking Up?

I put that question to Dr. Abraar Karan of Harvard Medical School. Here's what he said.

"While fomites are thought to play some role, we don't know to what extent they do," he began.

Let me interrupt to offer a definition of "fomite," one of the many excellent potential Scrabble words that I've learned during this pandemic. A fomite is a nonliving object that has been contaminated with viral particles that could, in theory, be transferred to your hands if you touch it — virus that could infect you if you then bring your hands to your eyes, nose or mouth. (Although if you wash your hands, that gets rid of the risk.)

Karan continued: "This virus is likely spread primarily through the air, as opposed to other viruses, like Ebola, which are spread through a number of bodily fluids. In theory, if someone sneezed directly onto your clothing, and you soon after touched that and transferred it to your mouth, it seems hypothetically plausible that transmission could occur. But, this is an extremely rare and unlikely situation — I wouldn't focus on clothing as your primary means of protection."

Now, it's true that your clothing could, theoretically, pick up viral particles because you'd inadvertently had contact with a high-touch surface, like a countertop, chair, handrail or the like. There are a lot of such surfaces in airports.

Charlotte Baker, professor of epidemiology at Virginia Tech, says that's why she makes it a practice after a flight to change her clothes when she gets to her ultimate destination. After carefully changing into a fresh outfit, she puts the clothes she wore on the plane into a sealed plastic bag — to keep them separate from the rest of her stuff.

Wearing disposable coveralls would get rid of the need to change, she says — but adds that wear-and-toss clothing isn't so good from an environmental standpoint.

Karan and Baker both stress that whatever clothing you wear will never outweigh the protective benefits of face masks and frequent hand-sanitizing. And that's a growing concern about airborne transmission (which masks can block) — and the role it might play on planes.

A new study from the Centers for Disease Control and Protection looks at multiple cases of transmission on flights at a time when passengers did not commonly wear face masks. The study notes: "This finding also concurs with transmission patterns observed for influenza virus and is generally in line with the mounting evidence that airborne transmission of SARS-CoV-2 is a major yet underrecognized transmission route." And sounds a cautionary note: "[L]ong flights not only can lead to importation of COVID-19 cases but also can provide conditions for superspreader events."

So not only are masks critical, but you might want to keep a spare mask or two at the ready for a long journey, Baker suggests, in the event you drop your mask or inadvertently touch the front of your mask a few times during the trip, say if you take it off to eat and drink.

Covering your eyes should also be a consideration, since the viral particles in the air can infect you through the eyes (although not as easily as through the nostrils or mouth).

That brings us to lab goggles and plastic face shields. Goggles provide a tighter seal than face shield (although the shield does offer another layer of protection over the nose and mouth and would likely discourage you from fiddling with your mask, and contaminating it). Then again, I found it challenging to read while staring through a piece of plastic.

Swimmer's goggles would be super — but kind of weird-looking, perhaps? Then again, no one on my flight or in the airport said anything about my disposable coveralls!

As for plastic or latex gloves, which some travelers wear, the consensus is that they're really not much help. Any potential viral particles that would cling to your hands will, in fact, cling to your gloves. So you still shouldn't bring hands to your face, even if they're gloved. And there's a risk of contaminating your hands when you remove potentially contaminated gloves. Health workers, in contrast, might be deriving benefit from their routine use of gloves since they're in a high risk situation and have protocols for glove removal and quick hand-washing afterward.

Meanwhile, another accessory might prove helpful during this pandemic — but for when you're at home rather than traveling. Linsey Marr, a professor of engineering at Virginia Tech, is a fan of blankets. Not to wrap around yourself when you're out and about but as a way to continue the summer practice of outdoor socializing from a safe distance. Wrapping yourself in a blanket can let you keep up outdoor meetings in brisker weather! (A fire pit might help, too.)

Or maybe, as the days get chillier, you'll invite someone over for an outside get-together, says Marr. (Outdoors is preferable to indoors in terms of risk because the air flow dilutes the virus and disrupts the flow of any viral particles into your mouth, nose or eyes.) Then you'll hand a blanket to your suitably masked guest to wrap around their shoulders for warmth.

If you do that, the recommendation is to wash that blanket and your own afterward — or keep them away from humans for 3 days — to make sure the fabric doesn't transfer any stray viral particles from a wayward cough or sneeze or your conversation. Or you could make the get-together a BYOB affair — bring your own blanket.