Accessibility links
Mystery in Kenya: Why Didn't The Pandemic Hit As Hard As Expected? : Goats and Soda The case count — and death toll — during the pandemic have been surprisingly low. And last Sunday, people were out and about in Nairobi's parks. Researchers are trying to figure out what happened. 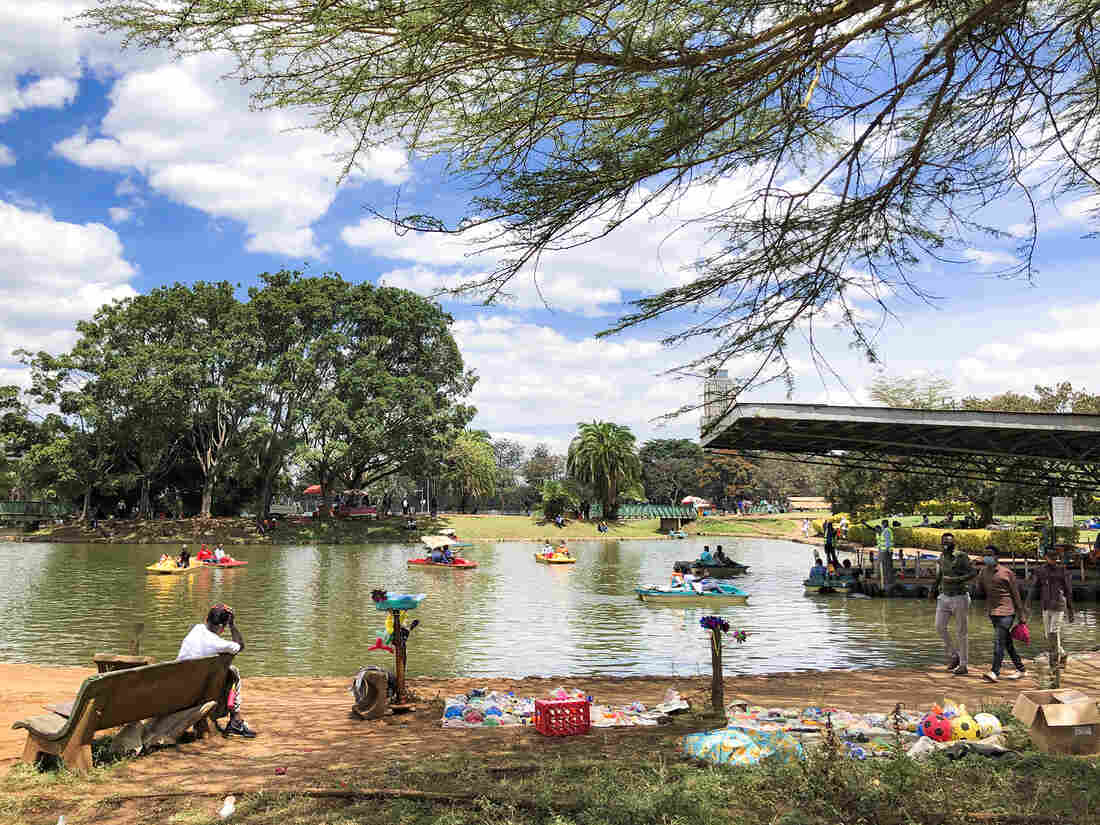 Last Sunday in the park in Nairobi, life was seemingly back to normal in the middle of a pandemic — which didn't appear to hit the country as hard as expected. Eyder Peralta/NPR hide caption 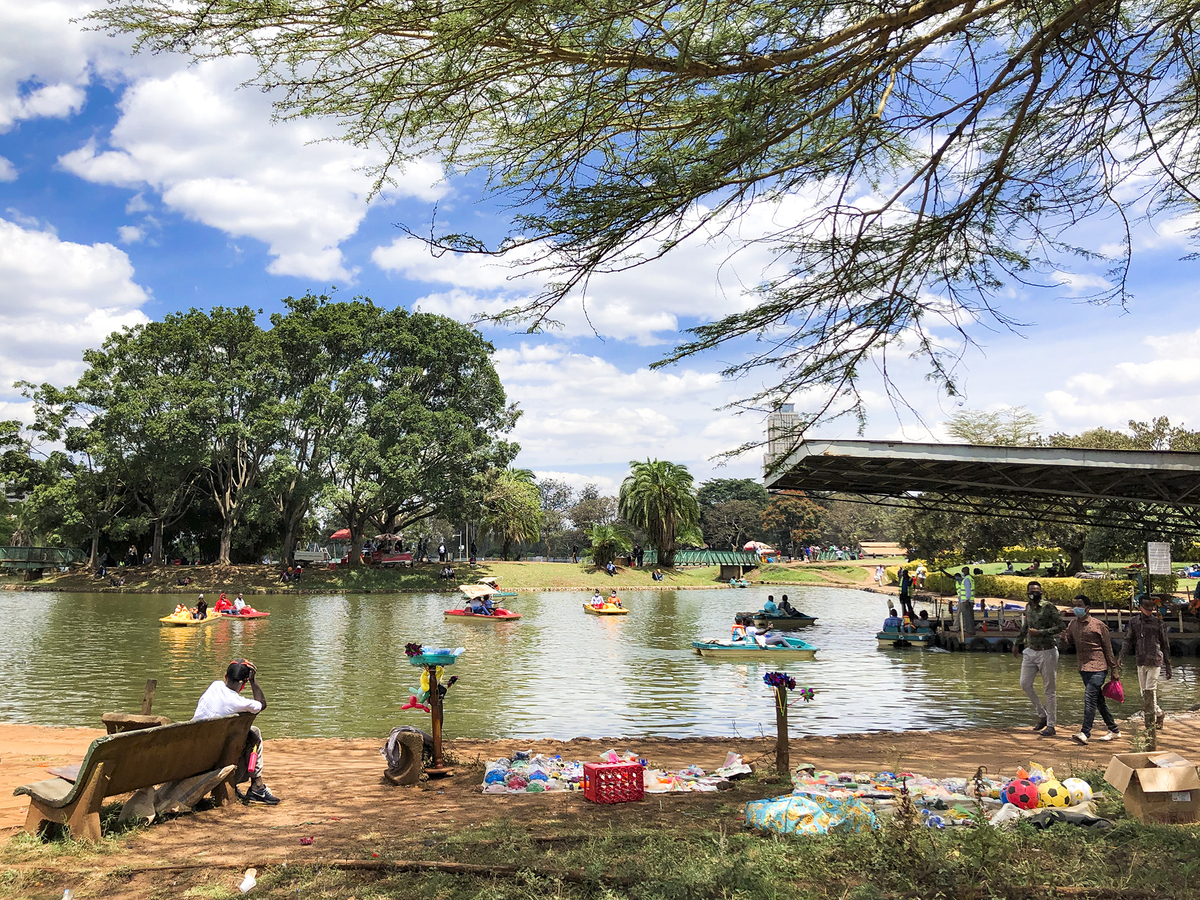 Last Sunday in the park in Nairobi, life was seemingly back to normal in the middle of a pandemic — which didn't appear to hit the country as hard as expected.

This past Sunday at Uhuru Park in downtown Nairobi, it was life as usual.

Kids took rides on horses and camels. Families and lovers shared paddle boats in the lake at the center of the park.

Alice Nyambura and Lucy Wahu, both college sophomores, sat on the grass watching the boats. The sun was shining; the lily pads blooming. They had come here to get their minds off the pandemic.

"I don't think there is anything like corona," Nyambura said.

"It is there," Wahu corrected her. "But I think they are exaggerating the numbers."

When this pandemic began, public health experts issued dire warnings about the devastating effects it would have in Africa.

Just weeks ago, Kenya was girding for the worst. As the country reported hundreds of cases daily, the health minister asked schools to prepare rooms to isolate all the people hospitals wouldn't be able to treat. Cemeteries dug mass graves. But then, just as quickly as the cases rose, they plummeted.

They went from a peak of more than 600 cases a day in August to fewer than 100 the past three days.

The first wave of COVID-19 has seemingly come and gone with fewer than expected deaths — just over 600 — leaving many baffled.

Hospitals and cemeteries have not been overwhelmed. An official at Nairobi's largest public morgue told NPR that on his busiest day, he received only five bodies of COVID patients to bury.

To Nyambura, all of this just sounds fishy.

"We have come down because of what?" she said. "No vaccine, no medicine, how?"

To get at some of this mystery, Dr. John Ojal and his colleagues at the Kenya Medical Research Institute Wellcome Trust Research Program put together a statistical model. They drew on testing data, results from a nationwide antibody study and mobility data from Google, which shows the degree to which Kenyans are moving around. They concluded that in major Kenyan cities, the epidemic is already past its first peak.

Not only that, but the scientists found the new coronavirus had raced through Kenya's population just as it did in Europe and in the United States.

"In Nairobi and Mombasa, for example, 30 to 40% of the population have been exposed," he said.

This means the same proportion of people have been infected in Kenya's two biggest cities as have been infected in some of the hardest hit parts of New York City. But not only has the death rate been low, but also, the country's health ministry has repeatedly stated, about 90 percent of Kenyans who have tested positive have proven asymptomatic.

"If you do compare with what has happened elsewhere, then, yes, Kenya has dodged a bullet," Ojal said.

The model assumes Kenya avoids a second wave if the country sticks to its mitigation efforts. That means Kenyans have to continue to mask and social distance. It means schools, which were shuttered in March, would have to remain so. And then there is big a caveat: Ojal says the model assumes the immunity many have acquired by becoming infected must last for months, which is not a given with this disease.

If those things happen, Ojal's model predicts that by the end of the year, fewer than 1,000 Kenyans will have died from COVID-19.

Ojal's paper has not yet been peer-reviewed. But Dr. Shaun Truelove, a modeling specialist at Johns Hopkins University, said the study is "good work." He worries, though, that the messaging may be too optimistic, especially because Kenya has limited testing and the serological study used by Ojal and his colleagues is a few months old.

The official numbers in Kenya paint the picture of a mild epidemic. But Ojal's study found the virus was infecting multiples more than were being captured by the country's insufficient testing regime.

Truelove said he was surprised by the numbers, but he said the estimates are "possible."

"I would caution taking each of those estimates and holding them as hard fact ... but they definitely are finding truth," he said.

Truelove's colleague at Johns Hopkins, Dr. Bill Moss, said the findings of this paper jive with what other studies have found in similarly densely populated settings like slums in India. South Africa's department of health also announced that early studies have shown that about 29% to 40% of South Africans have already been exposed to the virus.

Moss, who has spent decades studying infectious diseases in Africa, said that's why he finds this study on Kenya compelling: It points to a greater truth.

"To me, there is no doubt that the anticipated kind of tragedy in sub-Saharan Africa hasn't materialized," he said.

What no scientist knows is why this pandemic has been so mild in sub-Saharan Africa. They have hypotheses — maybe it's the continent's young population; maybe there is some cross-immunity with some other coronavirus. But, for now, those are just hypotheses.

The Kenyan government, for its part, is rethinking school closures and the country's 6-month-old nightly curfew.