Accessibility links
The Environmental Tragedy Of Myanmar's Jade Industry : Goats and Soda Decades of mining for jade has left the landscape desolate. Local activists want to make a change — but can they stand up to the powerful companies that dominate the industry? 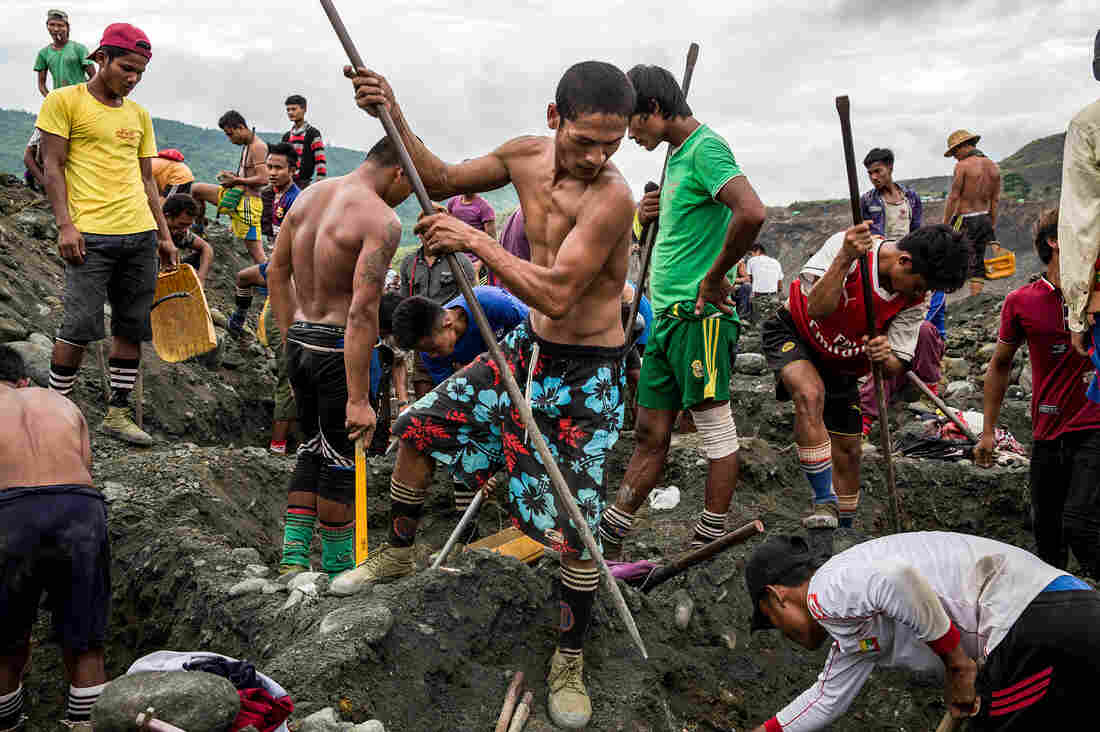 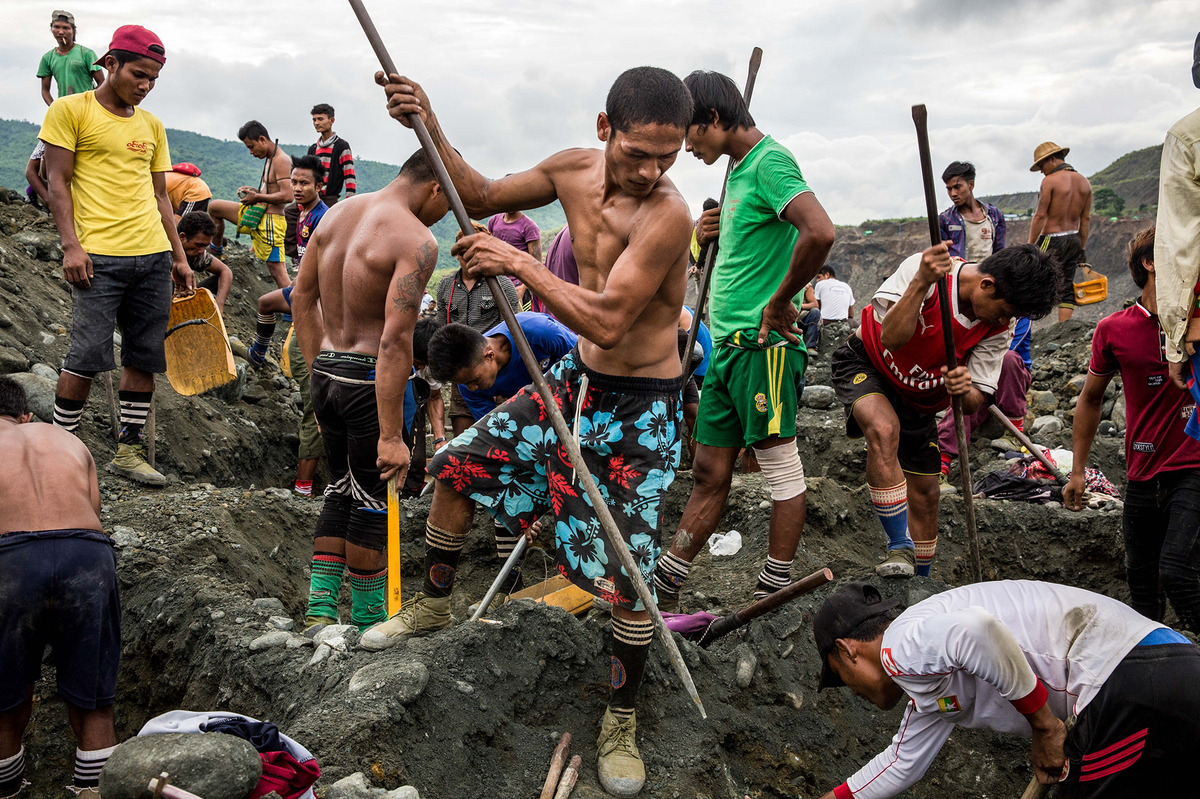 Freelance miners dig for raw jade at a company site in Hpakant, Myanmar, in 2018.

The jade gemstones that generate billions of dollars a year in Myanmar — the world's biggest exporter of the stone — are beloved in China, where they can sell for more than gold. But they are a symbol of tragedy and suffering for the people who live and work in the country's mines in Hpakant, in Myanmar's northernmost Kachin State.

Lahtaw Kai Ring, a former jade miner and a mother of six, recalls what the area was like when she first moved to the township in 1989. The Uru Stream was clean and clear, and people harvested a freshwater oyster — called n-hypa law in the local Jinghpaw language — in its waters.

"Now [people] don't even know what n-hypa law is," she says — they don't see that oyster in the stream anymore. "Hpakant's environment is destroyed. Mountains became valleys and valleys became mountains. Rivers, streams and creeks are upside-down, shifted into chaos."

This year, on July 2, a landslide underscored residents' concerns. The side of a mining site collapsed, sending a torrent of mud and rainwater into the mining valley below. It killed nearly 200 people, mostly freelance miners searching for jade stones while companies had ceased operations for the rainy season. This tragedy is just one of the many deadly environmental disasters that have happened in the jade-rich township after two decades of intensive mining. 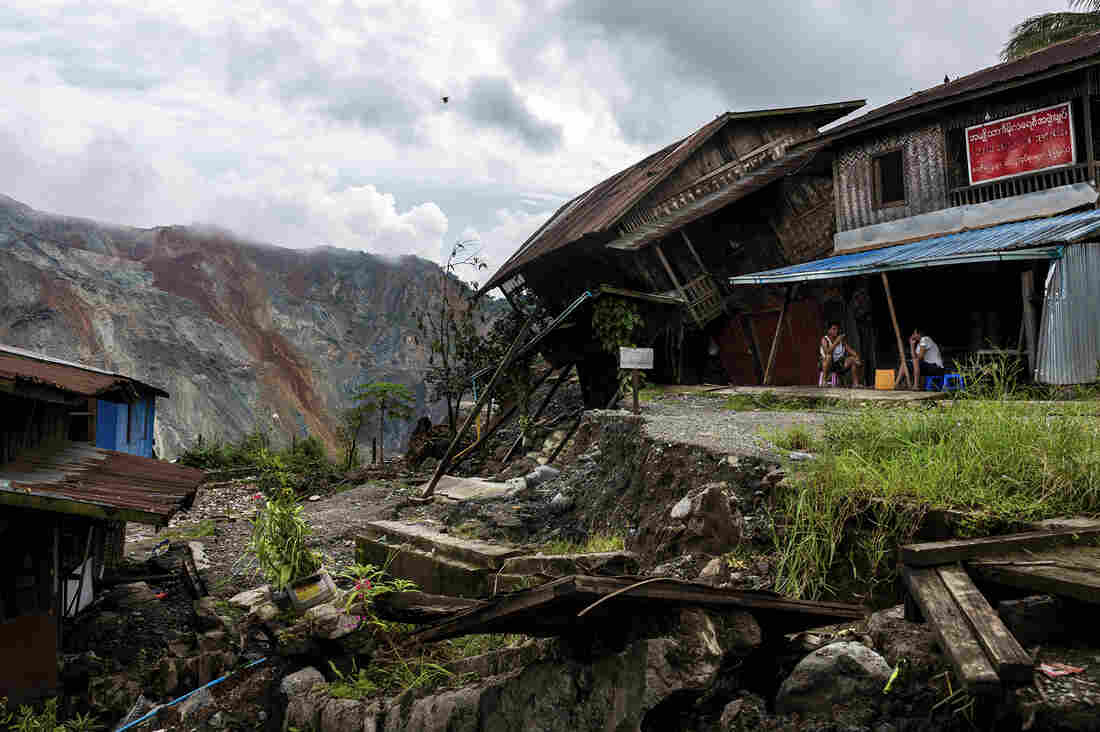 Residents sit near a damaged house caused by a landslide at a mining site in Hpakant in July. The landslide killed nearly 200 people. Hkun Lat hide caption 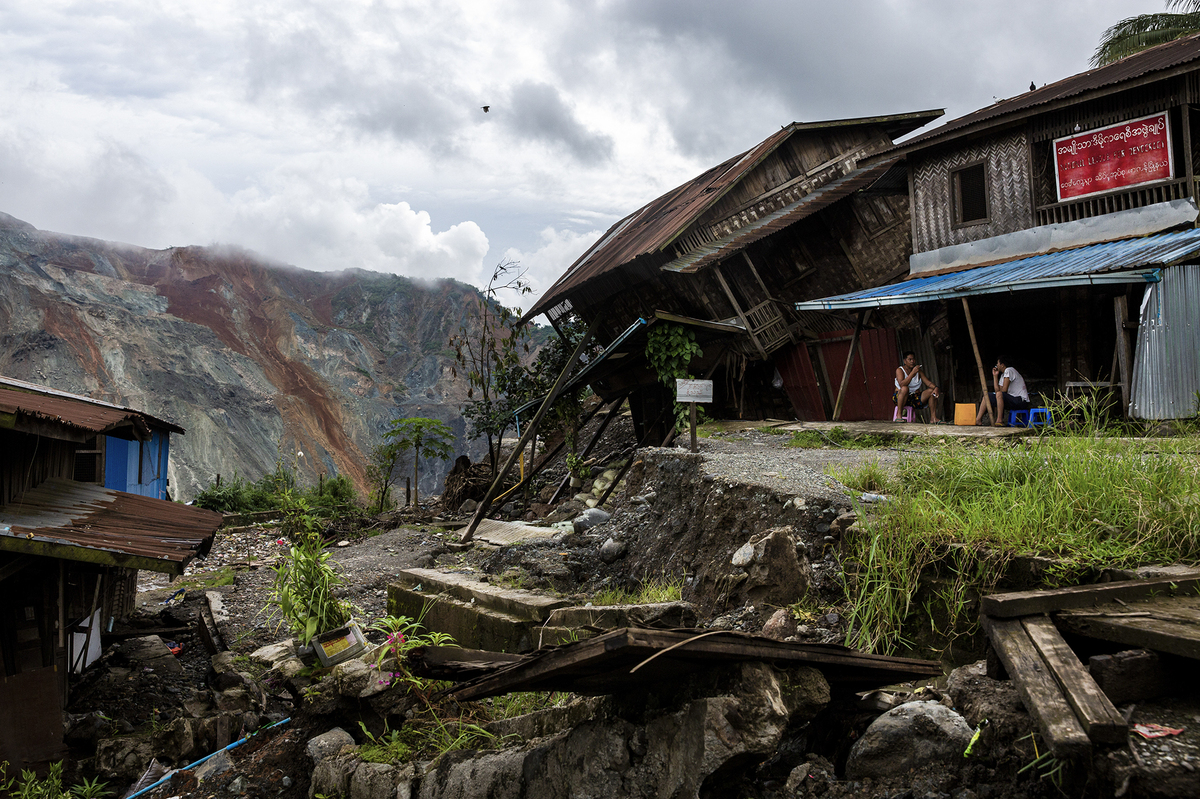 Residents sit near a damaged house caused by a landslide at a mining site in Hpakant in July. The landslide killed nearly 200 people.

Locals, environmental and rights advocates are pushing for the government to take urgent action to stop further destruction of the natural environment and prevent additional loss of life.

In response to the July landslide, the environmental watchdog group Global Witness issued a statement condemning the government's failure to curb life-threatening mining practices in Kachin State. It called for the government to immediately suspend large-scale, illegal and dangerous mining in Hpakant, and ensure companies abusing environmental and safety standards are no longer able to operate.

The statement is one of many ongoing calls for reform, but change has been slow to come in an industry dominated by Myanmar's military, armed groups and companies linked to former generals, according to 2015 research conducted by Global Witness.

Chief among environmental concerns are the height of heaps of mining waste, known as tailings, consisting of discarded earth and stones. Companies often exceed government limits on tailing heap height, and heaps can reach several hundred feet, according to Htingnan Ja Naw, the joint deputy secretary of the Kachin National Social and Development Foundation, a group in Hpakant that advocates for land rights and human rights and provides social services for the local community and miners.

Companies also leave behind vast excavated mining pits at the end of their permit periods. The sites fill with rainwater and turn to lakes, which run up against mining waste heaps that are prone to collapse, causing landslides. 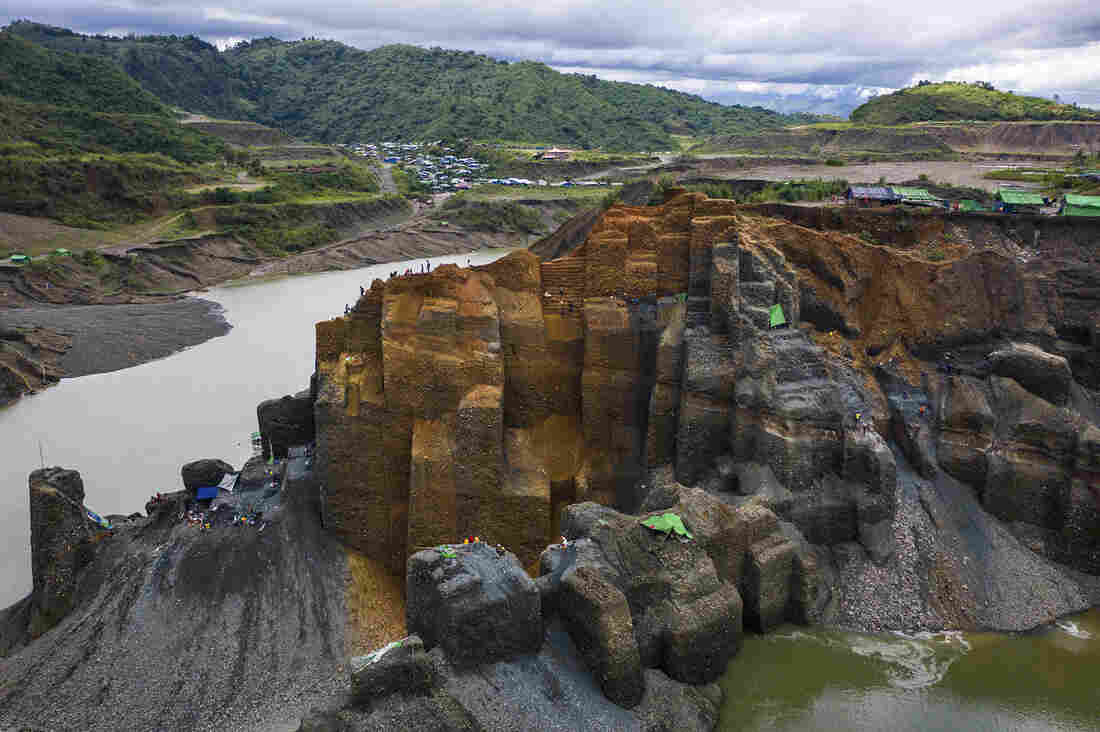 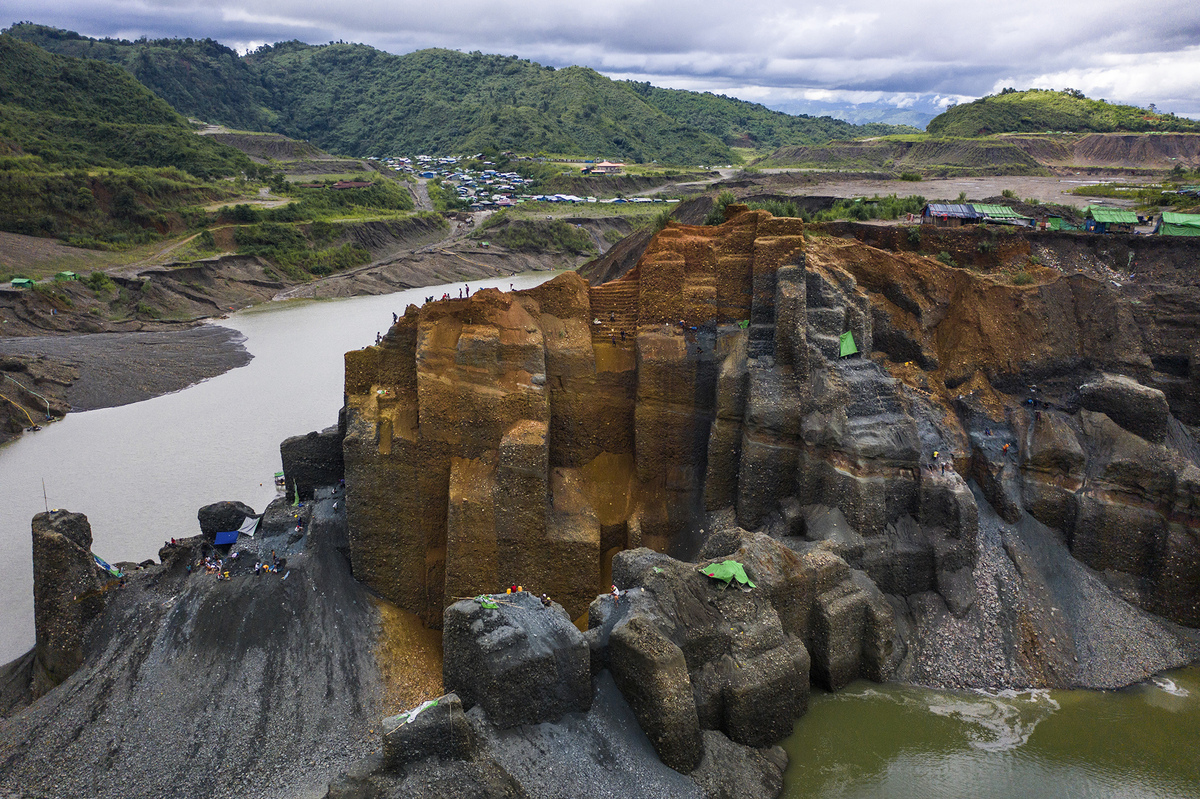 Miners dig for jade on a government-licensed site.

Flooding in residential areas is another major issue. Water sources, including the main Uru Stream which runs through Hpakant, have been disrupted by sediment buildup. Although the government mandates that companies dispose of mine tailings at least 500 feet from a water source, companies dump tailings along the banks of the Uru Stream, says Lar Tong Sau Bawm, a 70-year-old Hpakant native who serves as deputy chairperson of the Kachin National Social and Development Foundation.

As a result of sediment buildup in the stream, flooding has worsened year by year since the early 2000s, he says. "Before, the Uru Stream would swell, but it never disturbed anyone. These days, [companies] have dumped so much waste into it that the level [of water] increased to the same [level] as villages, and many villages [in Hpakant] washed away."

In 2016, in an attempt to address environmental concerns in the gemstone and mining sector, the government halted the renewal of mining licenses until companies could complete newly introduced Environmental Impact Assessments and submit environmental management plans, including provisions for systematically disposing waste. Yet companies have found ways to bend the rule of law and avoid following regulations while continuing to mine illegally, according to reports by Global Witness.

Dashi La Seng, Kachin State Minister of Natural Resources and Environmental Conservation, is concerned about the companies' destructive mining practices. "If [the current administration] can't stop this kind of business norm, we are concerned that environmental issues will worsen," he says. 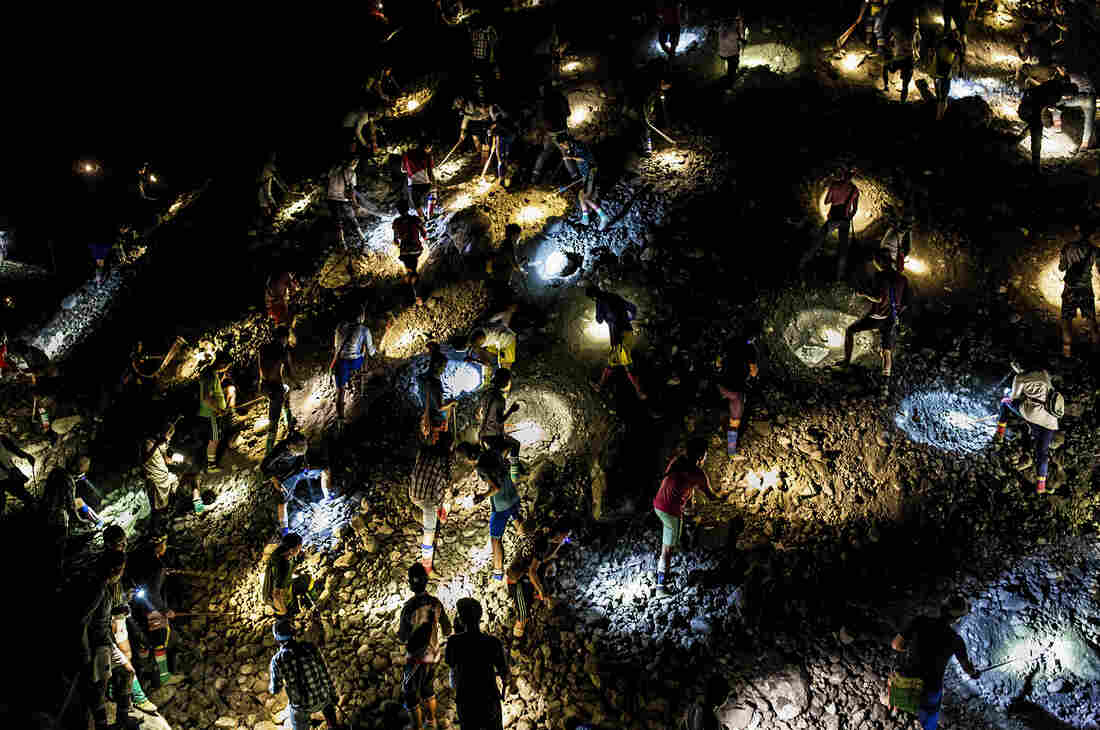 Freelance miners use flashlights to search for jade at night, during company off-hours, in Hpakant in 2019. Hkun Lat hide caption 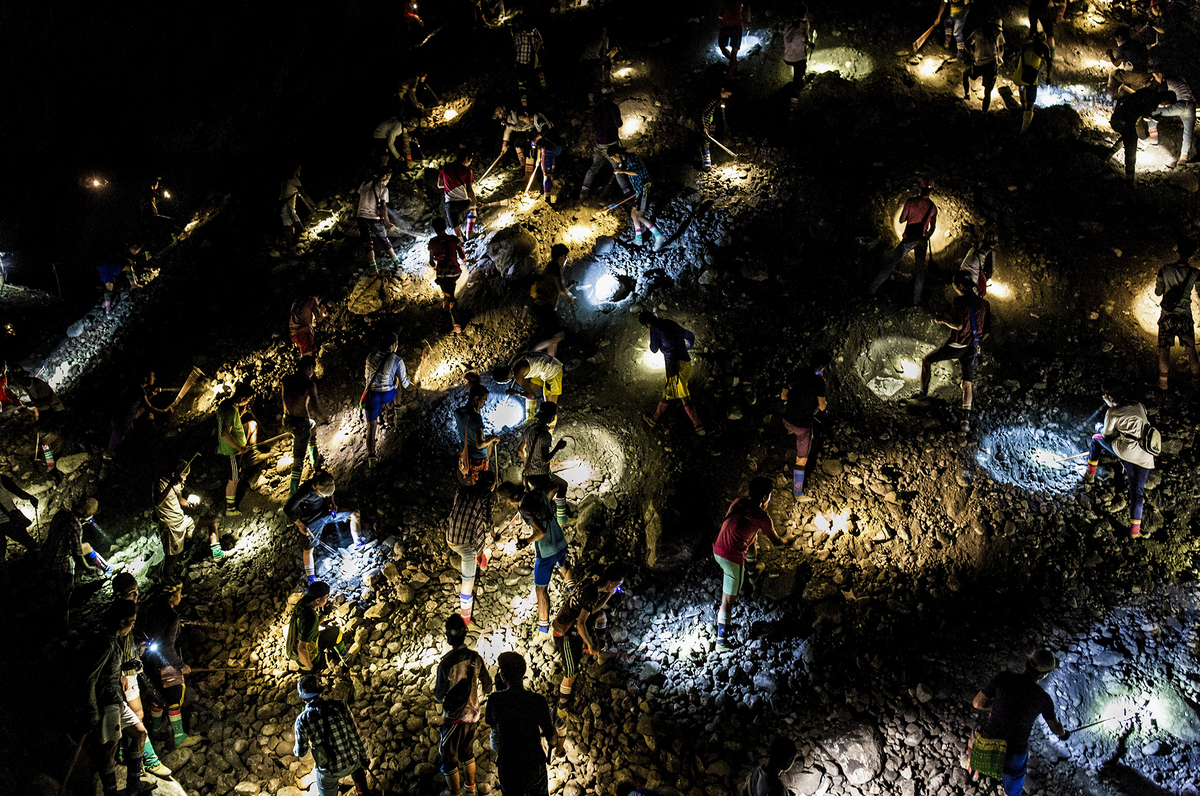 Freelance miners use flashlights to search for jade at night, during company off-hours, in Hpakant in 2019.

Dashi La Seng says the actions his office can take are limited, with jurisdiction over environmental regulation of the mining industry held at the national level. But one action that the national government delegated to his office this year is removing sediment from the Uru Stream. In past years, the government considered this to be the duty of mining companies, but since flooding continued to worsen, locals this year pushed for the government to clean the stream.

Brang Awng of the Kachin Conservation Working Group, a civil society organization that conducts environmental research and advocacy, would like for the government to play a larger role to protect Hpakant's natural environment, including the Uru Stream. But he fears it is no longer possible to restore Hpakant to its original natural state.

To prevent further environmental destruction, he says large companies must completely cease operations in Hpakant. The government should also hold companies accountable for cleaning up the damage they have inflicted, he says, and require that companies invest in restoring the local ecosystem.

Jade trader Seng Ban Aung, 27, worries it may be too late to reverse the damage which mining has inflicted upon Hpakant. "Now, the land is almost gone," he says — to jade mines and the environmental destruction which has followed. "Everywhere has become a plot of [company] land."

This article was supported by the Pulitzer Center.

Hkun Lat is a documentary photographer from Myanmar.