Accessibility links
Kids And Superspreaders Are Driving COVID-19 Cases In India, Huge Study Finds : Goats and Soda Nearly 700,000 people in India were tested for the coronavirus as part of a massive contact-tracing study. The results served up some real surprises. 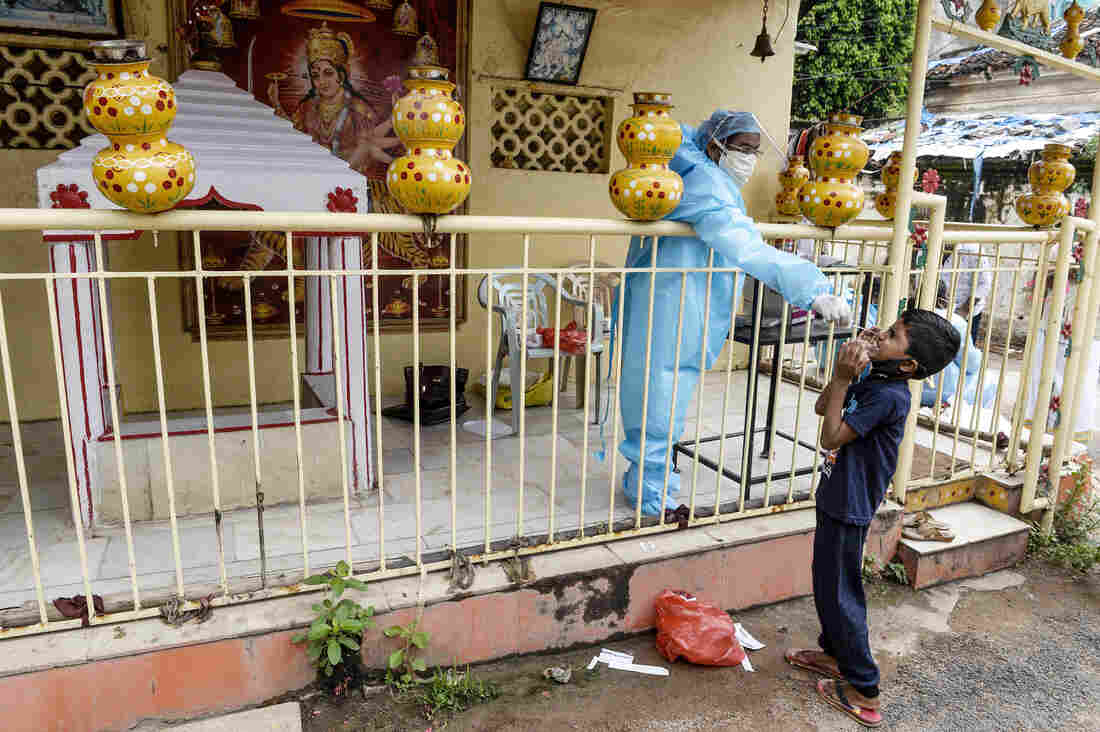 A health worker collects a swab sample from a boy for a coronavirus test at a temporary collection center at a Hindu temple in Hyderabad, the capital of the Indian state of Telangana, on Sept. 30, 2020. Noah Seelam/AFP via Getty Images hide caption 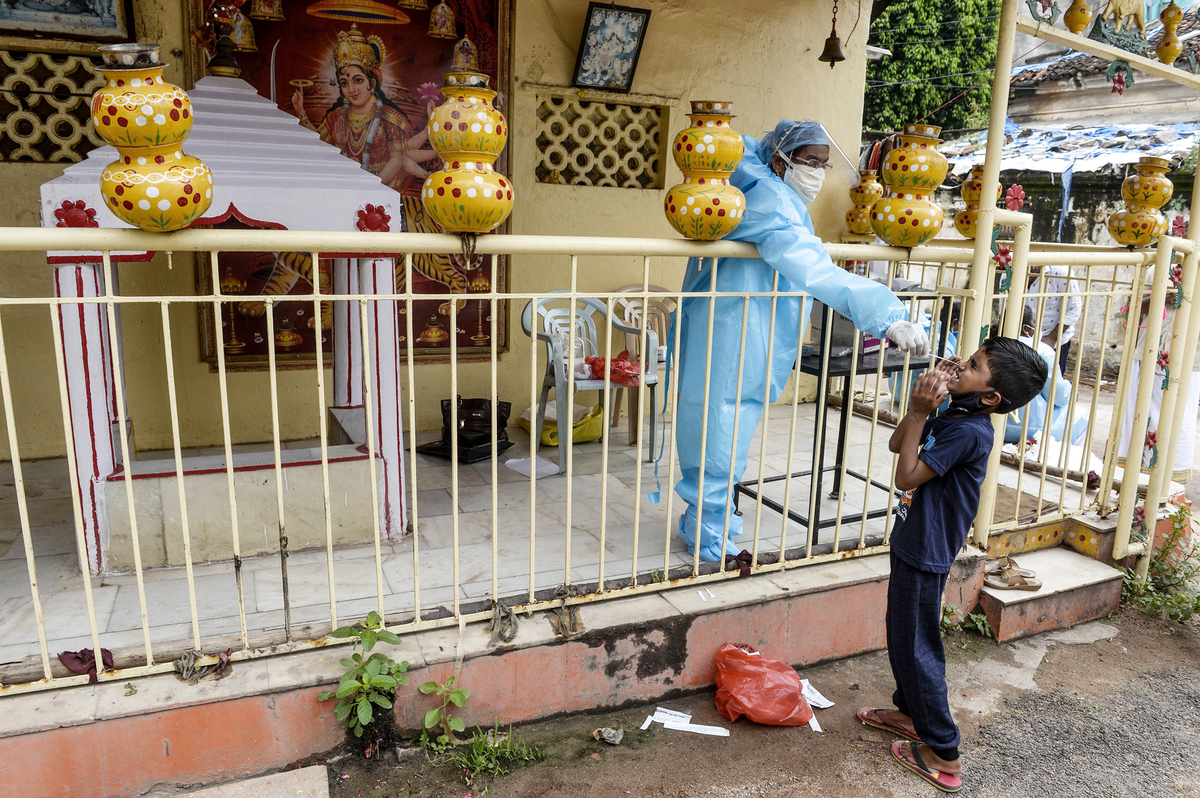 A health worker collects a swab sample from a boy for a coronavirus test at a temporary collection center at a Hindu temple in Hyderabad, the capital of the Indian state of Telangana, on Sept. 30, 2020.

In the largest study ever of transmission patterns for COVID-19, researchers in India tested more than a half-million contacts of 85,000 cases to examine how and to whom the coronavirus is spreading.

The first interesting finding: Children are spreading the virus amongst themselves and also to adults. Second: The greatest risk for infection among the people studied in the two southern Indian states of Tamil Nadu and Andhra Pradesh is a long bus or train ride.

The attack rate — or the risk of transmission from a primary case to someone else — was 80% for passengers sitting next to an infected person on a bus or train for more than 6 hours without a mask. By comparison, there was only a 9% chance of an infected person giving the virus to another member of their household. The chances of a person passing on the virus in a hospital or clinic was 1.2% and the attack rate was just 2.6% for interactions in the general community.

In fact most people — 71%, according to this study — appear to have never passed the virus on to anyone. Given that the outbreak continues to grow, this means there are a small minority of patients responsible for the vast majority of spread.

"Some people just transmit more than other people do because they shed virus," says Ramanan Laxminarayan, the director of the Center for Disease Dynamics, Economics and Policy in New Delhi and one of the lead authors of the study, published this week in the journal Science.

"We've never had a good handle on [superspreaders], and certainly no large-scale study," he says. "Here in this study, we found that 8% of the people who were infected were responsible for 60% of the infections that grew out of these primary cases."

India, unfortunately, has become an ideal place to study the spread of the novel coronavirus. Recently, the country has been reporting nearly 100,000 new cases per day. Testing is widely available and in the states of Tamil Nadu and Andhra Pradesh, where this study was carried out, public health workers have been aggressively tracking local infections.

"They are wealthier states. They have better developed systems" compared with some other parts of India, Laxminarayan says. "They also have this entire apparatus that was set up for HIV/AIDS for contact tracing. So they know how to do this. But they also have a significant amount of COVID. So in a sense, it's a coincidence — they have the capacity to carry out a study like this and they have enough COVID to make it an interesting location to do this study."

One of the big questions in this pandemic is how much of a role do children play in transmission of the virus. It's been known that they get infected. It's been known that they don't tend to get as sick or die at anywhere near the rates of older people. What's been unclear is how much kids contribute to spreading COVID-19 to the rest of the community.

"What we found in our study is that children were actually quite important," says Laxminarayan. "They were likely to get infected, particularly by young adults of the ages of 20 to 40. They were likely to transmit the disease amongst themselves. And this is unusual, because schools in India have been shut since March. So clearly this is happening just at the community [level]. And then they also go out and infect people of all age groups, including the elderly."

Worst of all, the proportion of children who are infected but don't show any symptoms, he says, is higher than adults. So they may not even be recognized as potential carriers.

"[Many] kids are silent spreaders in the sense that they don't manifest the disease with symptoms," Laxminarayan says. "They happen to get infected as much as anyone else, and then they happen to spread it to other people."

Judy Guzman-Cottrill, a pediatric infectious disease professor at Oregon Health and Science University who wasn't involved in the India study, says this study is significant because it was so large, involving hundreds of thousands of people. And she says it gets at some key questions about this pandemic.

"First, this is a study that shows that children do indeed spread the virus to other children," she says. "This will have major implications for kids returning to classrooms, to sports and to other activities where kids tend to be in close contact to each other. I think we need more robust contact tracing studies like this, especially in children, to have a really good understanding of the transmission dynamics in this age group."

Contact tracers in Tamil Nadu and Andhra Pradesh didn't just investigate a batch of 85,000 primary COVID-19 cases — they actually went out and tested nearly 600,000 people who'd been in contact with those initial patients. For some cases, they tracked down and tested more than 80 additional people who may have been exposed by the primary case. The health care workers then collated all that data to map transmission patterns across the states. This is far more complex than the contact tracing that's currently being done in the U.S.

Guzman-Cottrill says it illustrates that contact tracing still has a place in the response to this pandemic, even when case numbers have grown to levels that seem too overwhelming to trace.

"Some people think that contact tracing is only useful when it's a small outbreak and you're trying to end it quickly," she says. "As COVID spread quickly across the country, some people started to say, 'Well, this isn't a good use of our time in public health when in some states there's widespread transmission.' This study shows the opposite."

Understanding the role of superspreaders and of transmission among school-aged children can have major public policy implications. If asymptomatic superspreaders are a real threat, then packing college football stadiums with fans starts to look extremely risky or even irresponsible. If children transmit the virus as readily as adults, then reopening schools should be done extremely cautiously.

President Trump has repeatedly stated that children are "virtually immune" to the virus. In August, as he argued for states to resume regular in-person classes, the president said, "For the most part they [children] do very well. I mean, they don't get very sick. They don't catch it easily. They don't get very sick. And according to the people that I've spoken to, they don't transport it or transfer it to other people, or certainly not very easily."

Ramanan Laxminarayan in New Delhi says this is exactly why there need to be more real-world studies on how this virus is moving in communities.

"The president is obviously not an epidemiologist," Laxminarayan says. "Certainly we cannot rule out children being an important part of the transmission chain anywhere in the world."

In the U.S., nearly a half-million kids have tested positive for the virus so far, according to the Centers for Disease Control and Prevention. CDC data also support the president's assertion that "children don't get very sick." They are far less likely to get hospitalized or die than older people.

But the sheer number of cases among young people is rising.

This week, the American Academy of Pediatrics released a study showing that more than 10% of all COVID-19 cases nationwide are in children, compared to just 2% of cases back in April.

But how much are kids driving the overall pandemic? This new study out of India suggests the role of children in the ongoing spread of this disease in the U.S. — or anywhere else — shouldn't be ignored.