Accessibility links
Award-Winning App For People With Dementia From 3 Nigerian-Irish Teens : Goats and Soda They faced bias against women in science. They faced racism because their families come from Africa. And they triumphed in a competition to develop a problem-solving app! 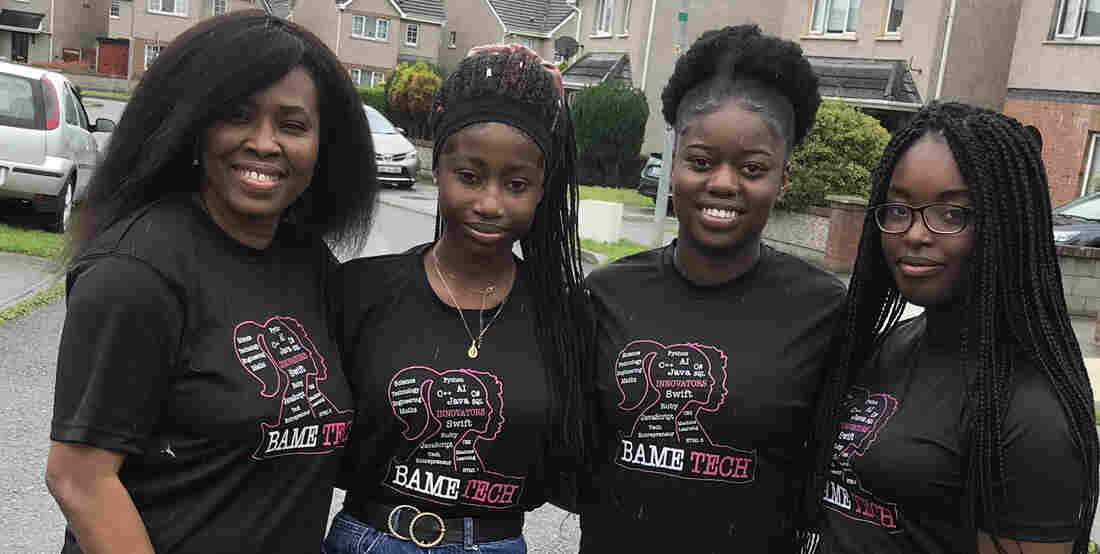 Wait until you see their victory dance (check out the tweet at the end of this post). Evelyn Nomayo (left) was the mentor for the team that created the award-winning Memory Haven app: (left to right) Rachael Akano, Margarent Akano and Joy Njekwe. Memory Haven For NPR hide caption

An award-winning app that can help patients with dementia will launch later this month in app stores. But unlike most apps — made by professional software developers in a male-dominated tech industry — this one was created by three teenage girls.

The Nigerian-Irish teens are the champions of Technovation Girls, an international competition that challenges young women to develop an app that can solve a problem in their community. The annual competition is hosted by Technovation, a nonprofit organization that empowers girls to become leaders in tech.

The girls were guided by project mentor Evelyn Nomayo, an Afro-Irish developer and the founder of Phase Innovate, an organization that trains and mentors underrepresented minorities and women in tech. Nomayo told them about her mother, who experienced dementia, and that inspired the teens, who live in Drogheda, Ireland, to create an app that could help with the disorder. The 12-week challenge resulted in Memory Haven, which beat out more than 1,500 submissions from 62 countries.

Memory Haven can be used by both patients and caregivers. Its six features target three problems faced by those with dementia: memory loss and difficulty with recognition and speech. A reminder feature, for example, alerts both the patient and caregiver that it's time for medication, while photo albums allow users to flip through tagged photos identifying who is in the image.

NPR zoomed with the creators of Memory Haven last week to learn about their app, the challenges they've faced as women in tech and what international victory felt like. Spoiler alert: You're going to want to see their victory lap. (This conversation has been edited for brevity and clarity.)

Tell me about the woman who inspired this app.

Evelyn Nomayo: My mom started having dementia problems three to four years ago. The first time I realized something was wrong was when she started hallucinating. She lived in America, but she'd be imagining that she was in Nigeria. One time [when I was visiting her] I gave her something to sew, and I could see the pain in her eyes because she forgot how to. She used to be a seamstress, but she couldn't do it anymore. So some of my experiences that I had with her, the team translated into technology to help others. She passed away earlier this year.

How can Memory Haven help people with dementia?

Rachael Akano, 16: Our app has six features: photo albums, music, outreach, face and voice recognition, memory games and reminders. The memory game allows [a user] to put their cognitive ability to the test while promoting memory retention in a fun way and improving focus and speed. The face and voice recognition feature makes it easy for users to identify their friends and family. Then research suggests that musical memories are the least affected by dementia, so we created a music feature for personal playlists.

What was everyone's role on the team?

Margaret Akano, 17: I was the project manager.

Rachael: And I was the financial manager.

Joy Njekwe, 17: I was the sales manager, but we all worked on everything really.

And Evelyn—what inspired you to mentor this team?

Evelyn: I'm currently doing a Ph.D. [in computer science and statistics]. During this process, I found that most of the time, I was either the only girl in class or the only black person or person of color. Whether I'm working or being educated, it's so obvious that there's a shortage of women in this space. So I just felt it: There was a need to bring more girls and people of color into that space.

What prejudices have you faced as a women or persons of color in tech?

Evelyn: The way my male counterparts would view me and doubt my intelligence: "Can she do this? Can she not do that?"

Rachael: I think the most negative reaction we received was when the Irish Times announced that we made it to the finals [on Twitter]. We got amazing comments, but the negative ones just naturally stick with you. People said we weren't Irish and that we didn't deserve to represent the country. They put a monkey face [to represent a black girl's face]. Just crazy, crazy oceans of racism for absolutely no reason.

How did that make you feel?

Rachael: I think the most surprising part was that our parents weren't really surprised. I remember running to my parents and saying, "Mom, dad: Look what they are saying about us." And my dad said, "Guess you better get used to it."

What are your career goals?

Margaret: I'm currently in medical school. I hope to specialize in precision medicine, which deals with how technology can help people in the medical world.

Rachael: I instantly fell in love with the business aspect of the competition. I think I'm definitely going to go into international business and IT.

Joy: I'm equivalent to a senior in high school and am getting ready for college. Right now, I'm looking at computer science and engineering or some sort of science field because that's what excites me.

What do you guys do when you're not coding or studying?

Margaret: I'm pretty into music. I love singing and in high school, I was into sports as well.

Rachael: I eat, breathe and sleep music. I play the piano, the guitar and I sing. I'm also really into sports like basketball.

Joy: At the moment, because I'm studying for my final exams, I'm kind of lacking in hobbies. But sometimes I like to read.

What was your reaction when you realized you won the competition?

Rachael: We went to our mentor's house to watch the live announcements. I can't even explain that moment. It was insane. There's a video going around Ireland of our reaction actually.