Accessibility links
Million Dollar Aurora Prize Goes To Mother-Daughter Duo In Somalia : Goats and Soda The patriarch/peace activist was assassinated in Somalia. His wife and 3 daughters fled. Mom (and one child) returned to build on his work. Now they've won the Aurora Prize — which has its own twist.

No It's Not A TV Movie: Death, Renewed Determination, A $1 Million Prize

No It's Not A TV Movie: Death, Renewed Determination, A $1 Million Prize 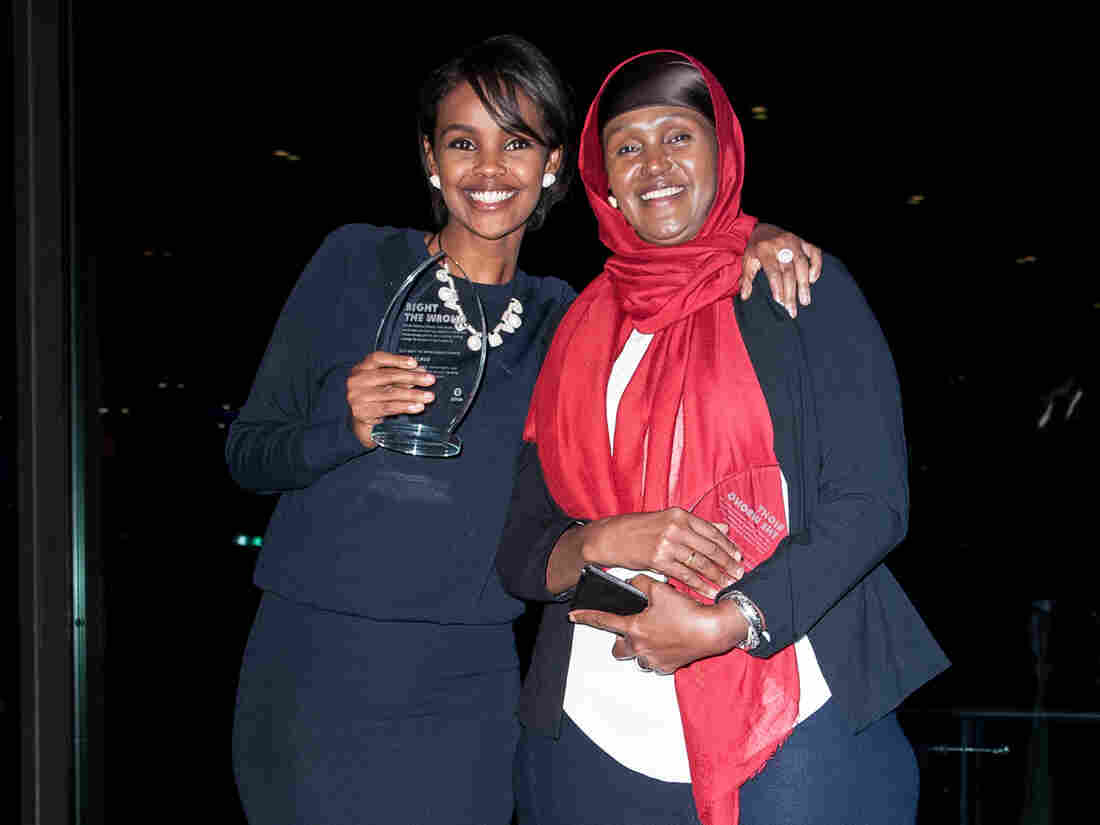 Fartuun Adan (right) and Ilwad Elman, the mother and daughter named winners of this year's $1 million Aurora Prize for their efforts to help former child soldiers and others in their native Somalia. Kris Connor/Getty Images hide caption 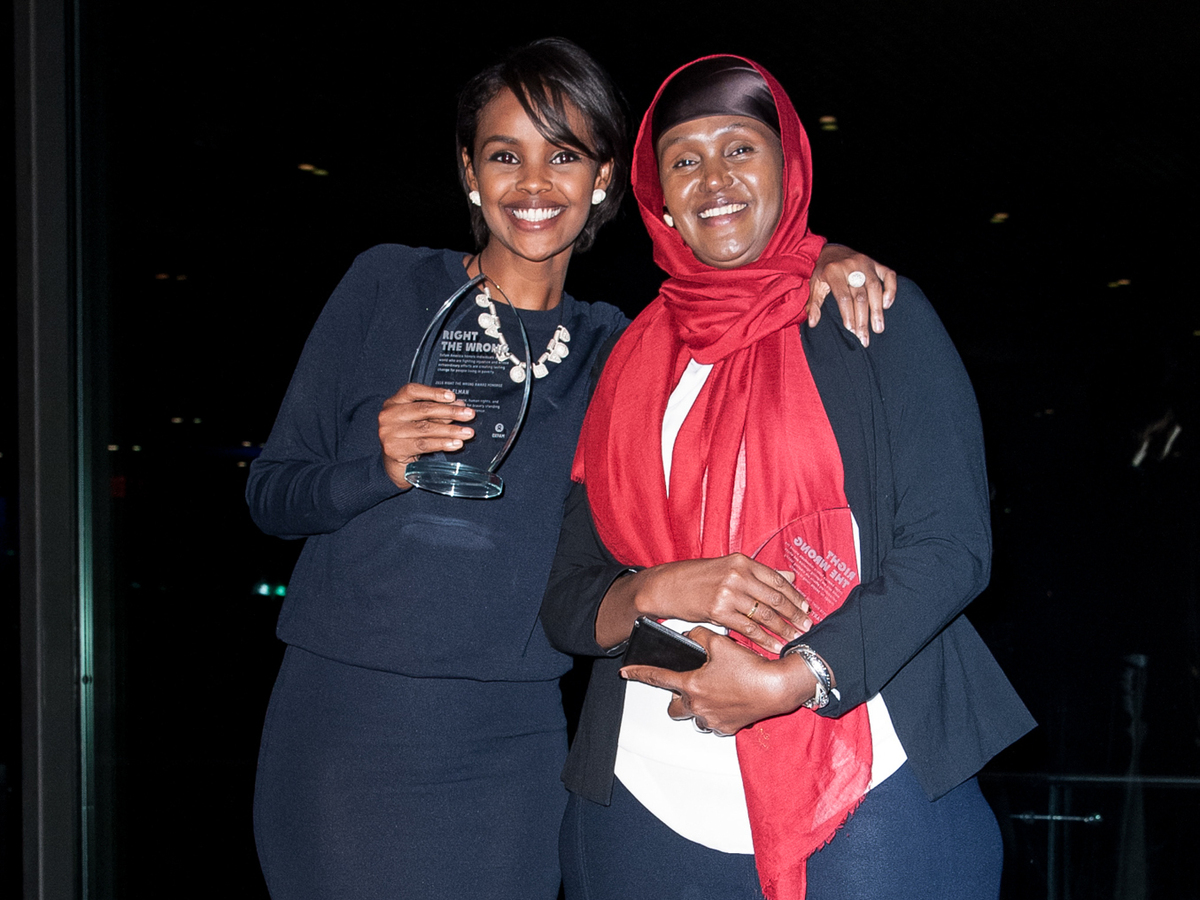 Fartuun Adan (right) and Ilwad Elman, the mother and daughter named winners of this year's $1 million Aurora Prize for their efforts to help former child soldiers and others in their native Somalia.

Sometimes, you must go home again, no matter the risks.

That's the philosophy of the winners of the 2020 Aurora Prize for Awakening Humanity, which comes with a $1 million grant.

The recipients are Fartuun Adan and her daughter, Ilwad Elman. Their home is Somalia. After their husband and father, the Somali peace activist Elman Ali Ahmed, was assassinated in 1996 in Mogadishu, Fartuun and her three daughters left the country and found safe haven in Canada from the African nation's brutal civil war. What called them back was the desire – and sense of responsibility — to fulfill Elman Ali Ahmed's humanitarian legacy.

"The warlords had taken over the country and told him many times you have to stop the work you're doing," Fartuun says, recalling her husband's story. At a time when militias were using child soldiers, she says, "we were presenting opportunities to help them, for education, vocational training, jobs. He also started a football club that still exists."

From afar, Fartuun and her daughters followed the news coming from Somalia. The civil war had devastated the country and severe famine had ravaged it further, leaving approximately 500,000 Somalis in displaced persons camps, not to mention the possibility of attacks by Al-Shabab insurgents.

Fartuun returned in 2006. "We wanted to continue his [her husband's] work," she says. Her journey back had been long expected by her daughters. "I always knew I had to pick up the pieces, but I also had to raise my kids," says Fartuun, now 51. "I always told them I'm going back" after they reached high school.

Which is what she did, traveling back and forth between Canada and Somalia starting when the daughters were ages 18, 16 and 14. As for who took care of them during their mother's absences, middle-daughter Ilwad replies, "We took care of ourselves."

Less expected was Ilwad's return to Somalia four years later, in 2010. "I was 19, and I was having a crisis not knowing to do," Ilwad says. "I felt the need to visit Somalia and see for myself what was going on." She planned to stay a month, tops.

Her worried mother urged her to remain in Canada. "I told her, don't come, it's too hard here, too much going on," Fartuun says, including threats over her work advocating for abused women since rape was considered a taboo subject.

"At first it was scary, the height of the conflict, mortar attacks every night," Ilwad recalls. "But I saw my Mom trying so hard to create safe spaces for women and children. I fell in love with the work and found my mission."

Together, they took up the mantle of the Elman Peace and Human Rights Center that Fartuun and her husband had founded in 1990. Despite Fartuun's long-distance efforts from Canada to maintain their programs, it had languished in her absence. Fartuun had already begun to revive the "Drop the gun, pick up the pen" initiative that she and her husband had introduced in 1992, the year after the civil war began. The program's goal remained the same: to rehabilitate former child soldiers, many of them orphans, by opening schools that would provide education and job skills.

They also began new projects to help women and girls affected by gender-based violence. With their Sister Somalia project, they founded the country's first rape crisis center; they now operate several such centers and safe houses. This year, they also opened a school for girls: the Girls Leadership Academy.

In addition, they are using Somalia's long coastline to introduce ocean and surf therapies to help heal traumatized children.

"The concept of traditional [talk] therapy is not a thing in Somalia," Ilwad explains. In exploring other therapeutic strategies, she discovered surf therapy, which was proving successful for war veterans in the U.S. suffering from PTSD. She also introduced art therapy, yoga and other mind-body techniques.

The Elman center is funded through donations and from partnerships with government and United Nations agencies. The charity is also exploring private sector partnerships.

The mother and daughter work together, but, as Fartuun says, laughing, "I am always the mom. I am in charge, or at least I think I am."

Their emphasis on youth and education programs is by design. "This country has been in conflict for 30 years. Now we're building for the next 30 years," Ilwad says. "It's more sustainable to invest in schools for children" and help them build their lives responsibly than to respond to one crisis after another.

"Our theory of change is first, focus on the individual recovery of the victim" — then create an environment where education and community can flourish.

For job and vocational training, for instance, "we always do an analysis, asking people in the community what kind of jobs do you need or want," Fartuun says. "We train [the kids in our] schools for plumbing, electricity, office management, secretarial, construction. Not a lot of people have these skills." They also provide training in financial management, auto mechanics, carpentry, interior design, masonry, greenhouse farming, hair care, catering and hospital careers, film-making and photography. For those with an entrepreneurial idea there's the possibility of seed capital for start-ups.

The mother and daughter's return to Somalia has been marked by a family tragedy. In November, Almaas Elman, one of Fartuun's three daughters and herself a human rights activist, was shot and killed on the streets of Mogadishu — still an unsolved case.

But in the aftermath of this tragedy comes news of the Aurora Prize. The idea behind the prize is to promote what the founders describe as a cycle of gratitude. Aurora confers prize recipients with $1 million which they in turn distribute to other humanitarian organizations. This sets up "a re-circulation of funds to vitalize lives," explained Vartan Gregorian, the organization's co-founder and president of the Carnegie Corporation.

Fartuun and Ilwad will be among those appearing at Aurora's fifth-anniversary celebration to be streamed live from the New York Public Library on October 19. Hosted by journalists David Ignatius and Judy Woodruff, the event will feature performances by cellist Yo-Yo Ma and trumpeter Wynton Marsalis.

"The award is a big honor and it comes with responsibility," Ilwad says. "Not only are we being recognized, it is empowering us to work with other organizations, to pay forward and help others continue to do the same."

The award also reinforces their commitment in the wake of the death of Almaas Elman. "One of the things that has helped us heal is living with purpose and gratitude every day," Ilwad says.

The three organizations Fartuun and Ilwad selected are Love Does, Panzi Foundation and Prajwala.

Dae Eriksson, executive director of Love Does, has known and worked with Fartuun and Ilwad on previous projects, including building safe houses for victims of sexual violence. "They are individually such strong women, so passionate about their work," she says.

When she made her first visit to Mogadishu, Eriksson recalls, Fartuun gave her "a kind, motherly talking to about needing more security, we had no idea" of how dangerous the city could be. On one occasion she joined Ilwad to teach a surf clinic for about 50 boys, all under age of 18, who had previously been child soldiers. The experience was memorable, Eriksson says: "Seeing these children who had been through horrific situations being brought back to a sense of childhood fun, running into the water. And you could see that Ilwad and these children shared that joy."

Aurora's founders — Noubar Afeyan, Vartan Gregorian and Ruben Vardanyan — initiated the prize in 2015 on the 100th anniversary of the Armenian Genocide on behalf of the Armenian people and in tribute to those who acted to try and save them.

"We are returning that favor," says Gregorian. "This is gratitude in action to help people we don't know to survive, as an act of humanity."

In keeping with that philosophy, Aurora chooses individuals who put their own lives at risk to save others. "Their awardees are people doing work literally on penalty of death," says Ruth Messinger, global ambassador of American Jewish World Service.

Dr. Tom Catena, winner of the 2017 prize and now chair of the Aurora Humanitarian Initiative, is the founder and director of the Mother of Mercy Hospital in the Nuba Mountains of Sudan, where he is the only medical doctor for the war-torn region of approximately one million.

What particularly impresses him about Fartuun and Ilwad's work is their rehabilitation of child soldiers. "Some of these kids I'm sure did atrocities and might be looked at as throwaway kids," he says. "And to take on the long-term commitment to help them is not something many people would do."

Winning the Aurora Prize, Fartuun says, "gives us more motivation to do even more."

Diane Cole writes for many publications, including The Wall Street Journal and The Jewish Week, and is book columnist for The Psychotherapy Networker. She is the author of the memoir After Great Pain: A New Life Emerges. Her website is DianeJoyceCole.com

An earlier version of this story incorrectly stated the name of the 1992 program introduced by Elman Peace and Human Rights Center. The correct name is: "Drop the gun, pick up the pen."