Accessibility links
First Drug To Treat Ebola Patients, From Regeneron, Approved By FDA : Goats and Soda Regeneron — the pharmaceutical company developing COVID-19 treatments — has received FDA approval for the first drug aimed at another infectious disease that's been in the headlines. 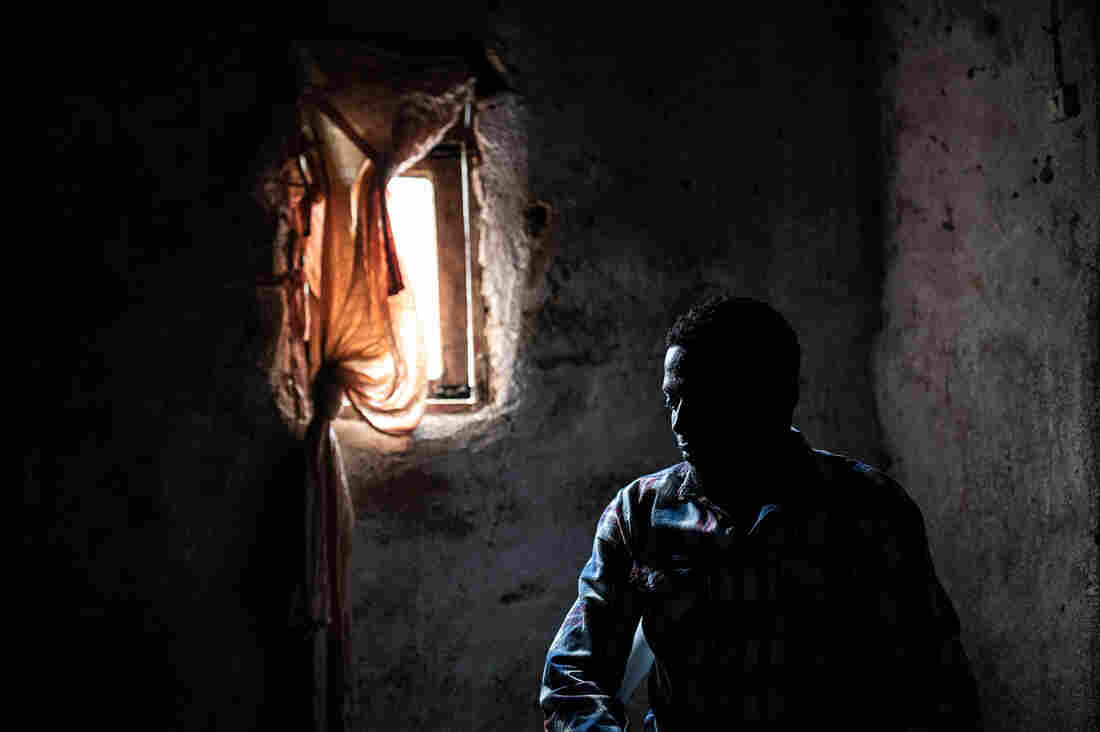 Claude Mabowa, pictured in 2019, is an Ebola survivor from Congo who lost family members to the virus. John Wessels/AFP via Getty Images hide caption 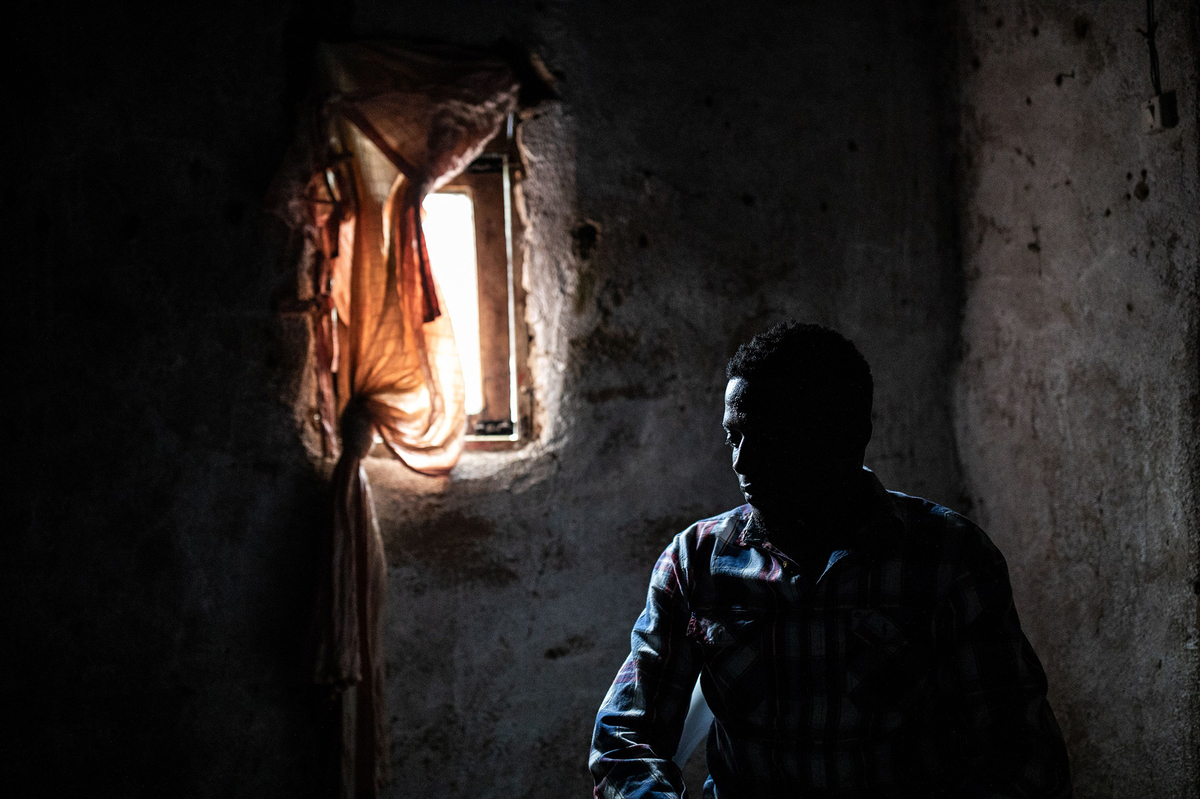 Claude Mabowa, pictured in 2019, is an Ebola survivor from Congo who lost family members to the virus.

While scientists work to develop effective treatments for COVID-19, there is good news on another disease front.

This month the U.S. Food and Drug Administration granted formal approval to an antibody cocktail from the pharmaceutical company Regeneron that's been shown to reduce an Ebola patient's chances of dying dramatically.

The treatment, which has been known as REGN-EB3, is now being marketed under the brand name Inmazeb. (Regeneron is also making another antibody cocktail to treat COVID-19. That medicine got a lot of attention when it was given to President Trump. These antibody cocktails attack the Ebola and SARS-CoV-2 viruses in similar ways – using multiple antibodies to block the replication of the virus — but are completely different medications.)

Julien Potet of Doctors Without Borders' Campaign for Access to Essential Medicines says approval of the first drug to treat Ebola is a significant milestone.

"It's very good news for Ebola patients," he says. "And approval by a stringent regulatory authority like the U.S. FDA is very helpful in order to support the introduction of that treatment in other countries."

The announcement comes as the world's second-largest Ebola outbreak, which began in Congo in 2018, was finally contained this summer. The World Health Organization reported that nearly 3,500 people were infected in that outbreak and at least 2,287 died.

A subsequent outbreak, which erupted in Congo's Equateur province in June, has resulted in 128 cases and at least 53 deaths, underscoring the ongoing need for an effective treatment.

The high death toll in Congo reflects the deadly nature of the disease – and is a reminder of challenges faced during the West Africa outbreak.

Indeed, the high mortality rate from Ebola adds to the complexity of addressing the disease. Once it starts to spread, fear spreads with it. In the early days of the West Africa outbreak in 2014, health care workers had trouble convincing patients to isolate themselves in "treatment" centers. It was widely known that a patient's chances of survival after checking into an Ebola treatment unit were minimal, so people who were infected preferred to stay with their families.

"In Liberia, people were talking about mortality rates of 80%," says Dr. Scott Lillibridge, the chief epidemiologist with the International Medical Corps, who has worked in Africa during Ebola outbreaks since the 1990s. He says the infection was terrifying in part because it was viewed as a death sentence. "Now there's hope," he says.

Lillibridge says that combined with a new effective vaccine for Ebola, which won FDA approval in December, the world now has a 1-2 punch against the disease.

"I think it really will help standardize treatment and move us to the next level," he says. Before REGN-EB3, health workers had no approved drug to counter Ebola. They could only give patients supportive care — plenty of fluids, antibiotics to fight co-infections, acetaminophen to try to bring down their fever. Lillibridge acknowledges that a third of the patients getting the new antibody cocktail from Regeneron still died during the trial in the eastern Congo but notes: "Compared to 80%, that's very low, and it's moving in the right direction. I would suspect that over the next 10 years we will reduce that even further."

In addition to being used in trials and under compassionate use authorizations during the 2018-2019 outbreak in the eastern Congo, REGN-EB3 was also deployed to treat patients this year in the outbreak in the country's Equateur province. Regeneron developed REGN-EB3 with support from BARDA, the Biomedical Advanced Research and Development Authority, which is part of the U.S. Department of Health and Human Services.

BARDA bought up all of Regeneron's production – a decision that reflects humanitarian concerns but also is aimed at creating a domestic stockpile — and now is making it available to the Congolese government for free. A spokeswoman for Regeneron, Hala Mirza, says there are sufficient supplies available for the current outbreak and "we continue to manufacture more."

Doctors Without Borders' Potet says the world needs to come up with a sustainable way to ensure REGN-EB3 is available quickly wherever the next Ebola outbreak flares up.

"What we would like to see is an international stockpile for needs in Africa," he says. "One that may not rely necessarily on the goodwill of the U.S. government to send doses but that rather could be more directly used by countries themselves."

Regeneron's Mirza says the company is in discussions with WHO about making that happen. Meanwhile, the head of emergencies at WHO, Mike Ryan, praised the researchers around the world who helped get REGN-EB3 from the lab to field trials in Congo and finally through regulatory approval at the FDA. And Ryan said it should be a blueprint for the current coronavirus pandemic.

"I think that should give us hope of what we can achieve together in COVID," Ryan says. "We have a living example [with REGN-EB3] of what can be achieved when science, industry, compassion and humanity come together."