Accessibility links
Author Interview: Steve Davis Is Optimistic About Prospects For The Very Poor : Goats and Soda Steve Davis lays out the reasons for his (relatively) rosy outlook In his new book: Undercurrents: Channeling Outrage to Spark Practical Activism.

Why A Champion For The Very Poor Is Not Pessimistic. In Fact, He's Optimistic!

Why A Champion For The Very Poor Is Not Pessimistic. In Fact, He's Optimistic! 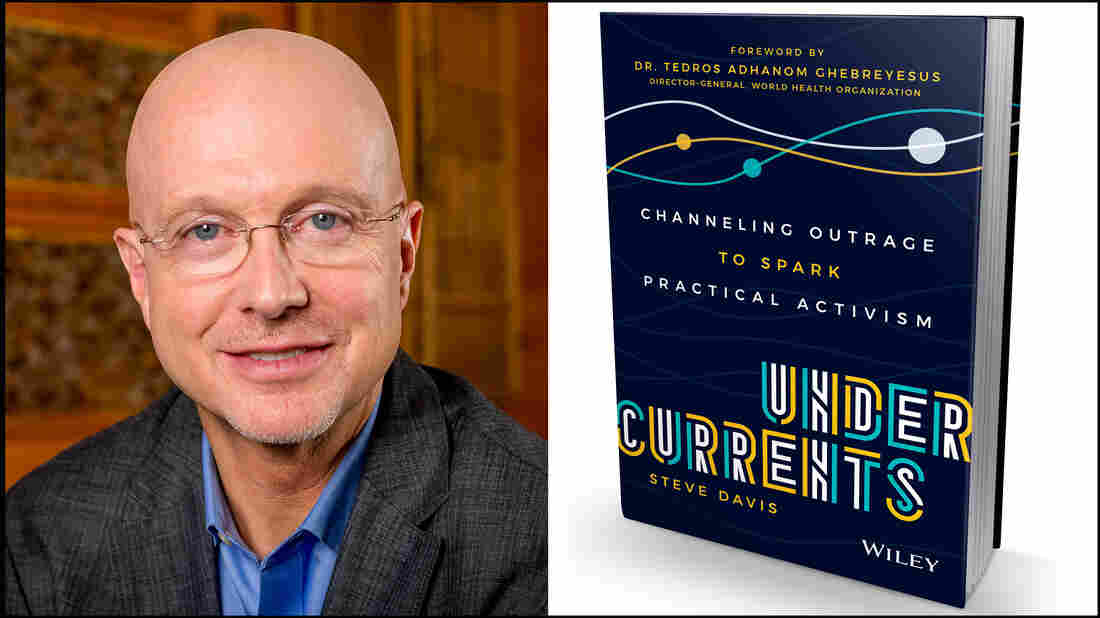 Steve Davis is a longtime advocate for the poor. In his new book, Undercurrents: Channeling Outrage to Spark Practical Activism, he writes about five promising trends that could help lift people out of extreme poverty. Portrait by Stuart Isett. Book by Wiley hide caption 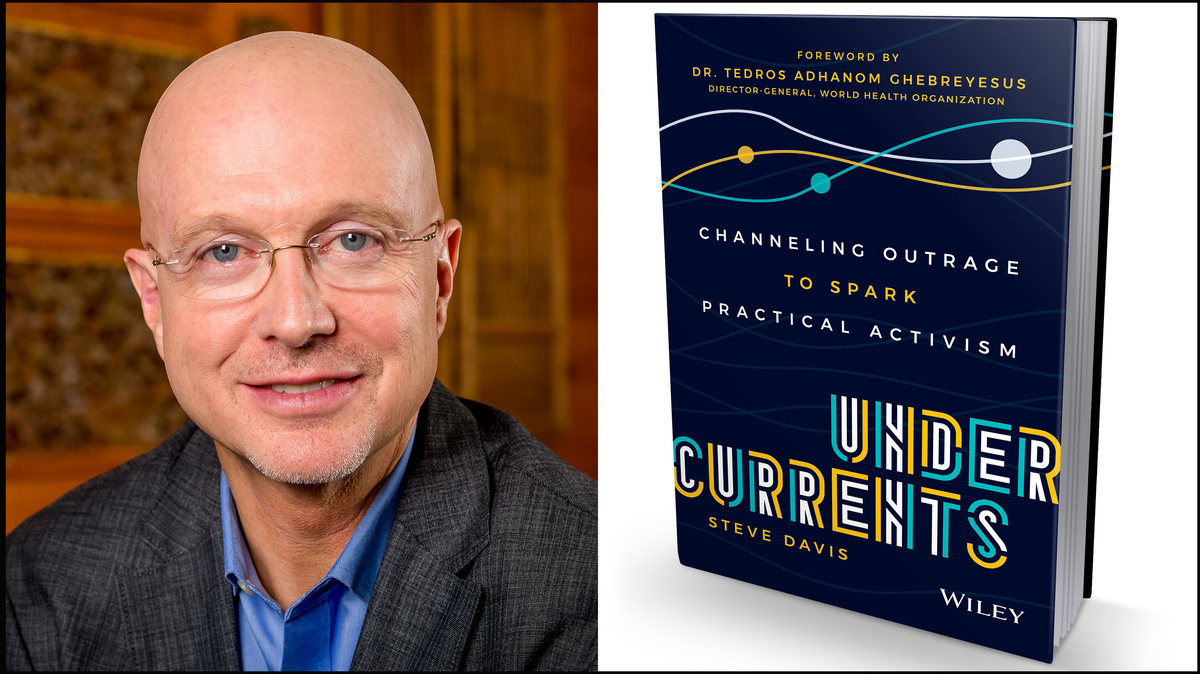 Steve Davis is a longtime advocate for the poor. In his new book, Undercurrents: Channeling Outrage to Spark Practical Activism, he writes about five promising trends that could help lift people out of extreme poverty.

When Steve Davis considers the prospects of the world's poorest citizens he is filled with .... hope. The reason: Five promising trends that, he says, are gaining steam even amid deeply worrisome developments that get much more attention.

That's not to say that Davis, a longtime advocate for the poor, minimizes the challenges, which, he notes, include rising income inequality, climate change, conflicts that have created unprecedented numbers of refugees and most recently the coronavirus pandemic and its economic fallout. But Davis says the five positive trends — he has dubbed them "undercurrents" — are arguably just as powerful, if not more.

"They're kind of under the surface. But these are things that should give people some optimism and some courage to get engaged in the world," says Davis — who formerly served as head of the global health non-profit PATH and is currently a key adviser on health technology to the World Health Organization as well as a top official in the Bill and Melinda Gates Foundation. (The Gates foundation is a funder of NPR and of this blog.)

Davis has outlined the five undercurrents in his new book, Undercurrents: Channeling Outrage to Spark Practical Activism. Here's what he had to say about each.

1. From pyramid to diamond

For years — in fact, probably for millennia — if you were to graph the income distribution among humanity it would have looked like a pyramid: A tiny minority enjoying the highest incomes at the top, with ever larger numbers of people at each level down, culminating in the largest number at the very bottom.

But Davis points out that over the last several decades a wave of economic development has lifted hundreds of millions out of extreme poverty. Forty years ago, about 30% of people on the planet subsisted on less than $2 per day. Today that share has dropped to 10%. Meanwhile over half of the world's population has reached the "middle class," according to a report by the Brookings Institution, a Washington thinktank. In other words, now the distribution pattern of world income "looks more like a diamond," says Davis, "with the largest share of people in a fat center."

This distribution pattern does not constitute a perfect diamond, Davis hastens to add. The continued rise in income inequality means that an ever tinier minority at the top have an ever larger share of the total wealth. In fact, notes Davis, the top 1% of the world's population currently controls more than half of the world's wealth. Also, the "middle" layer where the majority can now be found is actually somewhat closer to the bottom of the diamond.

Meanwhile, the (now smaller) share who remain at the absolute bottom still comprise a huge number of people — after all 10% of humanity is still a lot of people. And because so many have been displaced by armed conflicts and corrupt governments, they face barriers to advancement that are possibly even more intractable than those confronting extremely poor people of the past.

Nonetheless, Davis says the fact that so many people have advanced out of extreme misery suggests a new avenue for helping them rise further: Now that the emerging group of no-longer-abjectly poor people have at least some disposable income they represent a valuable class of potential consumers. In other words, there is now a profit motive for private enterprises to provide people in this (still quite low income) group with the kind of health, education, and financial services that they and their children will need to get to the next level. In short, says Davis, "It means the private sector has a much bigger role in human development."

As an example of the power that market forces can bring, Davis points to a wave of "social entrepreneurs" in Vietnam who have set up for-profit clinics that now provide HIV testing. "They're very much targeted to the low-income consumer who needs these services and tools to support their health," says Davis. And, he says, the clinics have proved a particularly effective way to reach the HIV-affected gay community, a group that formal aid programs had largely missed at least in part due to government biases against gay populations.

This doesn't mean that there is no room for aid programs, says Davis. But he says increasingly aid workers' greatest contribution could be to identify and help remove barriers that are preventing private enterprises from serving low-income or otherwise vulnerable populations. For instance, "sometimes aid needs to be used to get those [social enterprises] off the ground in cases where the cost of jumping in is tricky. It can either de-risk or do the setup for those kinds of activities."

2. The rise of community-led activism

Another result of the shift toward a more-diamond shaped pattern of worldwide income distribution is that entire countries have moved up the economic ladder. In Africa for instance, 23 countries are now classified by the World Bank as "middle income" based on their income per capita. Of course, substantial shares of people in those countries remain desperately poor. But the benefit, says Davis, is that a huge share the world's poorest people now live in countries that are technically middle income — and whose governments and societies are therefore better equipped to provide assistance to their fellow citizens. This fact, combined with the improved fortunes of poor communities themselves, means, says Davis, "that there are countries around the world that have so much more agency: educated citizens, institutions that work. So increasingly we're seeing communities taking on more accountability and responsibility for their own growth."

This, in turn, has ushered in a profound re-thinking of the approach that people and governments of wealthier countries should take to aid, says Davis. "The world has moved beyond the post-colonial, post-World War II model of 'Let's go in and set up all this global architecture.' There's a very big movement, which I think is super exciting, in the work of social activism and global health and development, particularly, to say, 'We've got to get away from setting the solutions for communities. The communities are going to create their own solutions. And our job is simply to support them.' "

3. More diversity and inclusion within the aid community

The new approach to aid writ large has also contributed to a growing focus on ensuring that aid organizations themselves are led by people from a more diverse range of genders and backgrounds.

"In some ways, social activism has been focused on this for years, obviously — bringing different communities forward," says Davis. "But increasingly [the aid world] is actually shining its spotlight on itself to say, 'We've got to not only advocate for equity for [aid recipients] but for us as well.' "

As a white American man Davis says that he considers himself "the poster child" of the long-running inequities within aid organization staff. "Folks like me who are used to being in charge have to step aside," he says. "It doesn't mean we're not relevant and [we should] give up. It means that we've got to cede power and control more and more to others. And [also] confront some of our own unconscious biases and ways that we make assumptions."

On one level the explosion in the power and reach of digital technology over the last two decades is obvious, says Davis. And yet, he says, "I don't think people are thinking about what it means" when it comes to helping the world's poorest.

As co-chair of the World Health Organization's digital task force, Davis says he is continually impressed by the possibilities. "The ability to reach people remotely; to use data to understand situations better, earlier, faster; to give more power to individual consumers or patients [or students] to control their own well-being or education," he says. "It's just such a rich field of innovation and opportunity, and we're only now slowly catching up with the commercial sector."

Among the success stories he cites is an effort to eradicate malaria in Zambia. The project plugged into a program the locations where people had been diagnosed with the disease, topographical and meteorological data on the area and information on how far mosquitoes can fly. The program then used machine learning to predict where the parasite was likely to be circulating next so that populations there could be targeted with medication.

"It was really a data-driven model enabling health workers to change the way they do things," says Davis. "And it reduced malaria by 94% in that province."

But Davis also cautions against assuming every new app or other type of digital idea is worth pursuing. The malaria example, he notes, also illustrates that "it's less about the cool new gadgets sometimes and more just about the power of literally having more ability to understand the problem." Indeed, he says, one challenge is that the proliferation of new digital products has made it hard to combine the data they all collect.

"Across Africa, we've got a million different tools and systems set up. But they're not interoperable," says Davis. "They don't work together. They don't talk to each other."

Therefore, not just for Uganda, but for all countries, says Davis, the answer will likely be to put less emphasis on inventing new programs and apps, and more on harmonizing those that exist.

5. The unsexy work is becoming sexy

Of course it can be something of a slog to wade through the legal and technical weeds of who can and should own what data, and how the reporting of it can be standardized so that systems and apps can communicate with each other. But Davis takes heart in what he says is a growing appreciation for this kind of formerly "unsexy" work within the aid world.

Another example is the task of scaling up pilot initiatives so that they can be implemented on a massive level.

"People come up with all these amazing ideas, either products or services," says Davis. "And then there's always at the end of the presentation, a little asterisk down in the corner that says, 'and then we'll scale it up'-- as if that's just a no brainer. In fact, Davis says, figuring out how to take a project from pilot to scale is often the most challenging aspect of the enterprise.

"You know, who is supposed to pay for regulatory approval? How do you think about complicated partnerships? All the stuff that it takes to move those along," says Davis. "So I actually think there is a trend that we're starting to see more people realizing this has become a problem."

This, in turn, says Davis, is offering an opportunity for many more people to get directly involved in helping others climb out of global poverty. "To people who are saying, 'I'm stymied, I want to contribute. But I'm just an accountant,' this [trend] is saying, yeah, that's actually what we need," says Davis.

"We see more people saying, 'Hey, I have some skills that I can use in activism that will help people in the world. And I can do my bit.' "