Accessibility links
Polio Eradication Report: '2020 Has Been A Terrible Year' : Goats and Soda It looked as if polio would be the second human disease to be eliminated — after smallpox. But "2020 has been a terrible year," the head of the Global Polio Eradication Initiative says.

When the Global Polio Eradication Initiative began in 1988, roughly 350,000 kids a year were paralyzed by the virus. By 2016 that number had been driven down to 42 cases of any type of polio anywhere in the world.

But now cases are on the rise and expected to climb even further in the coming months. So far this year officials have tallied more than 200 cases of wild polio and nearly 600 cases of the vaccine-derived form of the disease. Most of the vaccine-derived strains of polio are in Afghanistan and Pakistan, but now these rogue strains of polio are also turning up across much of sub-Saharan Africa, Yemen, Malaysia and the Philippines.

Vaccine-derived polio is caused by remnants of earlier versions of the live virus used in the oral polio vaccine. The vaccine can be shed through feces. In places with poor sanitation, the vaccine can be spread through wastewater. Over time, the virus from the oral vaccine can replicate, regain strength and become just as virulent as the original virus against which it's supposed to protect.

And worst of all most kids born after 2016 have no immunity to the most prominent vaccine-derived polio strain because that strain was thought to be on the verge of elimination and is no longer included in the primary oral vaccine they would have received.

What's more, millions of children have not received vaccines because of conflict and lack of access in Taliban-controlled areas of Afghanistan and Pakistan plus pandemic lockdowns.

"2020 has been a terrible year and will continue to be a terrible year," says Michel Zaffran, head of the Global Polio Eradication Initiative at the World Health Organization in Geneva.

The pandemic is part of the problem. In March, WHO ordered a pause to all polio eradication campaigns to make sure vaccinators going door to door weren't unwittingly contributing to the spread of COVID-19. That order was lifted over the summer, but "as a result, 30 to 40 countries have not conducted mass immunization campaigns," Zaffran says. "During that period, up to 80 million children have been left unprotected against polio."

The fear is that with so many children now susceptible to polio, outbreaks could erupt, particularly in areas with poor sanitation where the virus can thrive.

And then there's the role the Taliban have played in stymieing vaccination efforts. "For the last 28 months, there was a ban on polio activity in the southern provinces controlled by Taliban," says Mohammedi Mohammed, head of immunization for UNICEF in Afghanistan.

"Twenty-eight months! It's enormous," he says of the amount of time that vaccinators have been barred by the Taliban from doing door-to-door polio vaccination drives. "If we continue like this, soon we will have three years of children that were born but not vaccinated. So we are building up the susceptibles for a mega-outbreak." And there's no sign that the Taliban are going to lift the ban.

The Sabin vaccine contains live, weakened virus particles from the three strains of polio, Type 1, Type 2 and Type 3. It's easy to administer — just two drops in a child's mouth. It's the original workhorse of the global polio eradication campaign and allowed health workers to wipe out the disease in many parts of the world in the second half of the 20th century. 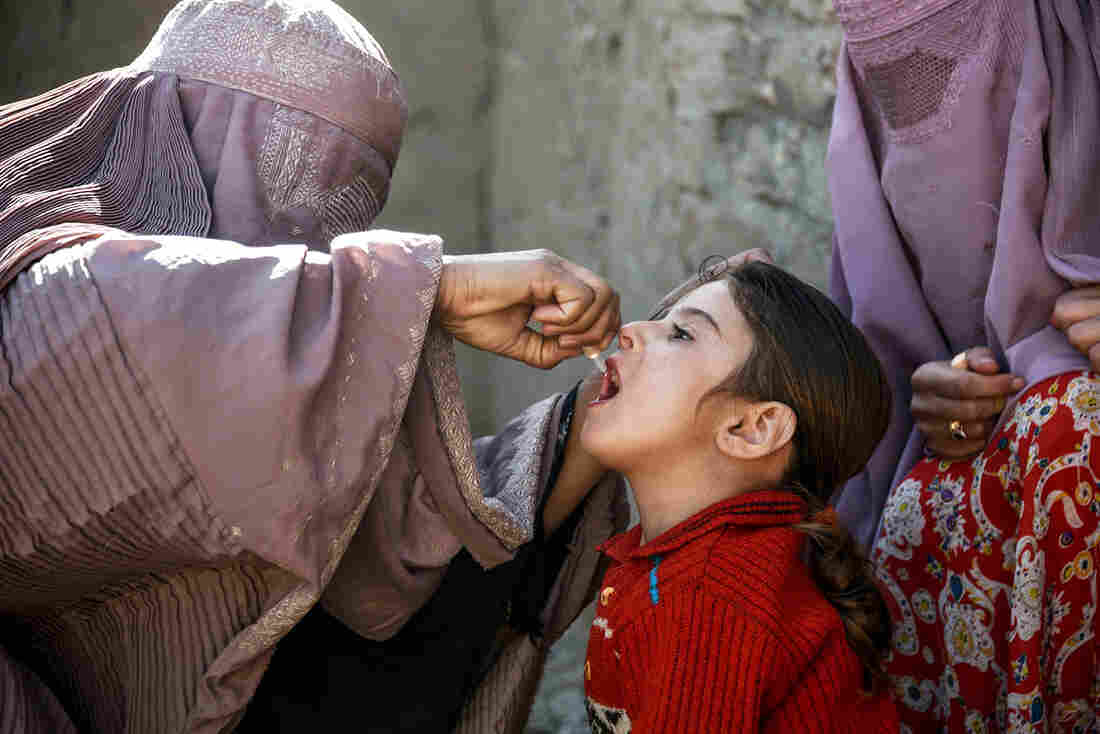 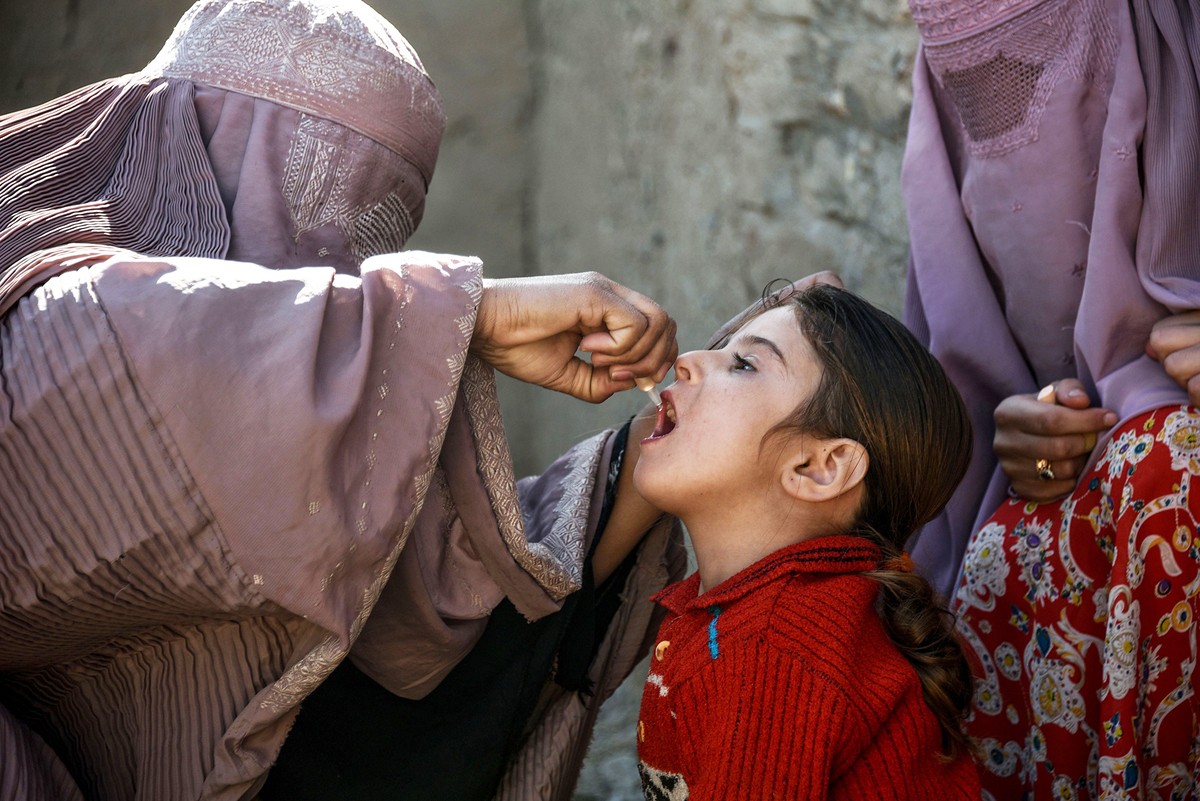 A health worker administers a polio vaccine to a child in Afghanistan's Kandahar province. Taliban opposition to vaccine campaigns have left millions of children unprotected against the virus.

But by 2016 the Sabin vaccine appeared to have outlived its usefulness. Wild forms of Type 2 and Type 3 polio were no longer found in nature. What's more, the Type 2 portion of the vaccine is the source of most of the new "vaccine-derived" strains of the virus now causing more paralysis than the original wild forms of polio. So in April 2016 the Sabin vaccine was set to be pulled out of circulation by every country in the world at the same time. The elaborate process was called "The Switch."

According to this new strategy, oral vaccines without Type 2 would still be administered in some countries – carrying out mass vaccination campaigns in which every kid has to get a shot is far more complicated than just putting two drops of the Sabin vaccine in a child's mouth.

Overall, however, low-income countries would be encouraged to start immunizing children with the injectable form of the vaccine. The injectable is known as the "Salk vaccine" for its developer, Jonas Salk. This is what's used in the United States and other wealthy nations. It protects against all three types of polio. It does not contain live virus and thus does not pose a threat of creating vaccine-derived strains of disease.

But immediately after The Switch there was a global shortage of the injectable version.

Regardless of the type of vaccine being used, the primary impediment to making polio the second human disease (after smallpox) to be eradicated is that polio transmission has never been stopped in the Afghan-Pakistan region. Every other country in the world has managed to get down to zero cases, even if some of those countries continue to deal with occasional vaccine-derived flare-ups.

Polio Is Making A Comeback

In Afghanistan the government, along with UNICEF and other aid agencies, is attempting to find new ways to gain access to Taliban areas. They're launching expanded health services at clinics in Helmand, Kandahar and Uruzgan provinces to vaccinate kids against not just polio but numerous other diseases.

"People in these three provinces are really the most underserved people of the entire country," says UNICEF's Mohammed in Kabul. "There's no water projects. There's no schools. The nutrition is a disaster."

Polio isn't a priority for the Taliban or many local residents, he says. "The community starts to say, but why do you always offer the two [polio] drops? What about the rest? I mean, we are not dying of polio. We are dying of measles. We are dying of diarrhea. We are dying of pneumonia. So please help us out."

In one of the last sanctuaries for wild polio in the world, Mohammed says the hope is that children will get vaccinated for polio — and measles and other preventable diseases — through these new basic health services campaigns.