Accessibility links
Soccer Dreams Are Strong For Afghanistan's Women Despite Taliban Opposition : Goats and Soda At the championship of the Afghan women's soccer league, players sprint across the field. Hoodie-style hijabs cover their hair. The scene was once unthinkable. But now the players face new obstacles. 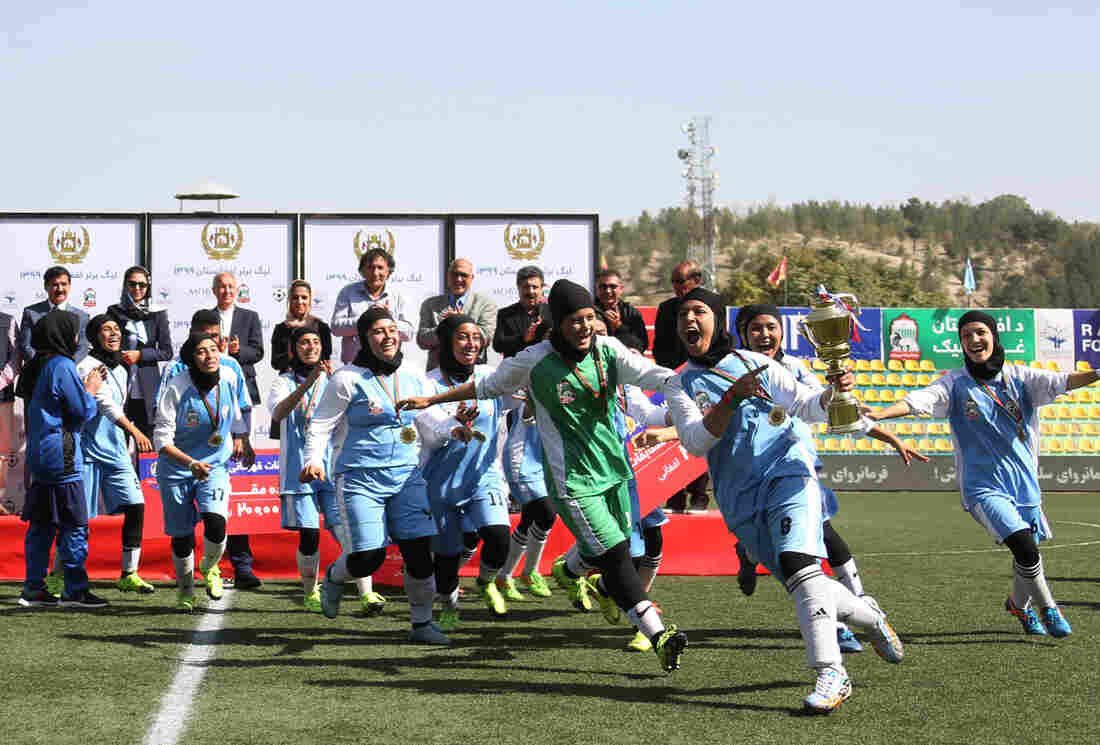 Players from the Herat Storm celebrate after winning the championship of the Afghan women's soccer league on October 16 in Kabul. Rahmatullah Alizadah/Xinhua via Getty Images hide caption 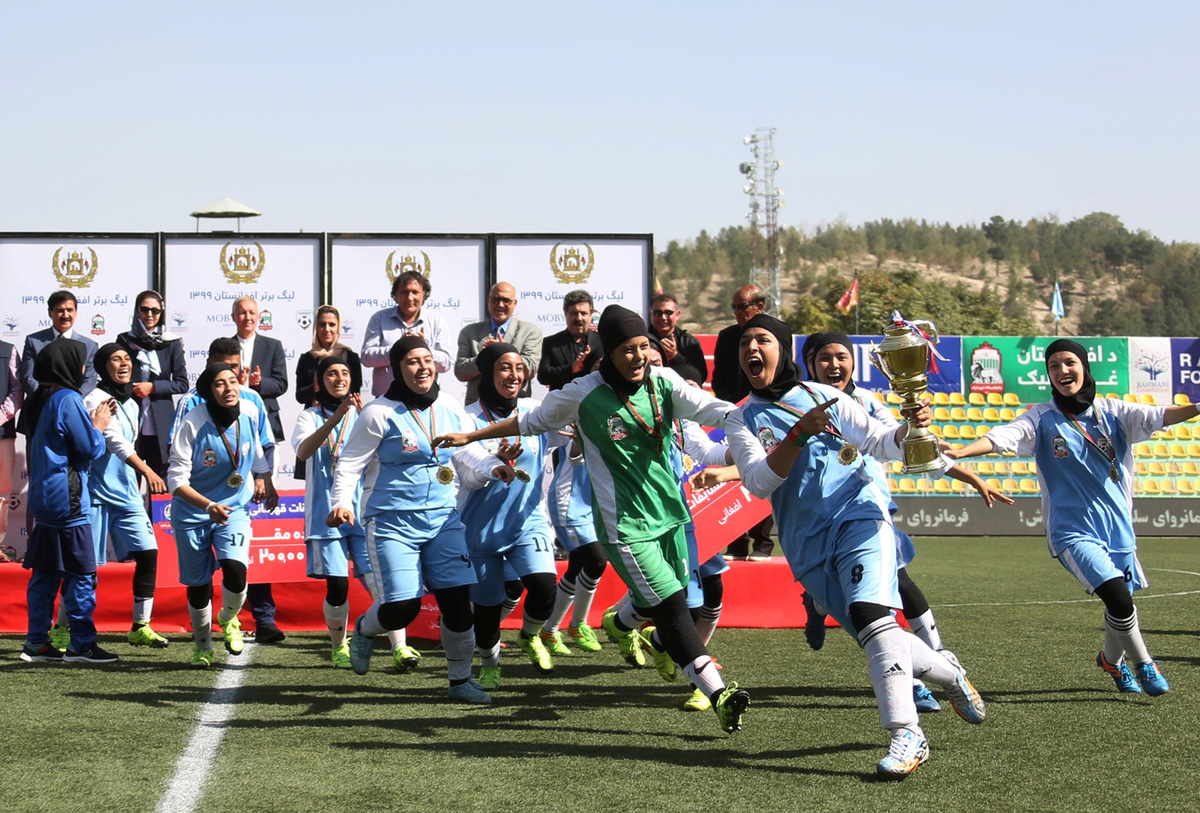 Players from the Herat Storm celebrate after winning the championship of the Afghan women's soccer league on October 16 in Kabul.

It's the championship of the Afghan women's soccer league in the capital, and the Herat Storm is facing off against the Kabul Fortress. This is a conservative country, and the players sprint across the field in long-sleeved shirts, and leggings under their baggy shorts. Black hoodie-style hijabs cover their hair.

Men and boys clump in one bunch of seats; women and girls in another, but they're feisty: hollering, hooting and banging on drums as the players kick goals.

Despite the conservative clothes and the gender segregation, this scene on a crisp fall day in mid-October was once unthinkable. It took the Taliban being toppled and nearly two decades of activism to get here.

It's even more remarkable that the women are playing in this Kabul stadium. This is where the Taliban once meted out punishments to men and women who who violated their strict rules. The punishments were so gruesome that when the stadium was renovated in 2007, contractors removed about two feet of soil to ensure people didn't play on the remains of other Afghans.

Much of this happened before the captain of Herat Storm, 20-year-old Sabria Nawrozi, was even born. But her father told her that the Taliban would "make people stand in a line and shoot them or hang them, and the bodies would dangle in the sun for days." 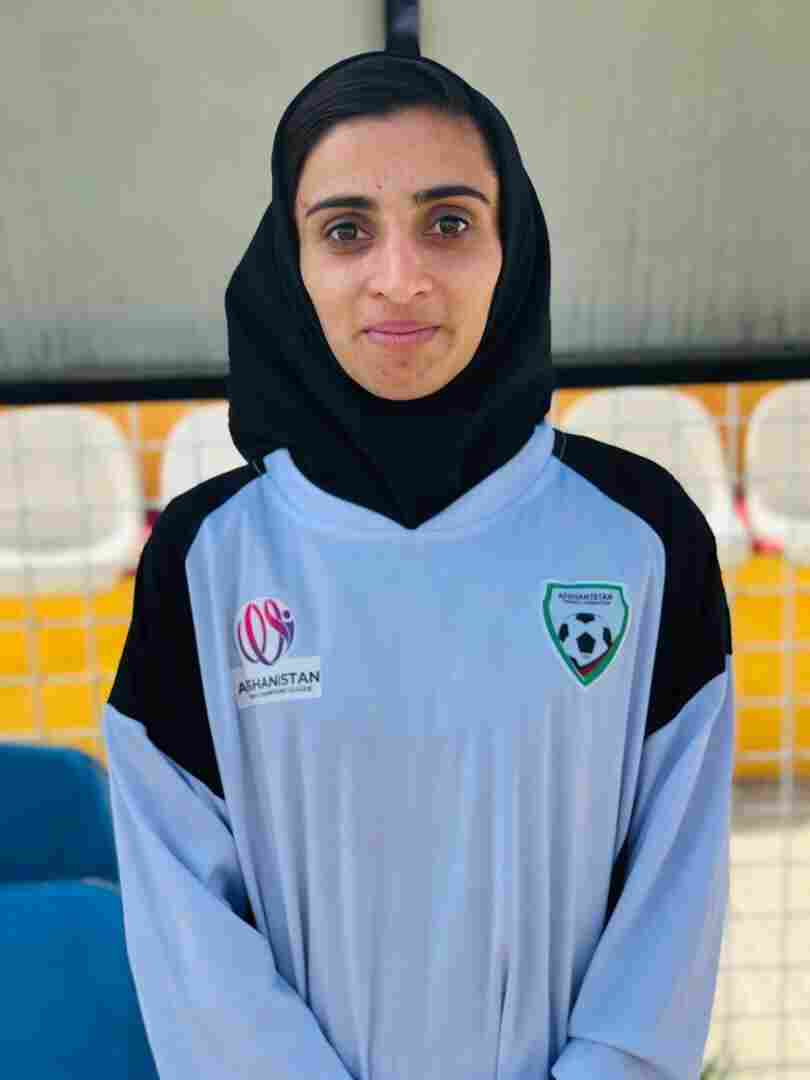 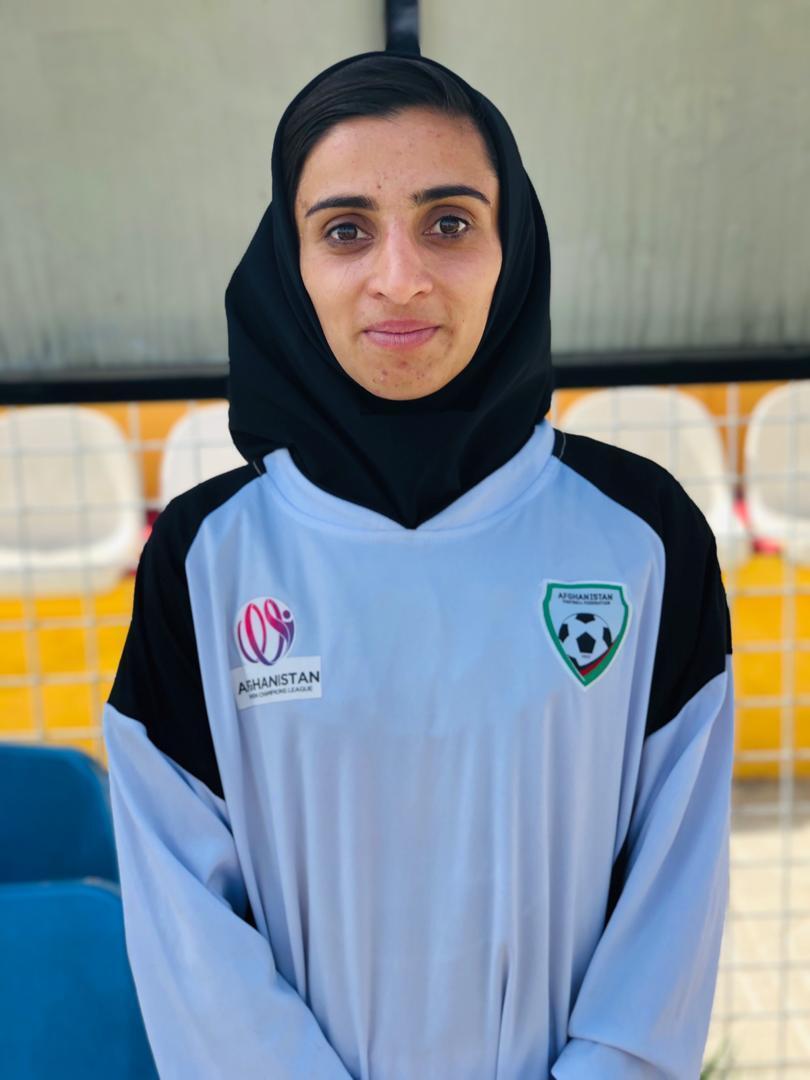 Portrait of Sabria Nawrozi, 20, the captain of Herat Storm.

She spoke at the stadium before the final match, pointing to the bleachers where crowds had gathered: "Now when I see it, it's a green place. It brings joy to people. They come to be happy and cheer on the teams they love."

And she is determined to keep playing: "If we back off because of the problems and difficulties we will never get to success." She's unafraid, saying, "I was only concentrating on my goals, and that's why I didn't have any fear."

Her father, she says, is "my biggest supporter until now, and now I have another big support who is my [fiancé]. It is a pride for me. I am happy to have them."

Fast forward to 2020: "So the idea that you have teams of girls and young women running around and screaming and jumping and kicking and hollering and hugging each other and crowds of women in the stands cheering them on is – yeah – it's exhilarating."

Getting here, though, hasn't been easy.

Take Nawrozi, the captain of the Herat Storm. She joined the soccer league when it began five years ago.

She says their neighbors used to harass her mother to ditch soccer. "They said my sports clothes are immodest. They said oh, we saw your daughter on TV," she laughs. It's shameful, in their view, because they consider it not appropriate for women to play football or be shown on the TV screen — men could see them.

"Women being in public itself, despite all the progress that we have made, remains challenging in Afghanistan," says Shaharzad Akbar, the chairperson of the Afghanistan Independent Human Rights Commission. Especially sports, because "you are basically putting on a show for people to see in a society where women are expected to be invisible in public."

For the same offense though, others threatened to kill her and the other players, says Nawruzi. "Militants threatened to open fire on the sports federation [facility]. They even threatened suicide bombings if we girls practiced or played there."

Yet Nawruzi kept playing, until the league ran out of money and shut down in 2017.

The following year, players from the women's national team accused the federation's president, Keramudin Karim of rape and physical abuse. Karim denied the accusations, but FIFA, soccer's governing body, banned him for life – and upheld that ban after Karim appealed it.

Khalida Popal, once a program manager for the team, helped bring attention to the case. She says the women risked their lives to come forward. Following the scandal, she says the Afghan government felt pressured to restart the league, to show the international community they were taking women's sports seriously. "Thanks to those amazing heroes," she says, "and because of their powerful voices, the women in Afghanistan, in football, are receiving such attention."

Some of the girls now are pursuing big ambitions, like Adiba Ganji, who plays for Kabul Fortress. She's just 16 but hopes to play one day for the national team, and even for a European club.

Her mother and brother used to be against her playing football. Then her father was wounded in a suicide bombing in their hometown of Ghazni four years ago. He lost his eyesight and his hearing – and his job. She had to drop out of school because the family couldn't afford the fees. But her family's fall into poverty caused her mother and brother to have a change of heart.

Now they support her ambitions: She's the bright star who may be able to pull the family up, or at least, secure a future for herself. She's already getting paid as a footballer, and if she can make it into a big club, she'll make even more.

"I want to show my mother that I can fulfill her expectations," says Ganji. "I really love football, and I want it to serve my family and my country."

But another hurdle has emerged, one the players didn't expect: peace talks between the Afghan government and the Taliban. Those talks began in mid-September, and Taliban officials have generally said women playing in public is unIslamic.

One senior official, who is close to the Taliban's negotiators, explained in a WhatsApp message to NPR in Arabic: "It is not allowed for a woman to show her body to anybody but her male guardian," he wrote. "This matter is not just something for the Taliban, it is commanded in the Qur'an," said the official, who requested anonymity because he isn't authorized to speak to media.

The players worry that the male-dominated government negotiating team will cave into Taliban demands to pave the way for a peace deal.

"What are they going to do? Say that we can only play in a burka?," asks Nawrozi, the captain of the Herat Storm. For Nawozi, this is bigger than soccer. It's about all the achievements women have fought for in the past two decades. And she says it makes her mad that the Taliban claim they act of out their love of Islam: "I wear an Islamic hijab and I play football," she says. "It's a pleasure for us to play this way, because it shows everybody that we are Muslims. That's a source of pride for us."

The day after she spoke to NPR on October 15, Nawrozi's team won the championship game in a tense penalty shoot-out, 3-2. Now, she wonders if they'll ever hold a championship like this again.