Accessibility links
How The Pandemic Is Affecting Democracy And Freedom : Goats and Soda A survey from the nonpartisan group Freedom House finds that democracy and human rights have lost ground in 80 countries — and even calls the U.S. to task. But there are bright spots.

Report: The Pandemic Is Not Good For Freedom And Democracy. But There Are Exceptions

Report: The Pandemic Is Not Good For Freedom And Democracy. But There Are Exceptions 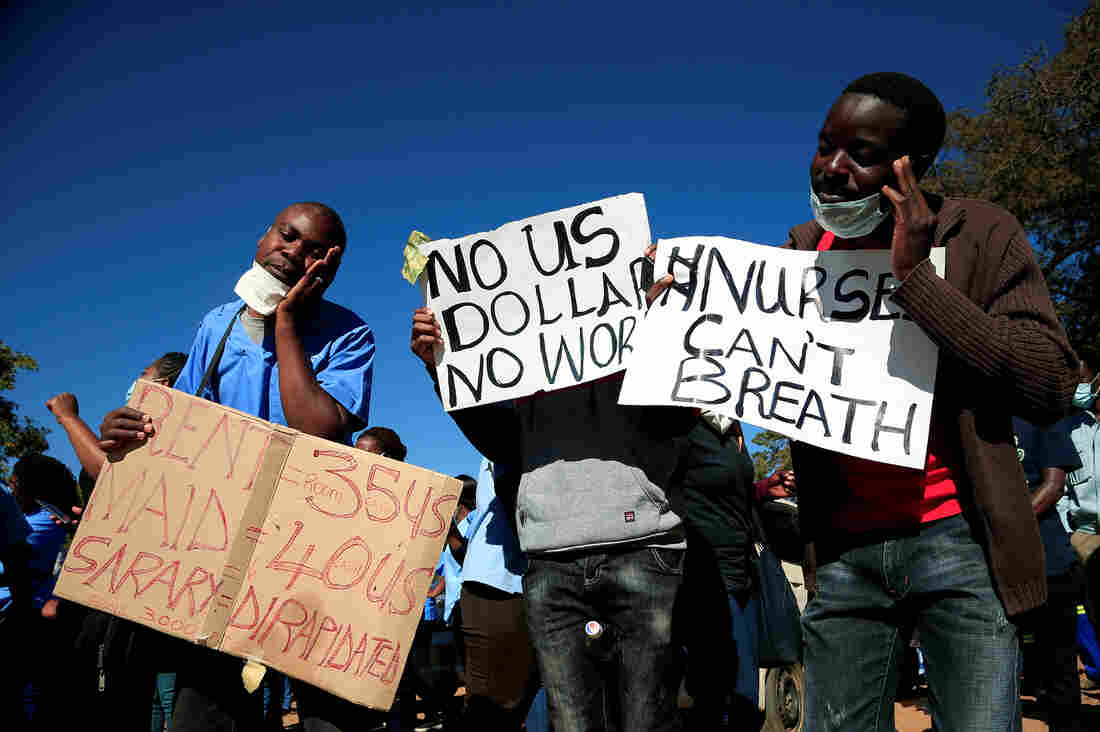 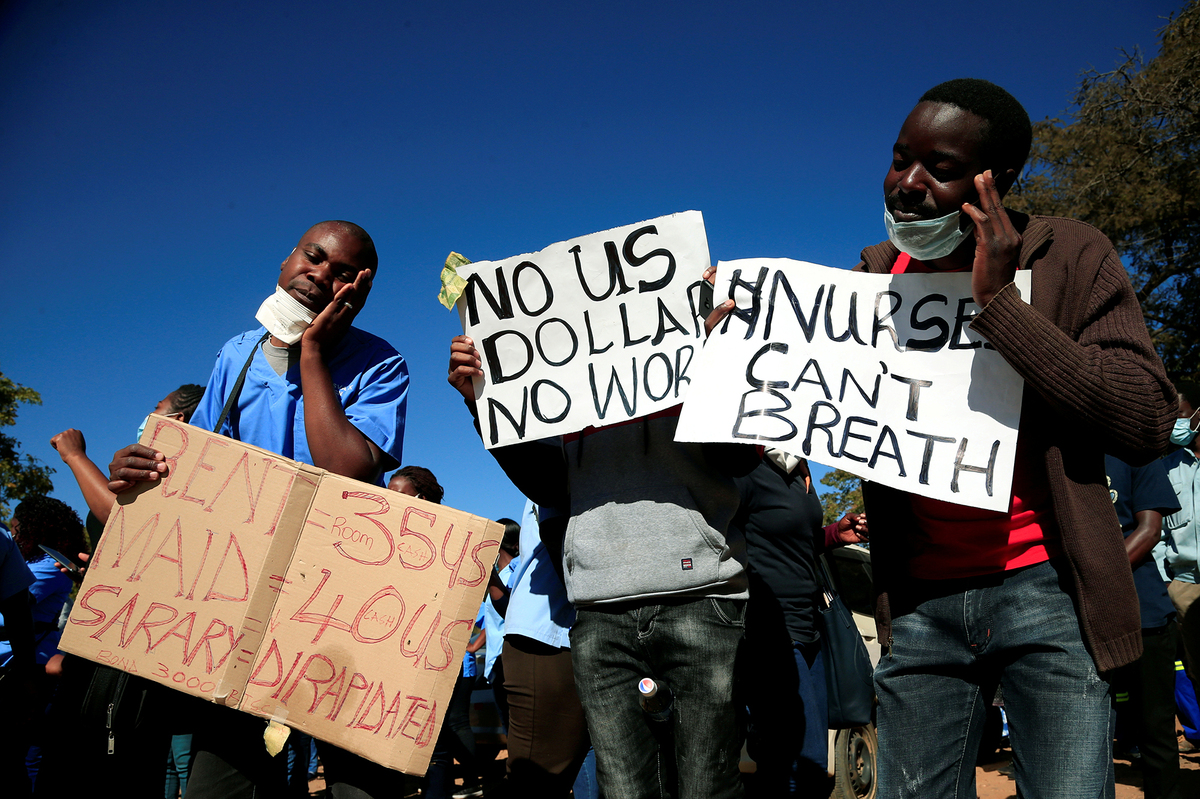 The pandemic has had a chilling effect on freedom around the globe, according to a new report from Freedom House, a nonpartisan group that advocates for democracy and whose founders include Eleanor Roosevelt and Wendell Willkie.

The notion that democracy is being "impinged upon in this pandemic is not surprising. The idea that people's freedoms are being curtailed is absolutely true and objectively verifiable and is happening," says Margaret Kruk, professor of health systems at the Harvard T.H. Chan School of Public Health, who was not involved with the report.

Certain countries show how a global health emergency can have far-ranging repercussions on the overall health and well-being of a country — but also how countries can rally and do the right thing.

The report, Democracy Under Lockdown: The Impact of COVID-19 on the Global Struggle for Freedom, was published in October in partnership with the survey firm GQR. Researchers surveyed nearly 400 journalists, activists and other experts in governance and democracy from March to September to find out how the pandemic is affecting freedom in 192 countries.

The picture looks bleak. Since the outbreak began, the condition for democracy and human rights has grown worse in 80 countries. The report points to clear cases where governments have used COVID-19 as a pretext to shut down opposition, marginalize minority groups and control information.

It is too early to say whether these infringements will persist after the pandemic, Kruk says. According to the report, 64% of survey respondents agreed that the impact of COVID-19 would have a negative impact on democracy over the next three to five years.

"I would just caution that in the middle of a pandemic, assessing something as big as the future of democracy seems a bit premature to me," she says.

Here are three highlights from the report.

According to the survey, 59 out of 192 countries saw some kind of violence or abuse of power as a result of lockdowns and other pandemic measures. "Police were using the quarantine as an excuse to beat people or forcibly take them into custody," says Sarah Repucci, coauthor of the report.

She cites cases in Zimbabwe as one of the most egregious examples. The country has been using "COVID-19 restrictions as an excuse for a widespread campaign of threats, harassment and physical assault on opposition" she says. In July, the U.N.'s human rights office received reports of Zimbabwean police using force to arrest at least 12 nurses and health care workers protesting on the street for better salaries and work conditions. According to the authorities, these protesters were breaching lockdown restrictions. In a July tweet directed to Zimbabwean officials, the U.N. said COVID-19 measures "should not be used to clamp down on fundamental freedoms, including freedom of expression and right to peaceful assembly."

Some authorities are using the virus as pretext for a political agenda that was already in place. "There have been a lot of crackdowns on minority groups who had already been a target before the pandemic, such as Muslims in India," explains Repucci. "They've been scapegoated throughout COVID-19 as being spreaders of the virus."

Indeed, in April, NPR correspondent Lauren Frayer reported that Muslims say they have faced increased discrimination, harassment and attacks in India. The violence has been fueled, victims and observers say, by right-wing Hindu nationalist TV channels, misinformation on social media and statements from ruling party politicians.

At least 91 of 192 countries had some kind of restriction on news media during the outbreak, according to the survey. "That's really an alarming figure," says Repucci. "The media is the only way that people can get information that is not just the government line. Even if the media might have certain biases in certain countries, they serve a really important role for getting people information."

In an effort to control information, governments have cracked down on the media, from preventing journalists from covering COVID-19-related press events to harassment, intimidation and arrests. The report cites examples from around the world: In Nigeria, a journalist who covered the alleged collapse of a COVID-19 isolation center was detained by the authorities and threatened with criminal prosecution on false news charges in May. In Tanzania, a journalist was suspended for allegedly reporting about a COVID-19 patient without the patient's consent in April. And in Singapore, the government is using its new anti-fake news law to take down social media posts and news stories that clash with government messaging.

One of Freedom House's measures of democracy in the report is transparency around coronavirus information. According to survey respondents, the U.S. has not been great at that. The Trump Administration has been criticized for using a number of tactics to control the narrative around the virus. This includes scapegoating, pushing unproven cures and downplaying the severity of the crisis.

What the U.S. does in this pandemic matters, says Repucci. "So many countries look to the U.S. as a model."

"The Administration's coronavirus strategy is fundamentally rooted in the bedrock objective of saving lives and helping our country – our schools, businesses, churches and other institutions – safely open and stay open .... [W]e now have more information on how to better treat patients and protect the most vulnerable through increased care, life-saving therapeutics, state-of-the-art testing, mitigation techniques to prevent community spread and hospitals that are better prepared."

Only one country reported a positive trend over the past few months: Malawi.

"They had a really bad election in 2019 — lots of fraud — and people just assumed that the result was going to stand," Repucci says. "But then it was contested and it went to the Supreme Court. And the Supreme Court actually surprised everyone with a show of independence from the ruling party and said, yes — the election was fraudulent, it needs to be redone."

In June, Malawi was successfully able to hold a rerun election, voting out the ruling party and transitioning to a new regime. It's notable that the country was able to keep its democratic process on track despite concerns about the coronavirus, explains Repucci, because half of the 22 countries that held an election this year were affected by the pandemic. According to the report, officials in seven countries moved the election date and four changed election rules, citing COVID-19.

Another country surprised Repucci: Tunisia. "The activists we surveyed were largely positive about the government response," she says. Working quickly to shut down schools, mosques and transportation, Tunisia was one of the first countries in the Middle East to contain their COVID-19 outbreak, according to a July report from the Brookings Institution, a think tank. And Tunisia's communication strategy was widely lauded for being "transparent and extensive," according to the report. The government broadcast daily press conferences on TV and the radio; it also created a website and two Facebook pages with coronavirus information.

"People felt that the government was in control and that they had instituted measures [to control the virus] that were necessary," says Repucci, "and in the process of that, the government was able to refrain from serious infringements on freedom."