Accessibility links
China Is Vaccinating Thousands Against COVID-19 With Unapproved Vaccines : Goats and Soda Although the leading vaccine candidates are not yet officially approved, the drug companies are administering them to hundreds of thousands of people. 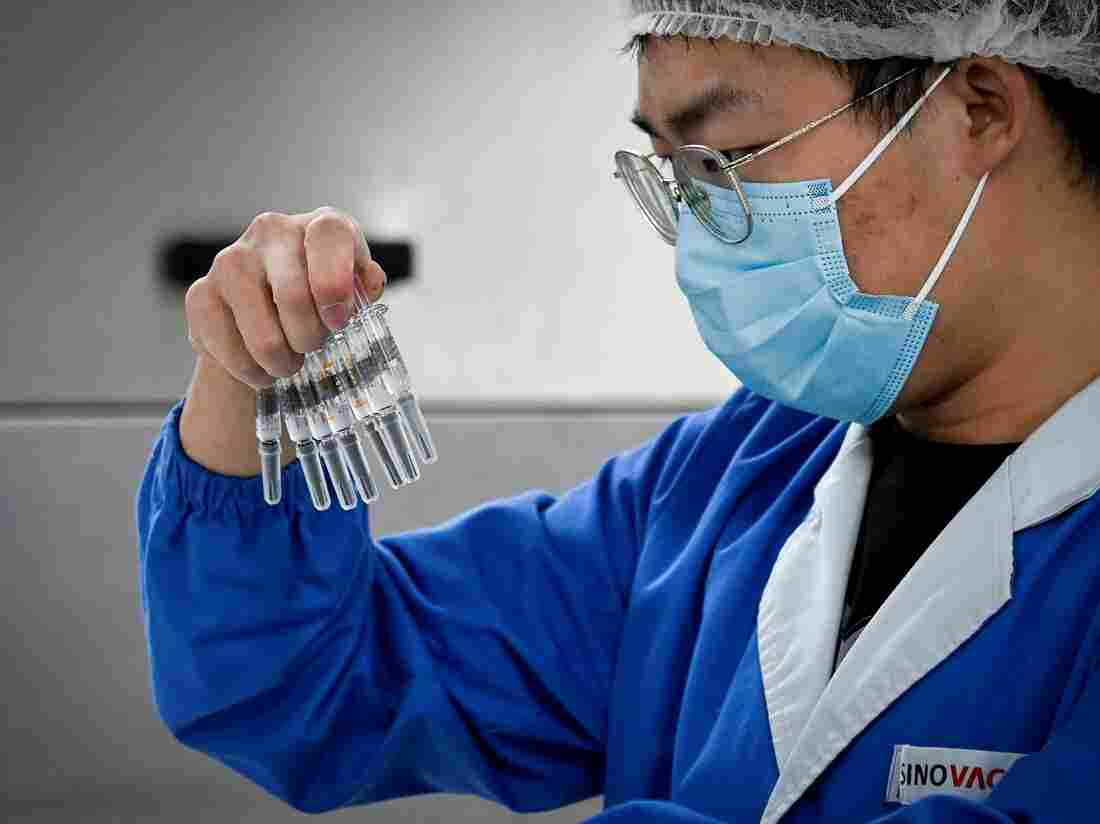 A staff member checks vaccines at a Beijing factory built by Sinovac to produce a COVID-19 coronavirus vaccine. Sinovac is one of 11 Chinese companies approved to carry out clinical trials of potential vaccines. Wang Zhao /AFP via Getty Images hide caption 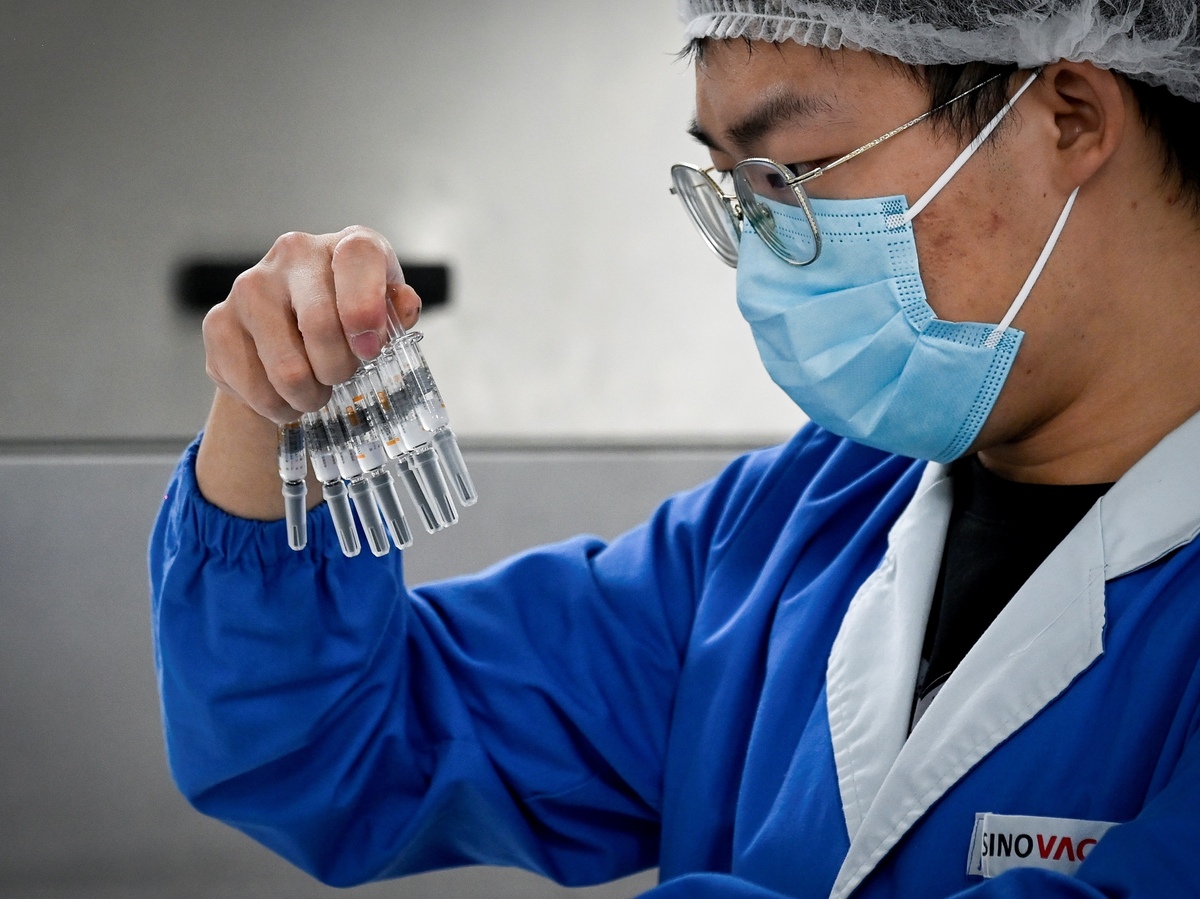 A staff member checks vaccines at a Beijing factory built by Sinovac to produce a COVID-19 coronavirus vaccine. Sinovac is one of 11 Chinese companies approved to carry out clinical trials of potential vaccines.

One early November morning, a Peking duck cook, several construction workers and a software engineer patiently lined up outside a Beijing vaccine facility, awaiting their turn to be injected with a coronavirus vaccine still awaiting regulatory approval.

As countries around the world race to develop the first viable coronavirus vaccine, China's two biggest vaccine companies have already begun inoculating hundreds of thousands of mostly state workers in a bid to get a head start. But deploying unproven vaccines carries huge risks – both for those receiving the vaccination and epidemic control efforts. The major worry is that vaccinations will give people who've had them a sense of invincibility that is not warranted – and that could help spread the virus.

A vaccine may work to prevent bad outcomes from infection, but Jerome Kim, director-general of the International Vaccine Institute in Seoul, South Korea, warns that in some cases it may not prevent infection itself. "That could mean that a person could still transmit the virus after they've been vaccinated," he said.

But among those in China given preferential access to the experimental vaccine, the unorthodox approach is a sign of China's strength — first in controlling a coronavirus epidemic, then in its ability to potentially protect its workers.

"There is no problem at all. Lots of our colleagues had the shot very early, as early as July," says Guo Peiyu, a construction worker for state behemoth China Railway Group. He is one of hundreds of workers being sent to the Democratic Republic of the Congo this month, where China Railway is building billions of dollars worth of roads in exchange for mineral mining rights.

Guo sees access to the vaccine as a perk that comes with his state job. "Your company is giving you a guarantee of safety in exchange for sending you abroad. After all, if you don't have your health, who cares how much money you earn?"

Not ready except for "emergency use"

China has four experimental vaccines developed by three companies now going through phase III human trials and safety testing before they can be approved for commercial use. Sinopharm and Sinovac, the two front-runners, have both stressed they are not ready to deploy their vaccines commercially.

"The vaccines developed by Sinopharm are in the final sprint, the last kilometer in a long march," said Liu Jingzhen, the company's chairman, said at a government press conference in October.

In reality, their vaccines had already been deployed months earlier this summer for "emergency use" and shot into the arms of people that China deems vulnerable to COVID-19, including front-line medical workers and critical service providers in large cities.

Sinovac has already set up several vaccination sites in China's coastal Zhejiang province where several hundred vaccine doses each day are sold first come first served for about RMB400 ($60) in out of pocket costs. Other countries are following suit; the Philippines says it will vaccinate up to 9 million people with Sinovac's product. The Brazilian state of Sao Paolo is conducting advanced human trials for Sinovac and intends to buy the vaccine once approved. Brazilian authorities temporarily suspended the trials this month however after an apparent suicide of one of the trial participants.

"Administering the vaccines through emergency use is a very necessary measure," Zheng Zhongwei, a director at China's CDC speaking at the same October press conference, explained. "The decision to approve emergency use came after rounds and rounds of strict debate and evaluation after relevant World Health Organization regulations were fulfilled."

Global health experts say that reasoning is flawed. "There is no emergency in China, because there are basically zero confirmed cases over many months already," says Jin Dong-Yan, who researches molecular virology at Hong Kong University.

As of November, Sinopharm said "hundreds of thousands" of people have been given its two-shot experimental vaccine and none had so far developed severe side effects beyond mild pain at the injection site. Many needing to be vaccinated were due to travel abroad for work, where coronavirus cases are still mounting, health authorities said earlier, but Sinopharm said only 56,000 vaccine recipients have gone abroad.

There are other risks, too. Antibodies from new vaccines in rare cases can be found to make things worse.

"I think the second question will be around something called enhanced respiratory disease," says Kim, referring to a form of lung disease that some animals developed after getting experimental vaccines for SARS, another coronavirus that infected 8,098 people from 2002 to 2004.

Beyond health, rolling out vaccines without all the data raises other risks for China. Already, a string of quality scandals over the years has people inside the country, and out, skittish about made-in-China drugs. If something goes wrong with these vaccines, it would be a disaster.

"If they chose to do this and they ruin their reputation, that will just make things worse and no one dare to use a Chinese vaccine anymore," says Hong Kong University's Jin.

So why take the risk and deploy unproven COVID-19 vaccines when there's no immediate scientific emergency? "It's more driven by commercial interests than by the public health needs, let me put it this way," says Yanzhong Huang, a fellow at the Council on Foreign Relations.

Companies like Sinopharm will not have any pricing power once the vaccine is approved and formally rolled out; the government will control that. Right now, however, they can charge what they like – and they are influential enough to persuade the government to leave open this window.

"We tend to think that this authoritarian state is making the decisions like a coherent, centralized process, but that is not the case in China," says Huang.

So who is eligible for early inoculation? Neither China's health regulators nor its two vaccine-makers have clarified how they determine who qualifies for the vaccine.

Within China, locking in a vaccination slot is still a coveted — and limited — commodity granted mostly to blue chip state firms. Sinopharm did not respond to multiple requests for comment.

At a November health conference, Liu, the Sinopharm chairman, said among those vaccinated were "state-owned enterprise workers sent to various overseas offices, Huawei's offices in 180 countries around the world and [China's] diplomats."

Outside the Beijing Institute of Biological Products, a Sinopharm subsidiary in charge of one of its two vaccines, an NPR reporter interviewed dozens of state employees waiting for their vaccination shots. Many said they worked for state-owned companies active in the Belt and Road, a Chinese global infrastructure initiative spanning the African continent and the Middle East.

"I need the vaccine. The pandemic is so bad outside China," said Cheng Litong, a construction worker for China Railway waiting for his second shot. "Now state workers already abroad are all lining up to get the vaccine when they return to China."

But some vaccine recipients NPR spoke to in Beijing included state-employed bureaucrats and office workers with no immediate plans to travel abroad.

"The company notified us new hires had to be vaccinated, so I came to Beijing," said Xiao Nan, an office administrator at a China Railway subsidiary based in China's northern Shandong province. He says he is baffled about why he needs vaccination, because his work does not require him to leave the country. "I was told it was for safety purposes," he said, shrugging.

Others have been turned away. In October, Chinese outlets reported students studying abroad could sign up for Sinopharm's coronavirus vaccine in Beijing and Wuhan, the port city where the epidemic first began. But the registration platform was taken down the next day, and those who had signed up were notified that Sinopharm could no longer provide the vaccine.