Accessibility links
Surgeries Are Contributing To Climate Change. Can We Make Them More Sustainable? : Goats and Soda With surgical care on the rise globally, researchers worry the energy-consuming procedures will have a negative impact on the climate. But they say there are ways to make them more energy efficient.

More People Can Access Surgery. That's Great For Them, Awful For The Planet

More People Can Access Surgery. That's Great For Them, Awful For The Planet 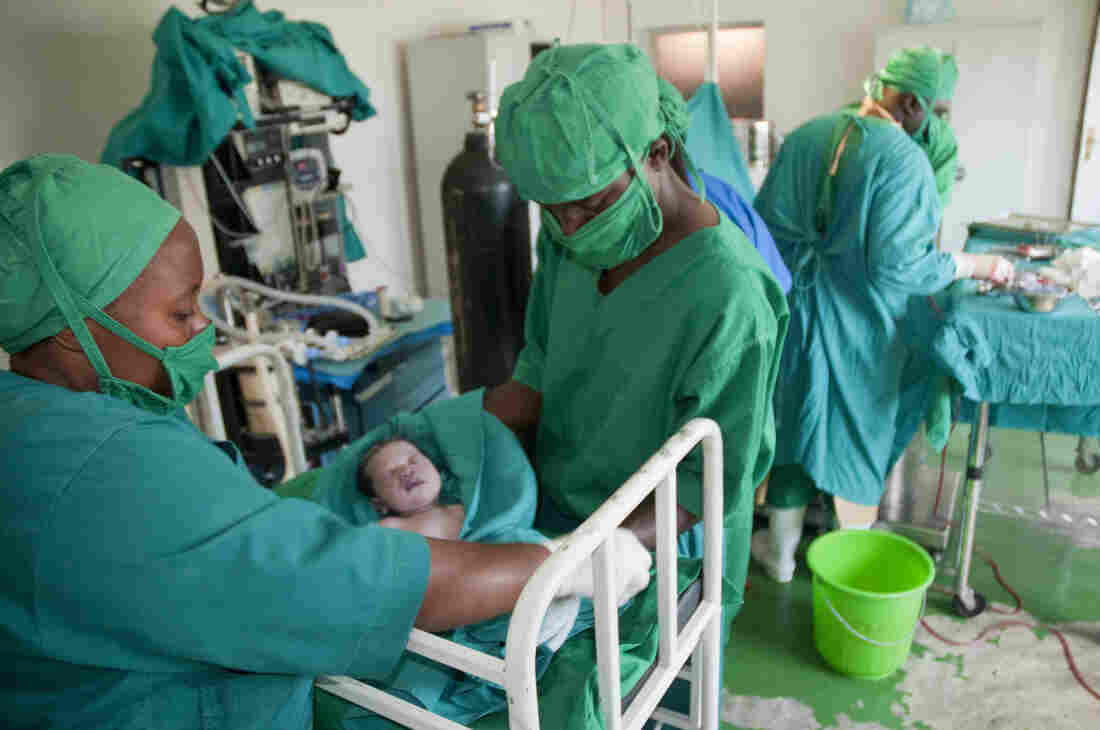 A baby is delivered via cesarean section at the Butaro Hospital in northern Rwanda. The facility is designed so that natural wind flows ventilate surgical suites, eliminating the need to burn fossil fuels to mechanically ventilate them. William Campbell/Corbis via Getty Images hide caption 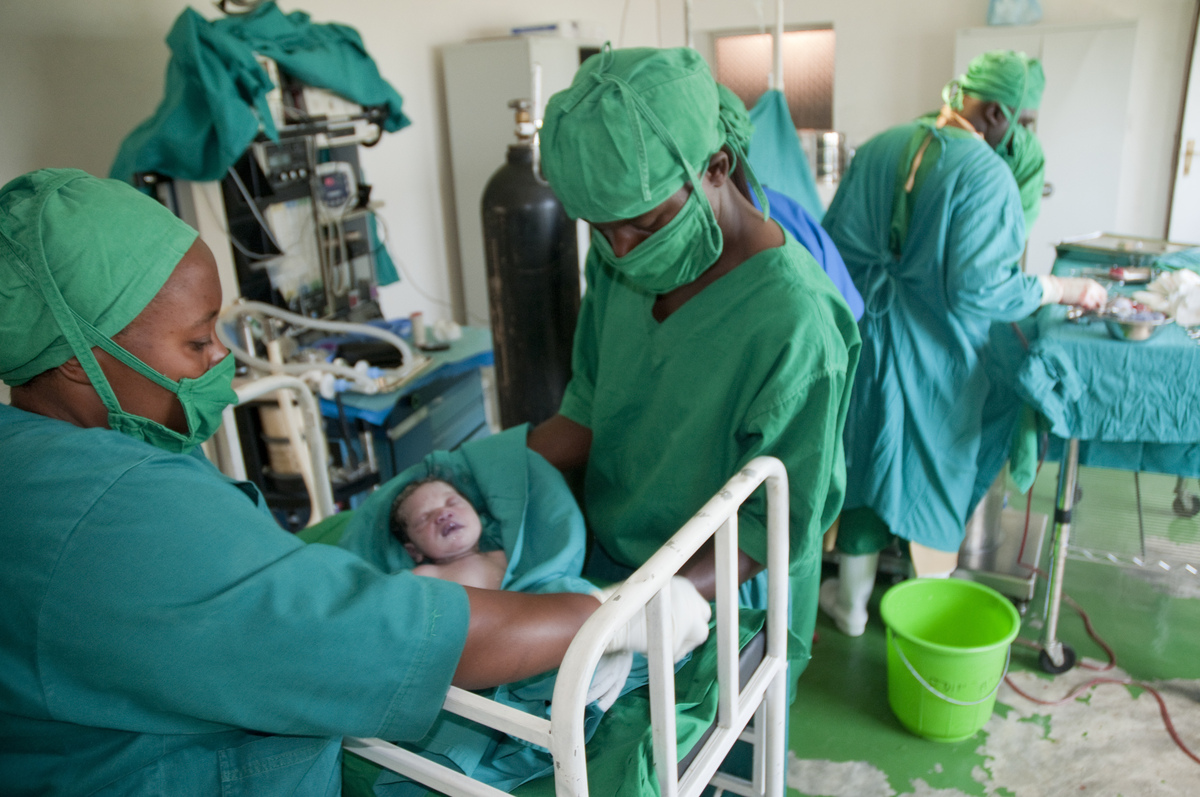 A baby is delivered via cesarean section at the Butaro Hospital in northern Rwanda. The facility is designed so that natural wind flows ventilate surgical suites, eliminating the need to burn fossil fuels to mechanically ventilate them.

Add surgeries to the list of human activities making the climate hotter and more volatile.

"Surgical, obstetric, and anaesthesia care is one of the major contributors to climate change within the health sector," according to an article published this month in The Lancet scientific journal by doctors and researchers from the Harvard T.H. Chan School of Public Health. They worry that the climate impact of current surgical practices will get worse as lifesaving procedures become accessible to the 5 billion people around the world, mostly in low- and middle-income countries, who currently can't get them.

"We do need to get more people surgical care," says Dr. Aaron Bernstein, co-author of the article and interim director of the Center for Climate Health and the Global Environment at Harvard University. "But if we do it in a model that has been developed in rich countries, it will break the climate — and we can't afford that."

Globally, health care is responsible for about 4.6% of greenhouse gas emissions, according to a 2019 report in The Lancet. A quarter of that is from the U.S., despite it having 4% of the global population.

"If the health sector globally were a country, it would be the fifth [largest] emitter of greenhouse gases," says Susan Wilburn, international sustainability director at Health Care Without Harm, an organization working to reduce the environmental footprint of health care globally.

The article zeroes in on surgical care because it's the most energy- and waste-intensive specialty in health care. Operating rooms can consume three to six times more energy per square foot than elsewhere in a hospital, according to another Lancet study. That's because heating, ventilation and air conditioning in operating rooms run on high even when no patients are in them. The article says that if hospitals ventilated operating rooms only when they were occupied, this would significantly reduce energy consumption.

Operating rooms also produce 20% to 30% of a facility's waste, by some estimates, and a third of its biohazard waste, which must be disposed of specially.

The use of certain anesthetic gases, such as nitrous oxide and desflurane, is another major source of greenhouse gases in operating rooms, according to the article. Anesthetics that are injected instead of inhaled, on the other hand, leave a minimal carbon footprint.

"The easiest thing we can do is stop wasting so much," says Dr. Jodi Sherman, associate professor of anesthesiology and of epidemiology in environmental health sciences at Yale University. "We waste a tremendous amount."

Besides wasting energy, Sherman says, there are many other inefficiencies in the health care system contributing to climate change. For example, nearly $3 billion in chemotherapy drugs were being thrown out in the U.S. annually because the single-use vials held more drug than was required, according to a 2016 Washington Post article.

Additionally, too many tools and devices are unwrapped in operating rooms to have them available in case they're needed, says Bernstein, who is also a pediatrician at Boston Children's Hospital. The packaging is discarded, as are any disposable tools, even if they aren't used, because they're no longer sterile.

Kaeleigh Sheehan with Practice Greenhealth, an organization that helps the health care industry adopt environmentally sustainable solutions, says she has experienced plenty of pushback against sustainability initiatives from surgeons and other members of the sector.

"There is still the perception that green products are more costly, when that's not always the case," Sheehan says. Additionally, some critics think sustainability practices take too much time or aren't as safe, she says. Others aren't interested in changing habits that have worked so far.

But the Lancet article warns that climate change is already having a negative effect on doctors' ability to serve their patients. Not only are diseases changing and worsening because of increasing temperatures and pollution, but climate disasters, such as heat waves, storms and fires, are also destroying hospitals, cutting off power and interrupting supply chains.

Bernstein says it's "absolutely" possible to increase access to surgical care without "breaking the climate," despite challenges. For example, biomedical devices should be labeled with their energy-efficiency ratings, like refrigerators and TVs are, Wilburn suggests.

Developing countries could also skip the wasteful, carbon-intensive practices prevalent in wealthier nations and go straight to sustainable options. Butaro Hospital in Rwanda, for example, is designed so that natural wind flows ventilate surgical suites, eliminating the need to burn fossil fuels to mechanically ventilate them. In Haiti, Hôpital Universitaire de Mirebalais is solar powered, which has allowed the hospital to operate at lower cost, without power interruptions. Power outages in the city of Mirebalais average three hours per day and are worse during disasters such as hurricanes. Another study found that cataract surgery methods in southern India — using manual, reusable tools — were cheaper and faster, produced fewer emissions and had a low infection rate compared with how the surgery is usually done in the West with an ultrasonic machine.

Why Surgeons Are Rethinking The Fly-In Medical Mission

"These are real windows into the future of sustainable health care in surgical practice," Bernstein says.

And it's something that wealthier countries can learn from.

"Sometimes wealthy countries tend to think that our approach is best," Sheehan says, "when oftentimes, there is something to be learned from countries that are working with [fewer] resources."

Joanne Lu is a freelance journalist who covers global poverty and inequity. Her work has appeared in Humanosphere, The Guardian, Global Washington and War Is Boring. Follow her on Twitter: @joannelu.