Accessibility links
Global Tips On How To Have A Happy Pandemic Thanksgiving : Goats and Soda Folks in other countries have figured out ways to hold a safe traditional celebration at a time of quarantines and lockdowns. Here are a few hacks they've devised.

From Around The World: How To Have A Happy(ish) Pandemic Thanksgiving

From Around The World: How To Have A Happy(ish) Pandemic Thanksgiving

A lot will be missing about Thanksgiving this year. It's a holiday that's celebrated on a bedrock of bringing family and friends, near and far, together for a big meal and lots of catching up, but the Centers for Disease Control and Prevention urges: "As cases continue to increase rapidly across the United States, the safest way to celebrate Thanksgiving is to celebrate at home with people you live with."

This isn't the first time the pandemic has put a damper on a traditional day of celebration. As Americans try to figure out how to mark the holiday, there are lessons to be learned from around the globe.

Collaborative Cooking – At A Safe Distance 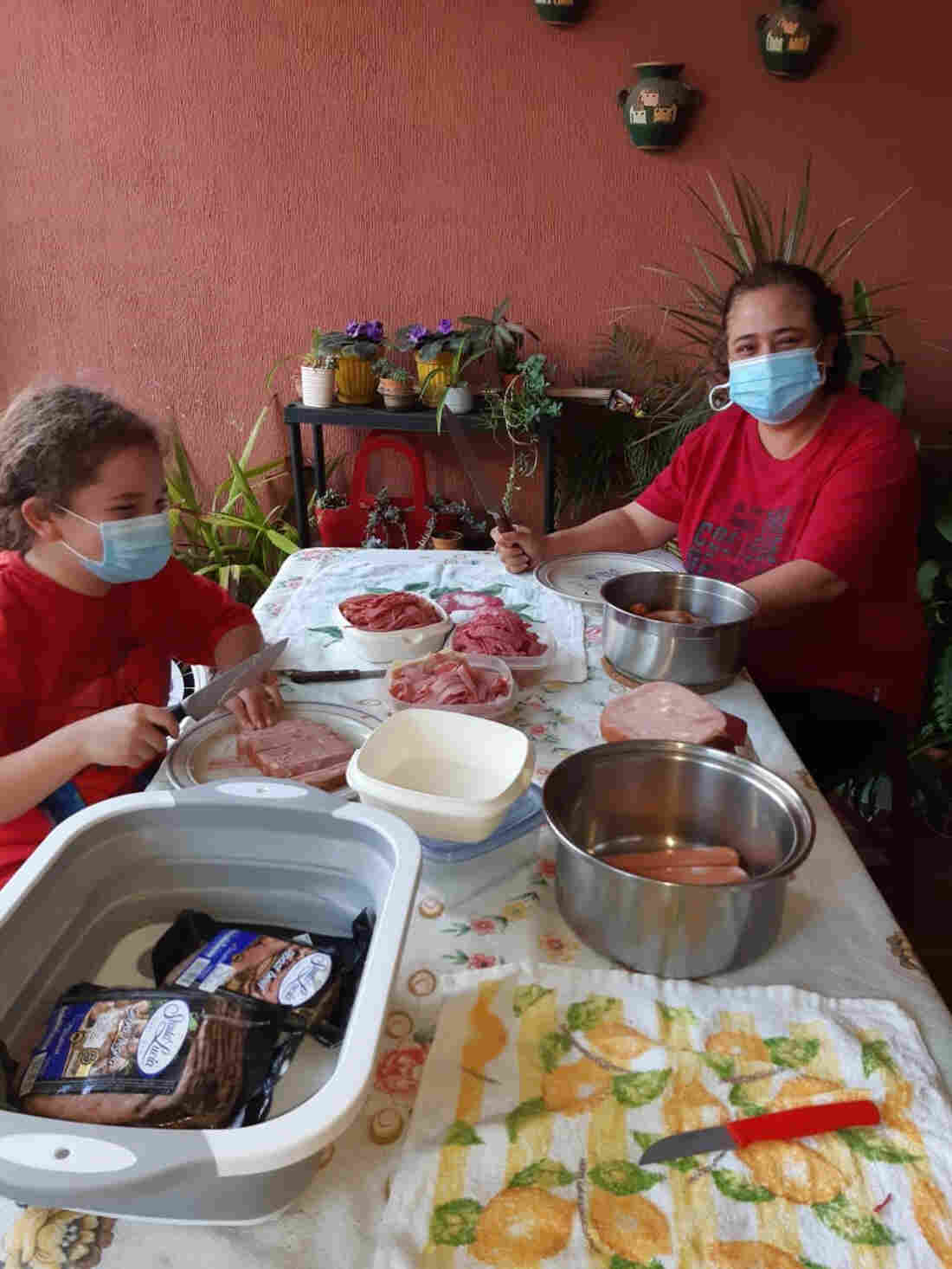 Pandemic food prep: Ana Michelle Dubon Estrada made fiambre, a traditional Guatemalan salad-like dish served on the Day of the Dead, with her daughter in her grandmother's garage — while grandmother called out instructions from a nearby doorway. Irma Lily Estrada Orellana hide caption

Her mother is in the house at the doorway to the garage, calling out instructions.

Ana Michelle Dubon Estrada and her 10-year-old daughter are in the garage, wearing masks and following the orders. Estrada is chopping cooked sausages and ham while daughter Sofia is cutting up vegetables and cheeses.

And that's how you make fiambre in a pandemic.

Fiambre is a chilled salad with dozens of ingredients served on Dia de los Muertos, a holiday to remember deceased family and friends. Making fiambre is one of the main events of the celebration. 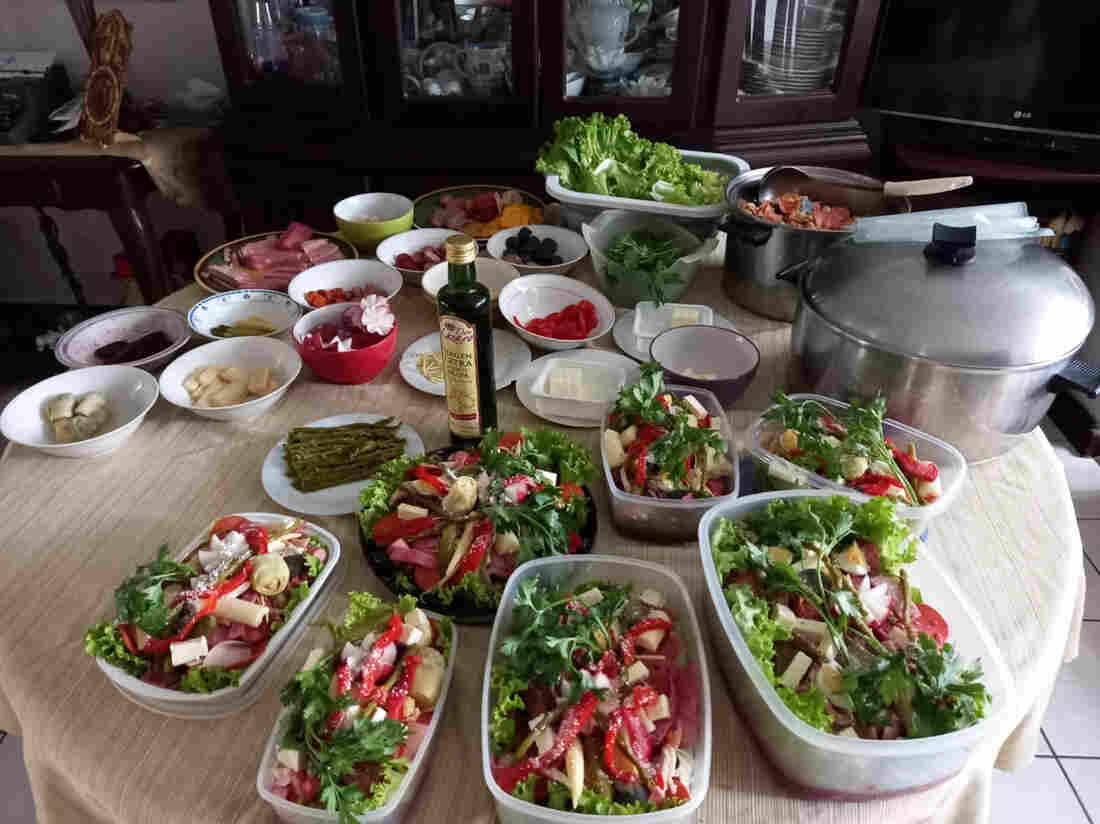 This year, fiambre was made in the garage. Family members came to pick up their share instead of coming together for a festive meal. Irma Lily Estrada Orellana hide caption 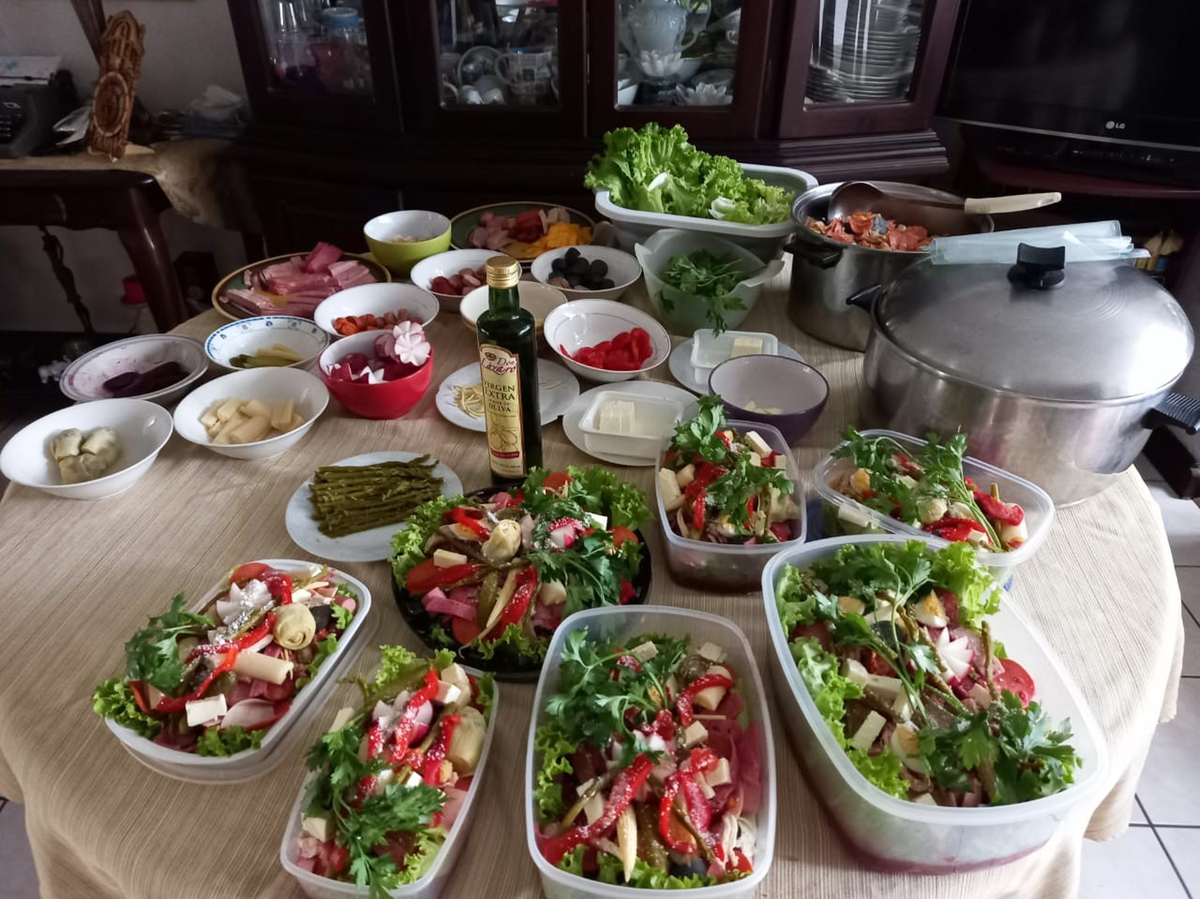 This year, fiambre was made in the garage. Family members came to pick up their share instead of coming together for a festive meal.

The aunts and cousins who usually come to chop under their matriarch's directions instead picked up their portions of fiambre from the garage to enjoy in their own homes.

"We wait for this meal all year long and one month before that day comes that's the only topic of conversation: Are you doing fiambre?" says Estrada, a gynecologist and obstetrician. "And everyone thinks they have the best fiambre in the world, but my mom's fiambre is the best one."

Usually Dubon celebrates Dia de los Muertos by taking her daughter to fly a large colorful kite, which is a spiritual symbol for bringing your deceased loved ones back to earth for one day, followed by a visit to the cemetery to decorate her grandmother's grave with marigolds and bring tamales, her grandmother's favorite food. This year the cemeteries were closed to discourage gathering because of the pandemic. Dubon and her daughter did not fly a kite.

But Estrada would not give up fiambre, her favorite holiday tradition.

She had not seen her mother in 8 months because of the pandemic.

"Fiambre was the reason why we got together again. It's not about the flavor, it's the emotion of gathering together and cooking and talking," says Estrada. "I don't know what happened this year, but that fiambre was so magical."

The Power Of A Slide Show 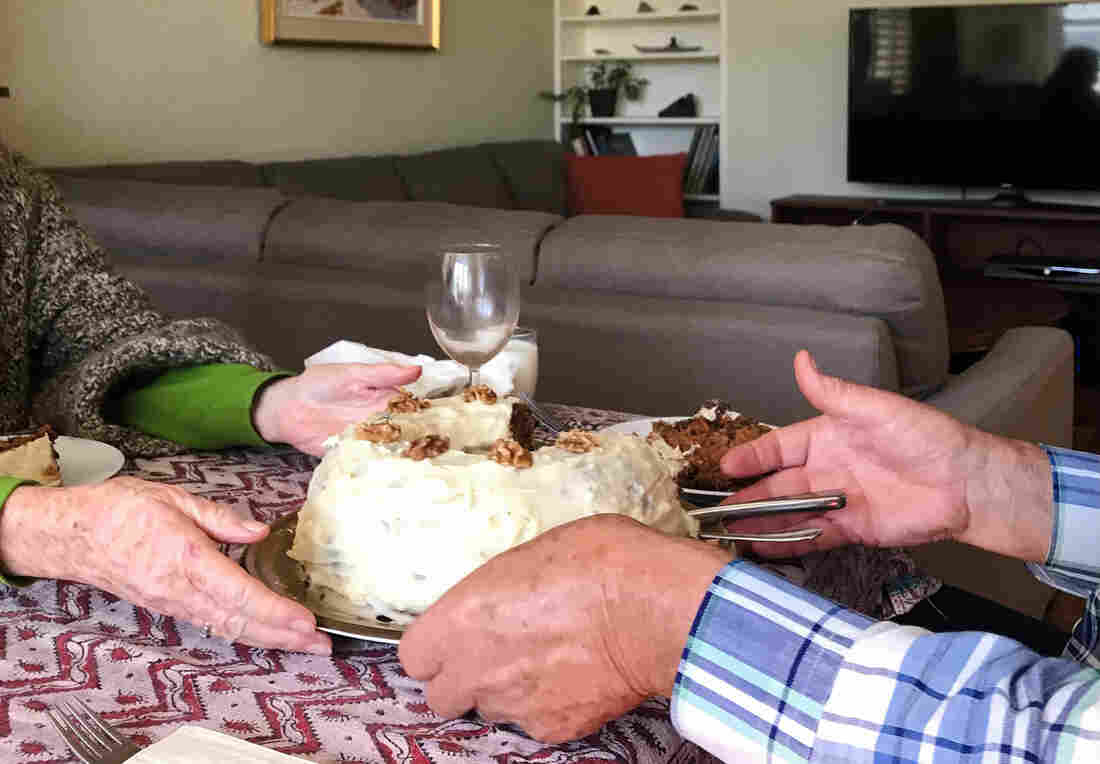 Emma Park's grandparents serve cake during a Thanksgiving dinner at their home in Ottawa, Canada. Only their daughter and granddaughter attended. Emma Park hide caption

The smallest turkey they could find was roasting in the kitchen. The guests – Emma Park, 22, her mother and her grandparents – sat in a darkened room while her mother clicked through her own childhood photographs on a slide projector and her grandmother and grandfather told stories Emma had never heard before. 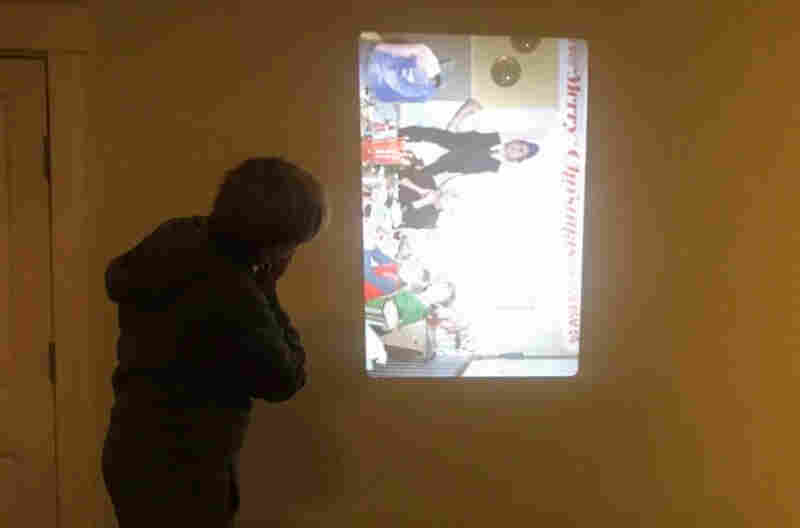 On Canada's Thanksgiving holiday, Emma Park's grandmother reminisced about family photos on the slide projector (which seems to have a sideways point of view). Emma Park hide caption

It was a sharp contrast to Thanksgivings past, when her grandparents' home was abuzz with family, from uncles in the living room watching hockey on television to cousins catching up with grandma in the kitchen.

This year, just Park and her mother came to her grandparents' house for the celebration, which takes place on the second Monday in October in Canada. They're the only ones on the usual guest list who work remotely and so weren't concerned that they could be potentially infected and contagious.

And while Park was disappointed to miss out on family connections, she says she was grateful for the chance to get to know her grandmother better. In past years, she would have been busy hosting. This year, she got to know grandma better in the more intimate setting, and that's something special she says she's thankful for this year.

She is looking forward to the next holiday despite the restrictions of the pandemic.

"My mom and I are already thinking of Christmas," says Park who was inspired by the limited Thanksgiving celebration. "We are pulling all the stops and decorating the whole house more than we usually do because you kind of need that to feel like you're celebrating the holiday because you don't have many of the other things in life."

Scaling Back Has Its Advantages 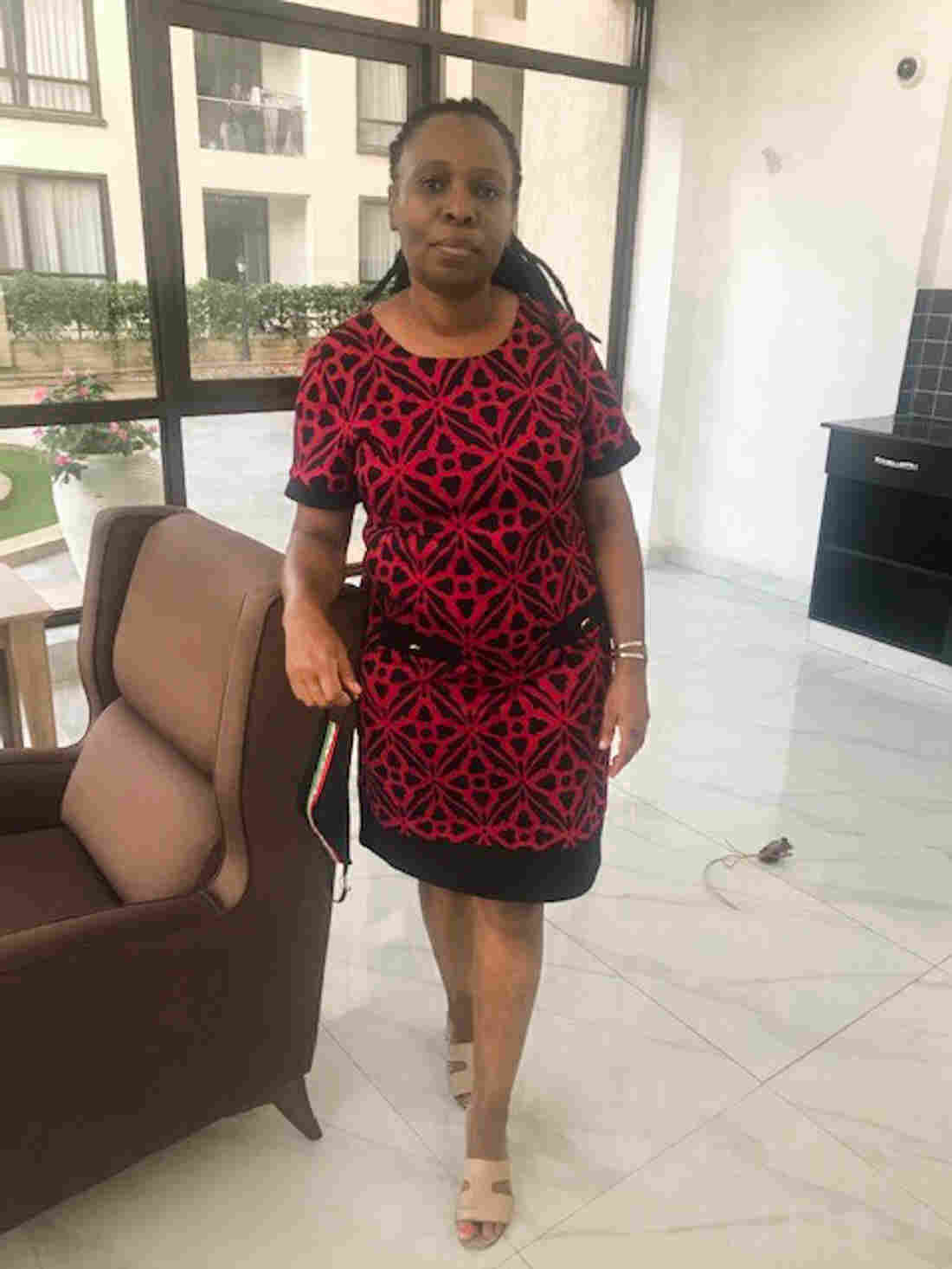 Jane Otai dressed up for her small Mashujaa celebration at home in Nairobi, Kenya. In a way she didn't miss all the typical hoopla. And in a way, she did. Stanslaus Philip Alusiola hide caption

Jane Otai found a silver lining in the pandemic.

She usually cooks a feast for 30 on the Kenyan holiday of Mashujaa, which celebrates those who contributed to Kenya's independence and years after ("Mashujaa is Swahili for "heroes"), celebrated on October 20.

This year she took it easy and cooked dinner for 3 – herself, her husband and her son. The pandemic was a great excuse to scale back, says Otai, 57, founder of Empowered Girl Initiative, a charity that helps adolescent mothers go back to school after giving birth.

"I think this is a period to relax, to look back, to just go slow and recuperate without so much activity going around me every day," says Otai. "The holidays are all together, first Mashujaa then Christmas, then New Year. Finally, I am not in a hurry to please anybody, and I don't have to deal with the holiday drama."

Instead, she stayed home, and watched the all-day holiday coverage on television of events and speeches honoring Kenyans who have made a significant contribution to the country's progress over the last year.

But she ended up missing being with her sisters and cousins and talking about their heroes over the past year. "I am not doing what I grew up doing," says Otai. And she eagerly looks forward to a post-pandemic world: "I just feel like I will value every holiday." 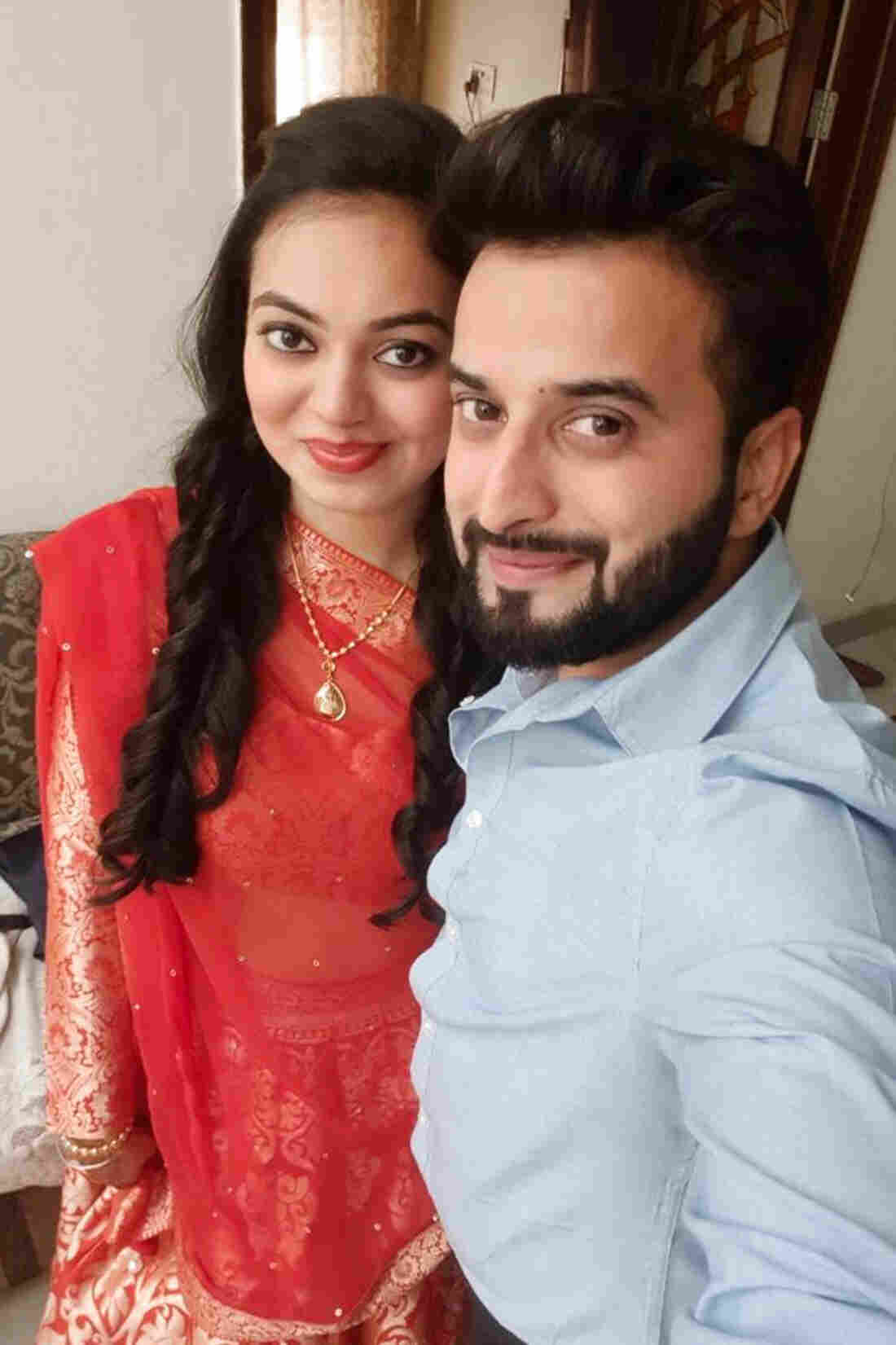 On November 13, the Mehtas and about a dozen friends met online to play card games that are a part of their traditional Diwali celebrations.

Normally, Tushar Mehta and his wife would celebrate the Hindu festival of lights by dressing up in traditional Indian kurtas and saris and zipping across town to visit relatives and friends.

But this Diwali, the couple didn't step out of their apartment in India's capital. The city is battling its biggest coronavirus spike since the pandemic began, and air quality on the weekend of Diwali was the worst in a year because of winter smog and smoke from Diwali firecrackers.

So Mehta, a 32-year-old public relations professional, came up with a work-around: The annual Diwali card games shifted to a smartphone app where you can play South Asian games like Teen Patti and Rummy. The app also lets you chat with opponents while you play.

Initially, Mehta was skeptical about how the virtual celebrations would turn out. But they exceeded his expectations.

"The level of excitement was the same," says Mehta. "There was a lot of banter, laughing and chit chat."

He and his friends have decided to make the online games a weekly ritual. The rest of their Diwali celebrations were also online. Mehta and his wife connected with friends, over Zoom, for a virtual toast. They also swapped their usual Indian attire for 1980s Bollywood costumes.

"We decided that the couple with the best costume would win a spa trip," says Mehta.

Instead of boxes of sweets usually given to loved ones on the holiday, they exchanged digital gift vouchers.

"2020 is the year of being happy with what you have rather than [thinking about] what you desire," says Mehta.

There was one annual Diwali tradition though that Mehta missed dearly: visiting the parents of his childhood friend who doesn't live in Delhi anymore. Mehta says every Diwali his friend's mother would cook her signature yam kebabs for him.

"Every year I used to go there, and spend some time with them," says Mehta. "They used to feel very happy as if their own son is there."

But Mehta didn't want to take any chances with COVID-19 this year — especially because his friend's elderly grandmother also lives there. So he didn't go, even though he was invited.

"I told them, 'The yam kebabs aren't going anywhere,' " he says. "I'll visit them when it's safe and the celebrations that day will be no less than Diwali."