Accessibility links
Big Sisters Provide A Huge Benefit To Younger Siblings, Study Finds : Goats and Soda A new study suggests big sisters have a powerful impact. (Sorry, big brothers, you don't make as much of a difference.) But there are also potential downsides for the sisters. 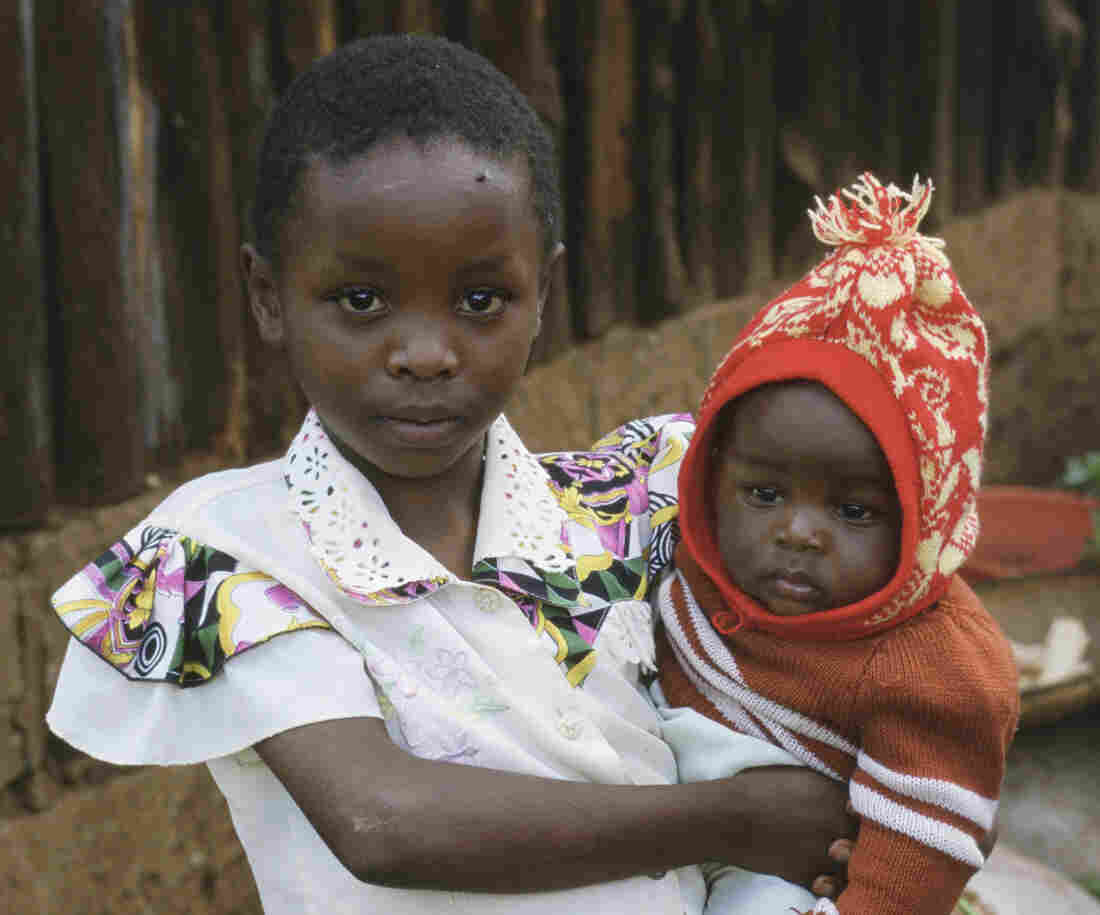 An older sister in Kenya carries her baby sibling. A new study looks at the impact of a big sister's caregiving. Wendy Stone/Corbis via Getty Images hide caption 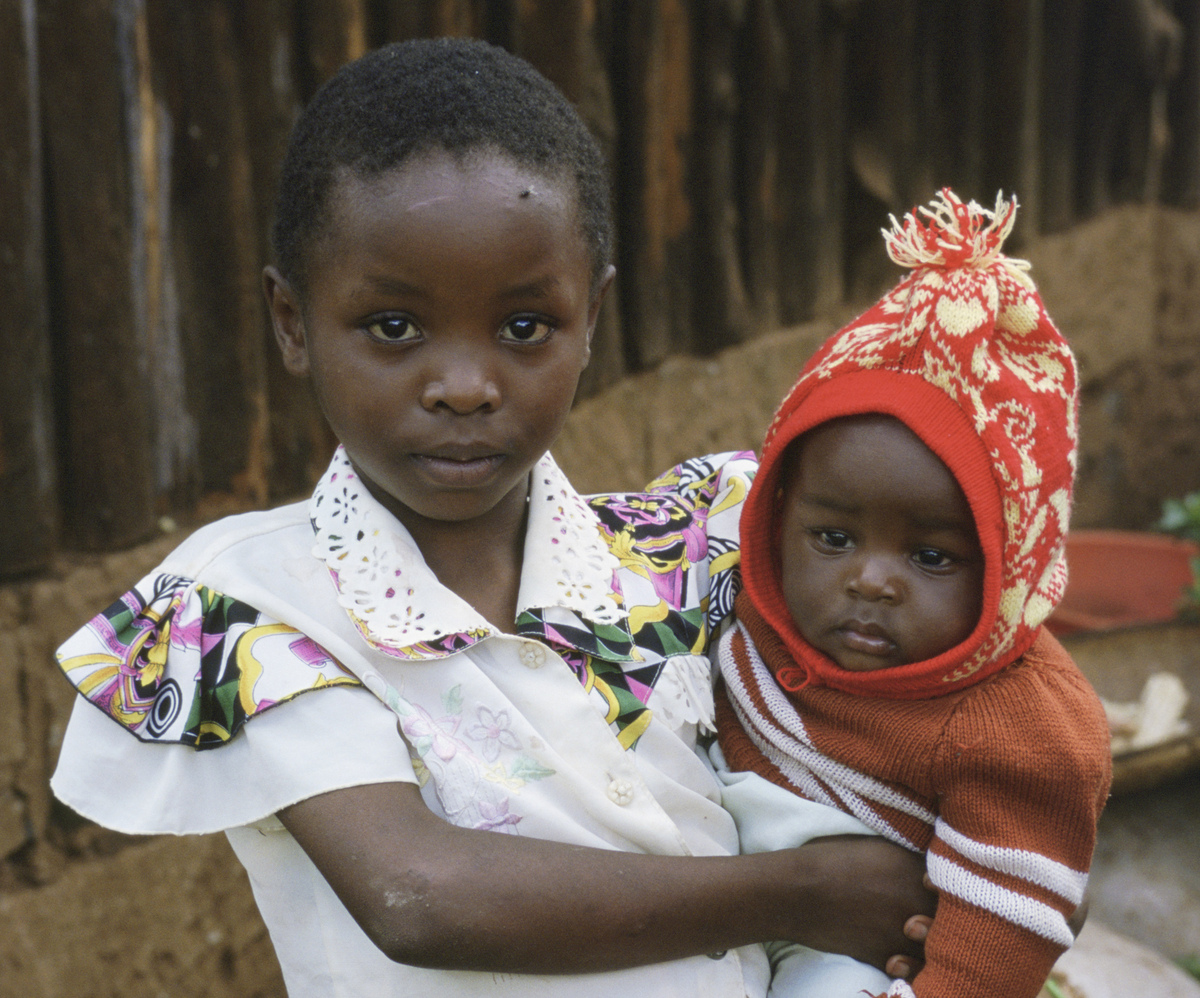 An older sister in Kenya carries her baby sibling. A new study looks at the impact of a big sister's caregiving.

Full disclosure: As someone who grew up the big sister to a brother, I have a bit of a stake in the subject of this article. It's a new study that suggests big sisters can make a powerful difference for their younger siblings.

But there's no such personal angle for the authors of the study: economists Pamela Jakiela and Owen Ozier of Williams College in Massachusetts. "No! I'm an only child," Jakiela says with a chuckle. "And Owen is an older brother."

Rather, she says, they were prompted to do the study after reading that many parents in Kenya give daughters a huge amount of responsibility when they're still very young.

"By age 6 to 8, older sisters are spending as much as half of their free time looking after younger children," Jakieka says. And that's much less common for older brothers.

Anthropologists have been documenting this difference for decades. But Jakiela says there's not a lot of economic or health or educational research into what effect these young big sister-babysitters have on the toddlers for whom they're caring.

"And so we thought that it would be interesting to compare young children who have an older sister as compared to an older brother," she says.

Jakiela and Ozier studied around 700 toddlers in a rural part of western Kenya to check how well they were doing on measures of early vocabulary and fine motor skills. Their finding, released in a working paper through the think tank Center for Global Development: On average, the toddlers with an older sister did better.

How much better? Well, Jakiela notes that researchers have long known that one factor in a child's development is how much education their mother has. And she found that for these toddlers having a big sister "translates into about the same difference we see when we compare young children whose mothers finished secondary school to those whose mothers only finished primary school."

What are the big sisters doing that's so helpful?

Jakiela and Ozier tried to answer that by coming up with a list of activities that would stimulate toddlers. For instance, Jakiela says, "having someone reading you stories, singing to you, practicing writing letters or counting with you, or doing physical play activities."

The result was that if toddlers happened to have an older sister, overall they were getting a substantial boost in stimulation. Whereas the toddlers typically were engaged in five stimulating activities over a three-day period, when there was an older sister, "we see more than a 10% increase," Jakiela says.

Jakiela cautions that this doesn't prove the extra stimulation is the reason the kids with older sisters performed better on those measures of early development. But she says it certainly suggests it's a plausible explanation.

That possibility is bolstered by other recent studies. Take one done in rural Pakistan by economist Javaeria Qureshi of University of Illinois at Chicago.

Qureshi compared girls who lived far away from girls' schools with girls who lived close by — and were therefore far more likely to attend. She found a substantial benefit to younger brothers of the girls. It appears the older sisters were helping boys with their homework. And the more educated the girls were, the more the younger boys profited.

"I find that an additional year of schooling completed by the oldest sister translates to [the equivalent of getting an] additional fifth of a schooling year for the younger brother," Qureshi says. "It's really a testament to this important role that older sisters play in raising their younger siblings across most of the developing world."

As heartening as this might seem, however, Jakiela, the co-author of the Kenya study, says it's important to consider the potential downside.

"Seen through the lens of the younger child," she says, "it's a charming story of everybody loving their older sister. But this uneven burden of care work has real costs for older girls." For instance, it often means they have less time for their own schoolwork and play.

In fact, a growing number of researchers are investigating this effect. Marcella Alsan, an economist and public health expert at Harvard University, analyzed schooling data on more than 120,000 adolescents in 38 low- and middle- income countries. She and her collaborators found that during weeks when a younger sibling in the household was sick, the older girls appeared more likely than the older boys to miss school so they could take care of the sick sibling.

Specifically when it came to attendance among these big sisters and big brothers, "the gender gap increased to almost 8 percentage points if there had been one illness episode," Alsan says. "It increased further if there were two or more illness episodes."

But Alsan has also found that this points to a way to help girls. In a separate study, looking at children in Turkey, she found that a vaccination campaign for toddlers had a positive spillover effect on their older sisters.

"This did free up girls to attain more education," Alsan says.

In other words, improving the health of toddlers — so they don't need to be cared for as much — may also be a way to help older girls.

The larger point of all these findings, the researchers say, is that policymakers need to be a lot more mindful about the potential negative effects of this unacknowledged work that so many older girls in poorer countries are doing. And to look for solutions.