Accessibility links
In Afghanistan, Mothers Struggle To Feed Their Children In Pandemic : Goats and Soda The U.N. finds that nearly half of all children younger than 5 in Afghanistan, some 3.1 million, are facing acute malnutrition. Mothers share their plight to provide the children sustenance. 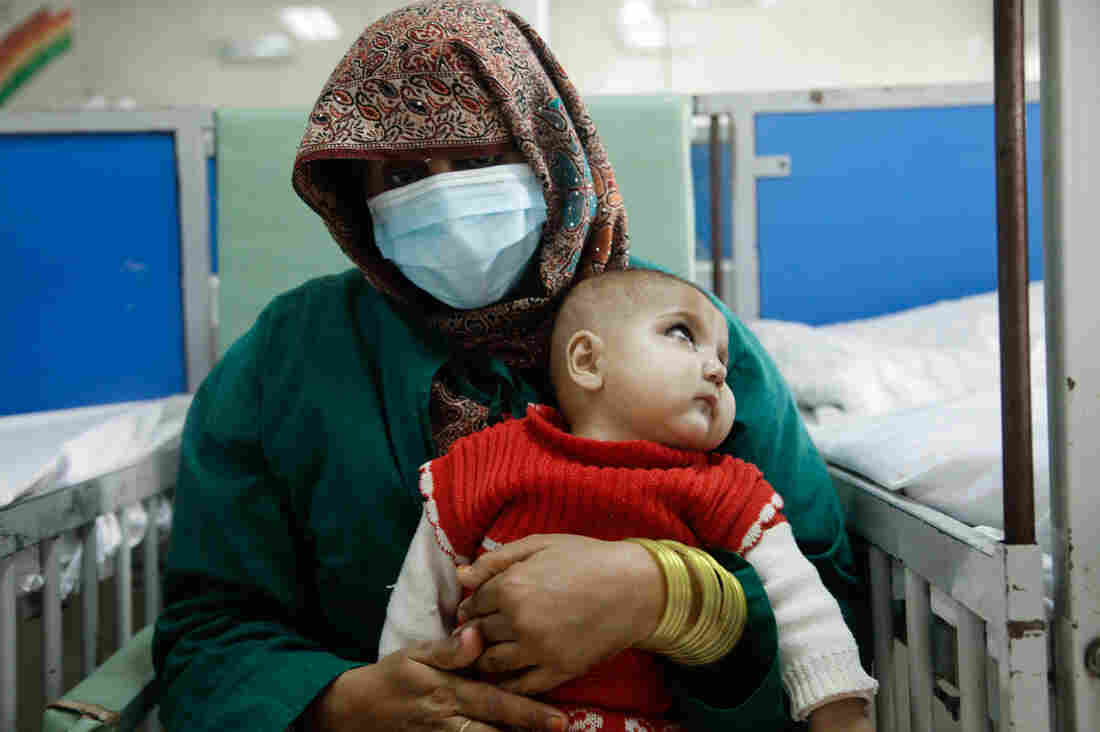 An Afghan woman stands over her granddaughter in a Kabul hospital ward for malnourished children. Parvana, just 18 months old, keeps vomiting, but she's too weak to move on her cot. So the vomit dribbles down her neck and pools into the hem of her worn velvet tracksuit.

"We didn't have enough to feed her," says her grandmother, Haji Rizva, who pats away the mess with the fringe of her scarf. She came to the hospital on behalf of Parvana's mother, who is at home and pregnant. "Sometimes we only have tea for two, three days. We don't even have bread." (The women are only referred to by their first names because of the discrimination they could face if identified.) 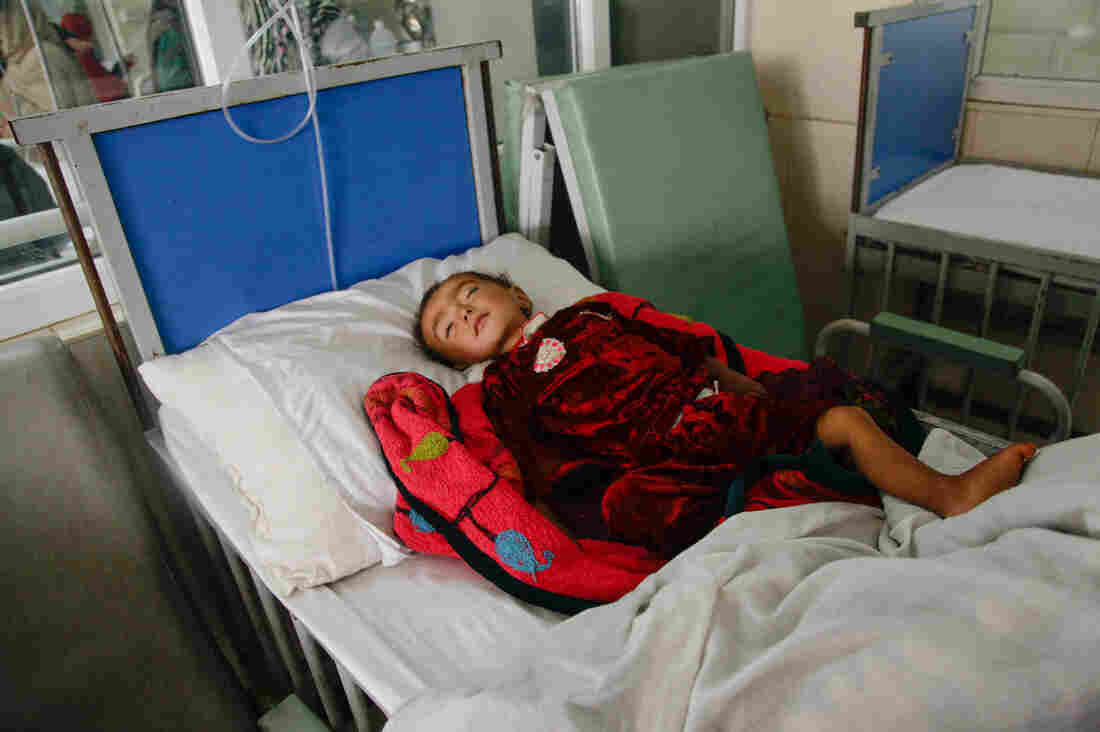 Parvana, 18 months old, lies on a gurney at a ward for malnourished children at the Indira Gandhi Children's Hospital in Kabul. Diaa Hadid/NPR hide caption

Haji Rizva says her sons can't find work. To get to the hospital, she had to borrow $8 for the taxi — a huge sum for her. The medical treatment is free, but Haji Rizva didn't know that. So she left Parvana's baby brother at home with the family. She says the boy is too weak from the hunger to move but she didn't think she could afford to treat them both.

A December report from the United Nations finds that nearly half of all children younger than 5 in Afghanistan, a total of some 3.1 million, are facing acute malnutrition. That's a 16% jump since June 2020.

Of those children, nearly a million are believed to suffer from severe acute malnutrition — effectively, starvation — and need food urgently to survive.

"COVID has actually accelerated a very difficult situation to begin with," says Melanie Galvin, the chief of nutrition in Afghanistan for UNICEF. "We've seen an escalation over the past year, even in the past few months, in estimated children in need," she says.

"We have a huge number of children that are wasted. You can call it starvation. It's synonymous with starvation," she says.

The line is thin between hunger and starvation, and Afghanistan's weak economy, dealt a blow by the pandemic closures, threatens to push more families over the edge, like Shaista's. She requested NPR only use her first name, like other Afghan women in this story. Last month, in her tiny home in a crowded muddy lane on the outskirts of Kabul, she boiled a pot of water on the wood-burning stove to make them think that supper is coming. 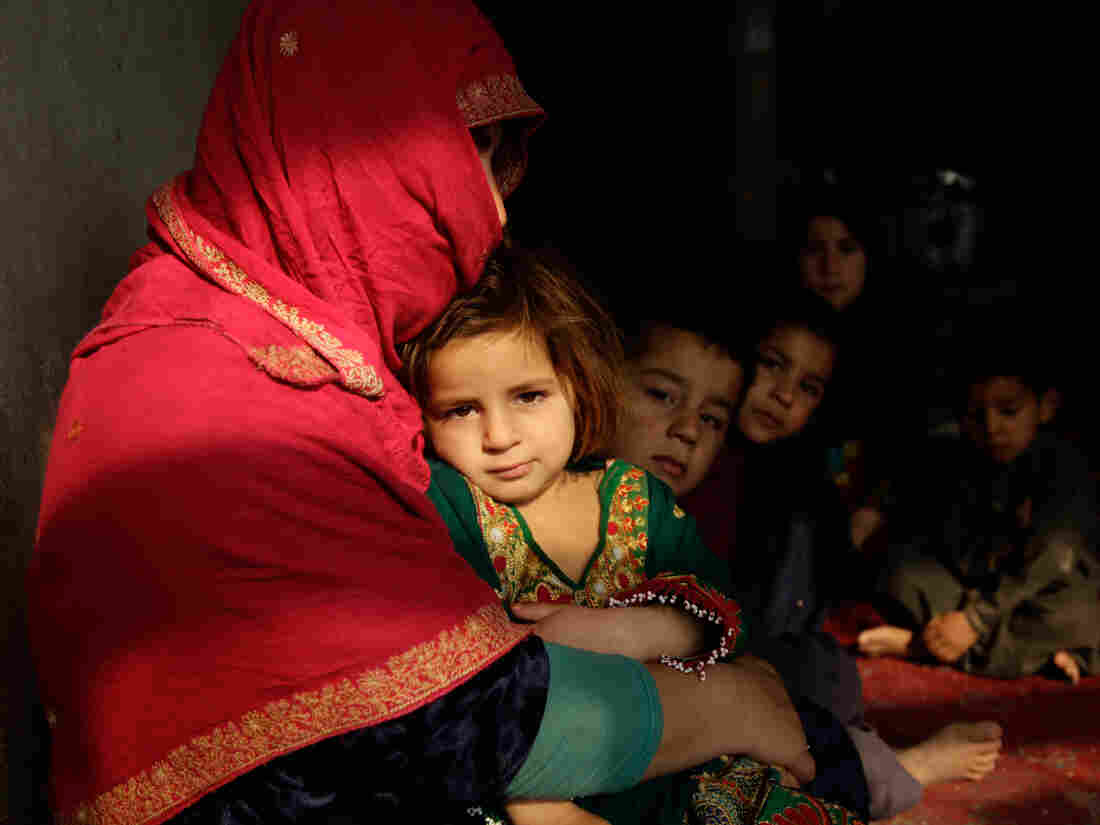 Shaista sits in her tiny home on the outskirts of Kabul. Her youngest, a 3-year-old girl, sits on her lap; some of her other seven children sit beside her. Behind them, she is boiling a pot of water on the wood-burning stove. But she's told the children it is dinner, and she tells them, "just wait for your father." Then she hopes they'll fall asleep, because there's no food to give them. Diaa Hadid/NPR hide caption 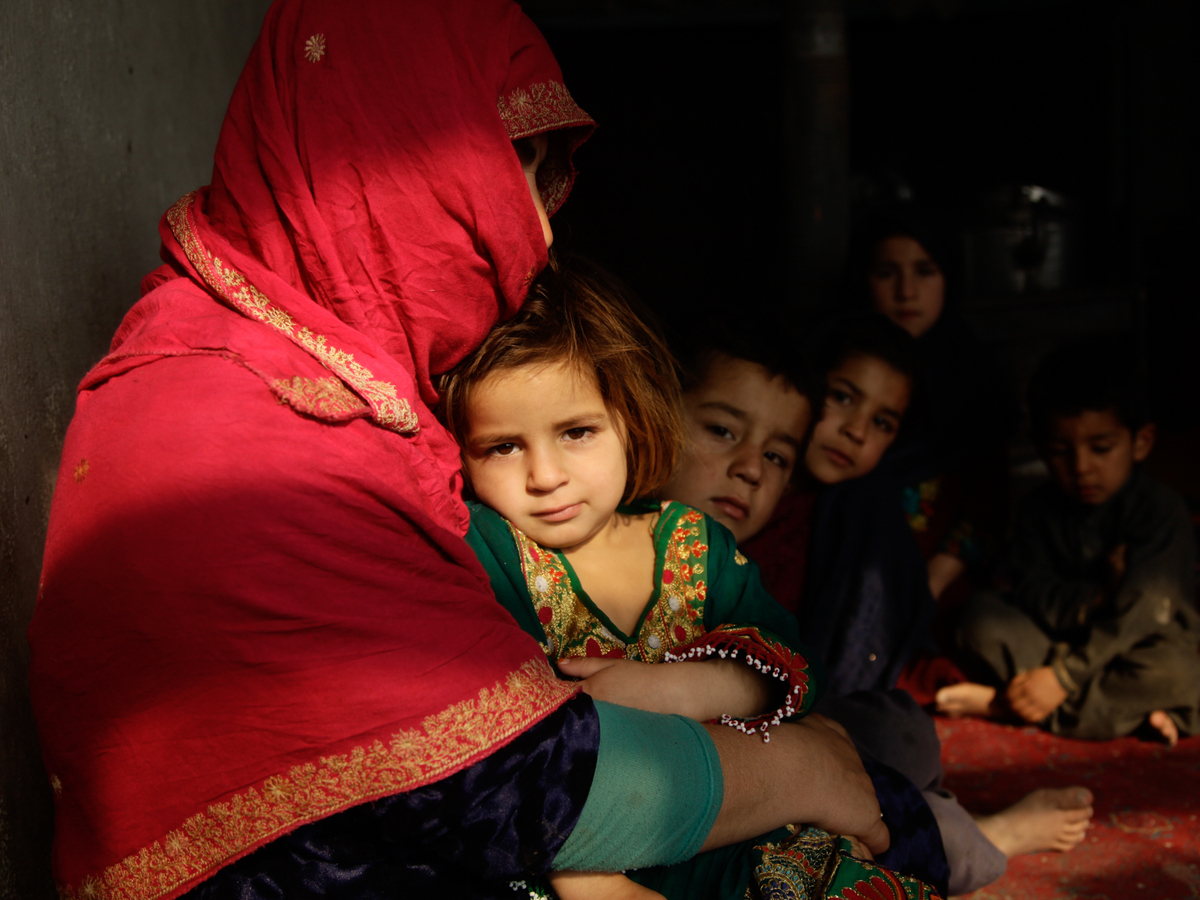 Shaista sits in her tiny home on the outskirts of Kabul. Her youngest, a 3-year-old girl, sits on her lap; some of her other seven children sit beside her. Behind them, she is boiling a pot of water on the wood-burning stove. But she's told the children it is dinner, and she tells them, "just wait for your father." Then she hopes they'll fall asleep, because there's no food to give them.

"Just wait for your father," she tells the children when they ask for food. "Then they fall asleep," she says. "I cry at night, thinking of how I can't feed them," she says, as her brood crowds around her in their one-room home. Her oldest, 15, sits protectively by the door, and her youngest, a 3-year-old girl, sits on her lap.

She estimated her age at around 35, and said of a hard life, this year was the hardest. Her husband was injured in an accident. Her son began selling firewood to support the family. But he hasn't sold much, because the pandemic hit and Kabul shut down for weeks in the spring. 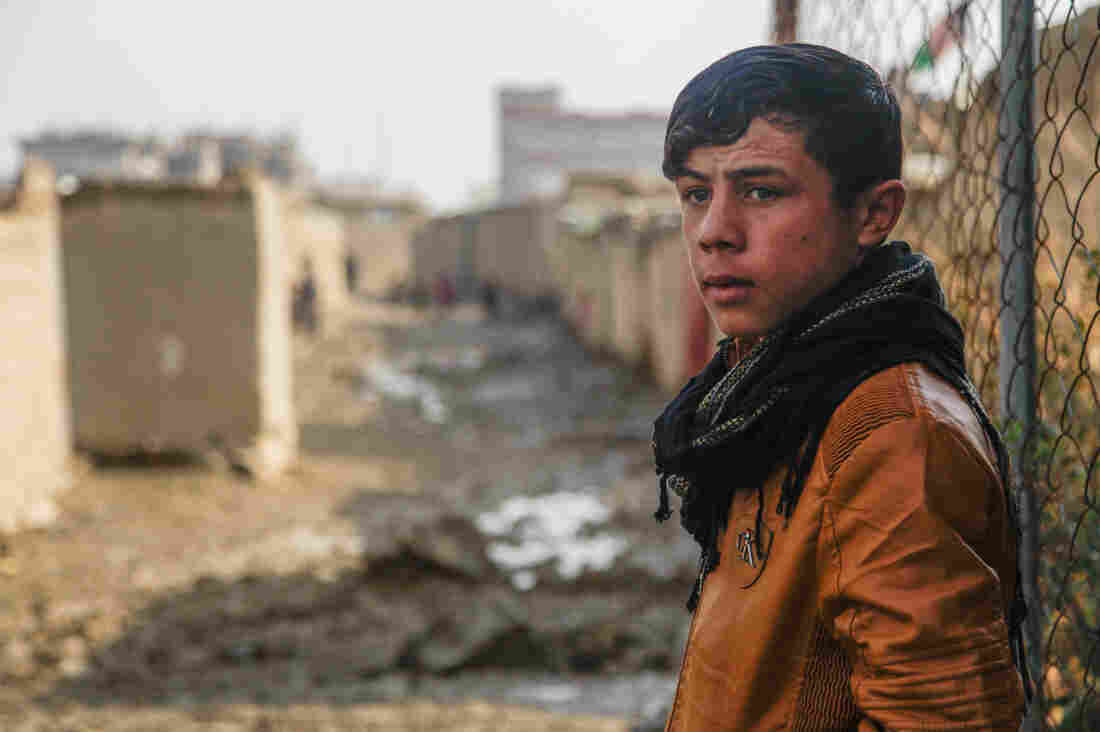 Shaista's 15-year-old son looks out onto a muddy alleyway on the outskirts of Kabul. He began selling firewood this year to help out his family after his father was injured in an accident. Diaa Hadid/NPR hide caption

"Corona made everything worse," says Shaista. The economy hasn't recovered, and her son still doesn't sell much wood.

Many other families are suffering. In a poor Kabul neighborhood, women with their babies line the stairs of a building — unmarked for safety reasons — where Care International runs a free medical clinic. Nooria, 25, waits with her 9-month-old daughter Nargis, who has a cough she can't shake.

Nooria used to be a teacher, but after the pandemic began, she says her employers couldn't pay her, so she quit. "I didn't even have biscuits and tea to feed my daughter," she says. Her husband's work as a rickshaw driver dried up, and it hasn't really picked up since the lockdown ended.

Her family eats when there's money for food. That includes her two children — she's also got a young son. "They eat when we eat," she says. "Whatever we have has to be enough."

Nooria says the nurses here counseled her before, a few months ago when they told her Nargis was malnourished."They say you have to feed her nutritious food. But if there's no money how can we feed her?"

The counseling is important, health workers say, because hunger in Afghanistan is more than a lack of money to buy food. In traditional households, men eat first, leaving women and children with the remains. That mindset particularly hurts pregnant and lactating women, who need more calories. The counselors advise women about the importance of breastfeeding and when to wean their children, and male health workers raise awareness with men about ensuring the women and children in their families eat well. 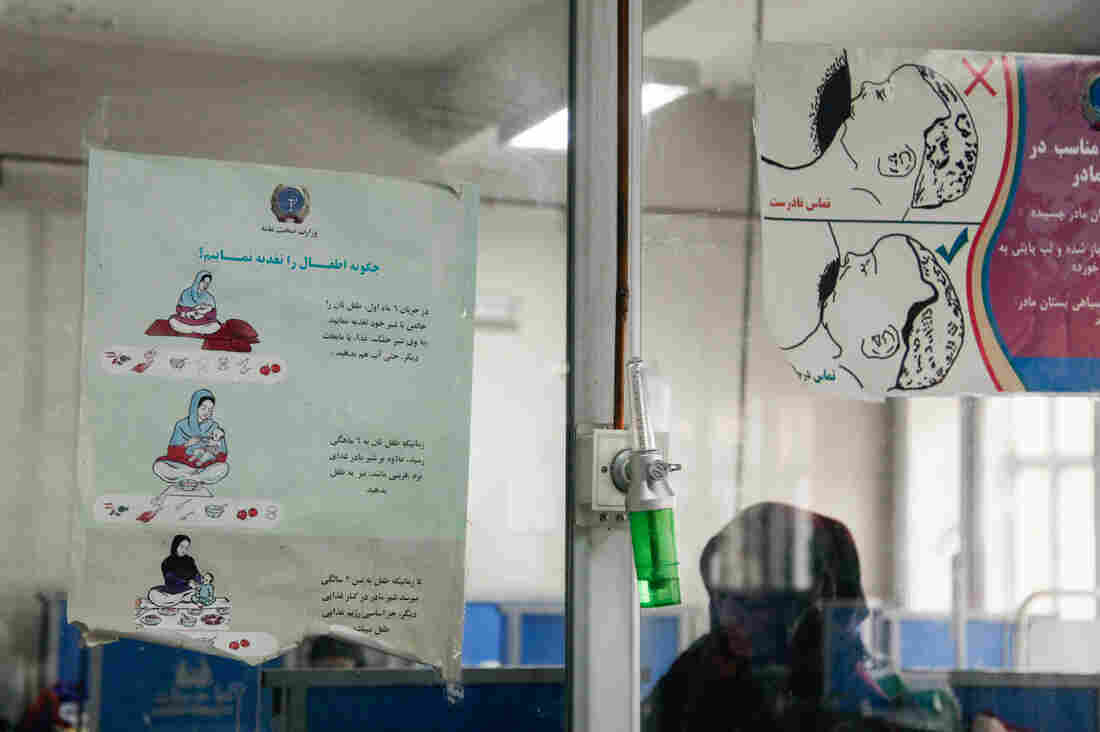 Two posters on the glass partition in a ward for malnourished children at the Indira Gandhi Children's Hospital in Kabul show the correct way to breastfeed a child. Proper, frequent breastfeeding is key to avert malnutrition among babies, but health workers say many Afghan women don't know that. Diaa Hadid/NPR hide caption

One midwife at the clinic, who could not be named for security reasons following Care International rules, said she saw about 35 babies every day with their mothers. Of those babies, she estimates that about six to 10 were malnourished.

Many of the most severe cases of malnourished babies are referred to the Indira Gandhi Children's Hospital in central Kabul, where, on a recent December day, women clad in burkas clutched swaddled babies as they waited to see a doctor.

Inside, grandmother Haji Rizva was here with her granddaughter Parvana. So was Zareena, 30, who watched over her fifth child, 1-year-old Fariba, who cried every time her mother put her down.

Zareena says for months, she was giving her daughter water mixed with non-dairy creamer. She says she thought it was cheap milk powder: she's illiterate and so is everybody around her. She also spooned her daughter the remains of vegetable stews and sometimes gave her bread and tea.

Her husband used to earn small change by hauling groceries for customers out of crowded bazaars, but the work dried up. Now, her oldest boy sells old plastic bags: other families buy them to burn for fuel. He's lucky to make $2 a day. Some days he brings home 50 cents.

Scenes like this jar with the sheer amounts that the U.S. spent in Afghanistan — some $2 trillion, according to Brown University's Costs Of War Project, which investigates how much the U.S. spent on the post-9/11 wars in Iraq and Afghanistan. Much of that spending was military-related, but Congress also appropriated nearly $138 billion since 2002 for Afghanistan's reconstruction. About a third of that was drained out by waste, fraud and abuse, according to the U.S. Office of the Special Inspector General for Afghanistan Reconstruction, which audits and investigates that spending. And yet that still leaves billions. So why are Afghans starving?

"It's a million dollar question, isn't it," says Heather Barr, co-director of the women's rights division at Human Rights Watch, who has done research in Afghanistan for the group. She says for years, international aid spending in Afghanistan was chaotic and largely focused on short-term goals. It wasn't meant to solve complicated problems like malnutrition, which isn't just about providing food aid. It must be addressed by other development efforts ranging from improved access to water to educating women about proper nutrition.

Diplomats meant to oversee programs often stayed no longer than a year. And as violence escalated, even good programs were thrown into disarray.

"The cumulative effect of all that is pretty disastrous. We have a country which has still got some of the worst development indicators in the world after an extraordinary amount of money being spent, but a lot of that money wasn't really spent on programs that could have led to real recovery," says Barr.

So of those nearly one million children who are starving, Galvin of UNICEF says the group hopes to help a third through food aid and medical treatments with the funding it has.

"The international community is largely done with Afghanistan," Barr says. So is America, she says. "There's just no realistic expectation that the U.S. is going to remain interested in Afghanistan, ready to continue bankrolling Afghanistan's deeply financially dependent government."

And already, kids like Parvana, who are lucky enough to be treated, face an uncertain future. Her grandmother Haji Rizva says when they go back home, Parvana will eat what they eat. But the cruel reality is that often, that's nothing at all.