Accessibility links
Mega-Survey Reveals The Pandemic's Impact On Standards Of Living In 9 Countries : Goats and Soda The responses reveal the impact on living standards in nine low- and middle-income countries — and may help governments find a way to help citizens most in need.

What A 30,000-Person Survey Reveals About Day-To-Day Life In The Pandemic

What A 30,000-Person Survey Reveals About Day-To-Day Life In The Pandemic 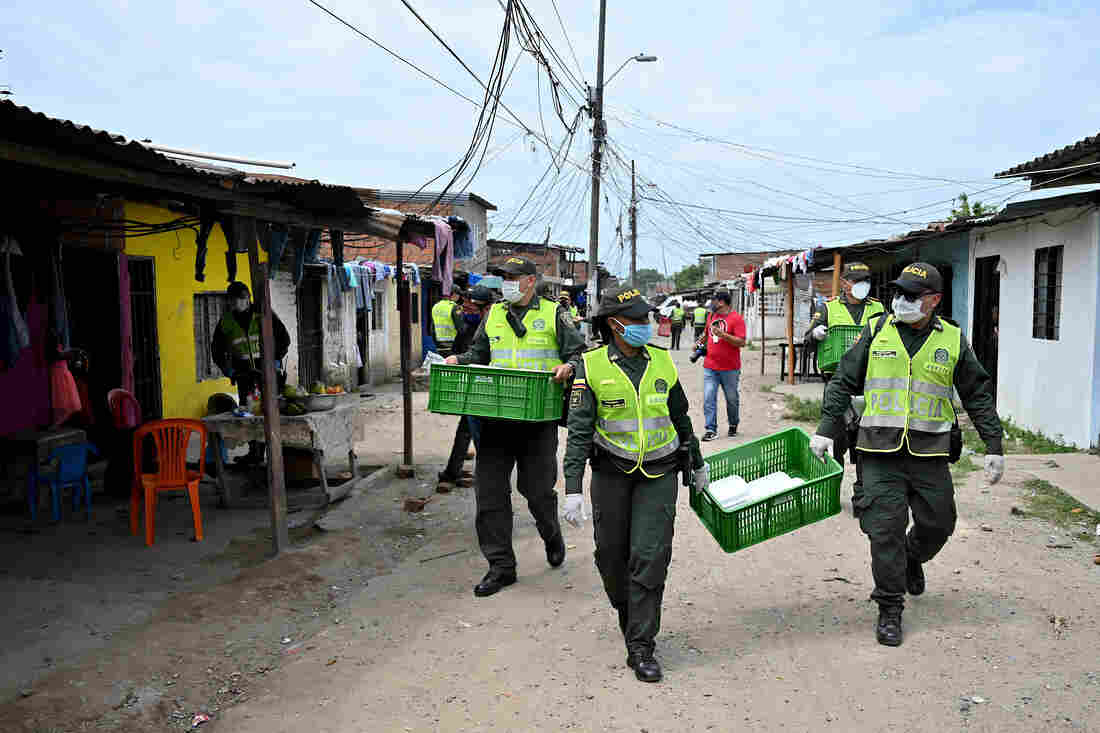 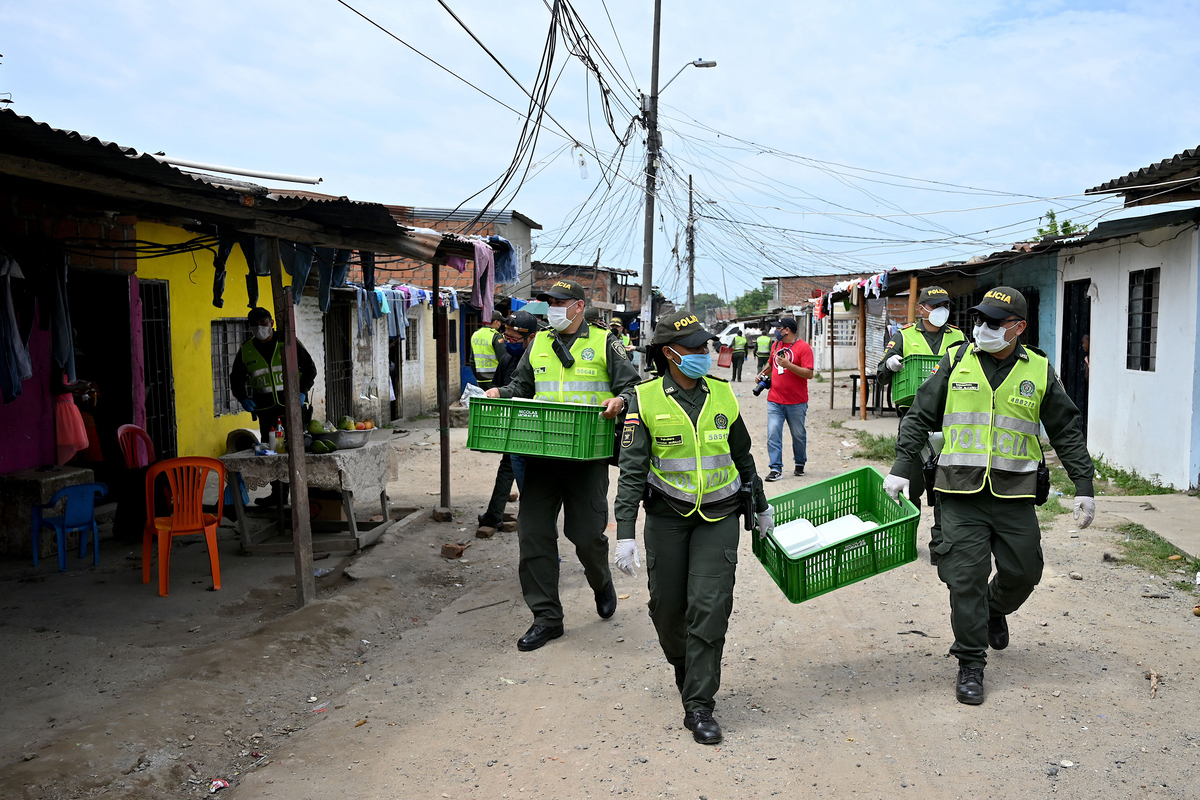 Police officers deliver lunch boxes in Cali, Colombia — a response to reports of hunger during the pandemic.

Everybody knows that the pandemic has had a chilling impact on people's daily lives.

But how bad is it? And in particular, how are people faring in countries that aren't as well-off as, say, the United States or European nations?

A study published in February in the journal Science Advances aims to provide some answers.

From April to July 2020, researchers collected data on the socioeconomic impact of COVID-19 from over 30,000 households in nine lower- and middle-income countries: Bangladesh, Burkina Faso, Colombia, Ghana, Kenya, Nepal, Philippines, Rwanda and Sierra Leone. In phone surveys using random numbers, researchers asked families in a range of income brackets how the pandemic has affected their jobs and income, their health, their ability to put food on the table and their children's education.

"It was important to capture the economic impact of COVID on [all economic classes]," says Shana Warren, a co-investigator of the report and a research scientist at Innovations for Poverty Action, a U.S. nonprofit organization that studies anti-poverty programs. She is one of 22 researchers from institutions across the globe who worked on the study.

"As we've seen in the U.S., it's not just the poorest Americans who have suffered. And the same is likely to have been true in lower- and middle- income countries. So we wanted to capture the full picture," she adds.

An analysis of those responses reveals a widespread decline in living standards across the nine countries. Fifty to 80% of respondents in Bangladesh, Burkina Faso, Colombia, Ghana, Kenya, Rwanda and Sierra Leone experienced a drop in income. 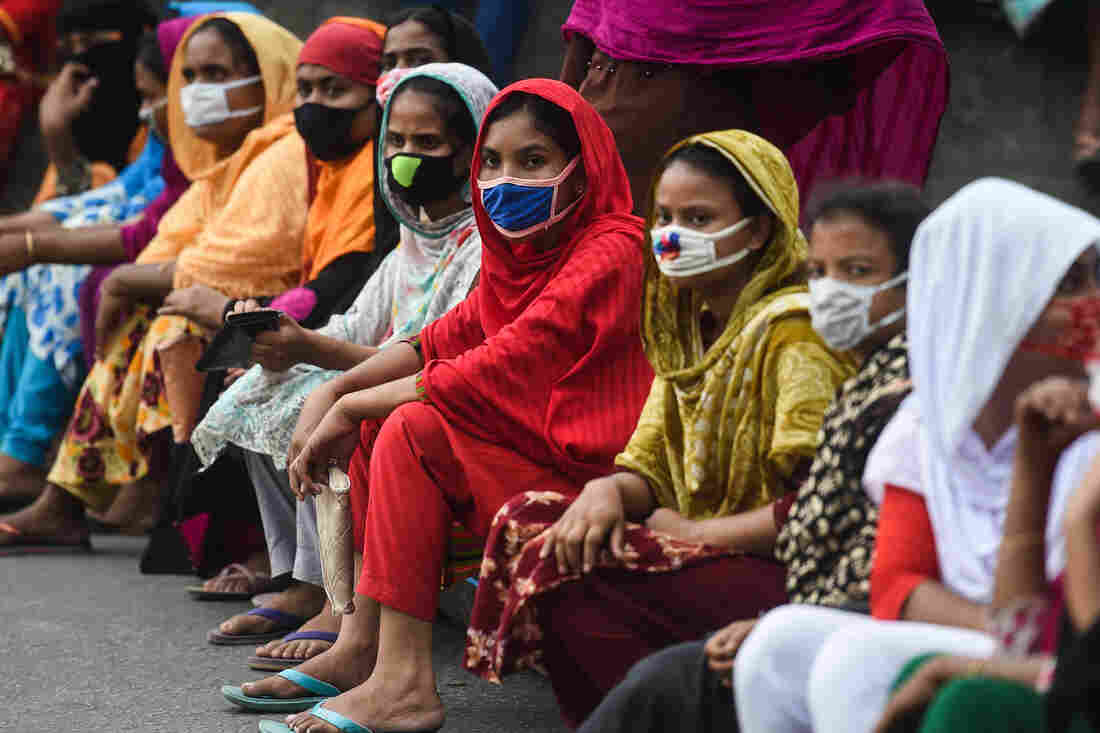 Workers from the garment sector block a road during a protest to demand payment of due wages, in Dhaka, Bangladesh, in April 2020. They claimed that factories had not paid them after retailers and brands cancelled orders due to worldwide lockdown measures. Munir Uz Zaman/AFP via Getty Images hide caption 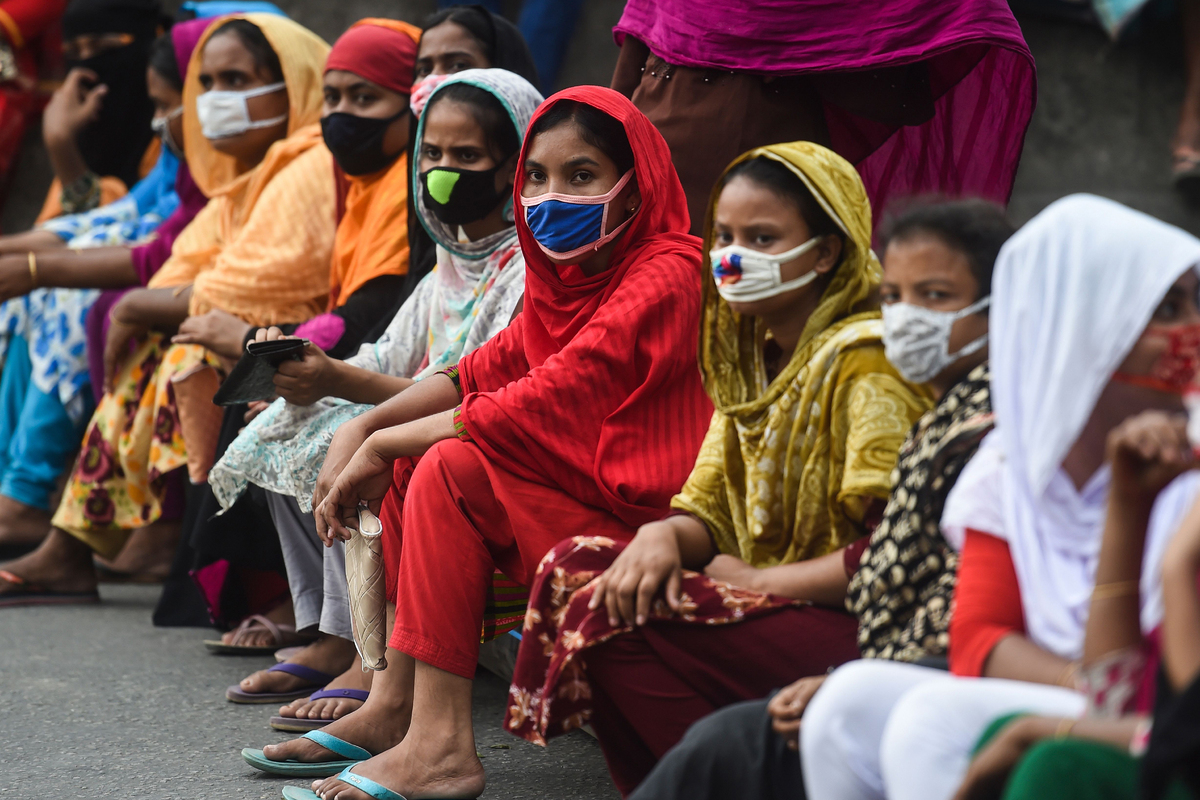 Workers from the garment sector block a road during a protest to demand payment of due wages, in Dhaka, Bangladesh, in April 2020. They claimed that factories had not paid them after retailers and brands cancelled orders due to worldwide lockdown measures.

The new report is "just telling you what the situation is on the ground right now. And in that sense, it's very much welcome," says Berk Özler, an economist at the World Bank's Development Research Group, who did not work on the study.

Here's a roundup of some of the key findings, and what they illuminate about poverty in the pandemic.

No time to prepare

The pandemic has been tough for everyone, says Warren. "When we looked at our data across income categories, we found people in the middle class also having to tighten their budget on food and facing unemployment risks."

However, she adds, "the poor within our samples were on average somewhat worse off."

In ordinary times, even the poorest people are able to make plans for periods of economic hardship, says Warren.

For example, during the lean season, when crops aren't being harvested, agricultural workers may turn to another job or borrow money from family members in cities or other countries.

Sometimes parents figure they'll skip a meal a day for a period of time so they can feed their kids.

"It comes every year at the same time and you plan ahead as best you are financially able," says Warren.

And they always know that the lean season eventually ends.

But the COVID lean season is different, she says. "This is not a slow burn of a recession. This happened really fast. What that means is that people don't really have time to have prepared for it."

With the pandemic, it's harder to find that backup, says Ashish Shenoy, a development economist and an assistant professor of agricultural and resource economics at the University of California, Davis, and a co-author of the report.

Jobs are harder to come by — and "coping mechanisms that people have, like turning to relatives for help to deal with unanticipated shocks, may not necessarily be helpful during this period because everyone's experiencing [the negative economic effects of the pandemic] at the same time," he says.

A mixed bag on hunger

The researchers found that the effects of the pandemic varied by situation and population. Take hunger for example.

"We didn't see Rohingya refugees in the world's largest refugee camp in Bangladesh suffering as much from hunger as you might expect," she says. "It is perhaps that they had a relatively stable source of food arriving from aid organizations."

Among children, missed meals were likely due to school closures. "Many children get an additional meal or two meals per day through World Food Programme efforts and school feedings," says Warren.

Some families could not afford food due to skyrocketing food prices. In Bangladesh and Nepal, says Shenoy, "goods are also having trouble moving [due to pandemic travel restrictions]. And so food prices have also gone up in many places, especially foods that are imported from other regions," including necessities such as powdered milk, lentils and oil, he says. With incomes falling, people are not able to afford food with higher prices.

The researchers are worried about the long-term effects of the economic crisis spurred by the pandemic, which can play out in a number of ways. 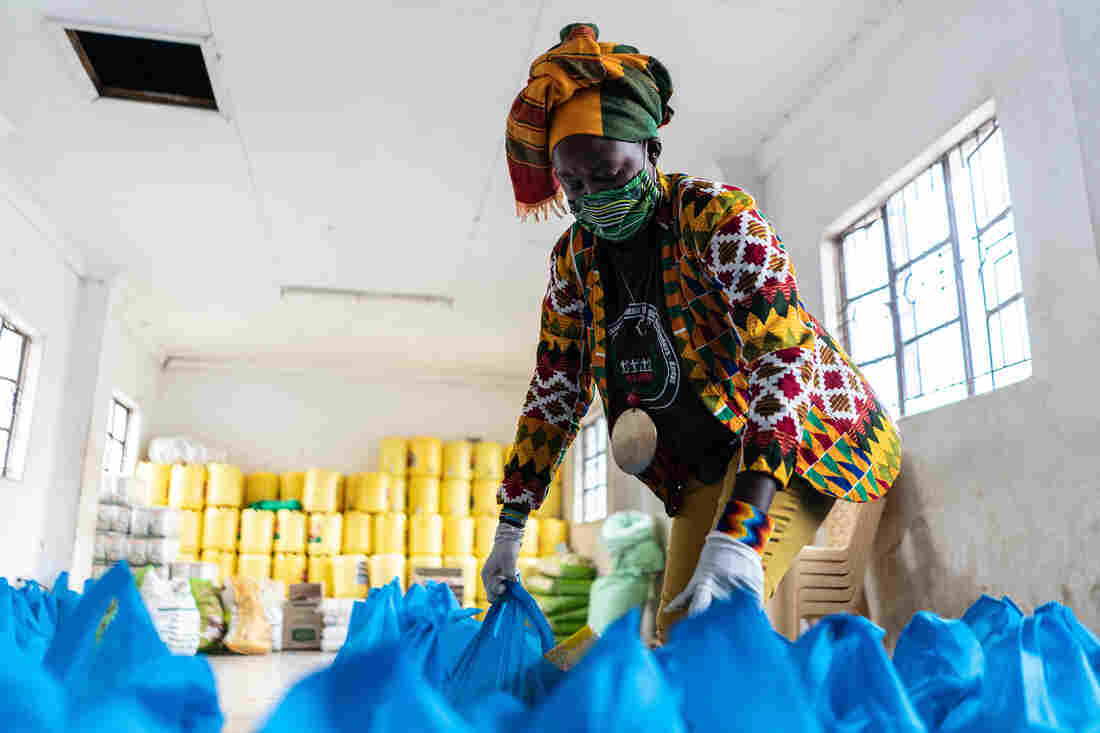 Rachael Mwikali from the Coalition for Grassroots Human Rights Defenders Kenya prepares bags of food aid in April 2020. The group is distributing them to families in Nairobi who have lost their income due to COVID-19. Fredrik Lerneryd/AFP via Getty Images hide caption 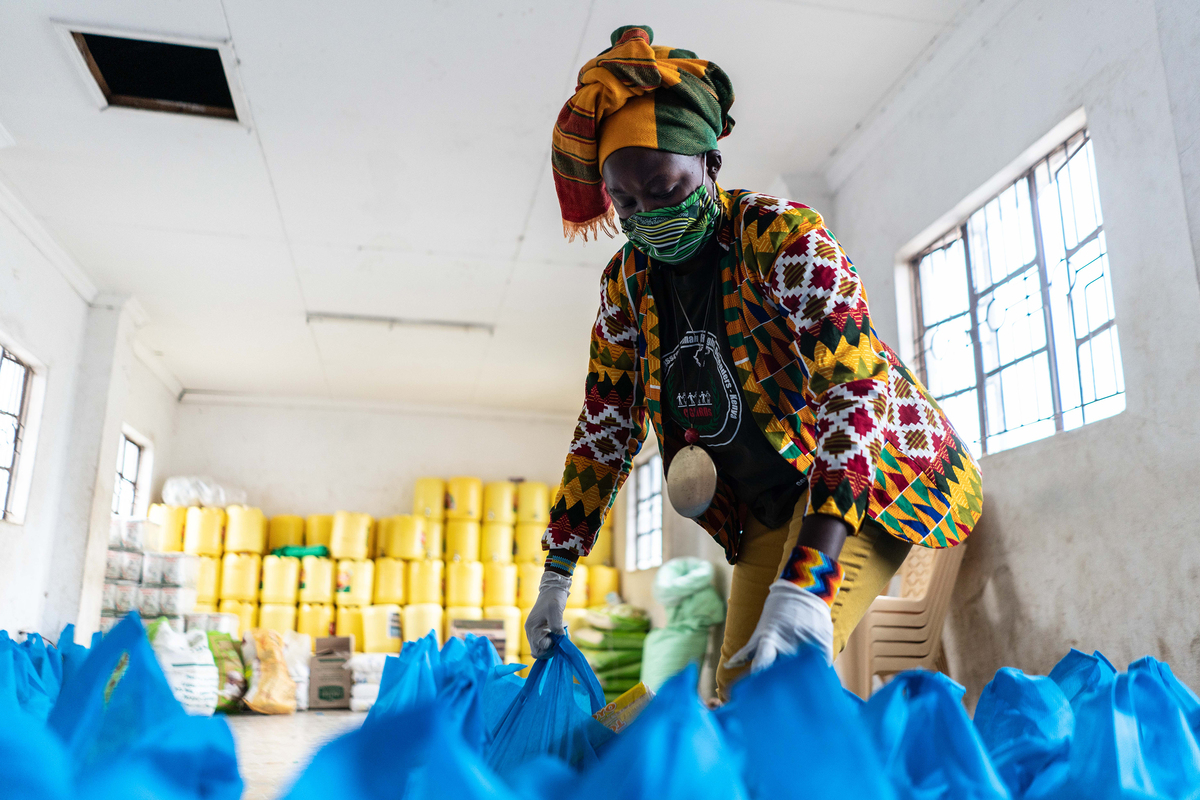 Rachael Mwikali from the Coalition for Grassroots Human Rights Defenders Kenya prepares bags of food aid in April 2020. The group is distributing them to families in Nairobi who have lost their income due to COVID-19.

The study found that many households were unable to meet basic nutritional needs. According to the surveys, 48% of rural Kenyan households were forced to miss meals or reduce portion sizes to cope with the crisis, along with 69% in rural Bangladesh and 87% in rural Sierra Leone.

"When children don't eat enough, they don't grow properly. There are critical windows for growth, and [malnutrition] has a long-term health impact," says Warren. "We will see the repercussions of this for quite a long time."

In addition to hunger, Warren points to some of the worrying trends that the researchers have found regarding health care.

"In Colombia, over 40% of respondents, whether they're high-income or low-income, were avoiding or unable to attend health care visits. Some of this is due to lockdowns and lack of transportation. Some of it is an inability to afford health care," she says.

If people are "forgoing health care treatments they would otherwise need" now, it may create more serious health problems for those individuals down the road, explains Shenoy.

He understands that families are just trying to cope financially by making these tough choices — "but there's a concern that doing these things will cause their economic fallout to last even longer," he says.

Data in hand, the researchers would now like to see governments take action. "If we expect people to continue to curtail their daily lives to control the pandemic, we really would like to see a more robust social safety net in place for them," says Warren.

As the findings came out, the researchers shuttled the data over to governments. "We worked immediately to share it with the countries concerned and other local partners who were in a position to act," she says.

Officials in Colombia are currently using the data to better target and deliver existing cash transfer programs. And in the Philippines, program officers say the survey is helping them figure out what kinds of social welfare citizens need most.

The Pandemic Pushed This Farmer Into Deep Poverty. Then Something Amazing Happened

The authors of the study have also signed a letter calling on countries, policymakers and international aid organizations to take action to mitigate the crises of poverty and hunger. "We're urging them to provide immediate economic relief to people around the world whose livelihoods are hurt by COVID-19," says Shenoy.

It's not impossible, says Özler of the World Bank.

"Developing countries have had the ability to roll out social protection programs [such as cash aid] entirely virtually. Togo has done this. Namibia has done this. Brazil and South Africa have done this with varying success," he says. If these countries can do it, "lots of other countries can, too."