Accessibility links
Median Ages Across NPR Platforms : Go Figure NPR listeners have different age profiles depending on how they listen.

It's sometimes shocking to think back to just over six years ago when I joined NPR.  I owned an MP3 player that could hold around 12 songs and had a cell phone that had the killer one-two punch of a pull-out antenna and dual-tone screen.  I considered myself on the cutting edge of modern mobile technology.

Needless to say, the media world has changed quite a bit since then, and the ways in which NPR programming is distributed has changed right along with it. Tuning in to one's local NPR station on an AM/FM radio remains far and away the most popular way people listen to NPR, but now there are also millions of people who listen to and read stories here on NPR.org, on a mobile phone browser or one of two mobile phone apps, via downloaded podcasts that they take with them on portable devices or on their shiny new iPads.

Part of our job in Audience Insight & Research is to find out just who these people who use these new platforms are. One of the most striking differences we observe when we do this is the difference in age between the users of these different platforms. 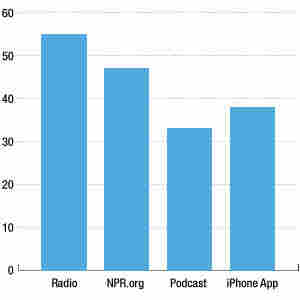 The median age of NPR radio listeners-- according to radio ratings provider Arbitron-- is 55.  This is a number that we have seen climb steadily in the last few years.  George Bailey of Walrus Research published a report on the "The Aging Audience" last year on just this topic.

When one looks to the web, however, the median age drops to 48 among NPR.org users.  NPR.org, of course, is not used by all NPR listeners any more than ESPN.com is used by all viewers of ESPN or CNN.com is used by all viewers of CNN.  Only those listeners-- and, largely, those non-listeners-- for whom the site meets a need are NPR.org users, and the effect of this is an audience that is a full seven years younger than the radio audience.

That difference becomes even more dramatic when we look at mobile platforms.  Users of the NPR News iPhone app have a median age of 38 and podcast listeners are the youngest slice of the audience at 33-- a full 22 years younger than the radio audience.

It's important to point out that these groups are, for the most part, subsets of the radio listening audience.  Podcast listeners, for example, are still overwhelmingly comprised of people who also listen to NPR on the radio.  Most of these age differences reflect different lifestyles and media habits between age groups, not some unique value proposition with respect to the content. Despite how someone accesses NPR, they tend to be drawn to it for the same reason: a curiosity about the world around them.