Space Is Tight In Space

Space Is Tight In Space 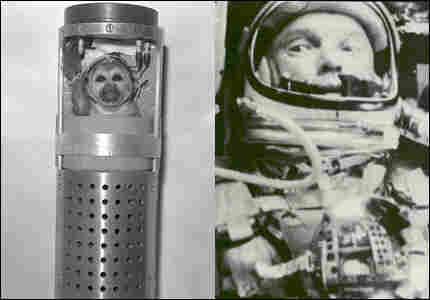 The story by NPR's Nell Greenfieldboyce yesterday, on the 50th anniversary of the first U.S. animals to fly and survive a space flight is drawing a lot of comment from listeners. Many rightly point out that there's a big difference between a man or woman volunteering for such a mission, and a monkey getting volunteered.

But the photo of the little squirrel monkey, Baker, also brought to my mind another iconic photo of one of the first astronauts in NASA's Mercury program.The human quarters for those missions, just a few years after the monkey flights, were cramped, too.

The "Man in the Can," some insiders called the program. As John Glenn, the first American to orbit the earth, joked to Time Magazine in 1962, "you don't get in [the Friendship 7 capsule], you put it on."

In a long distance chat with the international space crew in 2002, Glenn was more specific. The online publication Space.com caught the moment:

Checking the statistics, Glenn noted that his Friendship 7 capsule had 50 cubic feet (1.4 cubic meters) of space--or about as much room as the trunk of a large luxury car.

You can check out the Friendship 7's space constraints yourself at the Smithsonian National Air and Space Museum.